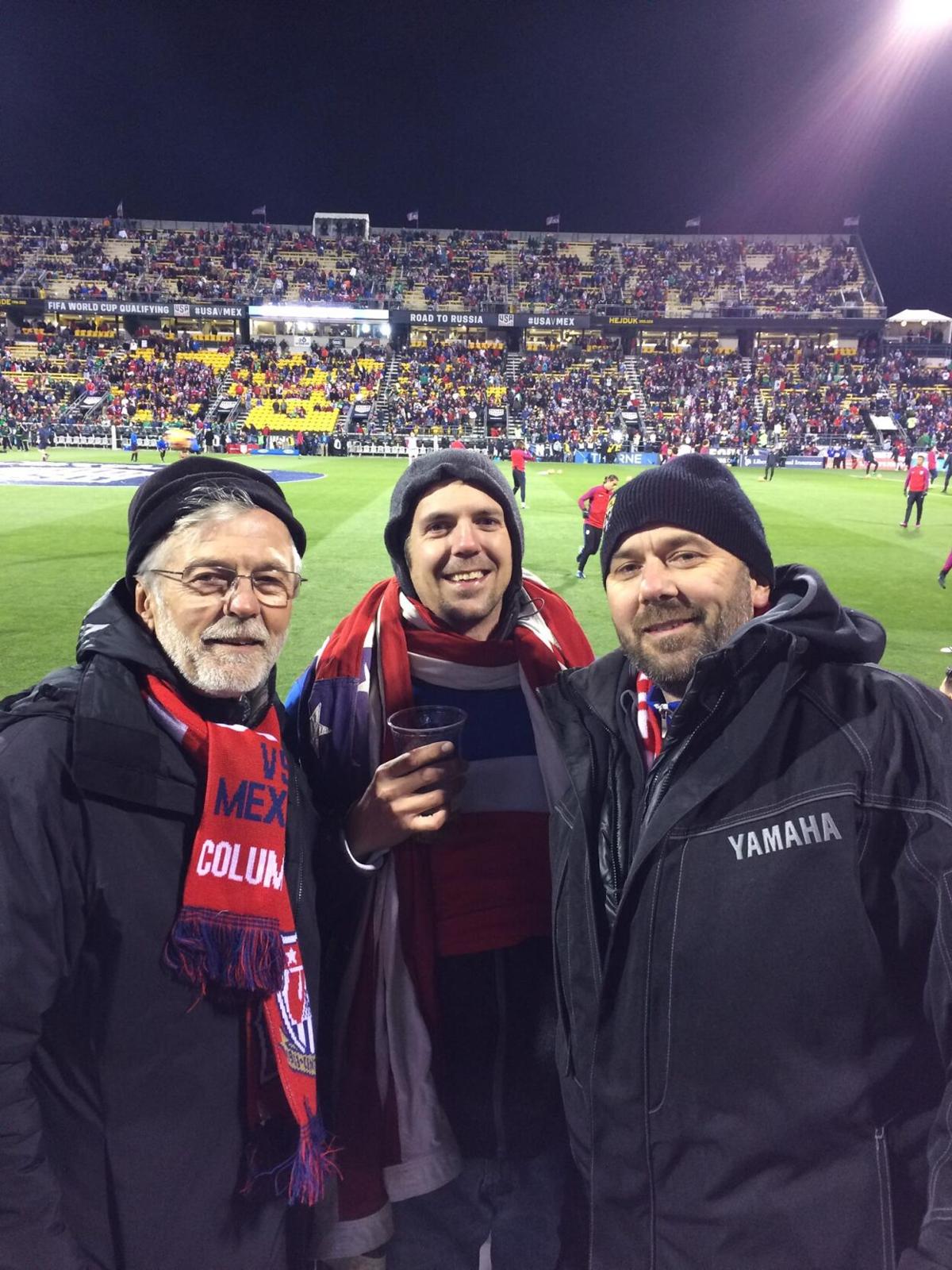 Denis, Adam and Matt Fox at a USA vs Mexico World Cup Qualifier in Columbus 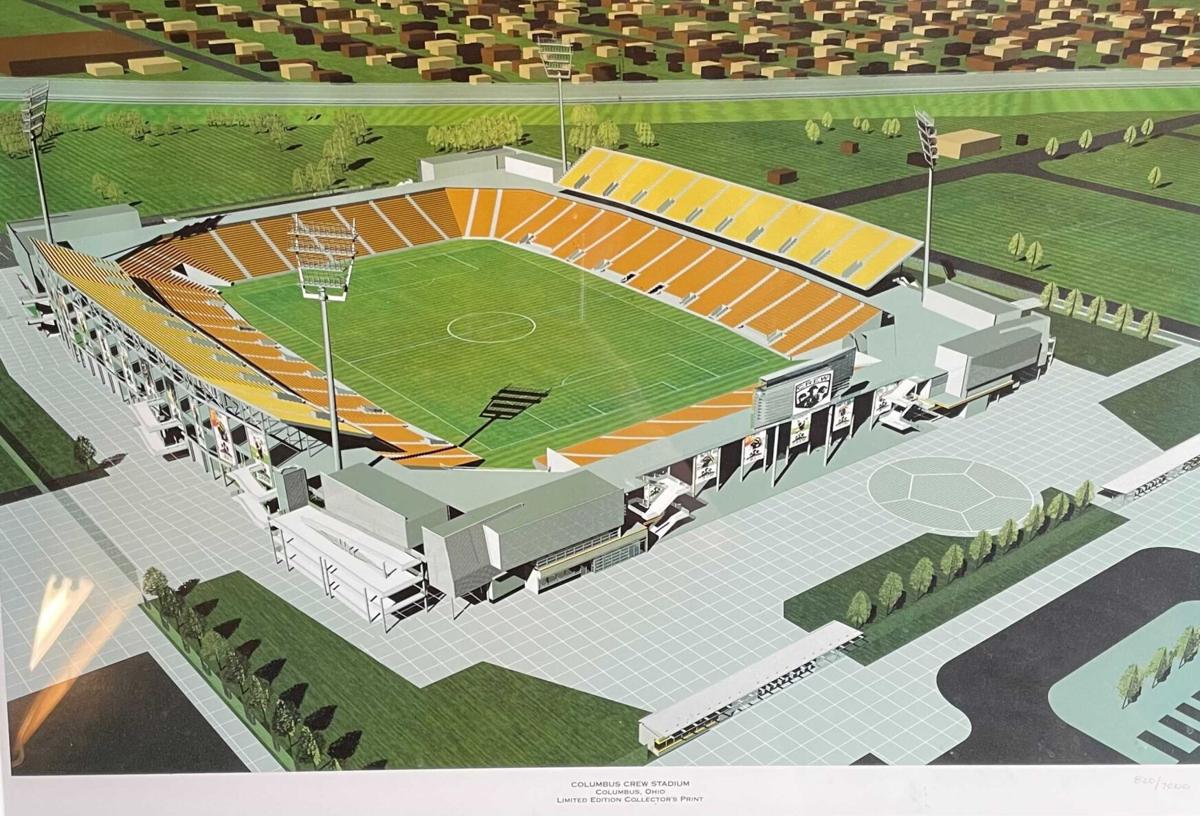 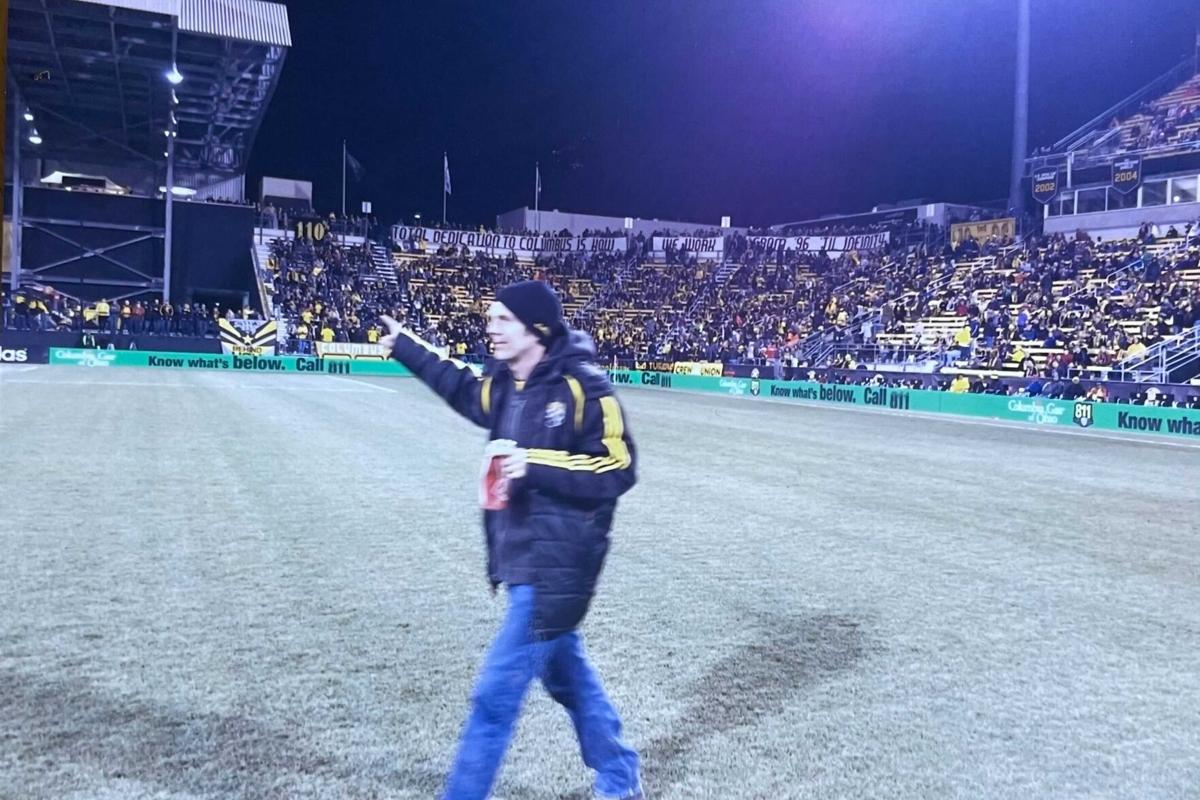 COLUMBUS -- Major League Soccer (MLS) is in its 25th season and continues to “drive on the roads that Columbus paved.”

The MLS Cup final is Saturday at 8 p.m. at Columbus Crew Stadium (I’ll never call it Mapfre) where the Crew are looking for their second title, hosting the defending champion Seattle Sounders FC.

A quarter century in, there couldn’t be a more fitting venue to host the final than the first pro, soccer-specific stadium in the United States. You see new soccer arenas being built left and right, the league continues to expand and will be at 30 teams in 2023.

But over two decades ago the league almost folded numerous times.

The Crew was a charter member of Major League Soccer and played the first three years at Ohio Stadium, beginning in 1996. While the lower bowl of “The ‘Shoe” was packed, there were still 70,000 empty seats. The 10 existing MLS teams played on football fields that were re-lined for soccer. 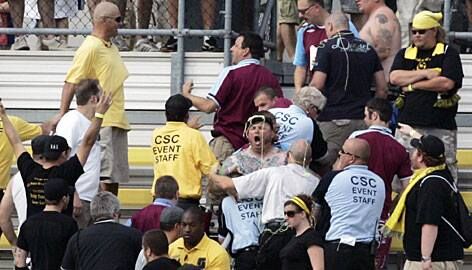 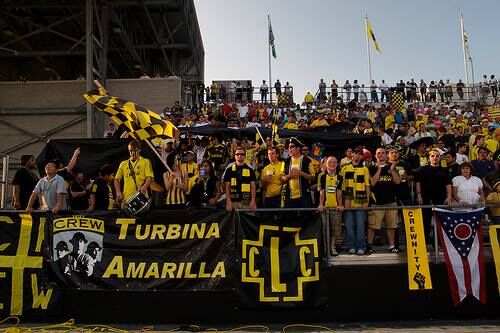 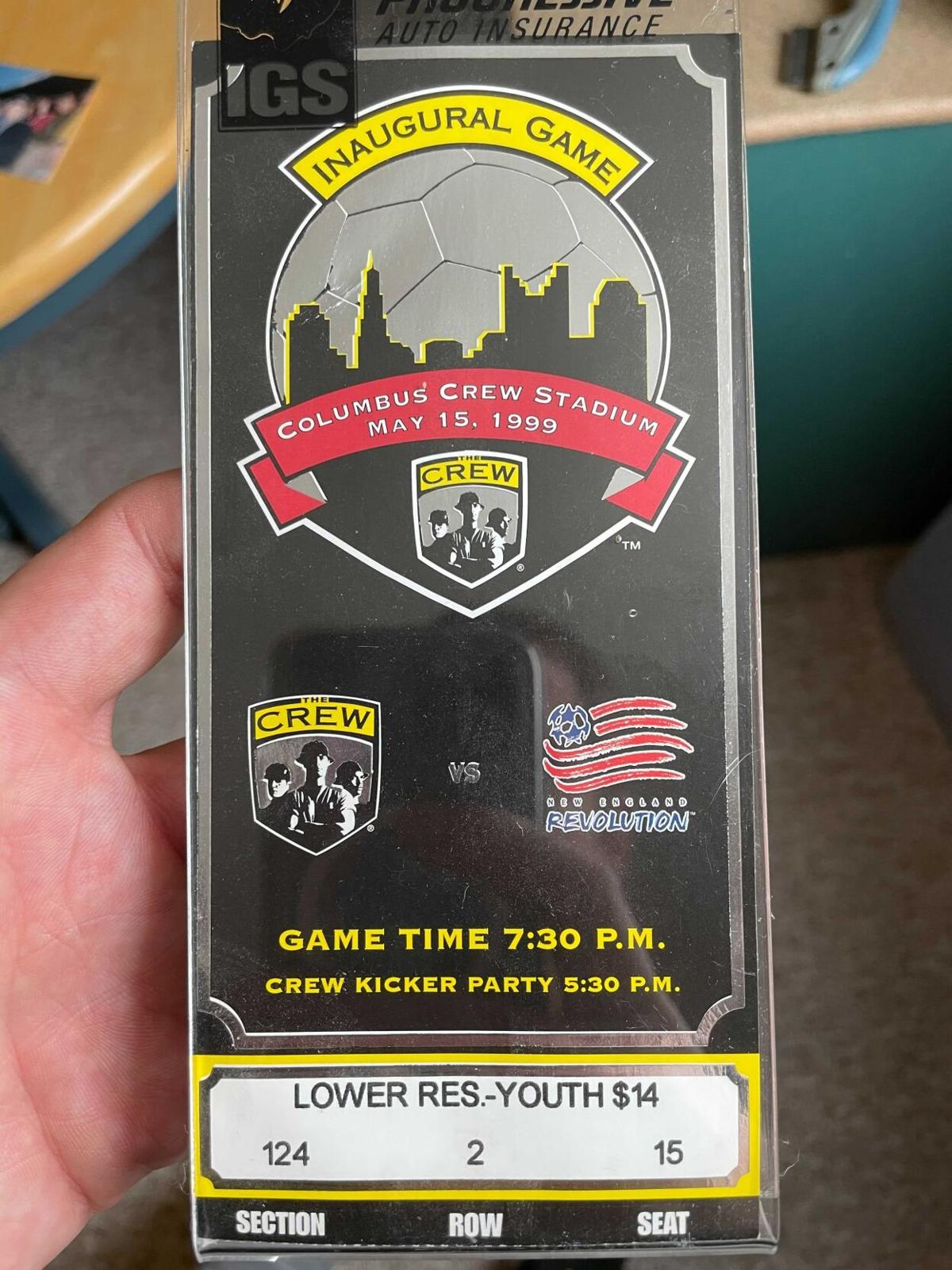 Fox's ticket to the first every Columbus Crew game. Can you imagine paying $14 to sit in section 124, Row 2, to watch the Buckeyes? 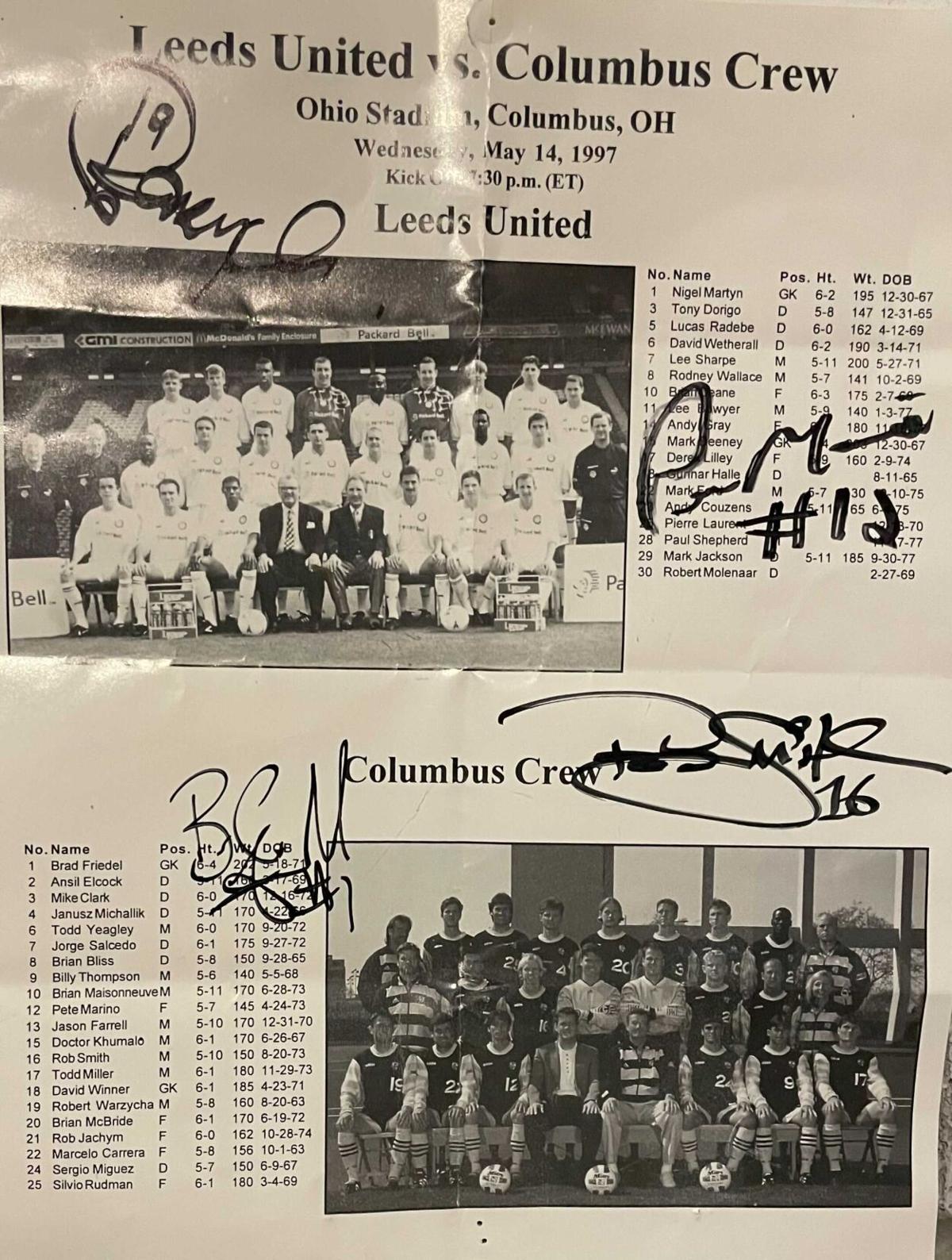 Early day friendlies against EPL squads, where the Crew would get routinely embarrassed by their B squads. 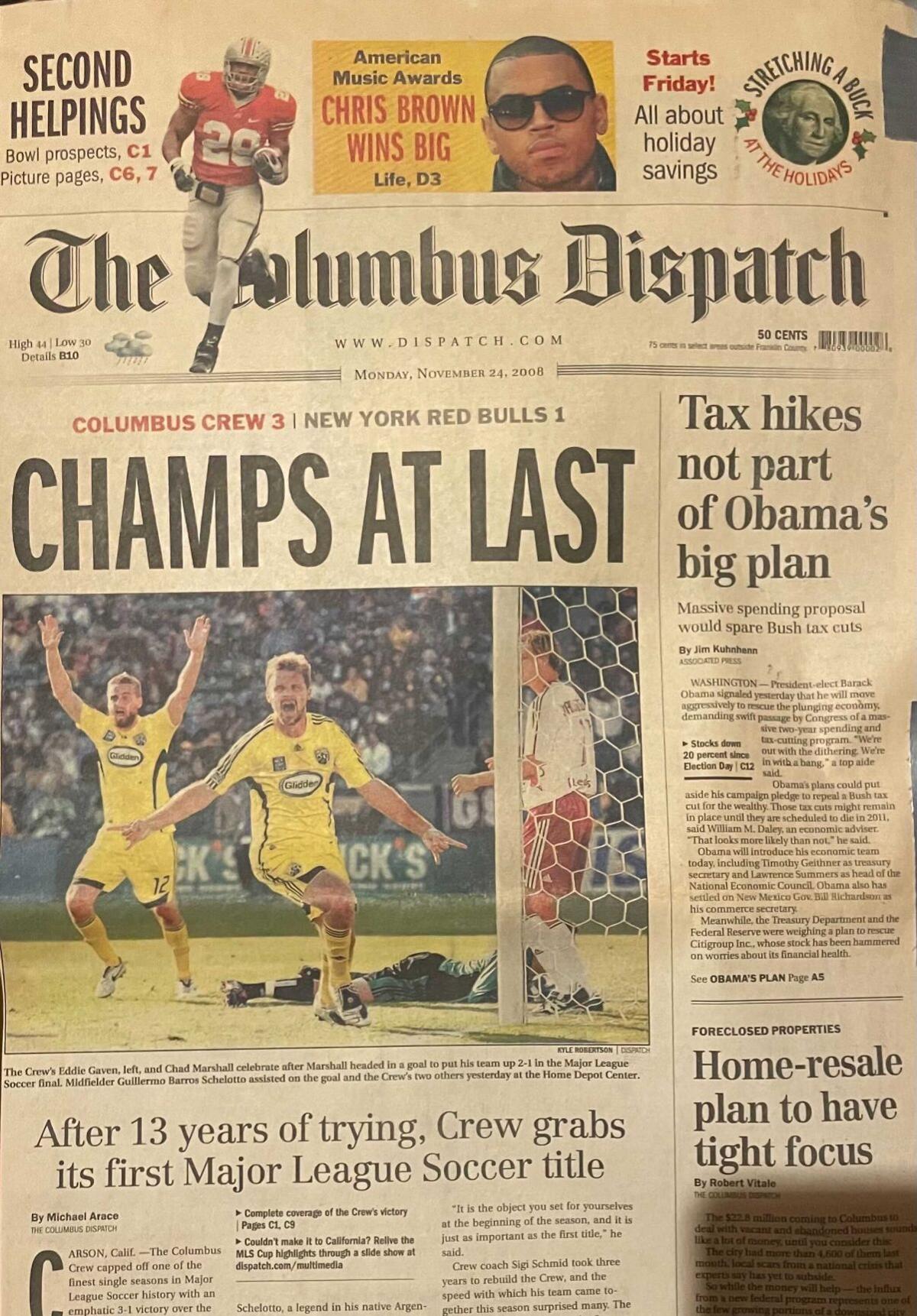 You'll have to print out a screen shot if you want the same MLS Cup souvenir after Saturday's match. Courtesy of the Columbus Dispatch 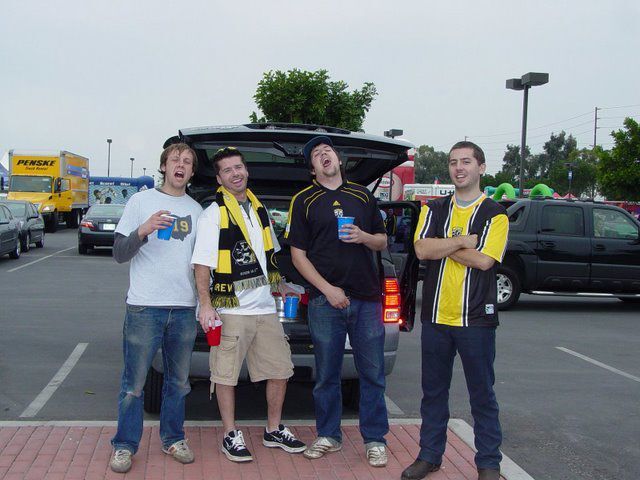 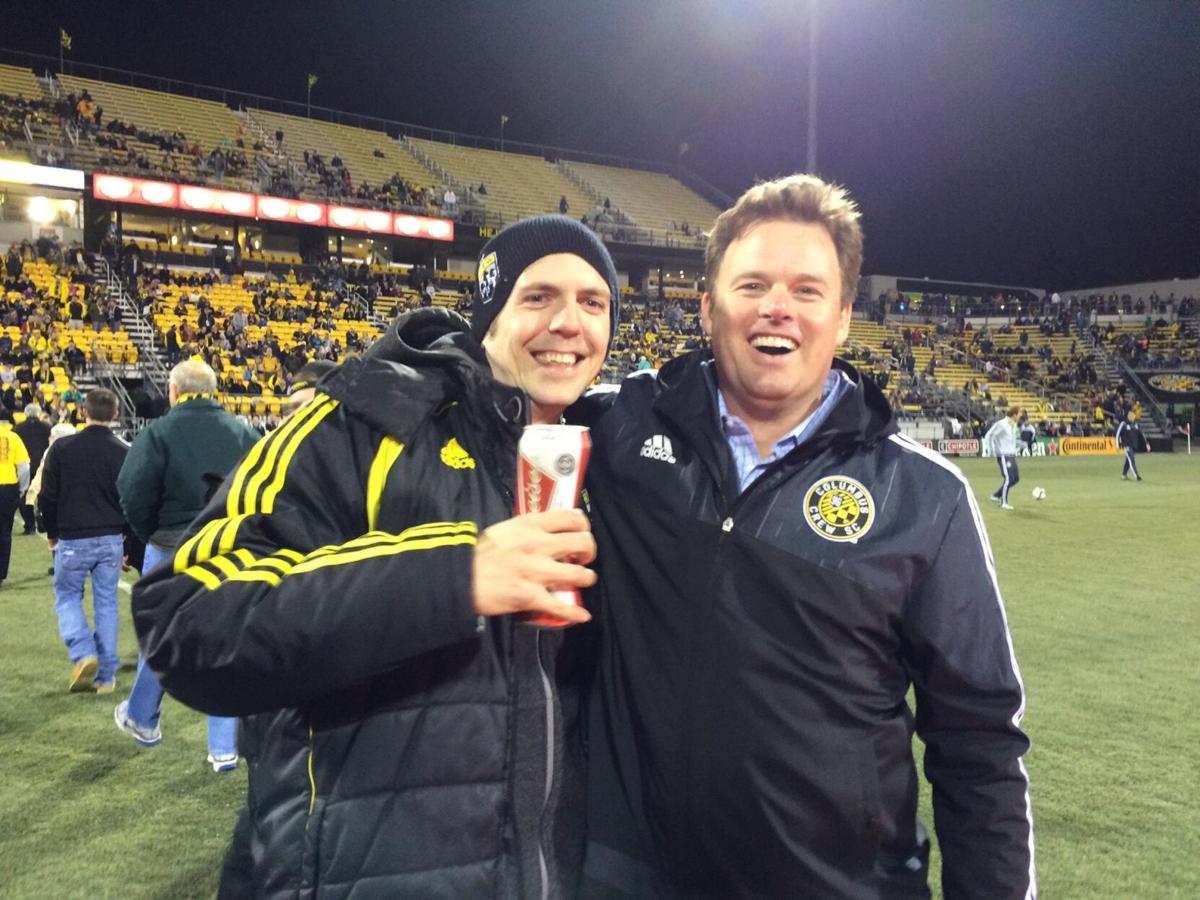 Adam Fox with slimy owner Anthony Precourt before Fox realized his snake motives to move the Crew to Austin. 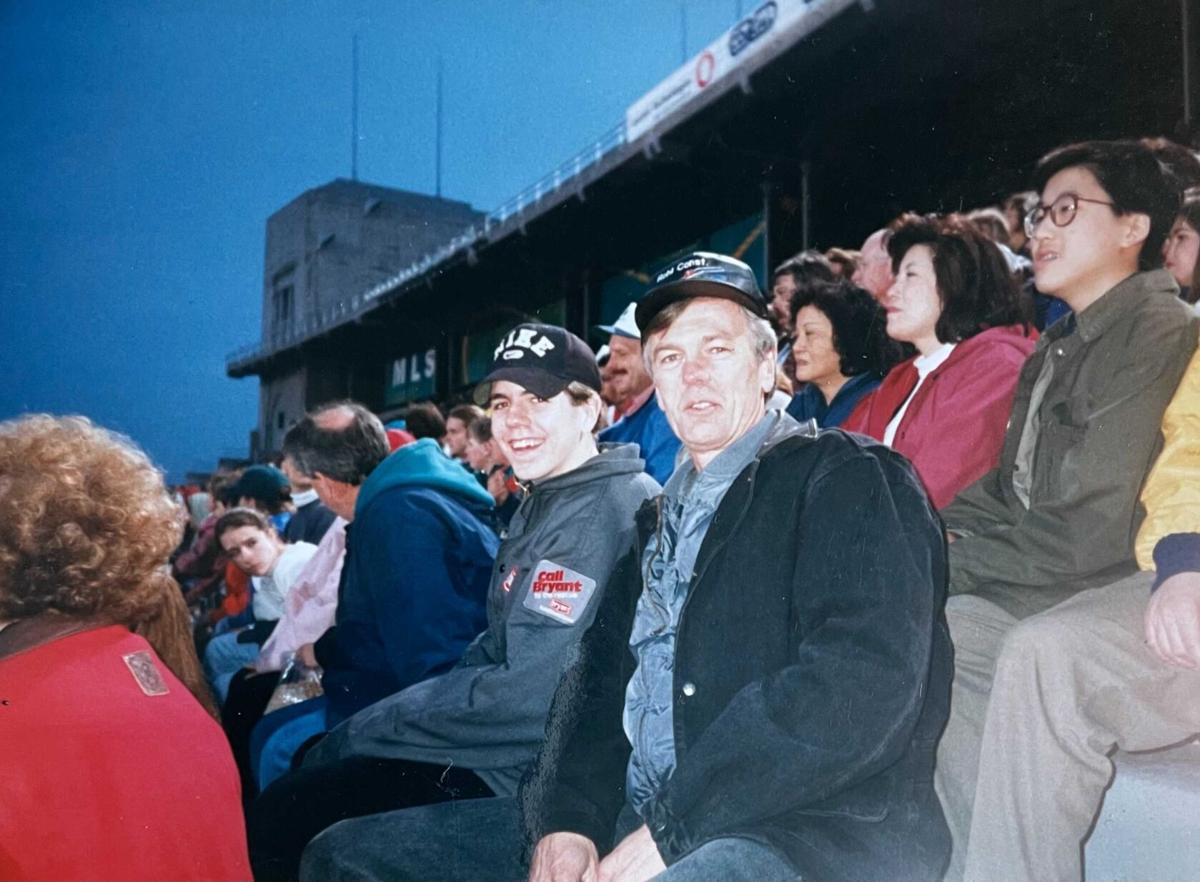 Gallery: Crew through the years

Fox's ticket to the first every Columbus Crew game. Can you imagine paying $14 to sit in section 124, Row 2, to watch the Buckeyes?

Early day friendlies against EPL squads, where the Crew would get routinely embarrassed by their B squads.

You'll have to print out a screen shot if you want the same MLS Cup souvenir after Saturday's match. Courtesy of the Columbus Dispatch

Adam Fox with slimy owner Anthony Precourt before Fox realized his snake motives to move the Crew to Austin.

Crew founding owner Lamar Hunt, for whom the U.S. Open Cup is named and of NFL fame, knew that if the league was going to flourish, teams needed their own training grounds and stadiums not shared with college and pro football teams.

Hunt used his own money to finance the $28.5 million in construction costs and named it “Columbus Crew Stadium.” Sure, the late Hunt could have sold the naming rights, but he had the vision (and being a billionaire helped) to know the impact the grounds would have on the future of soccer.

On May 15, 1999, while the Crew was thrashing the NE Revolution 2-0, I remember looking around the stands and thinking a pro league might actually survive.

In 2001, MLS was only 5 years old, and the U.S. Men’s National Team was looking for a venue to host the biggest game that they play every four years -- the World Cup Qualifier (WCQ) against hated rival Mexico.

The Mexican National Team had grown accustomed to smashing the U.S. and played at Azteca Stadium to 87,000 chanting, rabid fans. They thought it was cute that the Yanks finally had their own little stadium.

It would forever be known as, “La Guerra Fria,” the cold war, as late February in Ohio can make for a beyond frigid contest.

When I looked around the stadium, it was 85% Mexican fans. And the whole place fell silent when the U.S. scored its second goal. That infamous 2-0 scoreline became a rallying cry for the U.S. team, as they went on to the World Cup the next year and made it to the Elite 8, the best run since getting third in 1934.

The U.S. finally had a home venue in Columbus Crew Stadium and four years later in 2005, the Mexican fans again found themselves crying to the chants of “dos a cero.” The attendance split was 50-50 that time and towards the end of the game I bought a beer for an “El Tri” supporter that I had been going back and forth with during the match.

He threw the beer in my face. Lesson learned.

Capping the complete domination of Mexico at Crew Stadium, the 2013 WCQ was exactly the same, a “dos a cero” victory over Mexico. That’s all we chanted all night: “dos - a - cero, clap, clap, clap-clap-clap.” The U.S. even missed a penalty late in the game to keep the iconic scoreline going.

My father made sure we were Crew season ticket holders from the start, so we were always able to get tickets and we went to all four “dos a cero” games.

It was the hashtag heard around the soccer world, as legendary coaches like Jurgen Klopp held up signs of support and teams, players, owners and fans rallied around keeping the Columbus Crew where they belonged, in Columbus.

Ohio fans knew all-to-well what it was like to have their team ripped from them and moved to another city, like Art Model did when he moved the Browns to Baltimore.

Slimy owner Anythony Precourt bought the Crew with the intention of moving them to Austin, Texas, where his oil empire was already set up. Just like in the movie, “Major League,” Precourt wanted a mass tanking to justify the move. The marketing and game promotions slid, the stadium was allowed to deteriorate, the Crewziers dance team was eliminated, no big money was spent on players and team performance dropped. Predictably, so did attendance.

Browns owners Jim and Dee Haslam stepped in to buy the Crew once it became apparent, from both a legal and fan perspective, that moving the Crew simply wasn’t going to happen -- the team meant too much to the soccer world.

Crew fans have been here before -- in 2015 Columbus hosted the MLS Cup final and were Vegas locks to lift the trophy as in 2008. Unlike 2008, I was going to be able to take my son and couldn’t wait for him to see a championship in the city that paved the way for the sport in the U.S.

And then 27 seconds into the match, Crew goalie Steve Clark failed to clear the ball, smashed it into a Portland Timbers player and the Crew could never recover. (Timbers second goal was out of bounds as well but enough crying from me.)

Now, the defending MLS champion Sounders are coming to town and it’s looking to be another cold war. But don’t forget the Sounders owe a lot of their success to the Crew.

The expansion team of Seattle had a lot of initial investment money. In 2009, their first year in MLS, lured the best coach the league had ever seen -- Sigi Schmid, to their club. (The MLS coach of the year award is named after Schmid, who died in 2018.)

Crew fans were devastated as he was their coach! Not only that, in 2008 he had just won the double with Columbus -- the Supporters Shield (best regular season record) and MLS Cup. That was a pretty good coaching foundation for the Sounders.

Plus, in order to help with all the expansion, there was an expansion draft. So every year, because Columbus had so many solid players, they would lose teammates to other clubs.

Not only did Seattle get the Crew’s coach, but also their star midfielder Brad Evans.

If Columbus didn’t suffer through the early MLS years, where clubs failed, names changed (Do you realize Kansas City called themselves “The Wiz” for the first years?), there was no money from the TV deals, playing on turf football fields, an absurdly low salary threshold, bizarre shootout rules, designated players, etc., then Seattle and the 20 other teams that came after the Crew, couldn't have survived and that now, are thriving.

On Saturday night, the soccer world says goodbye to Crew Stadium in the big-game format. The new stadium is under construction and will open mid-season next year.

This is the last chance to send Crew Stadium and the team that built the league off on the right note. It’s time for redemption, revenge and slapping respect back into the mouth of the league. Saturday is title time in Columbus.