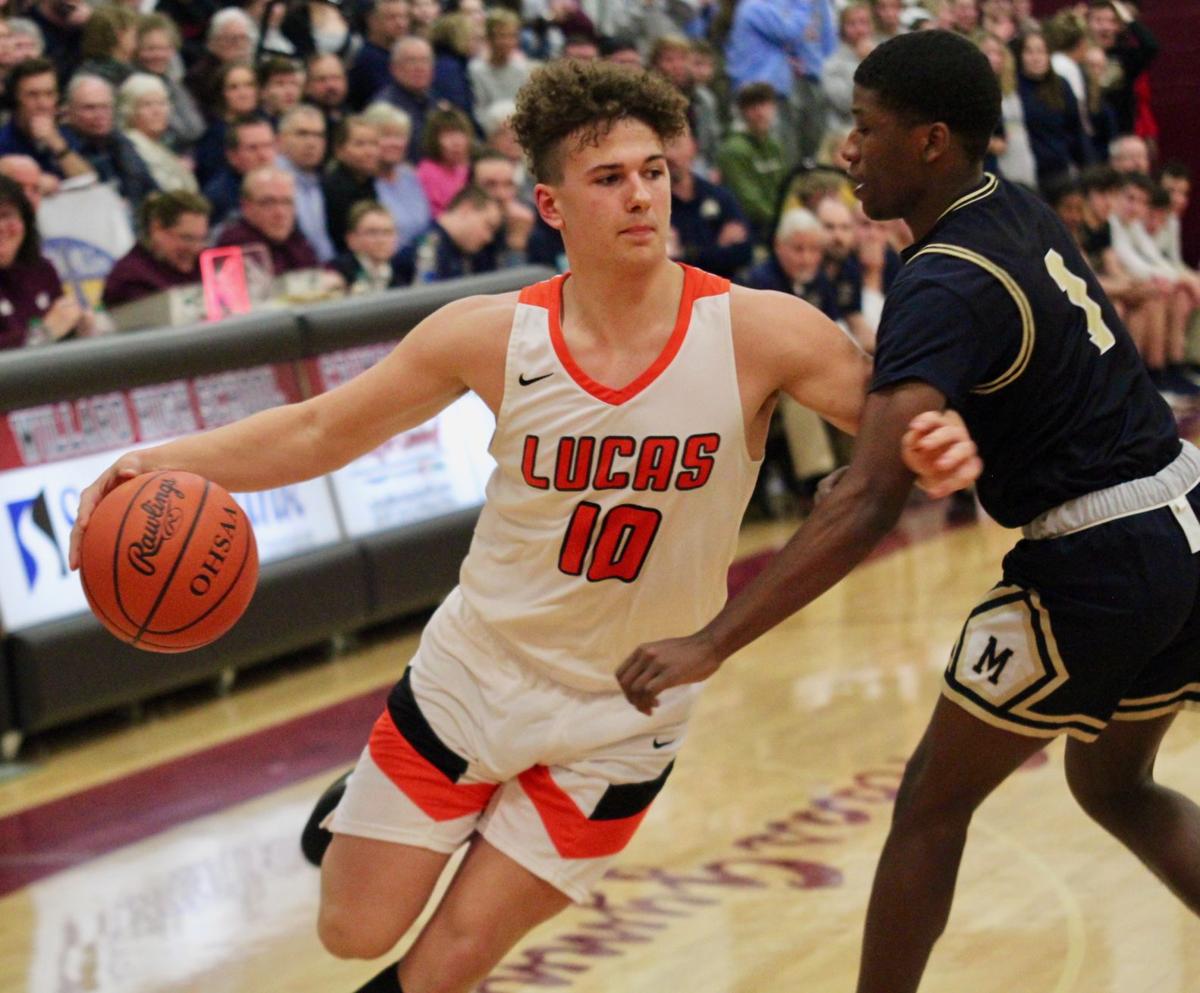 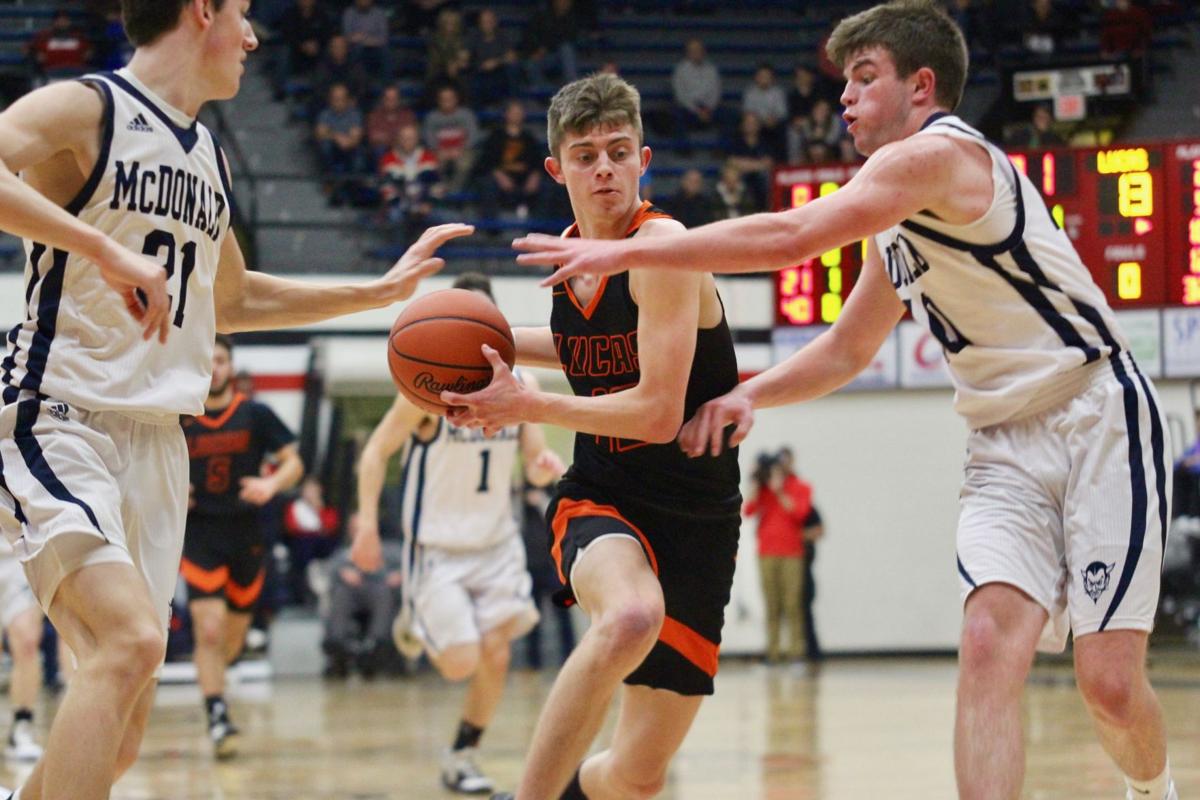 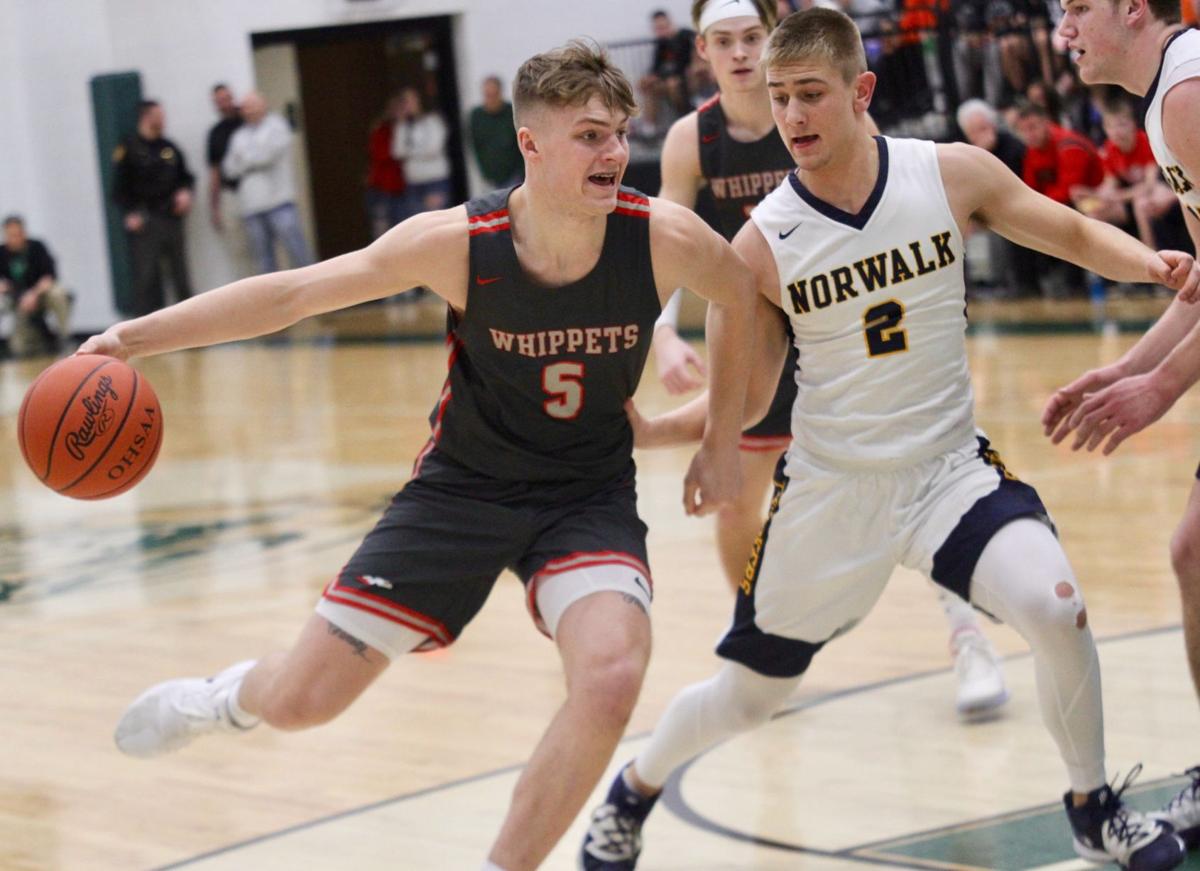 Shelby's T.J. Pugh drives to the basket against Norwalk in the Division II district semifinals at Madison Middle School. 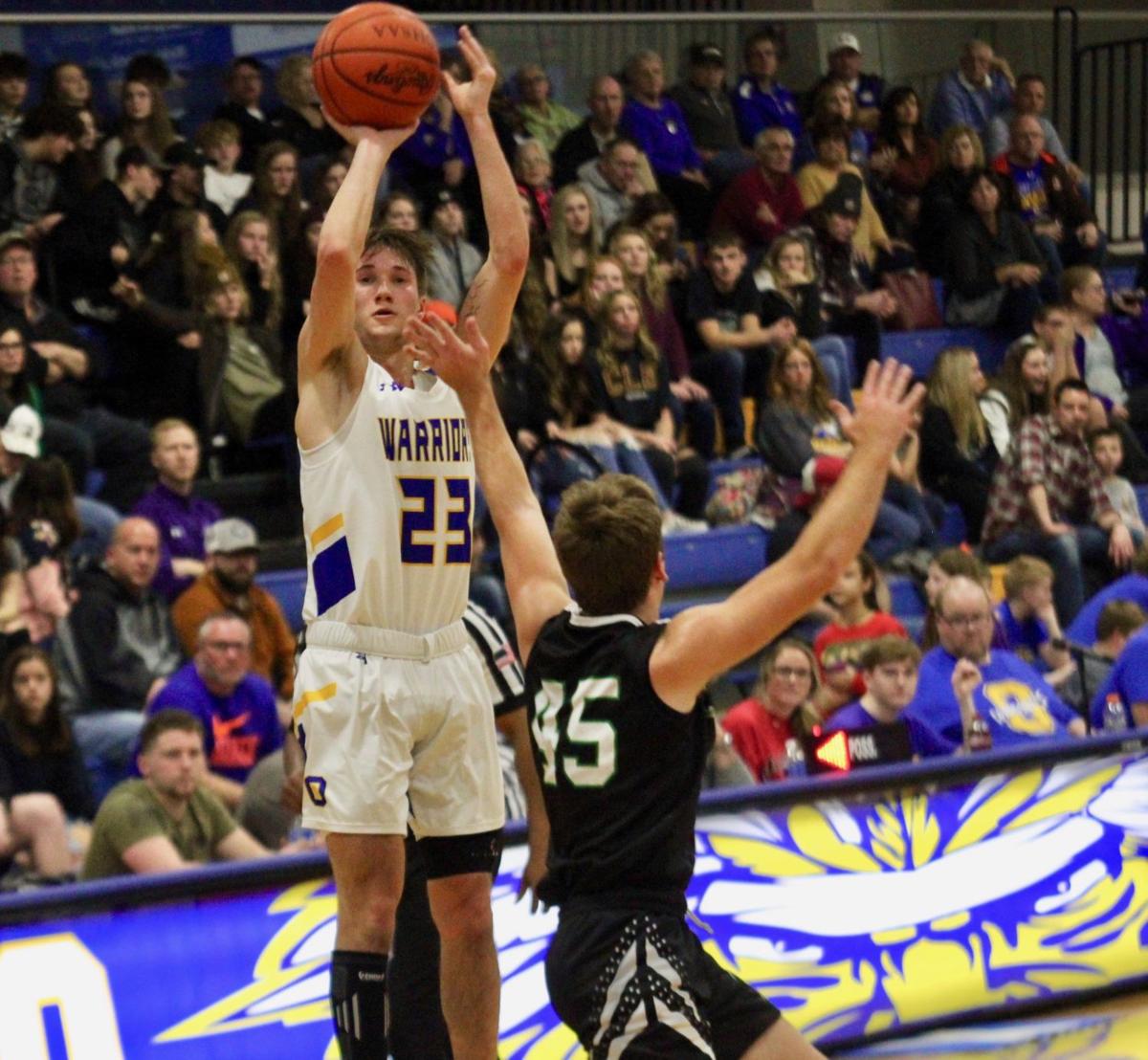 Ontario's Griffin Shaver launches a 3-pointer over Clear Fork's Brady Tedrow to close out the first quarter during a Mid-Ohio Athletic Conference game at the O-Rena. 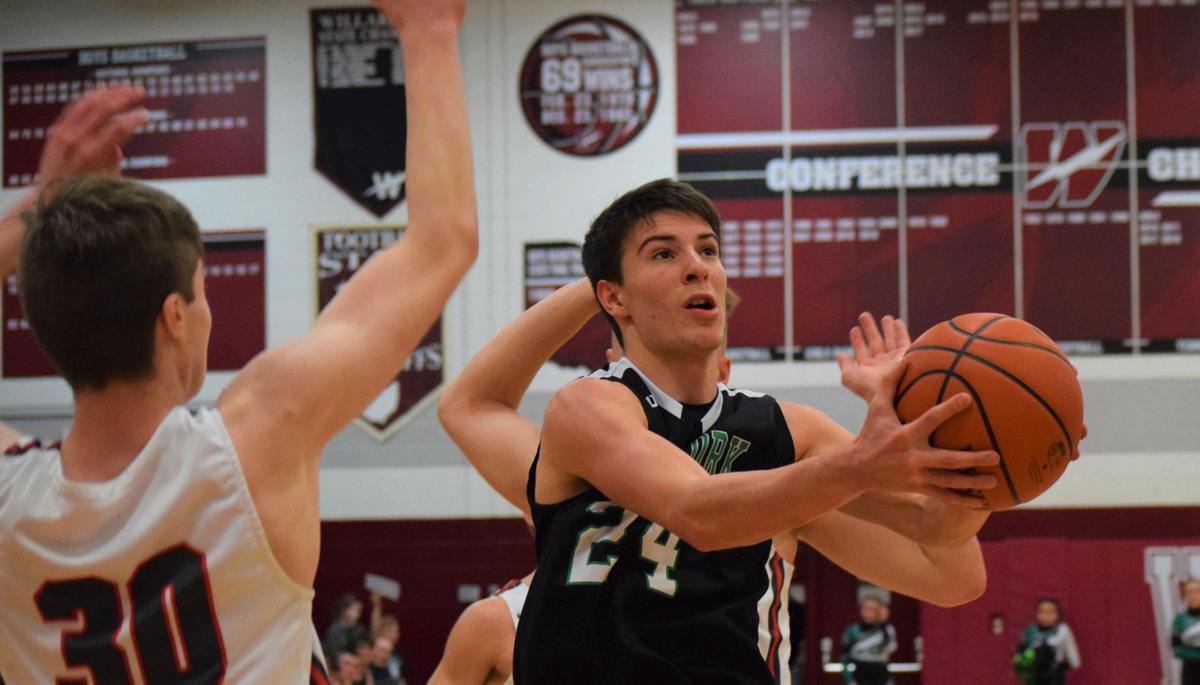 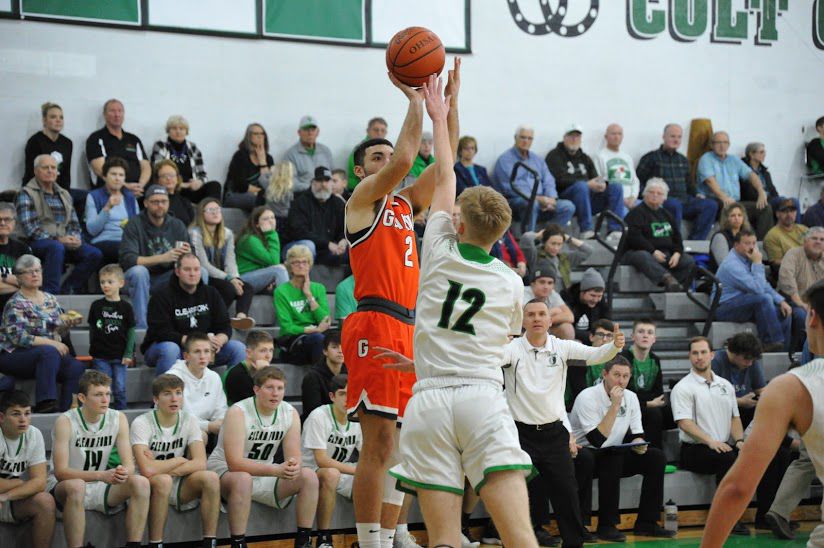 LUCAS — He was an All-Ohio first team pick in both basketball and football and had a fastball that was clocked at 89 mph last June.

It’s safe to say Logan Niswander is one of the greatest all-around athletes ever to come out of Lucas High School.

The newly-crowned Richland Source Boys Basketball Player of the Year, Niswander led the Cubs to unprecedented heights in both football and basketball this year. He quarterbacked the football team to the Division VII state championship game and led the basketball team to a berth in the regional finals before the Ohio High School Athletic Association was forced to indefinitely suspend the tournament because of the coronavirus pandemic.

It’s unclear whether the tournament will be resumed but what is without question is Niswander’s spot among the school’s all-time greats. He passed 2000 grad Elijah Foss to become the career scoring leader in a district semifinal win over Sandusky St. Mary. He averaged 19.7 points a game during the regular season and has 1,335 points after scoring 13 in a regional semifinal victory over McDonald.

“It’s cool, but I’m really not thinking about that,” Niswander said after breaking the record against Sandusky St. Mary. “Right now I’m just trying to play some more basketball and win some more games.”

“He’s one of our best athletes ever,” athletic director and boys basketball coach Taylor Iceman said.

Niswander is joined on the All-Richland Source team by a Lucas teammate and four of the Mid-Ohio Athletic Conference’s top five scorers. All were recognized as All-Ohioans earlier this week.

Riley Gossom, Lucas: A 6-foot-3 shooting guard, Gossom averaged a team-best 21.3 points a game as the Cubs won their second straight Mid-Buckeye Conference crown. He is on pace to pass Niswander as Lucas’ career scoring leader next year. Gossom was an All-Ohio special mention selection in Division IV, helping the Cubs reach the regional final before the season was indefinitely postponed.

T.J. Pugh, Shelby: The 6-foot-6 junior swingman was selected the Mid-Ohio Athletic Conference Player of the Year after leading the Whippets to a perfect 12-0 record in MOAC play. He averaged 20.8 points, 9 rebounds, 2.6 assists and 2 steals a game as Shelby (18-6) won a sectional title. Pugh, who scored his 1,000th career point late in the regular season, was an All-Ohio third team pick.

Griffin Shaver, Ontario: A junior point guard, Shaver is one of the top playmakers and shot-makers in north central Ohio. Shaver averaged 17.2 points, 5 rebounds, 5 assists and 2 steals a game while connecting on a sizzling 43.1 percent of his 3-point field goal attempts (47-109) during the regular season. He was a Mid-Ohio Athletic Conference first team pick and an All-Ohio special mention selection in Division II. Ontario was 17-7 and won a sectional championship.

Brennan South, Clear Fork: A senior and 1,000-point scorer, South averaged 17.1 points, 3 rebounds, 3.6 assists and 2.3 steals a game for the Colts. He finished with 1,198 career points, fourth on Clear Fork’s career scoring list. South was an All-Ohio special mention selection in Division II. He was an All-Ohio first team pick at quarterback during the fall.

Isaiah Alsip, Galion: An athletic senior guard, Alsip will graduate with more than 1,600 career points. He led the Mid-Ohio Athletic Conference in scoring at 22.2 points a game and also ranked among conference leaders at 5.9 rebounds a game. Alsip was one of the MOAC’s best free throw shooters, connecting on 87 of 107 freebies (81.3 percent). He was an All-Ohio special mention selection in Division IV after landing a spot on the All-Ohio second team as a receiver during the football season.