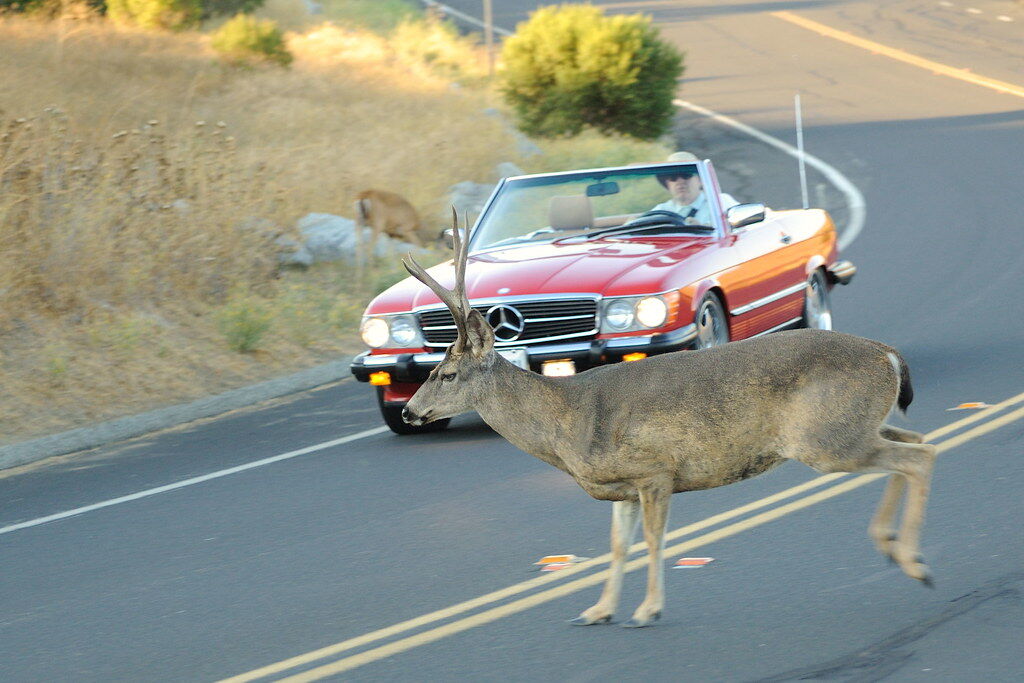 This is the busiest time of year for white-tailed deer in Ohio -- and that can mean trouble between the animals and vehicles. 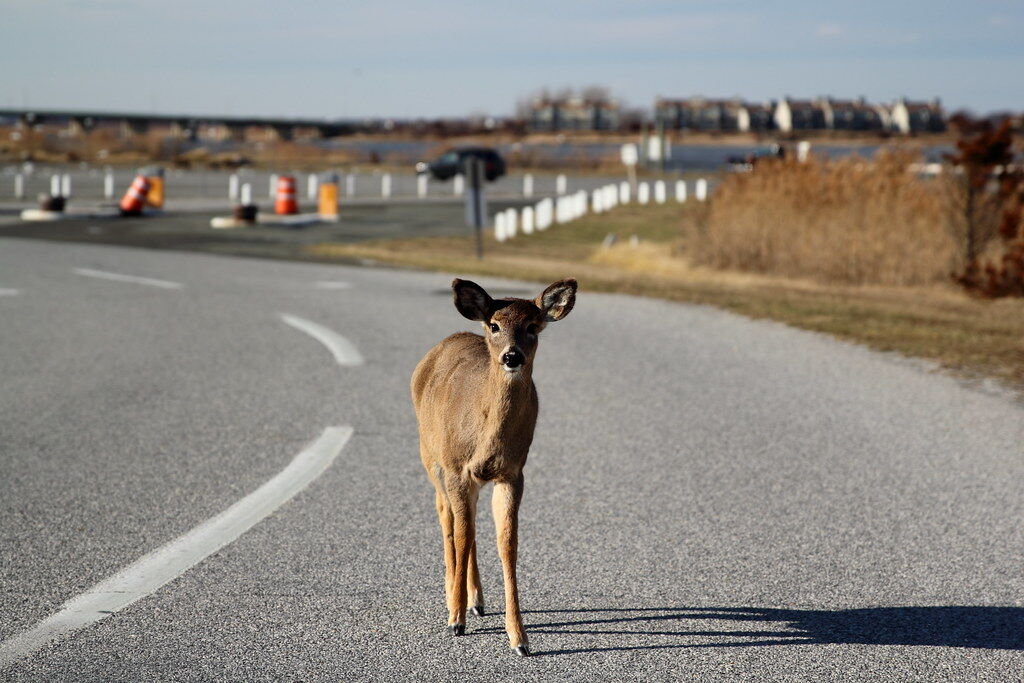 If you want to reduce the chances of a crash, learn something about your four-legged friends. You are on their turf. 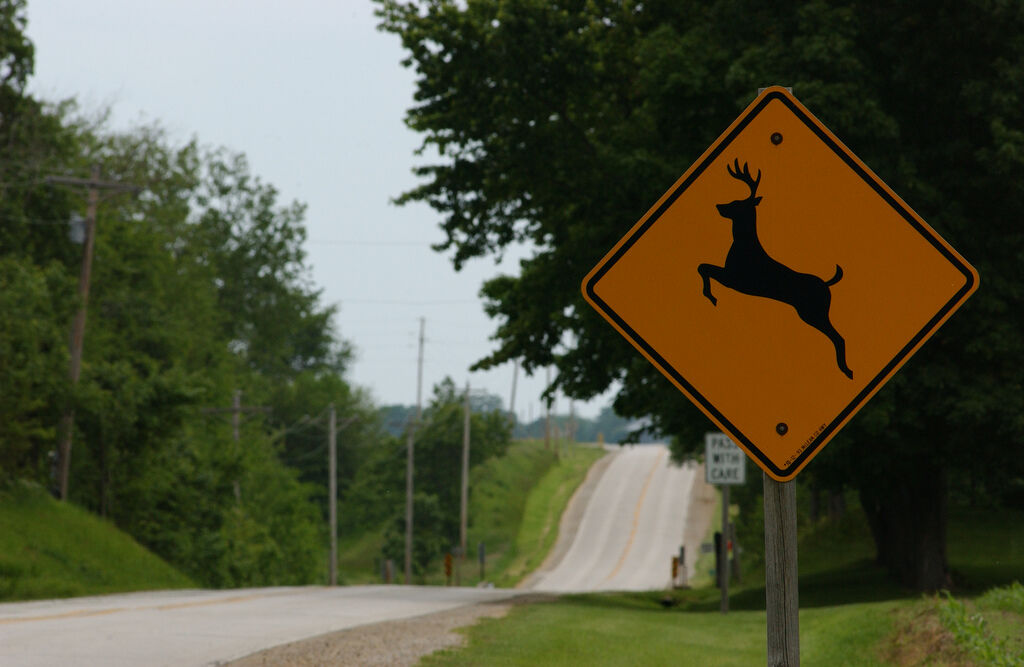 That deer crossing sign is there for a reason. Pay attention to it.

MANSFIELD — This is the busiest time of year for white-tailed deer in Ohio, i.e. the fall breeding season.

You're driving through their living room on a daily basis, trying to get to your destination even as our four-legged friends are focused on amore -- or perhaps avoiding a hunter.

This combination of engine-powered vehicles and love-struck deer is a bad one around the state, in general, and in Richland County in particular.

There were 17,688 deer-vehicle crashes reported in Ohio during 2020, resulting in 857 injuries (55 serious) and three deaths, according to the Ohio State Highway Patrol. Like the OSU football team, the Buckeye state is almost always in the Top 10 nationally for deer-vehicle crashes.

Those are just the crashes reported, so it's likely there were even more fender-fur encounters. Richland County, with highways like I-71 and U.S. 30 cutting through it, was second among Ohio’s 88 counties with 449 of these crashes. Only Stark County (533) was higher.

Nationwide, there are about 1.5 million deer-vehicle crashes annually, killing 175 to 200 people, injuring 10,000 more and causing more than $1 billion in vehicle damage.

So what's the solution? How can you avoid running into Bambi?

Let's start with the best ideas, which are all remarkably low-tech in nature. We will throw in some higher-tech stuff at the end, though some in the expert community still cast shade on some of these ideas.

If you want to reduce the chances of a crash, learn something about your friends. You are on their turf.

Deer are crepuscular and are most active at dawn and dusk. During these times, the deer's wide eyes take in plenty of light to see their paths to their favorite food sources, at a point when most predators are struggling to see clearly.

The hours between 6 and 9 p.m. are prime time for deer to be on the move. That's a key piece of intel to have when you slide behind the wheel.

Deer are social animals and seldom travel alone, traveling instead in small herds. Why is that important to know? Well, odds are if you see one deer on or near a road, there is a very good chance there are more.

When you are cruising down Hanley Road, for example, and a deer flashes across the blacktop, don't relax and think you just narrowly avoided a crash. Slow down and look -- more may be about to join their friend in a mad dash of their own.

Have you heard the expression of being frozen "like a deer in the headlights?" It's rooted in fact and that is our third piece of important intel.

As we said earlier, deer are crepuscular. Their eyes consist of more rods than cones, which is why they are able to see clearly, even at night.

At night, their eyes are likely fully dilated to capture as much light as possible. When your car headlight beams strike those eyes, the deer likely cannot see at all. They will simply freeze until their eyes adjust.

Why is that important? When you see that deer freeze in front of you, don't assume he will flee before your vehicle reaches him. Assume the opposite. Slow down and prepare to stop.

If you see a deer approaching the road, don't anticipate you will be safely past before he crosses or that a nearby fence will stop him. A white-tailed deer can sprint as fast as 35 miles per hour and can clear a 10-foot height when running. He can also cover as much as 30 feet in a single leap.

In other words, if a buck is in a hurry chasing a fleeing doe trying to stave off his attention, both will be moving fast -- and they are not paying a bit of attention to you.

Pay attention to your own driving

Now that we know more about our forest neighbors, let's turn the attention to the person behind the wheel: You.

In addition to the time of day, know where you are when you are operating a motor vehicle. If you are on Middle-Bellville Road approaching Ohio 97, you are more likely to come across a deer than while driving on North Main Street in Mansfield.

Pay attention to deer-crossing signs. They were placed there for a reason, i.e. deer are more likely to be present. If you follow a route on a daily basis, you may see deer consistently grazing in the same field during the day. Make a mental note of when and where you regularly see the animals.

Scan the sides of the road, especially in wooded areas. Watch for shadows that appear to be moving. When possible, turn on your vehicle's high beams and scan ahead, also. In short, pay attention.

If you do see a deer, or any animal, on the side of the road, slow down and prepare to stop.

If you see a deer ahead on the road, brake firmly and slow as quickly and safely as possible, but do not swerve. Deer are easily confused and if you swerve, he just may run into the vehicle rather than away from it. Swerving could mean driving into another vehicle or off the road into poles or fences.

There are some high-tech devices out there you can purchase for your car or truck that supposedly scare off deer before a collision.

Often called "deer whistles," they are made by a variety of manufacturers and can be purchased cheaply online or a retail store. Once attached to your front bumper, they're supposed to emit a sound that alerts deer and scares them off.

However, scientific tests of these aftermarket purchases have not been overwhelming in approval. Researchers have tested various whistle sounds and found deer hear some of them, but it's likely too late at that point to avoid a collision.

In other words, buyer beware. And if you have a deer whistle, don't assume it protects you. The deer standing in front of you may not hear your particular whistle. He may not have the ability to quickly process the alarm information. He may not even recognize the sound as a threat.

Other ideas to stop deer-vehicle crashes in the future are still in the testing state, but bear watching.

According to a story published in 2020, researchers with the U.S. Dept. of Agriculture's Wildlife Services had invented a lighting system for cars that could eliminate the "deer in a headlights" factor in crashes.

"Through a series of experiments with free-roaming white-tailed deer, researchers found that by using a rear-facing light-emitting diode light bar which illuminates a larger portion of the vehicle’s front surface than standard headlights alone, resulted in fewer dangerous deer-vehicle collisions," the story said.

The likelihood of dangerous interactions with deer decreased from 35% to only 10% when using the rear-facing light bar plus headlights versus just headlights alone, the story said.

Another 2020 story reported two German universities and tech partners are designing a system of sensors along roads paired with machine learning to spot deer and other wildlife to then warn drivers.

The so-called SALUS system is envisioned to be spread across Germany. It will rely on radar, optical cameras and infrared sensors to spot animal movement that are installed in posts 40 kilometers apart. That data will then be automatically interpreted to predict the behavior of wild animals and separate them from cars and motorcycles, according to the story.

In a story published in 2018, when conservation scientists in Wyoming discovered wildlife reflectors weren't working, they found out white bags might do the trick to keeping deer off the roads.

Others have suggested that increasing the cougar and wolf populations could reduce deer-vehicle crashes by allowing these predators to do what they do best -- eat large mammals like deer. Both those solutions, however, come with increased worries about livestock and pets.

Despite all of the low- and high-tech solutions, it's inevitable deer-vehicle crashes are going to occur, even when we take all the preventative steps possible.

We are assuming you're wearing a safety belt at the time of the crash. If you aren't even doing that, hitting a deer may be the least of your worries.

If you hit a deer, move your car safely off the road, turn on your hazard lights and call the police, sheriff's department or state patrol. If you must leave your vehicle, stay off the road and out of the way of any oncoming vehicles.

Don’t attempt to touch or move an injured animal, even if it appears dead. A stunned, frightened, injured deer is still a powerful animal with sharp hooves that can injure you in its attempt to escape.

Don't assume your vehicle is safe to drive. Double check it before resuming your trip. Look for leaking fluid, loose parts, tire damage, broken lights, a broken hatch and other safety hazards.

People like you power our reporting about solutions to problems facing our region. Keep funding the whole story of our region by becoming a member today.