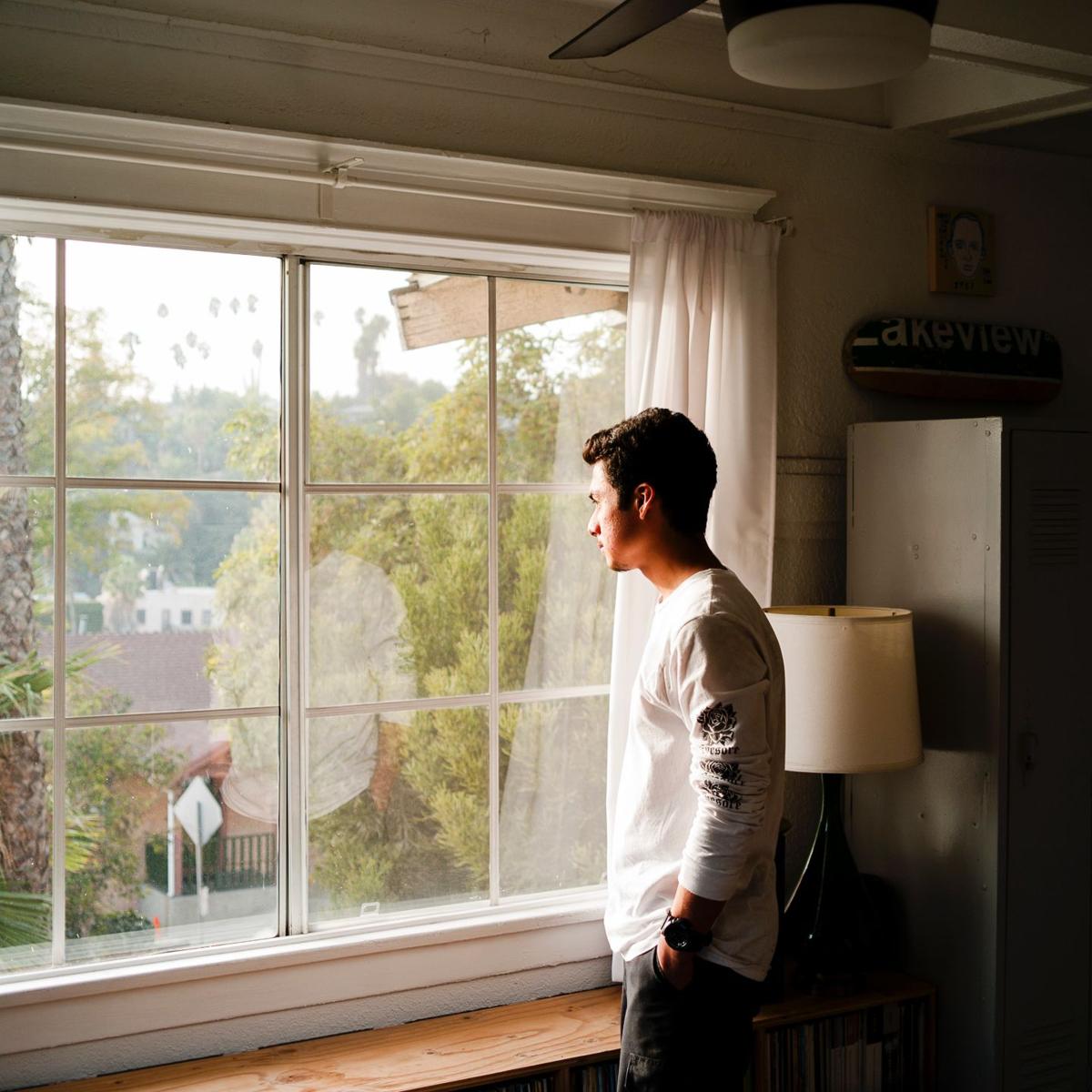 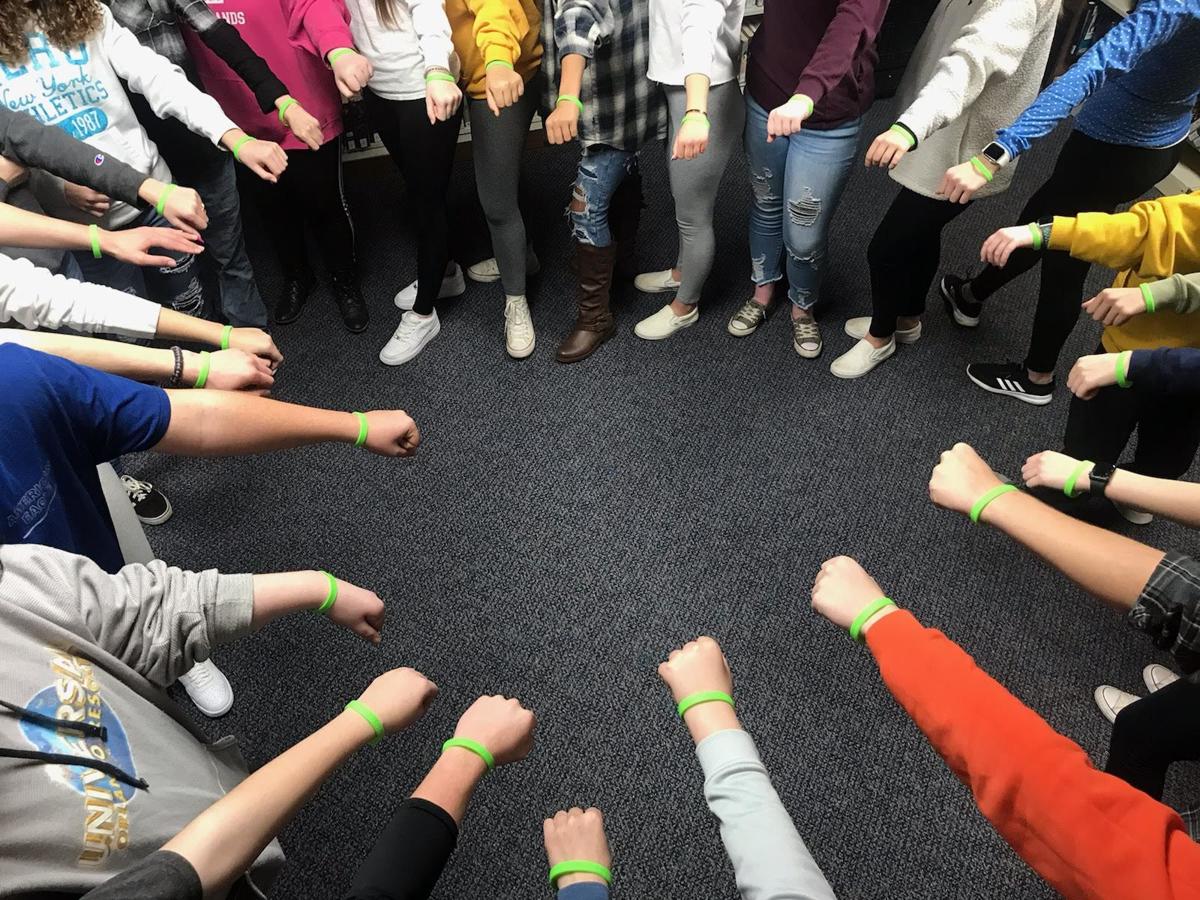 Freshman at Ontario High School present their wristbands with the crisis hotline phone number etched on them.

"Many of our kids are still wearing them long after the presentation.  It is a great reminder for our students," said Kurtz-Nagel.

Editor's Note: This story was written in response to a suggestion by Cathy Hancock though Open Source. She asked: "How about a story on NAMI Richland County, they have a great suicide prevention program that they take into the schools, the family-to-family education program and educating and advocating for family and friends with mental illness is very noteworthy."

MANSFIELD — The state of Ohio is in the midst of a mental health-crisis, but Richland County has several organizations working to combat it.

The suicide rate - the number of deaths of suicide per 100,000 populations - has increase by 56 percent among Ohioans aged 10 through 24 over the course of the decade.

"I'm a nurse and a family member and a professional that's worked in helping families with mental health issues for over 20 years," said Mary Kay Pierce, executive director at the National Alliance on Mental Illness (NAMI) in Mansfield. "I don't know all the reasons why (suicides happen), but I do know it's happening, and we have to address it."

She added that while the bulk of young males are showing up more frequently in suicide rates, mental health issues can appear in any age group, male or female. 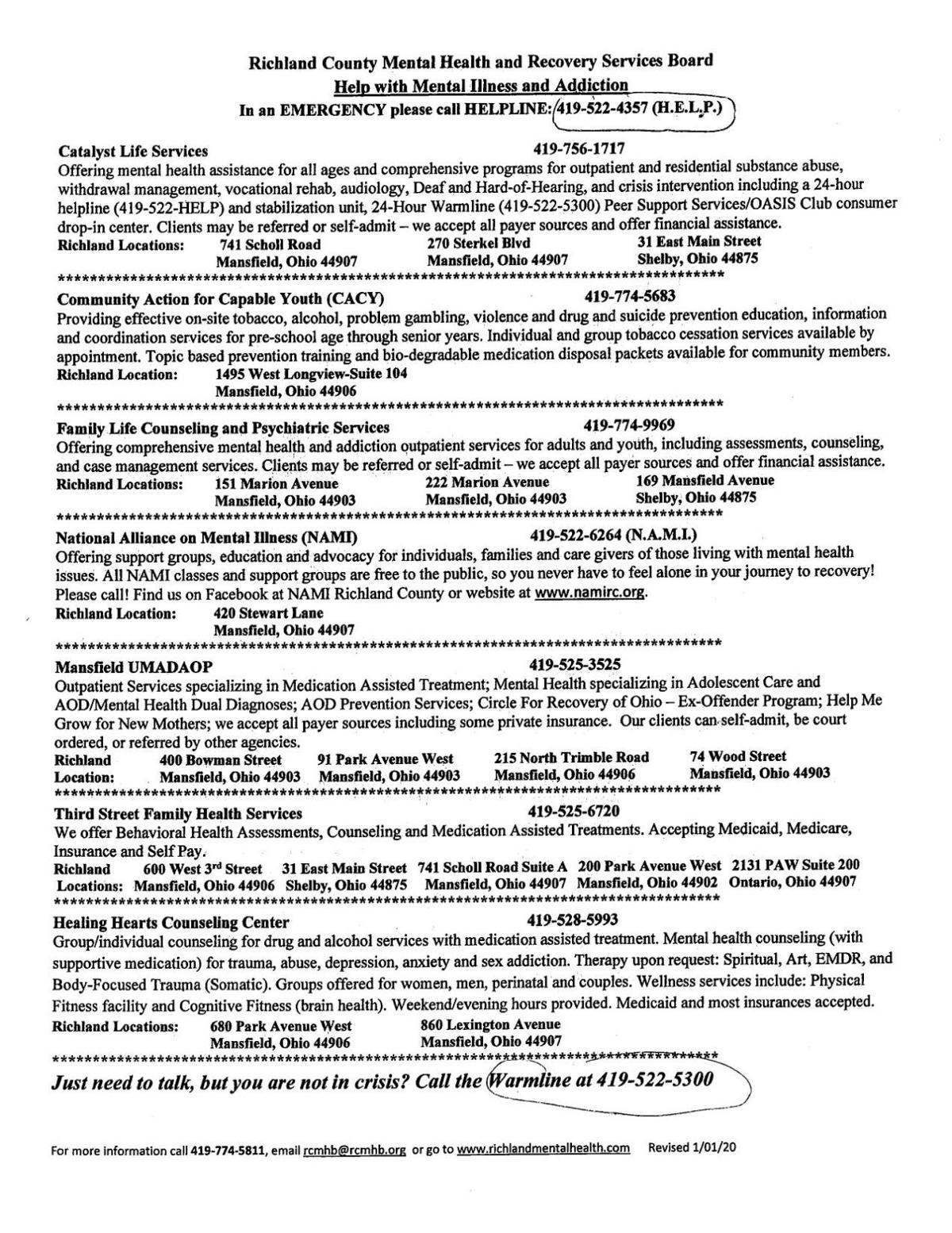 NAMI, as well as several area agencies have programs in place to reach out to individuals.

"We just want people to know that they're not alone," said Pierce. "If you call this number (419-522-4357 or text "4Hope" to 741741), we share these resources with you. We have a wealth of agencies that help. We just want to make sure the community knows they're not alone and we'll do our best to get them the help they need."

NAMI concentrates on prevention, education and support groups, coming alongside families who have loved ones with depression, bipolar disorder, schizophrenia - focused mainly on adolescence, but they can focus on all the above.

Crisis intervention team officers in Richland County are trained to help in a mental health crisis, too. Those in need can always call 9-1-1 and ask for a CIT officer, Pierce said.

The newest program NAMI has started is the Ending the Silence campaign.

With this program, a NAMI mental health expert and a young adult who has or had mental health issues in the past come to school districts and present for 50 minutes to 20 to 30 students in a classroom.

Education is the best way to end the stigma about mental illness, said Pierce.

"I really liked it," said Amy Kurtz-Nagel, a school social worker at the Ontario School District. "It was well planned. It is super important and the young adult was super relatable."

The Ending the Silence campaign started six months ago nationally. Pierce said the Mansfield NAMI began reaching out to schools in November of 2019.

"(Students) respond better to people they relate to," Kurz-Nagel said of the Ontario presentation, which happens each semester in the freshman health class. "You could see them really connect when the young adult shares their story."

After the most recent presentation, students were asked to take an exit survey.

Below are some of the comments from the survey. Names are not included with the quotes:

"I liked how they talked about still being able to achieve.  I think this is motivational for people that have a mental illness"
"Learning the warning signs of mental health issues and that it's okay to go ask an adult for help"
"I liked that the presentation showed that having a mental illness is more common than you think and it's ok to talk about it"
"I liked how it taught you what to do if you're in a situation that you can't handle on your own"
"I liked that everyone was part of the conversation and was welcome to share their thoughts"

Students also were given rubber bracelets with the mental health crisis hotline phone number on etched on them. Kurtz-Nagel said many students still wear them.

"It really has been a great program for them," Kurtz-Nagel said. "We have many students who struggle with trauma and anxiety. For them to be able to see someone who has had those issues and talk about overcoming them and being told of hotlines they can text is very helpful."

This document was used prominently for data throughout this article.

Patricia Newton, MD, a psychiatrist with OhioHealth Mansfield Hospital’s behavioral health department identified the following warning signs that can alert families that their teenagers may need some help negotiating this vulnerable period:

Signs of depression: Lack of enthusiasm, withdrawal from friends and family, loss of interest in things that were once a source of pleasure, low energy, sleep and appetite changes.

A drop in school performance: Lower grades than usual.

Unusual irritability: This could include getting into trouble at home and at school, associating with peers who seem troubled.

Need help? It's okay to ask for help.

NAMI Richland County is changing the stigma around mental health

NAMI Richland County is helping to change and improve the lives of individuals with mental illnesses and their families every day.