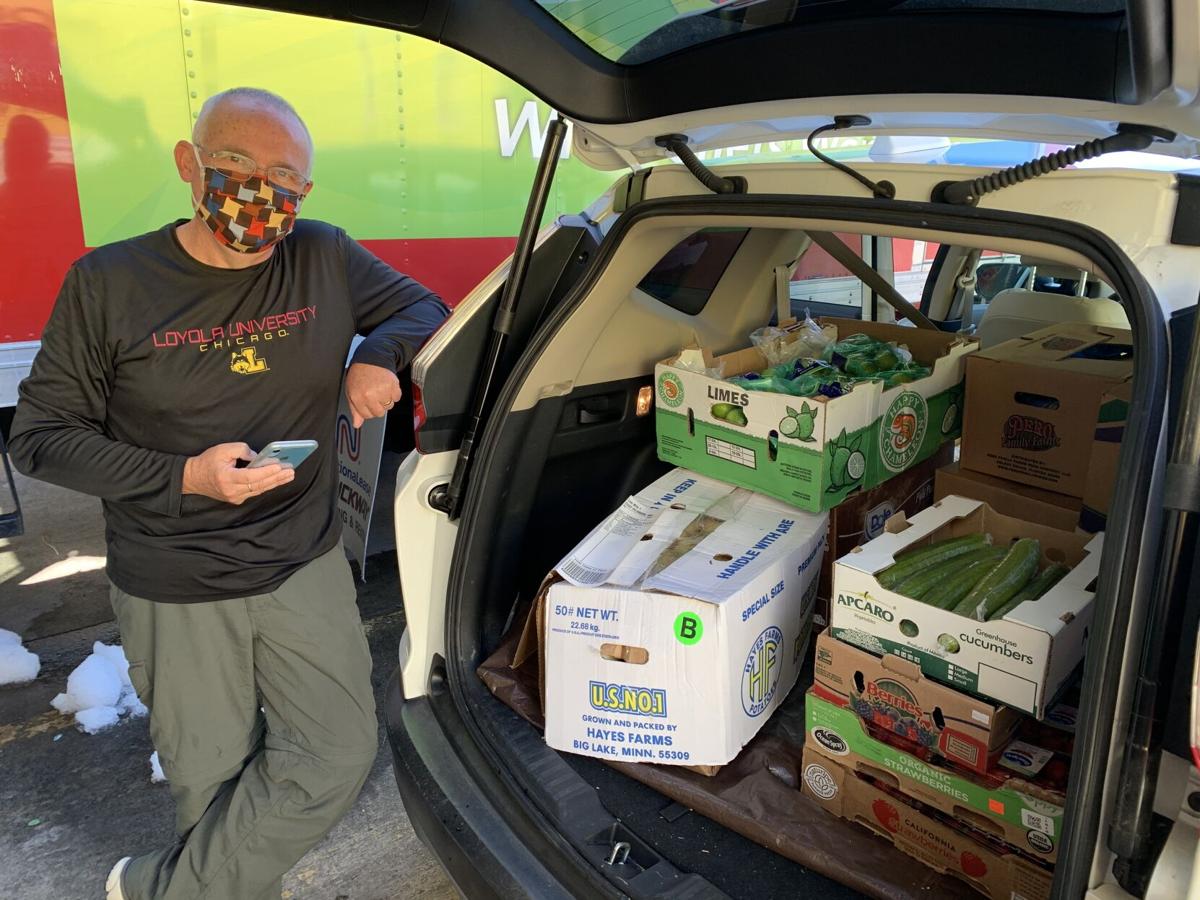 Dennis Cerullo, a volunteer with Last Mile Food Rescue, loads up his vehicle with donated groceries. Volunteers use their personal vehicles to pick up small scale donations and take them to food pantries, soup kitchens, shelters and other non-profits across Cincinnati. 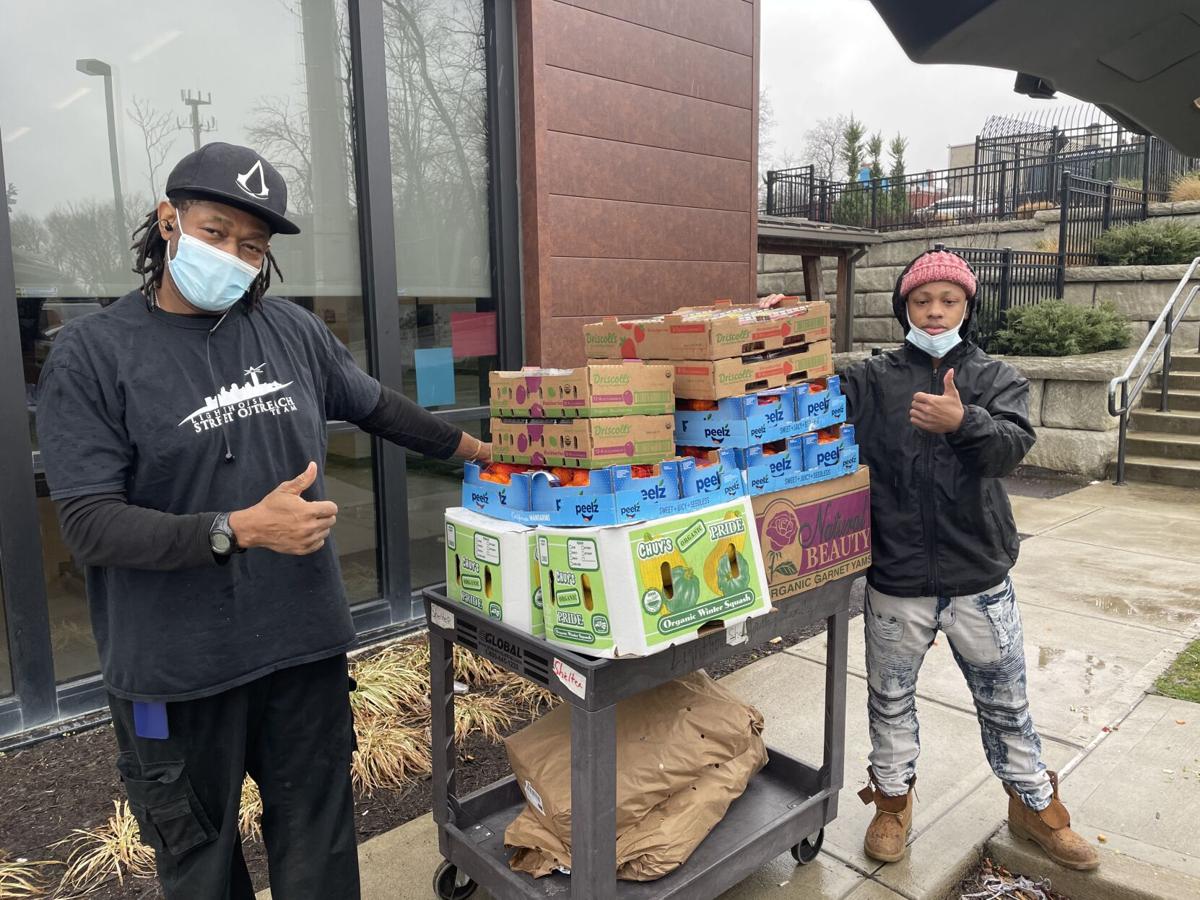 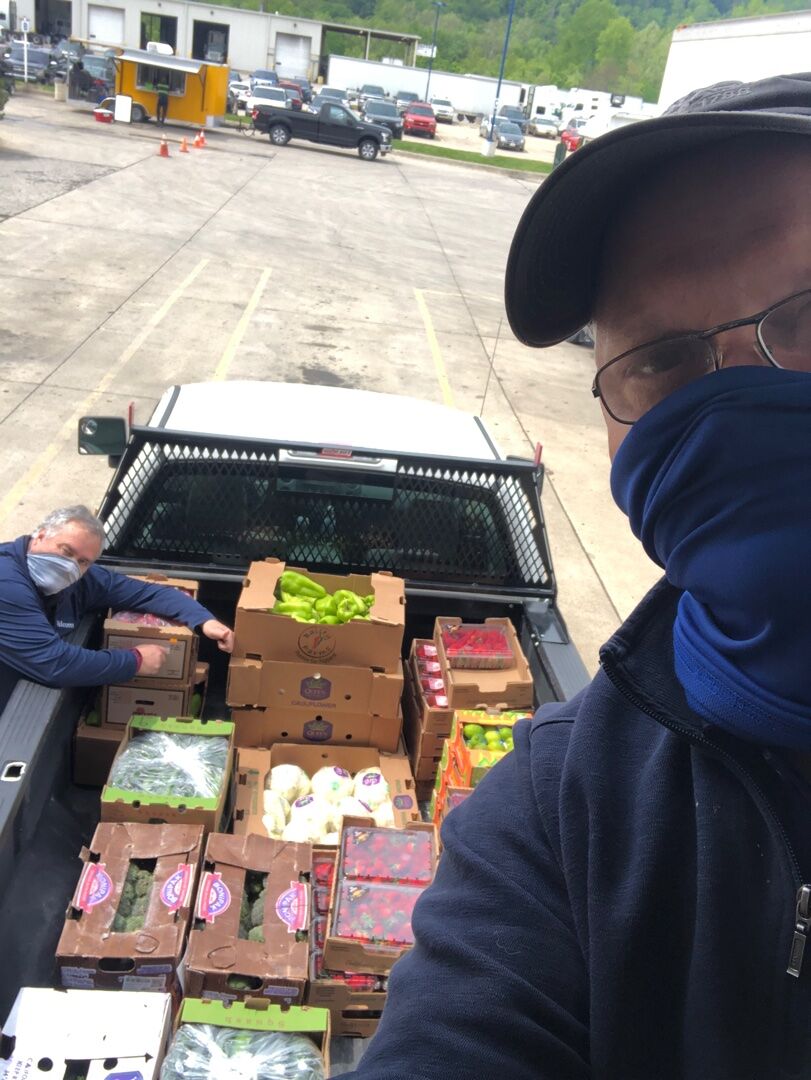 Volunteers take a selfie break during a food rescue operation in Cincinnati. 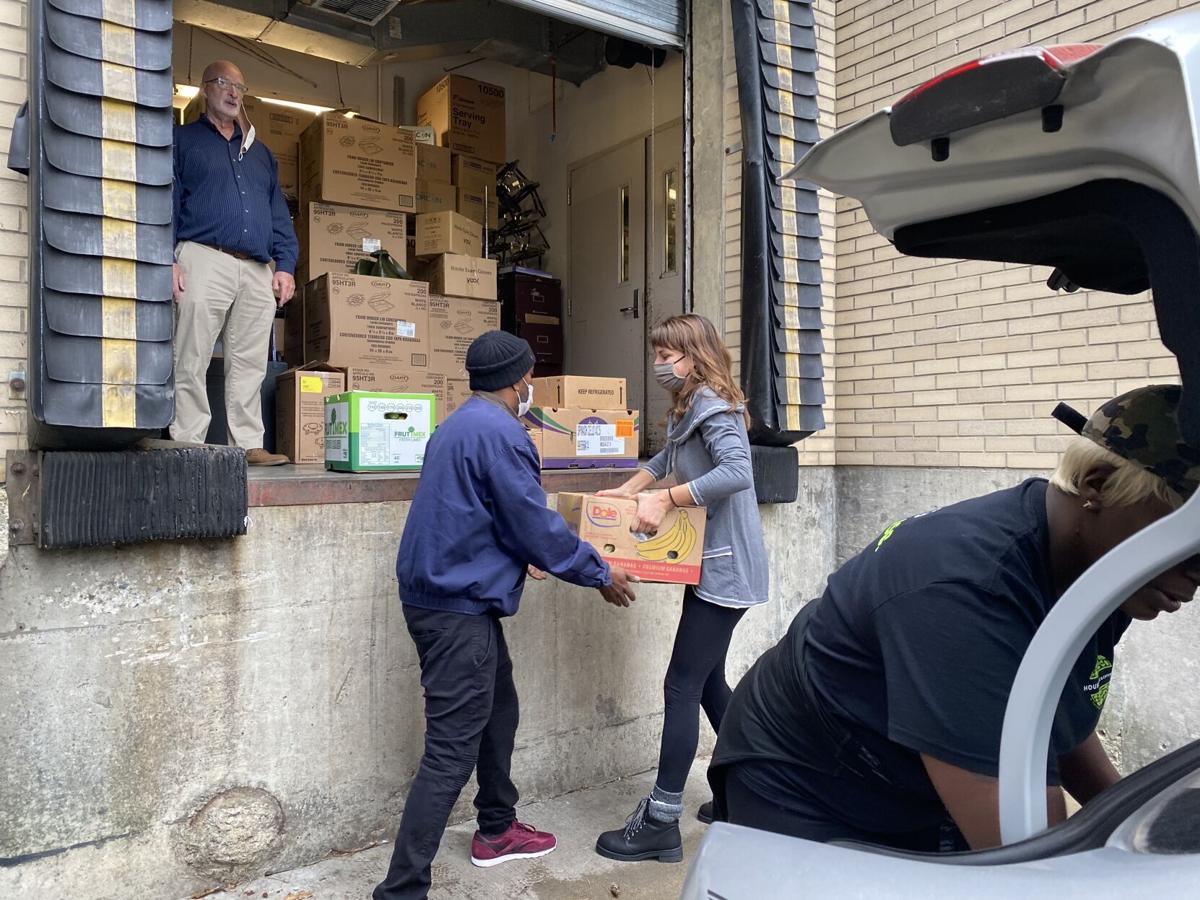 Volunteers from Last Mile Food Rescue drop off boxes of food at a community services center in Cincinnati.

CINCINNATI -- All that Dennis Cerullo needs to fight hunger is his car keys, a smartphone and a little bit of time.

The work was rewarding, but when the COVID-19 pandemic hit, the pantry halted its volunteer efforts. So, Cerullo turned to a new kind of volunteer effort that was COVID-safe and still going strong. Nine months later, he is donating his time to Last Mile Food Rescue, a Cincinnati non-profit that transports excess food from retailers and restaurants to other non-profits across the city.

Non-profits like Last Mile and Cleveland's Hunger Network use the app Food Rescue Hero to coordinate donations and deliveries. Volunteers can download the app for free and register to receive notifications when there is a donation available nearby.

If a volunteer has time to pick up the food, they use the app to “claim” the delivery, much like a driver would for DoorDash or Uber. Food Rescue Hero automatically creates a route from the donor to a pre-approved recipient nearby.

Cerullo and other “food rescue heroes” pick up and deliver the food in their own personal vehicles. This provides greater flexibility for donations, but it also allowed volunteers to continue in spite of health and safety restrictions.

“I think what's really appealing is using this technology. It's pretty easy,” said Stacy Soulimiotis with Hunger Network. “You can do something meaningful in an hour.

“During the pandemic, I really didn't think that we could continue operations, but man did people pull through. Volunteers were popping out like crazy and donors were like, 'Hey, we see there's a huge need, what can we do?' It's been truly amazing.”

Donated food can come from nearly any place that follows food safety laws — grocery stores, restaurants, bakeries and even sports stadiums. Donors typically give about 12 hours' notice when posting a food rescue opportunity, although sometimes the time frame is shorter. Some volunteers can even sign up for weekly pick-ups at the same time and location.

Volunteers can help out as often as they want -- whether it’s once in a while or multiple times a week.

Cerullo has made food rescue a regular part of his routine.

“It’s an easy way for me to feel like I’m directly contributing back to the community in a meaningful way,” he said. “That’s really what keeps me coming back.”

Last Mile founders Tom Fernandez and Julie Shifman spent months researching food rescue efforts across the country before purchasing the rights to the Food Rescue Hero app. They ultimately chose the app because it was user-friendly and found a way to make food rescue safe while allowing for the use of personal vehicles.

Volunteers with Last Mile and Hunger Network receive a brief training on how to transport food in a way that is safe and sanitary. They also learn how to inspect donated food in order to reject unsafe donations.

A large part of donor and recipient buy-in comes from the Bill Emerson Good Samaritan Act of 1996. Both donors and recipients are protected under the act, which provides liability protection for people (or businesses) who make good faith donations of food and grocery products to nonprofits that feed the hungry, according to the USDA.

“A lot of organizations get stuck on the liability issues or food safety issues of using personal vehicles,” said Olivia Cook, volunteer and marketing manager at Last Mile. “That really solved those two seemingly large problems.”

Focusing on fresh foods helps these organizations avoid overlapping with larger food rescue operations centered on shelf-stable items. With a network of volunteers throughout the city, Last Mile and Hunger Network can target smaller donations that food banks wouldn’t typically pick up.

Soulimiotis estimated that between 80 and 90 percent of the food rescued by Hunger Network is fresh baked goods and produce — foods that aren’t always readily available to pantries.

Food rescuers also pick up meal kits and prepared food from restaurant, which typically go to shelters or transitional housing.

“We can go into a United Dairy Farmers store, rescue maybe one crate of milk, a couple cartons of eggs and some leftover donuts and take it to a food pantry that’s ten minutes from the store,” Cerullo said. “The bigger food distribution organizations, it’s not efficient for them to send out trucks and drivers to pick up that small of a donation.”

While donations picked up in personal vehicles may seem small, the food adds up quickly.

Hunger Network has rescued 2.4 million pounds of food since it was founded two and a half years ago.

While increasing access to healthy food is one benefit of food rescue, it’s not the only one. Reducing food waste can also have a profound impact on the environment.

“Every person throws away about three and a half pounds of food per week that is perfectly viable food,” Soulimiotis said. “Forty percent of our food goes right into the trash.”

Stacy cited further statistics from the USDA, which estimates that Americans waste between 30 and 40 percent of the country’s food supply.

According the U.S Environmental Protection Agency, in the United States, food is the single largest category of material placed in municipal landfills, where it emits methane, a powerful greenhouse gas. Municipal solid waste landfills are the third-largest source of human-related methane emissions in the United States, accounting for approximately 15.1 percent of these emissions in 2019.

Much of that food is thrown away while its still perfectly good to eat.

“If you think about the way our food system works, if you're going to the grocery store and buying food you want at least a week left to use it,” Cook said. “And so a lot of the food that we're getting from grocery stores and distributors has five to 10 days left of shelf life, and it's just not long enough for it to be sold.”

While the Food Rescue App has facilitated much of the rescue process, there are still challenges. Maintaining the “three legged stool” of donors, recipients and volunteers takes time and commitment.

“As we onboard more donors, we need to find nonprofits that can use that type of food,” Cook said. “Some nonprofits we work with love getting truckloads of milk, but others don't have enough refrigeration space or they're doing a more soup kitchen style and people don't really drink milk at their place and so they don't need that donation. So we very much are customizing, making sure that the right food is going to the right place so that it's used.”

Soulimiotis said it takes persistence to get donors on board in the beginning. Knowing what motivates a particular business helps — some will welcome the chance to help their community, others may get on board for the cost-saving benefits or tax breaks.

“There's always an opportunity to do food recovery, no matter the size, and how rural a place is," Soulimiotis said. “Everybody has to tailor the program to what’s suitable for their community. Always do your research and ask questions.”

NEXT IN THIS SERIES: The fourth and final article in this series will address how Richland County residents can reduce food waste in their own homes.

From excess to opportunity: How a rural non-profit fights hunger and food waste

EDITOR'S NOTE: This is the second of a series of solutions stories addressing food waste and food rescuers in Richland County and beyond. Clic…