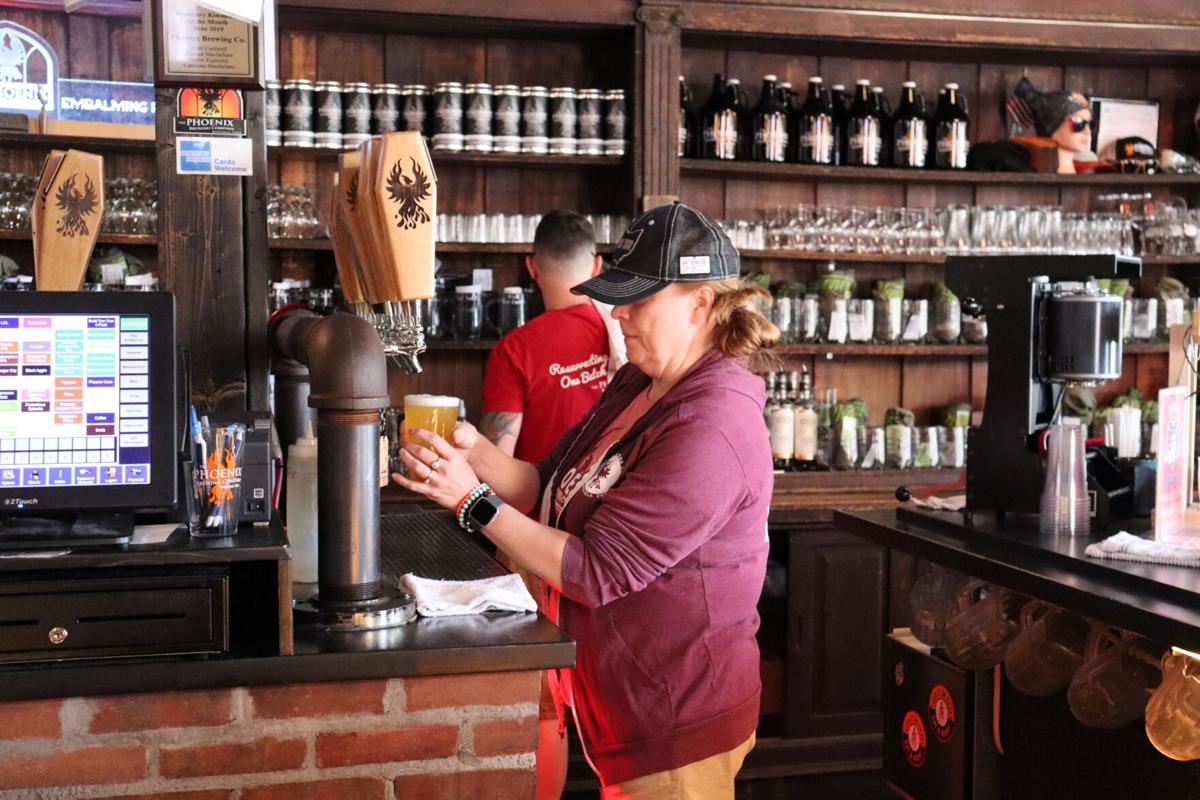 Employees at The Phoenix Brewing Company are paid at a flat hourly wage so that the business has stopped accepting tips. 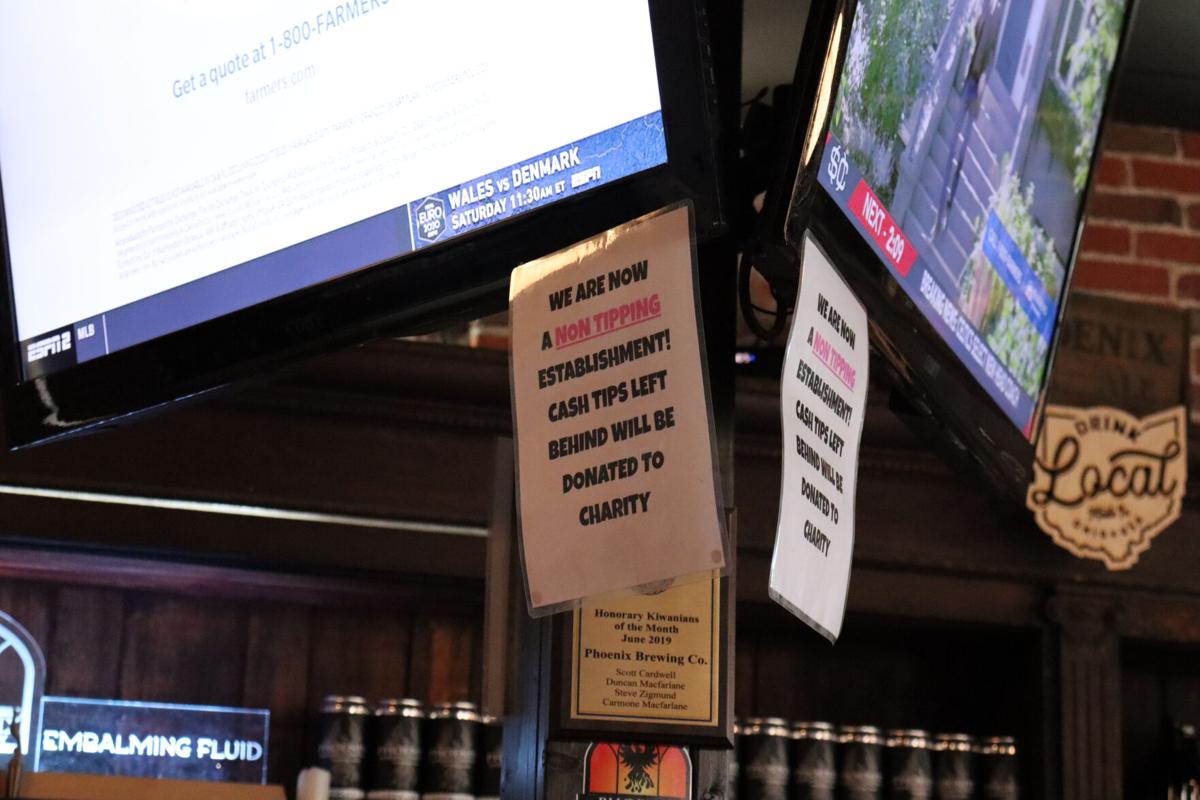 Announcements at The Phoenix Brewing Company notify customers that it no longer accepts tips. 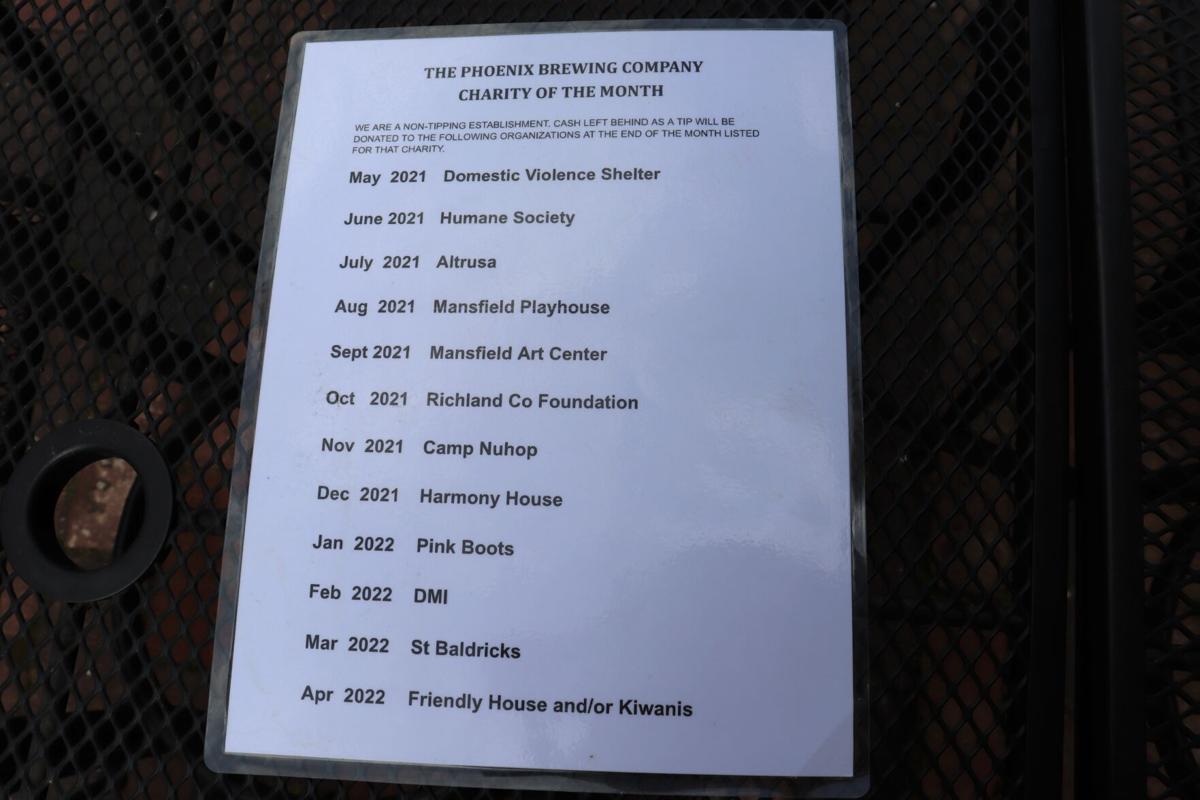 The Phoenix has listed 12 organizations that will accept the cash tips.

MANSFIELD ─ Starting in May, things are slightly different at The Phoenix Brewing Company, which does not accept tips anymore.

“There's no place on a credit card receipt to add a tip like a normal (receipt),” co-founder Scott Cardwell said. “When folks ask that question, we just say we're no longer a tipping establishment. So, there's no need to leave a tip.”

All 14 employees, the majority of them work part-time, now are paid at a flat hourly wage based on the time they have been with the brewery, Cardwell said. It is a policy that better reflects all other tasks the staff has taken on besides working behind the bar, the co-owner added.

The owners understand some customers might need time to get comfortable with the new practice and still want to leave cash tips. It is appreciated, Cardwell said, but the money will be donated to a different organization each month.

The Phoenix has listed 12 establishments that will accept the cash tips, including the Domestic Violence Shelter, Mansfield Playhouse and Downtown Mansfield, Inc. Cardwell said the business has supported those organizations in the past.

It donated over $1,300 of tips to the Domestic Violence Shelter in May and has received a similar number of gratuities in June. The money will go to the Humane Society of Richland County this month.

As the owners predicted, some patrons are still trying to get used to the new policy.

“My reaction was I hope the employees are getting what they deserve,” Chad Eicher told Richland Source recently.

Eicher said he has gone to the Phoenix since it opened in 2014. While it has been almost two months, he still feels weird not leaving a tip.

Kristy Middleton, who said she is a generous tipper, can relate to that. However, she said she is OK with the practice now by understanding how much the bartenders earn would fluctuate on busy and slow days.

Ryan Nichols, one of the brewery’s staff members, said the no-tipping policy seems appropriate and brings him a better wage when he brews the beer or shops supplies for the business besides bartending. He has worked at the Phoenix for five years.

“I make a very fair wage all around hourly,” Nichols said.

What he said was exactly why the Phoenix became a no-tipping establishment.

Cardwell said some employees have undertaken different works such as brewing the beer or making deliveries besides working behind the bar before the COVID-19 pandemic arrived last year.

When the pandemic forced the taproom to close, the owners started cross-training everyone to do many different things, including canning the beer and merchandising.

“Because everybody is doing so many different jobs, it just makes sense that this was the right time to make the switch to non-tipped wage no matter where they work,” Cardwell said.

“No matter what job they (the staff) are doing, they're getting much, much higher than minimum wage."

Cardwell said a one-dollar-price-raise has applied to all beverage items and a few cents to slices of pizza to implement the new wage structure. Many of the beer prices stayed the same since the business’ opening.

The adjustment was to compensate for the loss from tips so the company can keep paying the employees what they earned before, he said. Customers do not pay more now because the tips have been eliminated.

The non-tipping policy has worked so well that all current employees can receive a raise starting this week, according to Cardwell.

Refocused on beer distribution amid the pandemic

The taproom did not generate much revenue for the Phoenix last year due to COVID-19, Cardwell said.

“What we did was refocus on distributing, getting beer out places. Canning a lot more beer than we ever did before,” he said.

While the Phoenix has provided kegs of beer for bars and restaurants, Cardwell said it distributed canned beer on a limited basis and only to Richland County, Mount Vernon and Ashland.

The pandemic pushed the brewery to can and distribute more beer to make up for the loss from the taproom, Cardwell said. It got to a point where the owners decided to install the first canning line in-house instead of using another company’s service.

The Phoenix also brought in an employee to take charge of sales full time, Cardwell said. It now distributes the beer to the area enclosed by Cleveland, Akron, Lancaster and Sandusky.

Both kegged and canned beer distribution has increased since last year, the co-owner said, and has generated at least 30 percent of the revenue. Before the pandemic, that number was about 10 percent.

Cardwell said he is excited about the future.

“We're hoping to continue down this path and not look backwards and get to a point where maybe we can add a couple more full-time staff,” he said.