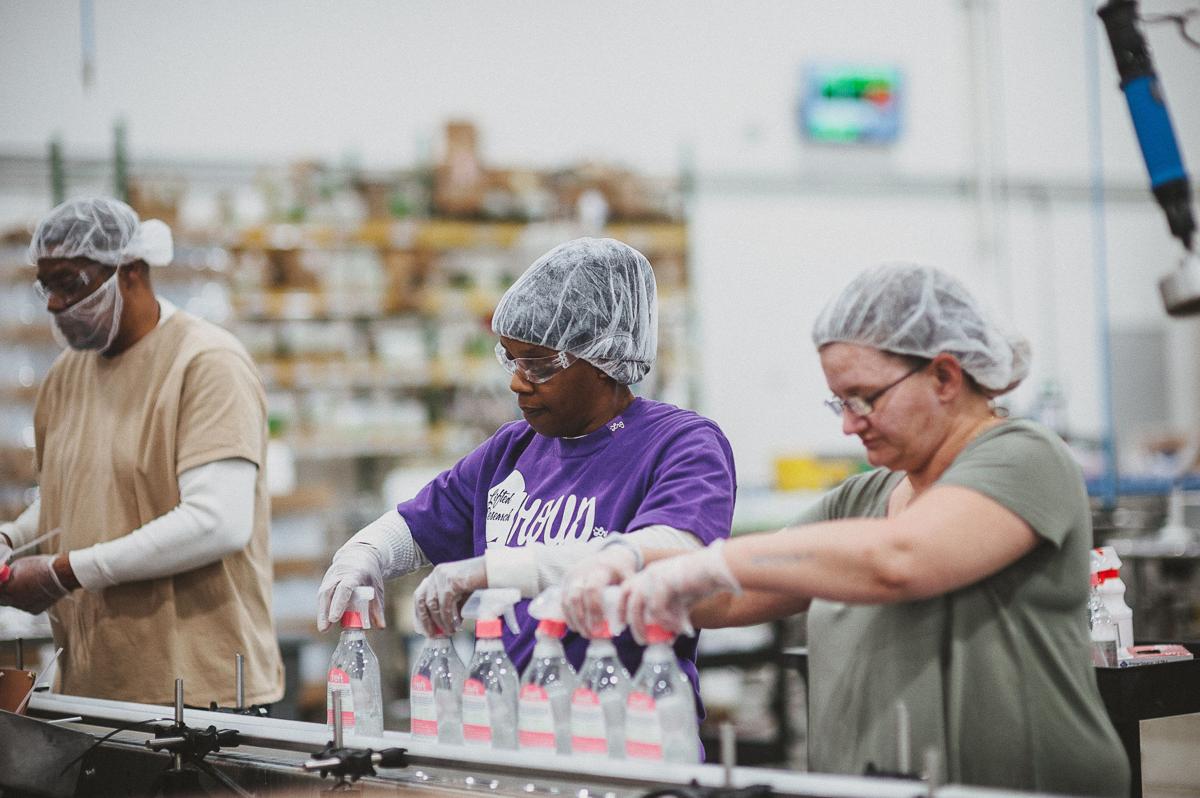 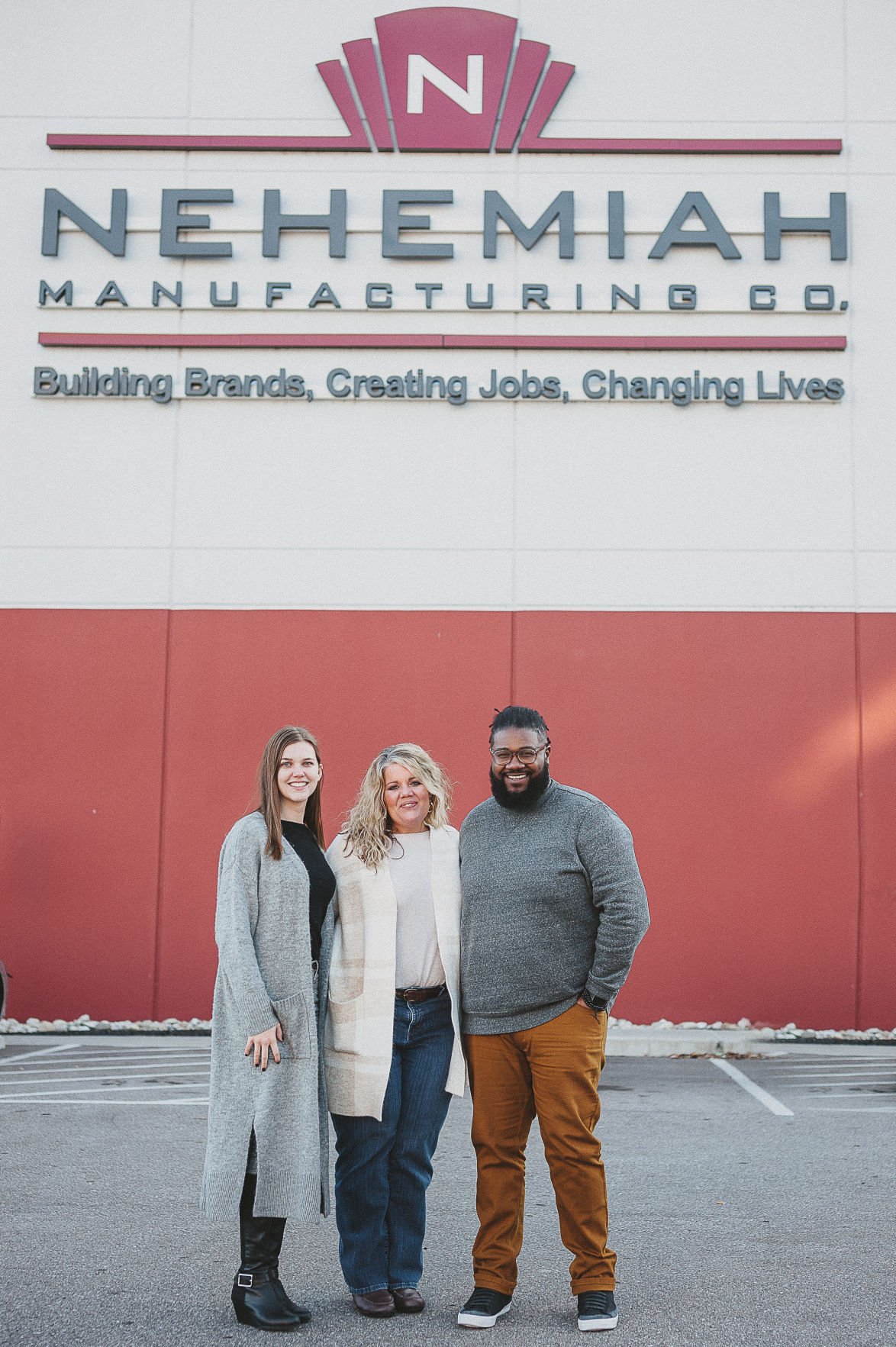 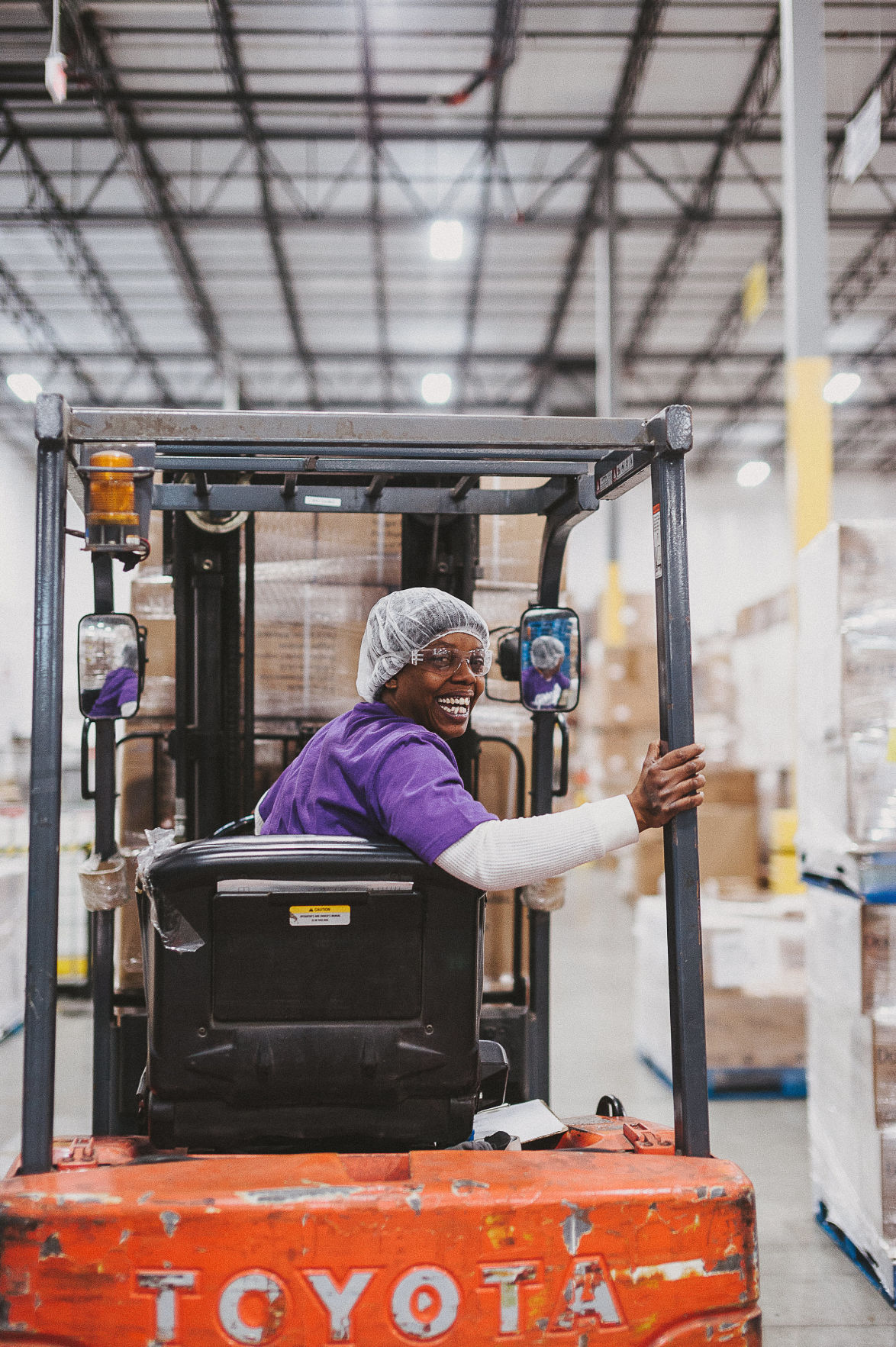 "Her smile infectious," one co-worker said of Tameka Miller, a forklift driver at Nehemiah Manufacturing. 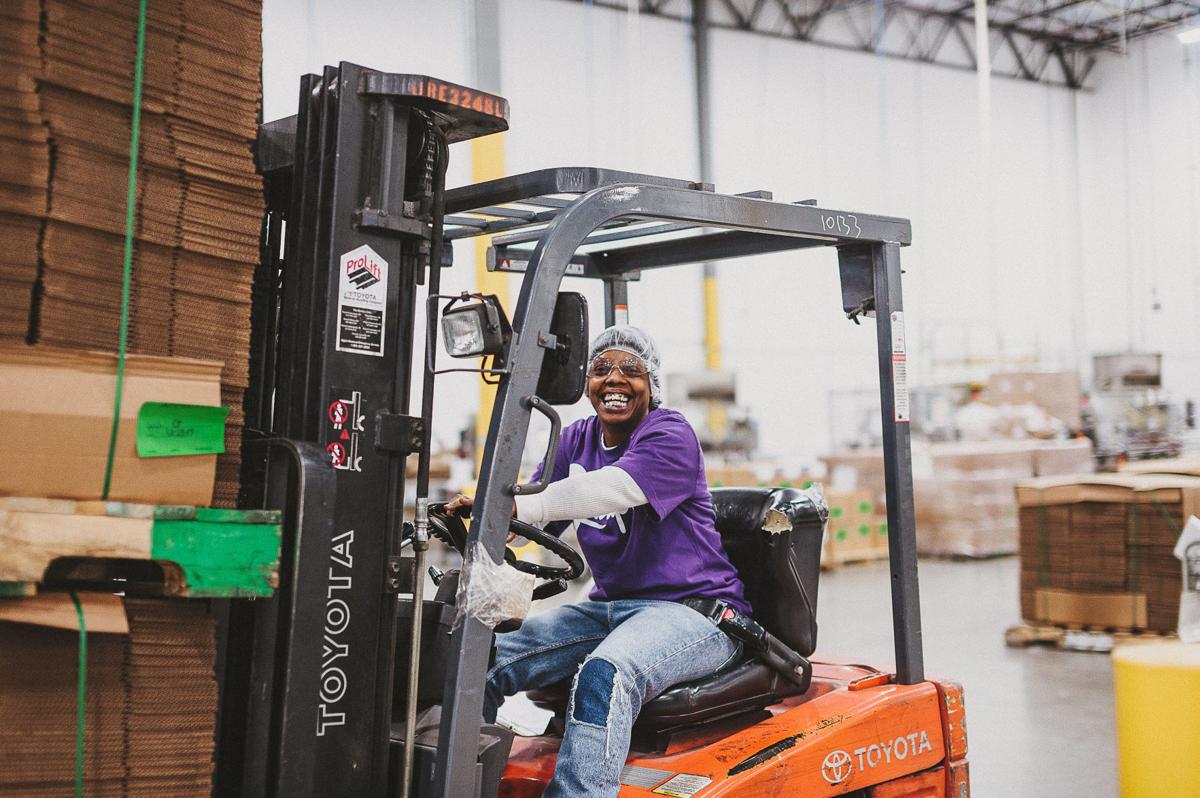 Tameka Miller once struggled with depression and low self-worth. Today, she calls herself blessed to have a job and a family at Nehemiah Manufacturing.

CINCINNATI -- Tameka Miller had never been able to hold down a job.

A woman with no family, a criminal record and nowhere to live, she was withdrawn and apathetic, bouncing from one temporary placement to the next.

So when an employment agency placed her at Nehemiah Manufacturing in Cincinnati, she assumed things would be no different.

“I had a really bad attitude. I was very bitter. I just didn’t feel like I belonged in the world, period,” the 39-year-old Miller recalled. “I had this wall up where I was just angry. You could see it on my face.”

Less than two years later, Miller's life could not be more different. Her supervisor describes her as joyful and hardworking. She wakes up every day excited to go to work. Thanks to her co-workers, she no longer feels alone.

“This family that I have with Nehemiah is the best thing that, for real, I’ve ever had," she said.

Few employers are willing to take a chance on someone like Miller, but things are different at Nehemiah Manufacturing, where the majority of the workforce are “second-chance employees.”

Many have a criminal record. Some have a history of substance abuse or mental health issues. Others lack education or work experience.

Nevertheless, the leadership at Nehemiah Manufacturing will tell you that given the right support, second-chance hires became loyal, hardworking employees who add value to the company.

Nehemiah Manufacturing was founded in 2009

The company was created to manufacture consumer-packaged goods including laundry products and baby wipes, among other items. More importantly, the factory was established to bring jobs back to inner city Cincinnati.

About six months after opening, founders Dan Meyer and Richard Palmer were asked by a local social services agency if they would consider hiring someone with a felony record.

“They said, ‘If you don’t, nobody else will and there’s no sense getting people job-ready and giving them hope if no one’s going to hire them,’” recalled Meyer, the company’s CEO.

After careful consideration, Meyer and Palmer agreed to hire a few workers with criminal records and see how it went. Today, more than 80 percent of the company's workforce are second-chance employees.

Tameka Miller faced multiple challenges before her arrival at Nehemiah. As a child, she was placed in multiple foster homes but lacked a supportive, loving family. She spent time in juvenile detention as a teenager and more bad choices landed her in prison as an adult.

After doing time, Miller moved in with an abusive boyfriend. Her criminal record made it hard to find an apartment, so leaving the relationship didn’t seem like an option. During that time, she spent many nights sleeping outside or in homeless shelters.

At first, Miller didn’t know how to articulate her pain to others or open up and trust other people.

“I didn’t want to talk to anybody. I had a big chip on my shoulder," she recalled.

She was used to being ignored, but her co-workers at Nehemiah frequently asked how she was and if she needed help. Eventually, Miller began to let her walls down and form relationships with her co-workers. One person in particular had a massive impact on her -- her supervisor, Rayshun Holt.

Holt understood many of Miller’s hardships. He spent 21 years in prison after he was convicted as a teen in a shooting incident. Holt left prison determined to turn his life around, but few employers were willing to extend a second chance to someone with a record.

Eventually, he was hired as a second-shift supervisor at Nehemiah Manufacturing.

"As a returning citizen, it was difficult finding my way into the workforce," Holt said. "Once Nehemiah gave me a chance, it gave me the opportunity not only to sustain a living, but it helped me regain a sense of purpose by having somewhere to be every day. And it gave me a chance to impact others.”

Holt said that when Miller joined the second-shift crew at Nehemiah, she was a little rough around the edges. Nevertheless, he saw her potential early.

"She was very energetic. Not only was she a good worker, but she was a fast learner," he added. “I think that it only took a few months for her to realize that if she stayed consistent and continued to apply herself that the opportunities for her would be endless here.”

Holt encouraged Miller to meet with Nehemiah's on-site social services team, which focuses on understanding an employee's individual challenges in and outside of work, and equipping them to overcome those barriers.

The team helps connect employees with resources in the community. Whether they need job training, housing assistance, food assistance or mental-health counseling, the team will help them find it.

“Getting a job and having a job is one thing, but keeping it is another,” said Dana Merida, social service and community engagement manager. “It’s hard to do your best when you don’t know where you’re going to sleep that night, or you don’t have a place to shower.”

One of the most common hurdles in keeping a job is inadequate access to transportation. So, Nehemiah offers a bus pass program that provides new employees with a daily bus pass until they receive their first paycheck.

The team also partners with other local agencies to provide internal programming to its employees. Peer counselors and addiction recovery groups from outside organizations meet on Nehemiah’s campus.

Workers at Nehemiah can take classes on personal finance and computer literacy as well as leadership and development. The company also provides lunch-and-learn sessions and a customized education program, which guides employees through the process of acquiring a GED or pursuing higher education.

After meeting with the social services team, things started to improve for Miller. She was eventually promoted from working on the line to becoming the company’s first female material handler. Now she works as a forklift driver.

Today, the word “blessed” rolls off her tongue often and with ease. For the first time in her life, she owns a car and rents her own apartment. She sleeps peacefully at night. She has begun to watch out for and encourage Nehemiah’s new employees, just as her co-workers once did for her.

“Since I’ve been at Nehemiah, I have hope for myself. I’ve got this glow on my face that I didn’t have when I started,” she said. “I smile all day. That was so hard for me to do a year and a half ago.”

Holt has also been promoted within the company. He's currently serving as commercialization coordinator.

“What I’ve learned is that you’ll be hard-pressed to find an employee more loyal than the person who needed a second chance that you were willing to give a second chance to,” he said. “There's value in every human, I believe. Hiring second-chance people, not only is it a profitable business model, it's just the right thing to do.”

Nehemiah's CEO Dan Meyer will attest that building such a unique support system took time and effort, but was undoubtedly worth it.

The company has grown significantly over the last decade and dramatically reduced its turnover rate.

Before integrating a social service team into the company fabric in 2010, the turnover rate at Nehemiah was similar to the industry average.

“We were still losing our second-chance workers because we didn’t fully understand all the other challenges you face when you’re coming out of prison,” Meyer said. “There's a number of pillars that are needed and social workers understand that.”

In 2018, Nehemiah's turnover was 15 percent -- less than 40 percent of the national average at the time. The money that the company saves in onboarding and training costs can then be reinvested in the business and its workers.

“We’re not sacrificing profits to do this,” Meyer said. “We’re able to fund it all because we’ve got hardworking people doing a great job, accomplishing great things, which translates to a much more powerful bottom line."

“It’s a proven model that you can do great things and still make money.”

The model has been so successful that Meyer went on to found the Beacon of Hope Business Alliance in 2015. The alliance works to educate other businesses on the benefits of providing second-chance employment and offer advice on best practices and resources for doing so.

The biggest piece of advice Meyer has for those companies is to create a system that will support its second-chance employees by partnering with local social service agencies and adding an on-staff social worker, if possible.

“You’ve got to say, 'I’m committed to doing this.' You've got to have the infrastructure,” Meyer said. “This doesn’t work without the ecosystem that we have. And every city has one.

"There’s always somebody that’s working with those that are coming out of prison or have drug and alcohol addiction issues.”

When creating that structure, it's important to ask employees what their needs are, then structure employee benefits around them. Having the flexibility to change what isn’t working is key when shifting a company’s culture.

“We have learned as we’ve grown,” Merida said. “We are constantly changing our approach and what we bring in house and our community partners.”

Lastly, it's crucial for employers to treat second-chance employees with compassion and grace.

“It’s so easy to make up your own mind when looking at a person’s criminal record, but when you take the time to actually find out what was going on in that point in their life, you’ll be amazed how open that person will be because you’re talking to that person as a human being and not as a criminal,” Merida said. “You’re showing that you care and that goes a long way.”