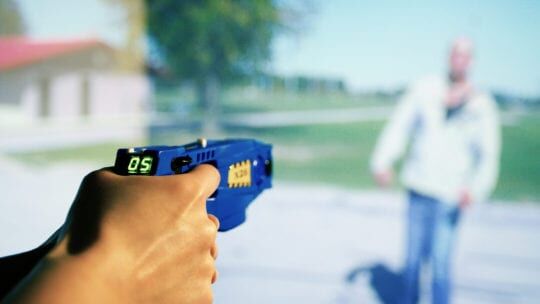 A law enforcement officer armed with a Taser participates in a MILO simulated training session. 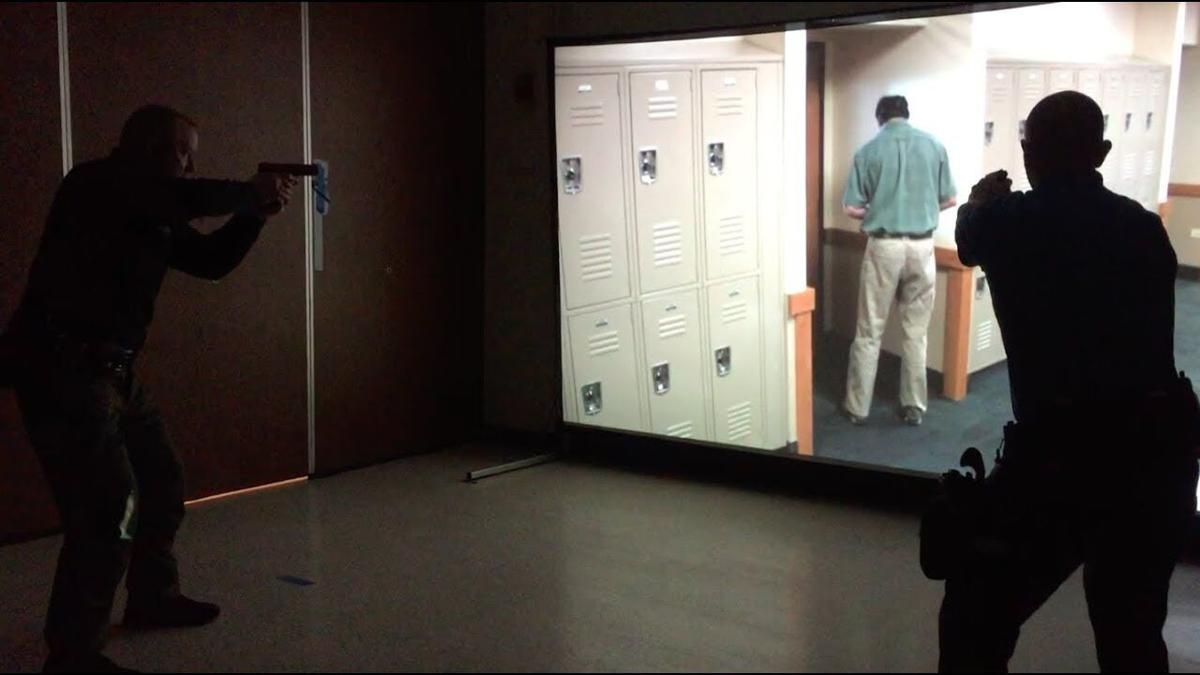 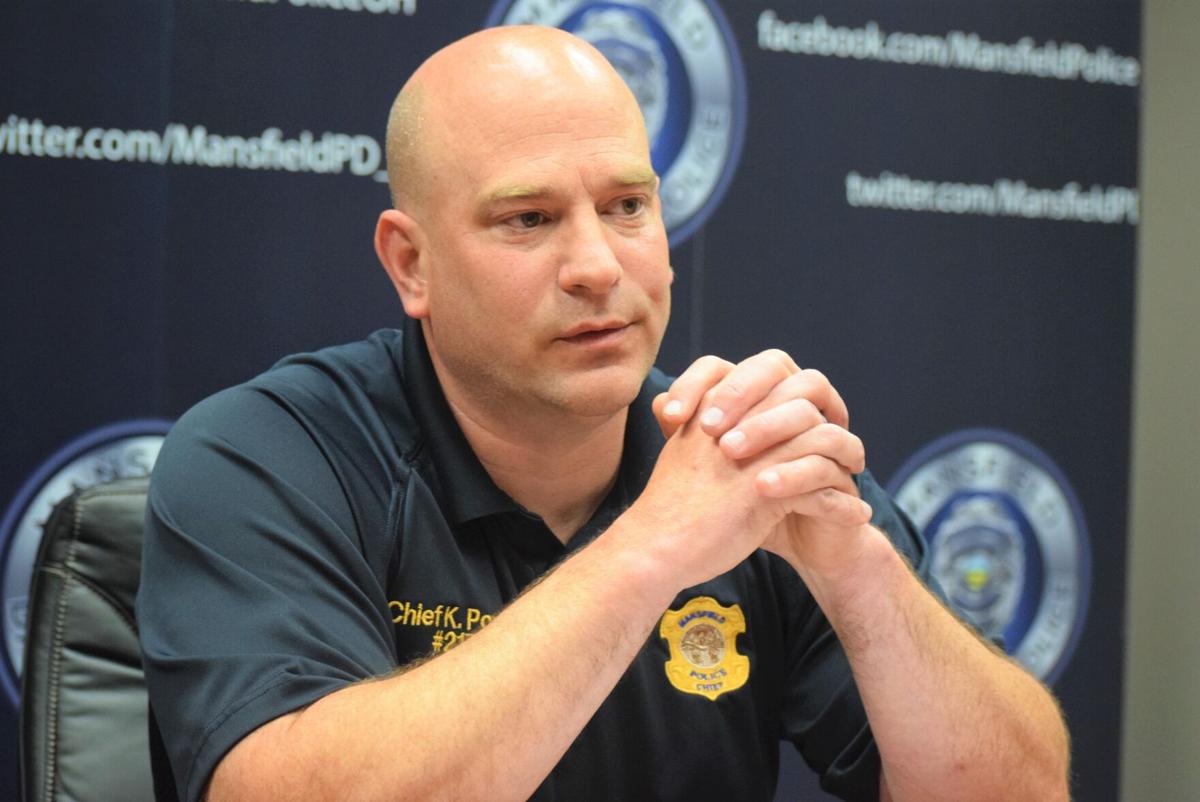 MANSFIELD -- Imagine you are a police officer facing a man armed with a gun. What if you were that same officer on a traffic stop and the female driver suddenly brandishes a knife? Or perhaps you are dispatched on a domestic violence call and arrive to find a fight in progress?

What would you do?

Those are some of the situations law enforcement officers around the country face on a daily basis. Experts have said training is the solution for improved resolutions.

A new $135,820 grant from the Richland County Foundation will help move Mansfield Police Department training into the 21st century, according to Chief Keith Porch.

The grant, accompanied by $20,000 from the Mansfield Law Director's Office, will allow the department to buy a Multiple Interactive Learning Objectives (MILO) simulator to train officers in de-escalation techniques and appropriate use of force.

"When you look at the number of incidents around the country involving police shootings, where mistakes occurred, a majority of those mistakes are made because of training, in my opinion," Porch said.

"Everyone who donated, whether it was $1 or $20,000, helped us get to our final goal," Porch said. "I am beyond overjoyed the Foundation approved funding for us. The fact different people also stepped up to help us is just fantastic."

The chief said he would make the simulator training available to any law enforcement agencies in Richland County. Mansfield City Council is scheduled to discuss the project during its caucus on Tuesday evening.

The MILO simulations require law enforcement officers to respond to scenarios they will encounter in the field, ranging from armed suspects to domestic violence issues and traffic stops.

Often, an officer must make a split-second decision and Porch said, "If he makes a mistake, I would rather it be in training rather than on the streets."

Every session is recorded and an instructor goes over each incident with the officer, examining how the officer responded and things he or she could have differently.

Officers likely begin each scenario with attempts to defuse the situation, including verbal commands. Depending on how the citizen reacts, the officer may have to choose between doing nothing, using pepper spray, a Taser, or perhaps lethal force.

It's a training system being used by more and more law enforcement agencies, including the Bureau of Alcohol, Tobacco, and Firearms in Phoenix.

"This is where you see the First Amendment, the Second Amendment, and the Fourth Amendment all converging," Eric Fox, ATF Phoenix Field Office Assistant Special Agent in Charge, told AZFamily.com in May.

"You can show up to motor assist on the interstate, someone be armed you don't know, they could be passed out behind the wheel having some type of psychotic episode, or some type of excited delirium," Karsner said.

"Part of the stress that comes with that is second guessing yourself a lot of times. For years, I've done an internal debrief sort of in my head," Karsner said. "For most contacts that end up with situations like where we have to use force in every circumstance, I've gone through my head like what could I do better the next time, or how could I have done things differently.

"What could I have said to make this person feel more at ease?"

Porch said this search for simulator training began 2 1/2 years ago when he was the assistant chief. Recent national events have only served to deepen his resolve for the project.

"It was important enough to me to approach Chief (Ken) Koontz to inform him this needs to be a priority and that we need to do a better job of training our officers," Porch said. "This would take our training into the 21st Century."

Porch said he searched for federal and state grants to help fund the project, but found none available.

Porch said he approached the Richland County Foundation and approval seemed likely. Then the COVID-19 pandemic hit in the spring of 2020 and funds were needed urgently in other places.

"I told them I totally understand and that we would apply again next year," Porch said.

"Absolutely," Groves said. "We have been talking to Chief Porch for a couple of years now, but everything that has happened in the last year or so has raised an awareness that this kind of police training instruction is vital to the community."

"Chief Porch has shown a commitment to officer training. We felt this real time simulated training, allowing time to pause, coach and teach was an important tool.

"Plus, it will give the community an opportunity to better understand what officers face in real-time situations. We liked the idea that Chief Porch wants to make it a teaching tool for the entire community," Groves said. 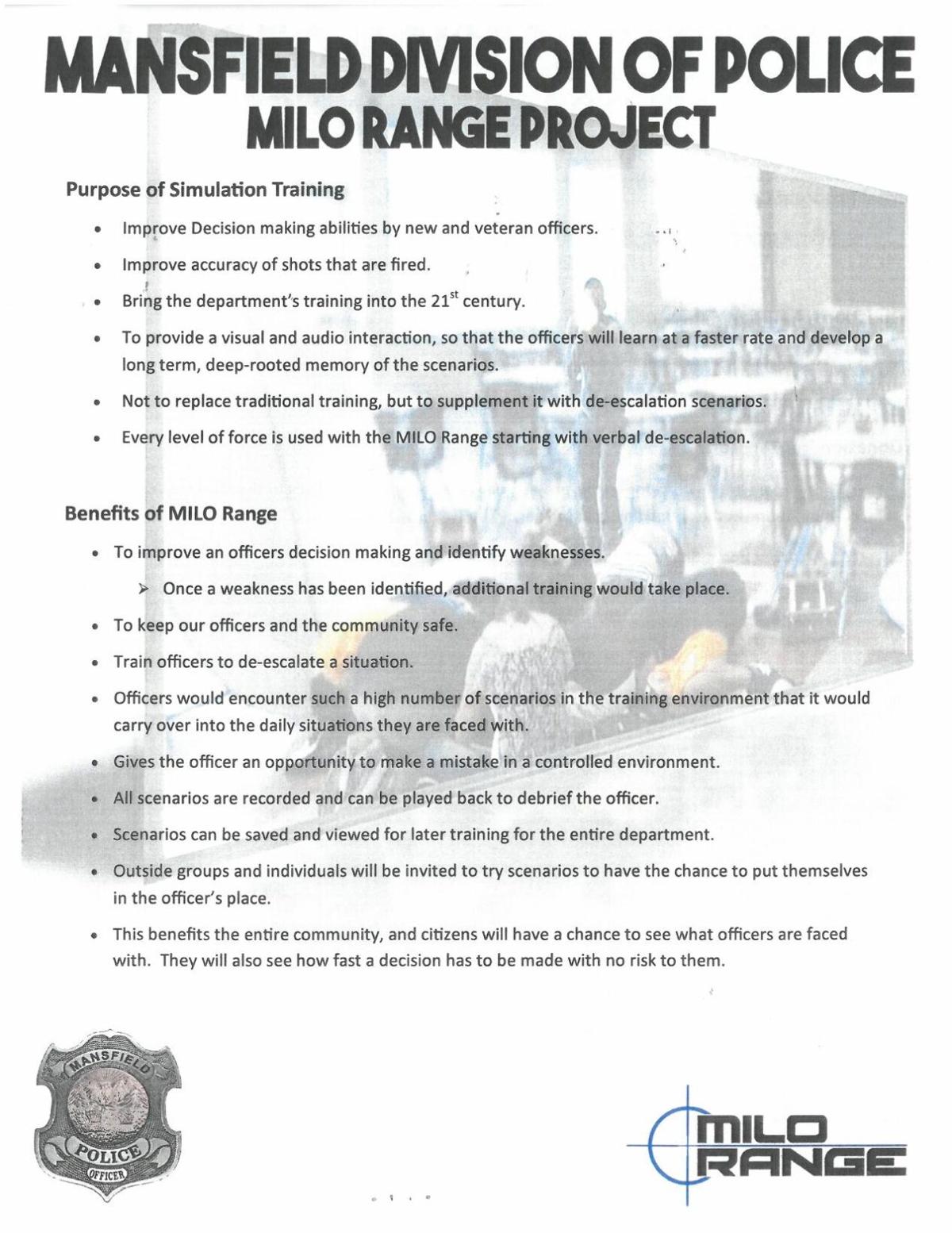 Porch said the MPD's former indoor gun range is the perfect place to locate the MILO training simulator. The range inside the municipal building had to be closed in 2017 for lead clean-up and a new outdoor range has since been built near Mansfield Lahm Regional Airport.

"With the indoor range no longer being used, we had a suitable location (for the simulator)," Porch said. "It was the perfect spot. If it was still being used as an indoor shooting range, there would have been no place to do it inside the police department."

The chief said he wanted a site to permanently install the trainer, reducing the chances it could be damaged if it were mobile and had to moved to various locations.

"Our officers have to qualify with live fire four times a year, once per quarter. My goal would be for them to qualify at the outdoor range and then come back to the department and train on two or three scenarios," the chief said.

"When you talk about simulations, these things have advanced so much in the last 15 to 20 years," Porch said. "It was important to me that all levels of force are covered in the training.

"Officers start at verbal de-escalation, verbal commands, pepper spray, baton ... not just the decision over the use of lethal force. This is not just 'shoot/don't shoot' training," the chief said.

Porch said the MILO system has about 1,500 different scenarios and produce about 100 new ones each year. He said the MPD could also produce its own scenarios.

"We can train officers at all levels with this simulator," he said. "Patrol officers ... there are SWAT scenarios ... detectives. No matter what speciality position you may hold, there are scenarios for that.

"Will (the MILO training) remove the risk of officers making mistakes? No. But if you're going to make mistakes, you want them to make them in a training environment.

"No one ever complains about training. The officers and the trainer can do the scenarios and then play them back. If the officer responded incorrectly, it's a teachable moment in a controlled environment.

"The goal is to have a better performing police officers during critical incidents," he said.

"If the officer is doing appropriate things (during the training), the trainer will listen ... and he can divert the scenario to end with a peaceful resolution. If not, things can go horribly wrong."

"Even if an officer does all the right things, it can go horribly wrong. Verbal de escalation is not a magic bullet that always works," he said.

The chief said the MILO simulator will go beyond just the officers.

"Not only is this important for officer training, it's also part of public awareness, including the civilian review board, others in the community, showing what officers face on the streets," Porch said.

The chief said, if City Council approves, he hopes to have the simulator installed and operational by the end of 2021 or the first quarter of 2022.

Mansfield Board of Control approves $303,400 for Getz Builders to construct police training facility

The Mansfield Board of Control on Tuesday morning approved a $303,400 proposal from Getz Builders to construct an indoor classroom police department training facility.