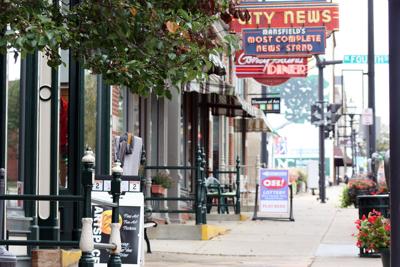 MANSFIELD – When an opportunity recently presented itself to Richland County, the community came together to make the most of it, according to the Richland Community Development Group economic director Barrett Thomas.

At T-minus two weeks, Thomas and about a dozen other representatives from local organizations joined efforts to submit several census tracts in Mansfield and Shelby for the chance to be designated as “opportunity zones” by Governor John Kasich.

The Opportunity Zones program was established by Congress in the 2017 Tax Cuts and Jobs Act with the intention to spur long-term private sector investments in low-income communities nationwide. Through a series of tax incentives, investors are encouraged to reinvest their unrealized capital gains into distressed communities that are designated as opportunity zones.

“The problem they’re solving is economic recovery since the recession. It’s been wildly uneven. You can kind of look through here and point out major metropolitan areas,” Thomas said, pointing to a map designed by the Economic Innovation Group.

It shows how places across the country have recovered since the 2008 recession.

“You can tell how this is uneven. These people in Wall Street think it’s fixed, it worked,” Thomas said about the large portion of prosperous areas shown in blue.

“But these people disagree,” he said, noting other sections of the country.

He first pointed to the Southeast, with noticeably more red than blue dots. Then, his attention shifted slightly northwest. His finger stopped directly above Richland County, Ohio. This too was colored red.

Richland County has 13 "distressed" census tracts eligible to become opportunity zones, 11 in Mansfield and two in Shelby. Ohio has about 1,300 eligible census tracts.

“Let’s go drop some cash in these distressed places (called opportunity zones), leave it there for a decade and see if we can make a difference,” Thomas said.

Each state’s governor will choose only 25 percent, 319 tracts in Ohio, to become opportunity zones.

“Part of the structure of the program is to focus the capital into just a few places to try and move the needle,” Thomas said. “So instead of dropping money anywhere in the country where things aren’t going well, they’re going to boil this down to what are the places that make the most sense and aim to really move the needle with these specific places.”

“Small urban cities such as Mansfield and Shelby have not seen the job growth and capital investment that Columbus or even Cincinnati has enjoyed during the economic recovery of the past few years," Shetty said. "Being designated an opportunity zone could encourage residential redevelopment in affordable quality housing and investment in local businesses and startups in our most distressed low-income neighborhoods.” 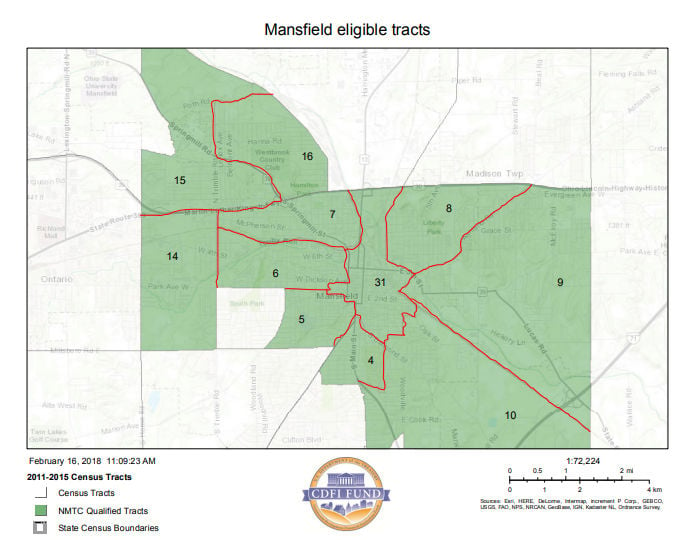 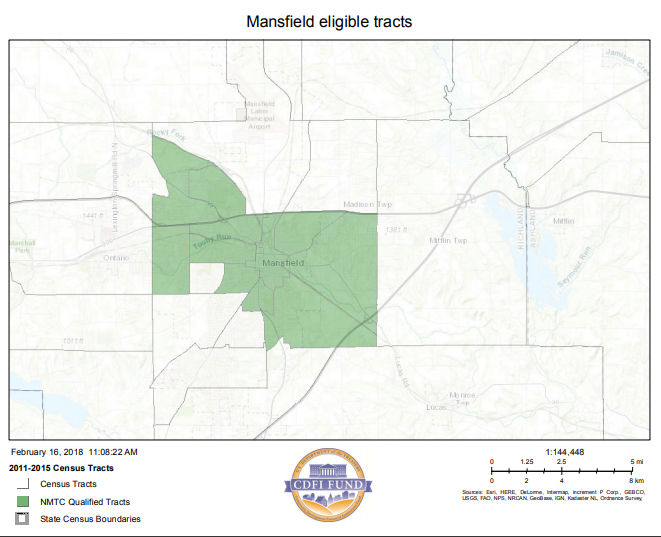 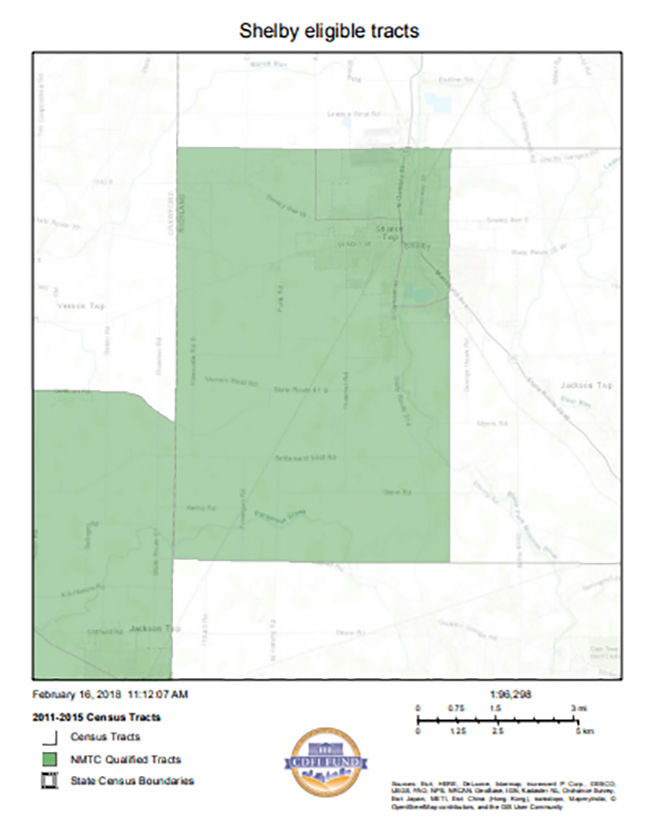 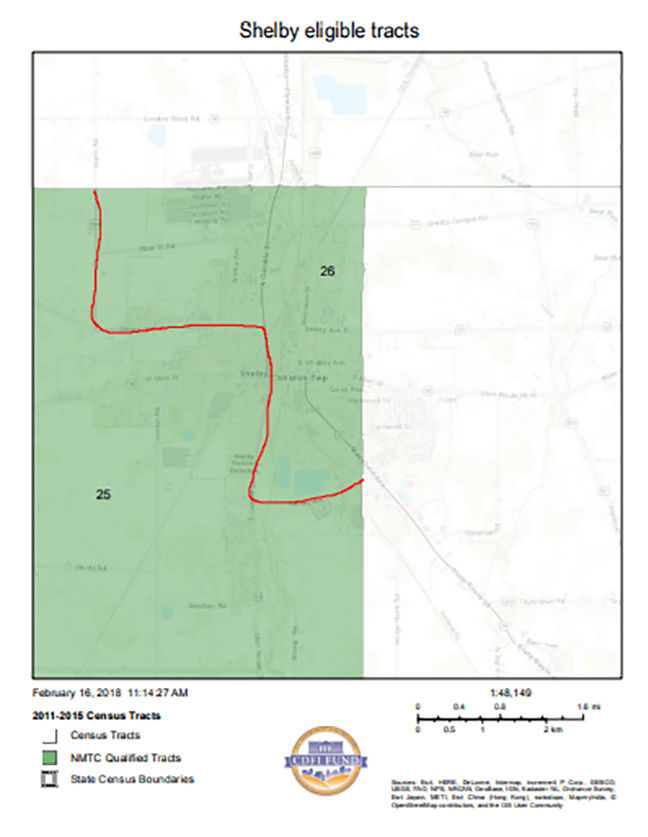 Specifically, she mentioned potential in census tracts 6, 7 and 31, which are already focus areas for The North End Community Improvement Economic Development Plan and the City of Mansfield Consolidated Plan.

“This comes at a very opportune time as the city and the land bank have continued to acquire land and demolish blighted property allowing for infill building,” she said.

“Those all have pretty good opportunities, but it’s a matter of describing to the state why they should pay attention to these and convincing them that there are investable opportunities here,” he said. “Investors will be looking for, where’s money already going that we can jump in on?

"If stuff is already happening there, we can probably add new projects, too.”

Thomas predicts that some of the “best” distressed communities will be the ones chosen as opportunity zones. When prioritizing the submitted tracts – which was required when applying – he emphasized ongoing efforts. This, Thomas hopes, will prove that opportunity exists, that people have already invested their time and money to better these places.

If any of the census tracts in Richland County become designated as opportunity zones, investors will receive tax incentives to support projects, called “Qualified Opportunity Zone Properties,” in that tract.

If investors put their capital gain dollars in the Qualified Opportunity Fund, they don’t immediately have to pay their capital gains taxes, which is currently at 20 percent. If they leave that money there for five years, they will receive a 10-percent discount on those taxes.

After seven years, it’s a 15-percent discount. At this point, whether they leave the money sit awhile longer or not, investors must pay the tax.

“Later is always nice for investors,” Thomas said. “At the end of seven years, you do have to pay the tax because you do owe it, but you get a discount and you got to wait for seven years.”

But, there’s further incentive to leave that money alone for a while longer. After 10 years, whatever money they’ve earned inside the Qualified Opportunity Fund can be taken out tax free. If removed earlier, the individual must pay tax on any money they make.

“The idea is to get a bunch of people to drop some cash into these funds and leave it there for 10 years. The fund is going to invest in those distressed zip codes that they’ve identified and leave the money there for 10 years to try to make a difference.”

Thomas sees the business properties as the most likely candidates locally. Only one business in Richland County, the Gorman-Rupp Company, is traded on the New York Stock Exchange, and it isn’t contained in one of the potential opportunity zones anyways.

The fund, for example, might buy a building and lease it out.

“The point of this is to say, we don’t want them to be passively making money off this," Thomas said. "We want them to be actively engaged in and investing in a company or a building that’s really in those zones.

“They need to invest genuinely.”

This means no loans from the fund.

“The idea was they don’t want investors lending and being like a bank," he said. "They want them investing in the company and taking that ride up and down with the company, literally invested.”

There will be no investments from the opportunity fund used for “sin businesses” This includes private or commercial golf courses, country clubs, massage parlors, hot-tub facilities, suntan facilities, racetracks, other facilities used for gambling and any store where the principal business is the sale of alcoholic beverages for consumption off premises. Investment in bars is allowed.

How Richland County came together for this opportunity

Thomas first heard about opportunity zones in a Feb. 14 webinar, which triggered a two-week rush to get Richland County’s 13 eligible census tracts submitted for the chance to become opportunity zones.

He recalls the forum to suggest tracts opened Feb. 16 and stayed open until March 2.

Thomas identified key people and organizations in Richland County and asked if they could get together, despite the short notice.

“So, an opportunity comes up, we issue a call, say we need you to do stuff, and they all said, ‘Yeah, OK.’”

The group met on Feb. 23, and by Feb. 28, everyone had sent back a prioritized list of “what is going on” in each of the census tracts they were involved in. Then, the list was organized by Thomas and submitted March 2 before the 4 p.m. deadline.

“The cool thing was how fast we could get this done,” Thomas said.

Of course, none of this guarantees any investment will be made in Richland County’s 13 census tracts. But officials believe it’s an opportunity worth exploring.

If any of the tracts are designated as opportunity zones by Governor Kasich, there’s a chance investors won't buy in and be interested in the incentives.

“Paying the 20 percent (capital gains) tax isn’t that bad … So the incentives they have to do this may or may not work to capture a large amount of money,” Thomas said.

But if it does work, he believes the program has huge potential.

Because the dollars involved in the Qualified Opportunity Fund are private capital, they can get into these distressed communities faster than other money, which can take years sometimes, Thomas said. Communities could be transformed from distressed to prosperous.

But even if this opportunity falls through, Thomas and others like County Commissioner Marilyn John are optimistic about the future.

“We have a lot of momentum going on in the county,” John said. “Right now, I’ve seen the greatest collaboration amongst organizations that I’ve seen in my eight years in office, and others say the same.”

So, if not this opportunity, maybe there’s another out there. Richland County leaders believe this community is ready for it.

Three Richland County census tracts were chosen this week by Governor John Kasich to be designated as "opportunity zones."