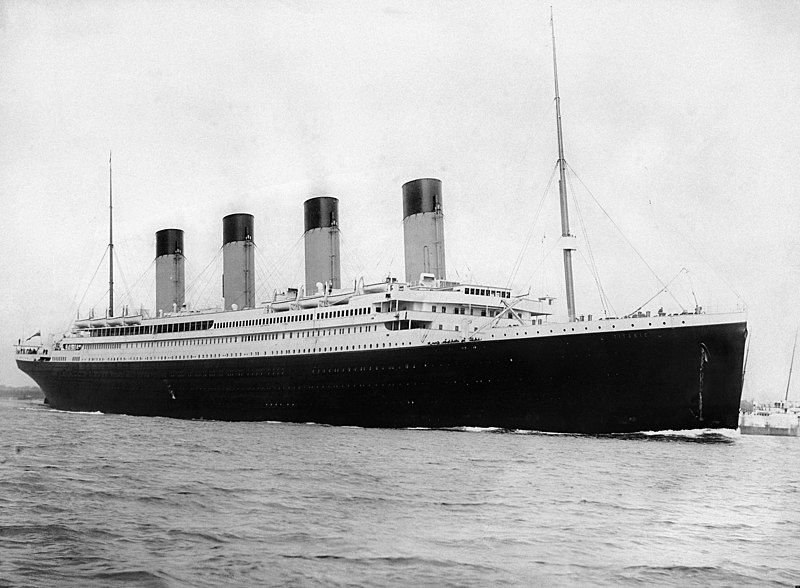 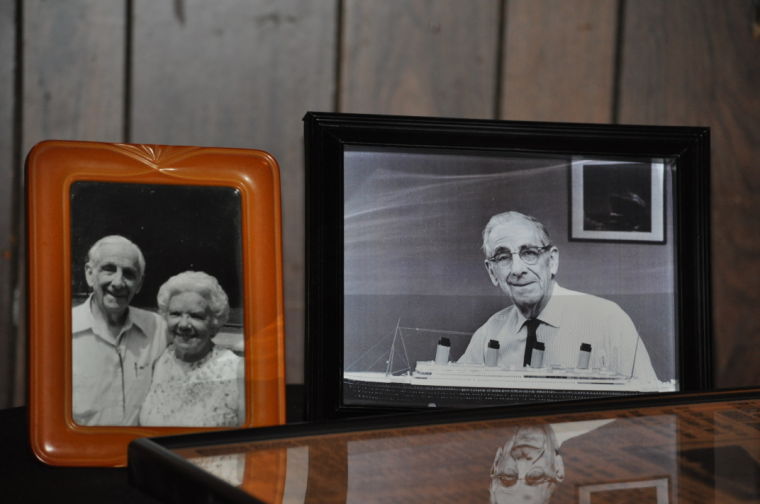 Tom Goldsmith shared photos of his grandparents Frank and Victoria Goldsmith at 2013 Colony Club meeting. Frank Goldsmith was enroute from England with his parents on the Titanic when the ship sank. 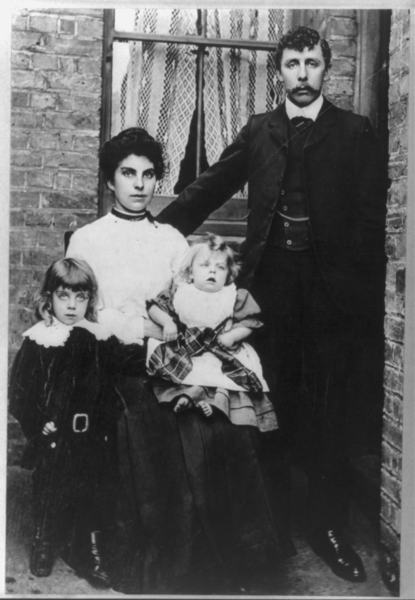 Frank Goldsmith Sr., is standing for a family portrait with his wife, Emily, and sons Frank, left and Albert, in Emily's lap. The portrait was taken several years before Albert's death from diptheria and before the remaining family boarded the Titanic. Frank Sr. did not survive the voyage.

EDITOR'S NOTE: This story is in response to a reader submission through Open Source, a platform where readers can submit questions to the staff.

MANSFIELD -- Our tragic story was set to publish at approximately the same time on another Sunday night, 107 years ago, that Royal Mail Steamer Titanic scraped across a huge iceberg in the North Atlantic. That accident, which ripped a 300-foot gash in the hull below the ship's waterline, began the demise of the luxury British steamship.

The vessel sank in the early hours of April 15, 1912, leading to the deaths of more than 1,500 passengers and crew. Among the approximately 675 survivors rescued by the cruise ship Carpathia was a little boy named Frank Goldsmith Jr., who, with his parents, was a third-class passenger on the ship.

Frank Goldsmith Jr., was born in Strood, Kent, England, in 1902. The family was coming to America so the elder Goldsmith could find work in Detroit's auto factories.

Interestingly, what woke the Goldsmith family that night was the silence. The enormous propellers stopped turning, a sound the family couldn't help but notice their first three nights on board. Like most men, the elder Frank Goldsmith stayed on board as women and children were first to the lifeboats.

Frank Goldsmith went down with the ship. Frank Jr. and his mother Emily went on to Detroit as originally planned. Frank Goldsmith Jr. eventually settled in Ashland, where he and his wife, Victoria, operated a photography supply shop in Mansfield.

Richland Source: How old were you when you realized your local connection to Titanic?

Michael Goldsmith: I cannot remember not knowing my grandfather's story.

Richland Source: Did your grandfather ever tell you the story directly?

Michael Goldsmith: Yes, I believe he shared his story with me.

Richland Source: Is it something he talked about frequently, or not at all?

Michael Goldsmith: He did indeed share his story frequently. He visited classrooms, as in the story posted to me by a friend on Facebook, he told it to church groups, and social clubs throughout the area's surrounding Mansfield. He was a member of the Rotary and the Photography club. He did interviews on both The Morning Exchange and The Afternoon Exchange.

Richland Source: Did he convey any impressions of the ship or that particular night?

Michael Goldsmith: Yes, he spoke of the ship as well as the events of the sinking. He and some other boys learned that the cables were greased while trying to cross them playing a form of follow the leader. His account of the sinking was, as Dr. Ballard proved, was very accurate. His mother had clasped him to her breast so that he wouldn't witness the sinking. He described how the stern rose into the air until it was almost vertical. Then settled back to the horizontal, during this process his mother released him and he heard people say "Look she is going to float" and so he was able to witness the stern sinking. From his description, since it made no mention of the ship as a whole, that his position was near directly behind the ship. His description further indicates the ship breaking in two. He mentioned the tremendous noise while she was in a vertical position, which would coincide with engines, boilers and other machinery breaking loose and entering free fall to the bow.

Richland Source: Did your grandfather ever travel by ship again?

Michael Goldsmith: Yes, he and his mother made several trips to England and back as can be shown in the records of Ellis Island in New York. He also traveled at least twice on ocean liners with my grandmother. Two times on the Queen Mary.

Richland Source: How do you think the tragedy affected his future, losing his father, etc.?

Michael Goldsmith: He always thought he would see his father. He grew up just down the road from Tiger Stadium in Detroit, but never went to a game. The roar of the crowd always reminded him of the night he lost his father. He met or knew just about every fellow survivor and kept in contact with many throughout his life. His mother, who is buried in Ashland Cemetery, helped form a sewing circle on Carpathia to make clothes for those who only wore night clothes into the life boats. In so doing, lifelong friendships were made.

Richland Source: Have you ever gone to any of the exhibits for Titanic, and your impressions, if so?

Michael Goldsmith: I do not travel much anymore, so no I have not been to one. From what I have heard you get a boarding pass with a the name of a passenger or a family on it. I am guessing their story is on it as well so that you feel connected to the tragedy.

Richland Source: Did the movie Titanic have a personal impact on the family?

Michael Goldsmith: I am unsure the movie had any real impact on the family at all. Most people I spoke to about the movie have the impression that the story line really happened or could have happened. Very few had any idea that real events during the tragedy were depicted in the background while the characters went through their lines.

Richland Source: Anyone else in the family talk about the incident?

Michael Goldsmith: My brother, Tom, speaks frequently on the subject or used to at least.

Editor's Note: Indeed, Tom Goldsmith shared his story locally in 2013, which was covered by Richland Source.

Richland Source: Have you ever met any other descendants of Titanic survivors?

Michael Goldsmith: Yes, I became friends with a man whose great aunt was also a survivor.

Richland Source: Is there anything you or the family do to mark the anniversary of Titanic?

Michael Goldsmith: I do not remember ever marking the anniversary of the sinking in any way.

Michael Goldsmith: I am sorry I have nothing digital to upload. My grandfather during World War II worked in the photography department for the U.S. Army Air Corps. His mother remarried a man named Harry Illman and they are buried in Ashland City Cemetery. Not far from them is a marker in honor of my grandfather at the foot of the grave of one of his friends. His ashes were spread over the area where she went down just a few years before she was found by Dr. Ballard.

On a side note: a few years ago the traveling exhibit was at COSI in Columbus. They had a replica of the main staircase aboard Titanic. They held a drawing and the winner would be able to get married on that staircase. My nephew, Benjamin Goldsmith, won the drawing and subsequently got married on the staircase.

Many things changed after the tragedy. Shipping lanes were moved south, the International Ice Patrol was formed, radio operators were no longer employees of Marconi and manned their radios 24 hours a day and life boats were based on passenger and crew numbers instead of the ships displacement.

While stationed in Washington, D.C., I had dinner at the home of one of the lawyers hired by the French Salvage Company, who sued for the rights to salvage Titanic.

Do you have a question for the newsroom? Submit a question below, and we might respond to your's next.