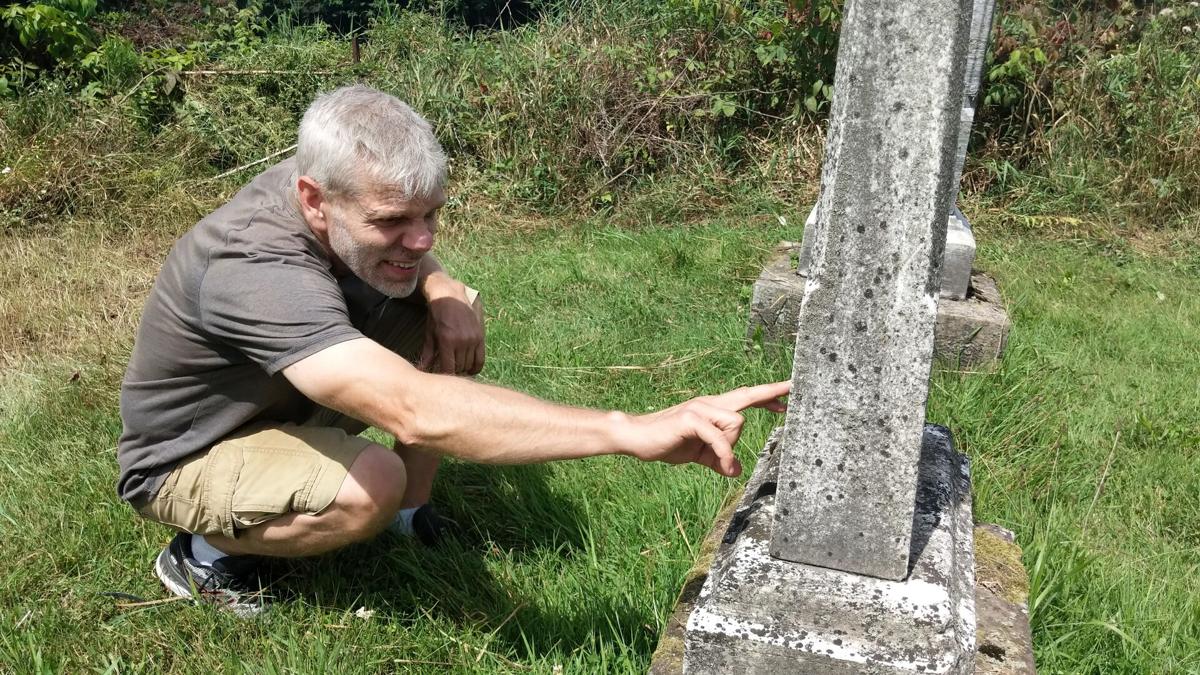 Ronny Echelberger reads a faded inscription on a headstone at Pine Run Cemetery. 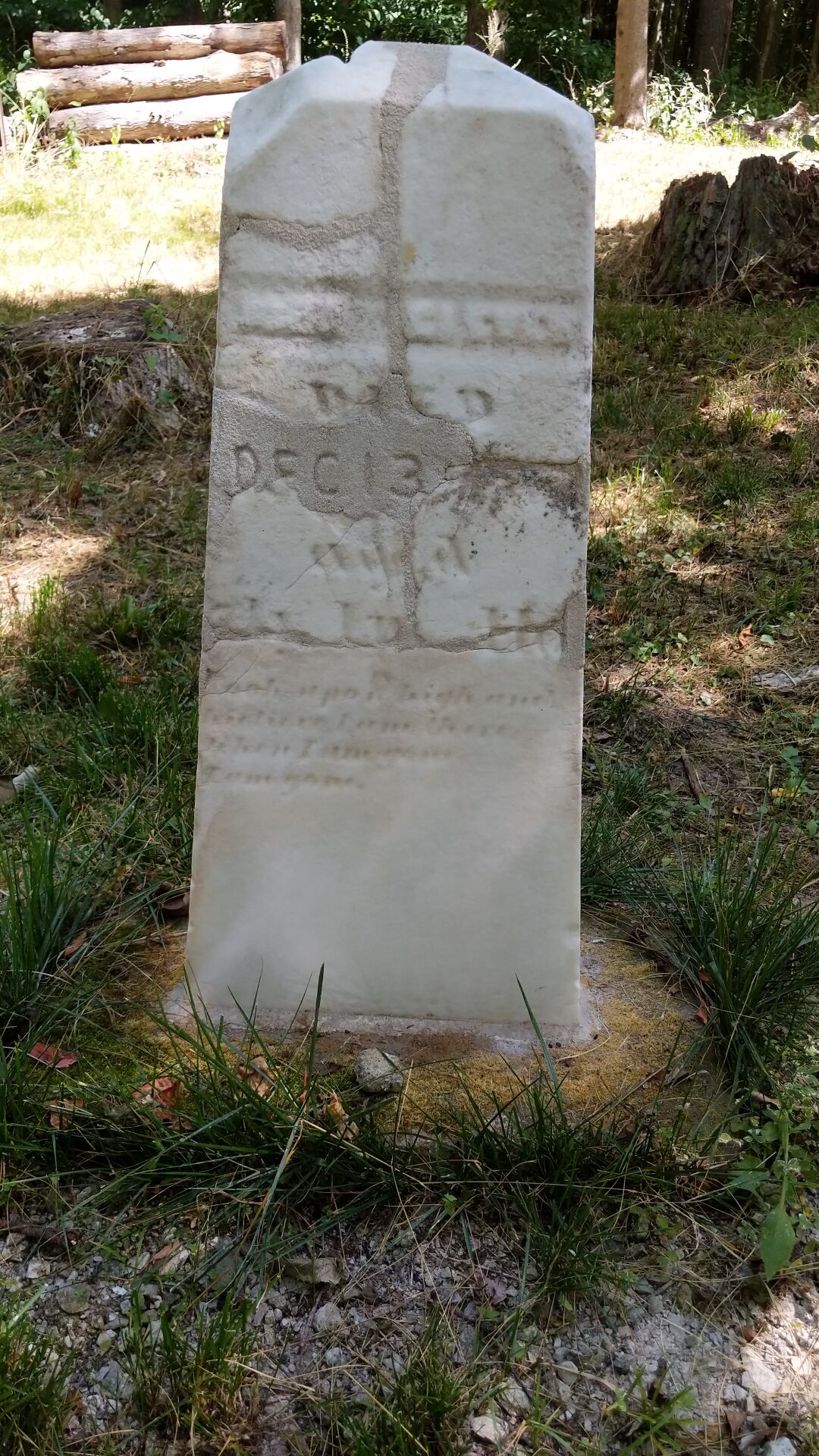 A gravestone at a small cemetery in the woods near Butler, Ohio. Ronny Echelberger restored this stone, which was in seven pieces, in 2017. 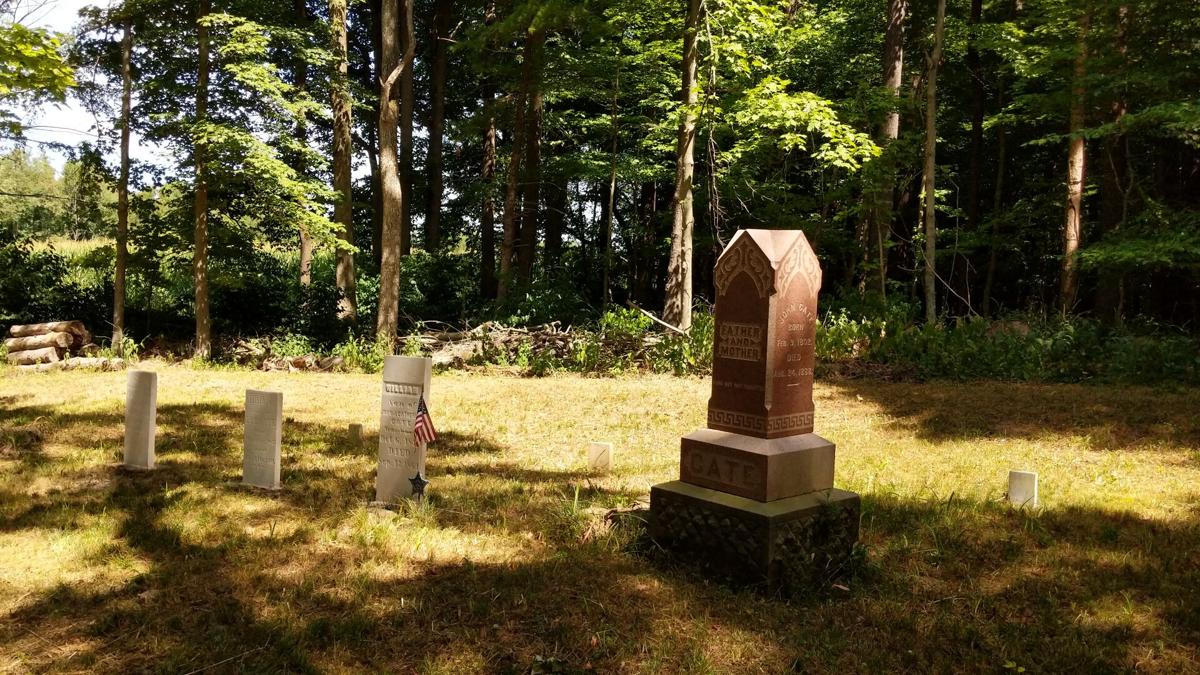 A ten plot cemetery in the woods outside Butler, Ohio. When Ronny Echelberger began his preservation project three years ago, the graveyard was covered with brush and fallen trees. 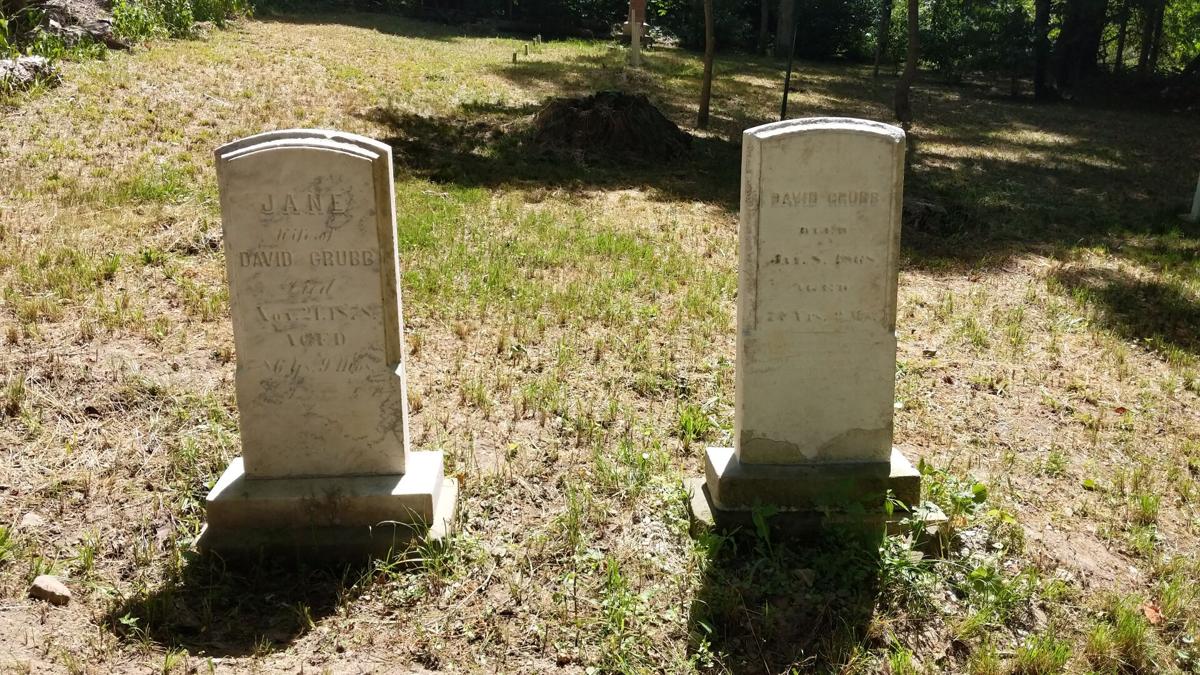 Echelberger's preservation works involves cleaning headstones with a biocide that gets rid of mold and mildew, making the stones more legible.

EDITOR'S NOTE: This story idea was suggested by Teri Brenkus. Do you have a story idea for Richland Source? Submit it through our Open Source forum.

BUTLER -- The graveyard sits near the bottom of a hill, surrounded by farmland and hemmed in by a tree-lined horizon. There’s a hum of car engines on a distant highway, but it’s barely audible against the endless chorus of cicadas and songbirds. Stone markers litter the grass -- some standing, some leaning, some laying flat.

There is no parking lot or pathway to welcome visitors -- just an old wooden sign with “Pine Run Cemetery” in faded letters. Below it, a second sign issues a disclaimer: ENTER AT YOUR OWN RISK. 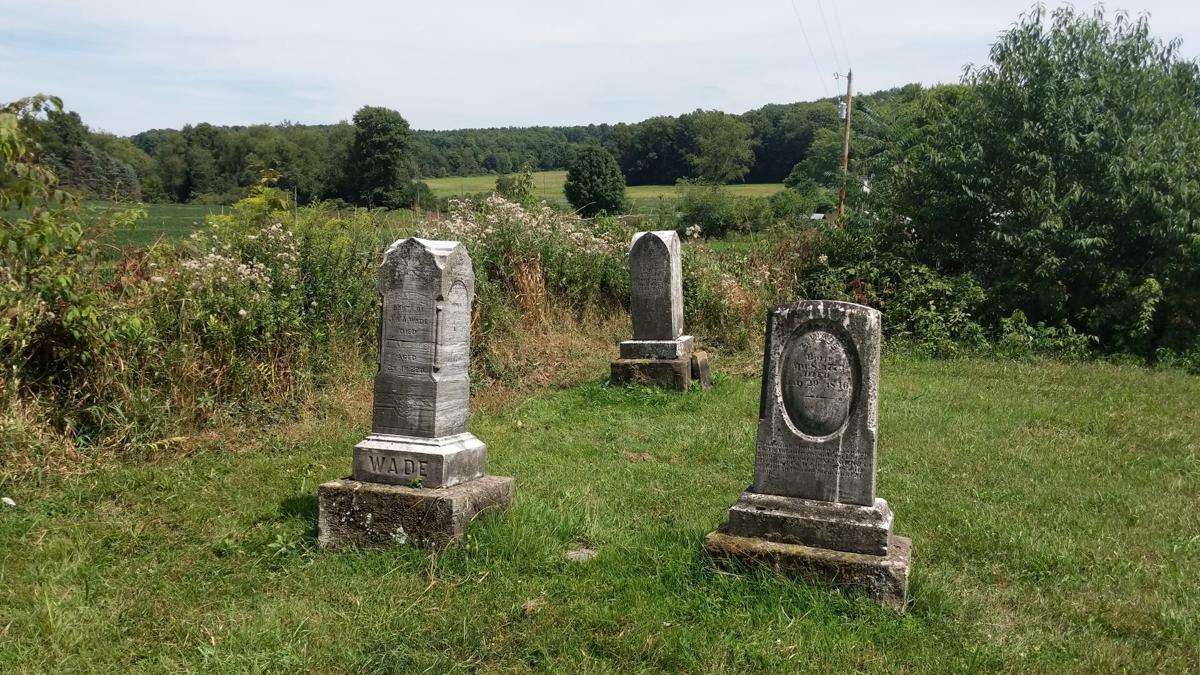 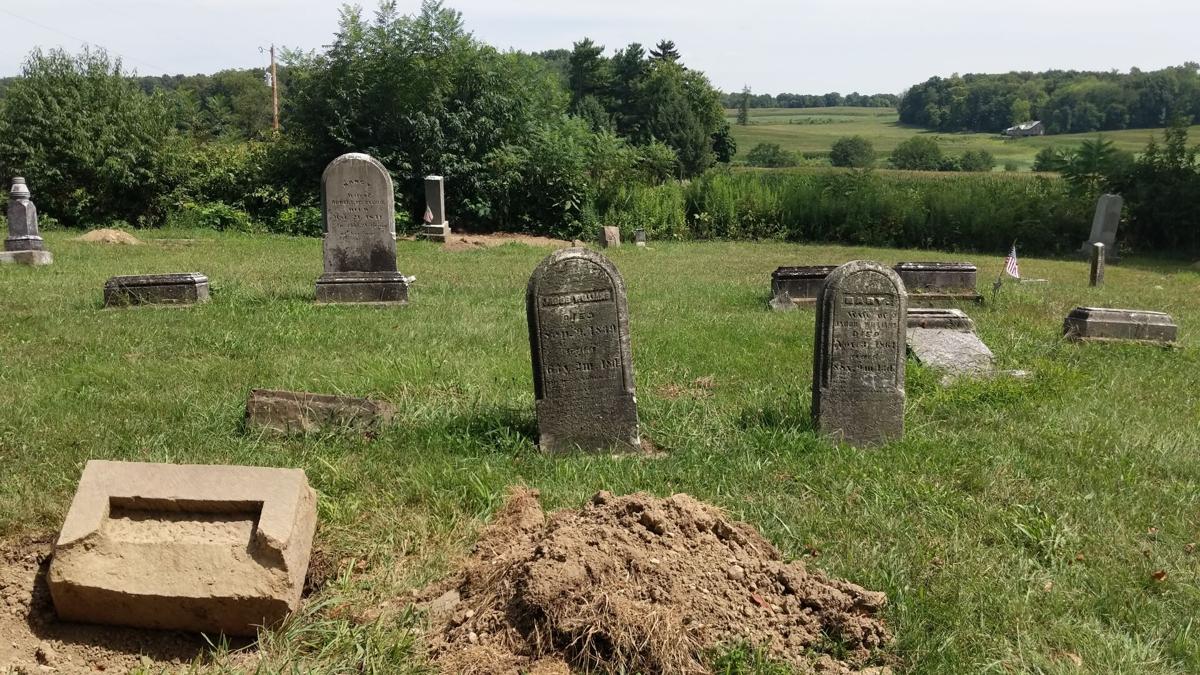 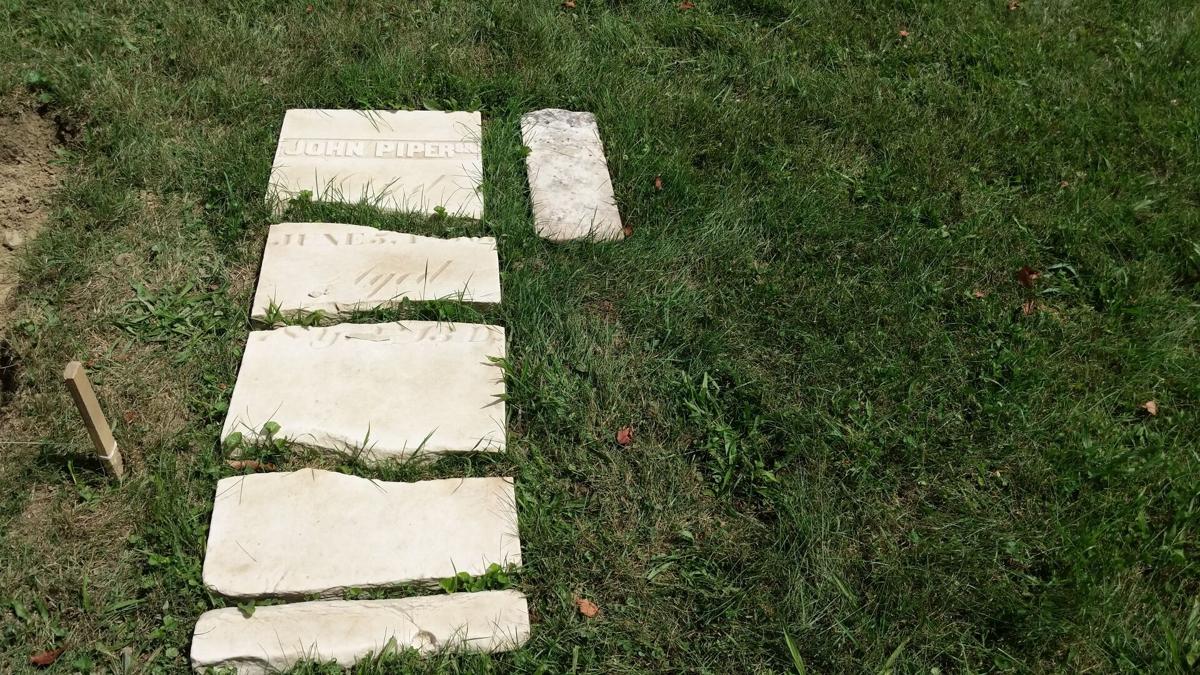 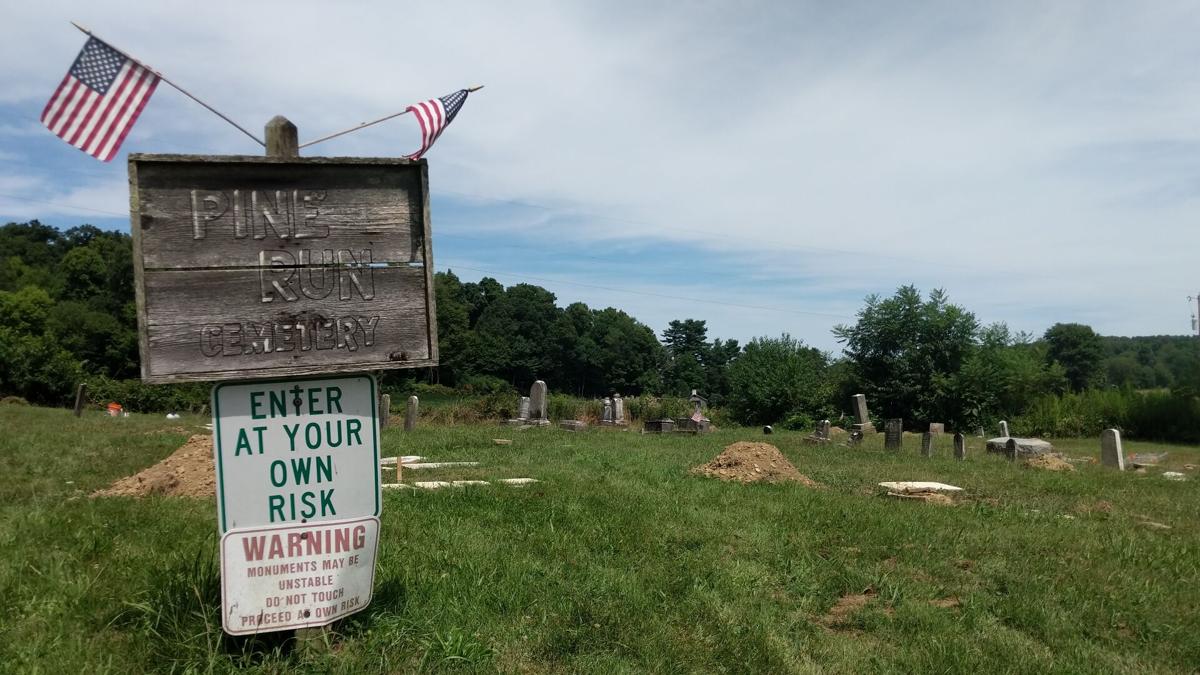 The Civil War-era cemetery doesn’t attract many visitors, but Ronny Echelberger has spent most of his summer in the grassy patch. A retired native of Lucas, Echelberger dedicates a significant amount of time to a rather unique hobby -- repairing and preserving inactive gravesites.

While the hobby might seem morbid to some, Echelberger thoroughly enjoys it. Especially on quiet days with pleasant weather. Working in an old cemetery is a way to honor the old soldiers and pioneers of the past while escaping the noise and turmoil of today.

When Echelberger started the Pine Run project at the beginning of the summer, he planned to focus solely on a large family marker. Soon, he found himself mapping out all 100 plots.

“My intent was to just focus on the Statler stone ... but I'm one of those guys that can't let things that need to be fixed not be fixed. So, you know, I started digging in and started expanding my sphere. And now the whole darn cemetery’s dug up.”

As Echelberger roams through Pine Run, he’ll point to different gravestones and share a tidbit about the person’s life. This gentleman served in the Union Army during the Civil War. That man was named after his father. This woman, buried just two months before the infant next to her, likely died in childbirth.

“When you spend so much time in the cemetery, you get kind of curious about who these people were. You get sucked into the stories,” he said. “There are people here who were born before we declared independence from Britain. The guy at the end was born in 1772 and fought in the war of 1812.”

Echelberger has been doing conservation work since 2017, but corresponding interests in history and genealogy took root much earlier.

“I probably got the bug from my mom,” he said. “She did family tree stuff back before the computer was invented, in the '70s. So in my teens, I was drug from here to Pennsylvania and West Virginia, through cemeteries, looking for relatives.”

Three years ago, Echelberger's mother asked if he recalled visiting a tiny, eight-plot cemetery nestled in the woods west of Butler, a third of a mile from the nearest road.

"She kind of told me how to get there. I had to stop at a couple people's houses because people who lived a quarter mile from it didn't even know it was there," Echelberger said.

Wedged between a cornfield and a couple of backyards, the tiny graveyard sat forgotten. Stones were toppled, stacked up and hidden by waist-high weeds. Local county commissioners, tasked by Ohio law to maintain inactive gravesites, weren't even aware of its existence.

"I spent three months restoring that cemetery, starting from raking the years of fallen trees, dead leaves and just trying to find what was there,” he said.

Not wanting to cause further damage to the already fragile monuments, Echelberger studied proper preservation techniques. He even traveled to Massachusetts to attend a cemetery conservation workshop hosted by the National Center for Preservation Technology and Training.

“I call myself a preservationist or a conservationist, not a restorationist. You can restore a stone so that it looks brand new, but in the process, you're probably going to damage it. So I just preserve what's left,” Echelberger explained.

Any cemetery project starts with a little research. Since stones in abandoned cemeteries are often broken, buried or displaced, he often consults old cemetery maps to determine the number and order of burial plots.

“My starting point is historical reference. I got a map of the plots, and I've got a list of names of people who are buried here. Based on the map, and based on the list of names, which are kind of written as they would have appeared, I can kind of guess where I'm missing a stone and where it might be,” he explained.

Next comes the excavation. Using plot maps and a little guesswork, Echelberger begins to look for buried headstones and footstones using a steel rod from an old filing cabinet.

“That is a very scientific tool,” he joked, slowly pushing the rod into the ground. If he hits stone multiple times in the same area, he’ll dig carefully until he uncovers a marker.

In old, abandoned cemeteries, it's not uncommon for stones to be buried three or four inches underground -- either whole or in multiple pieces

“As the ground settles, the back of the base stone may have started leaning, and then at some point, the weight just pulled it over,” Echelberger explained. “Or the stone broke and fell to the ground and laid flat. . .It doesn't take long for the grass to just overtake it.”

If the stone is broken in pieces, Echelberger tries to find as many as possible. At times, he’s found fragments of headstones scattered throughout a cemetery, since broken pieces were sometimes used to prop up other gravestones at risk of falling over.

Sometimes, headstones even make it outside the cemetery.

“It used to be a thing I guess, back in the '70s and '80s to steal stones. I guess kids didn't have any place to party except in cemeteries,” he said. “I don’t know what the deal was.”

Echelberger has been approached by local law enforcement, transportation officials and the Richland County Genealogical Society to help return stones that have been found across the county.

“I’ve got all these projects," he said.

After finding most or all of a stone, he washes each piece with water and a soft nylon brush, adheres them with a special two-part epoxy and coats it with a D/2 biological solution that kills mold and mildew. Echelberger claims it’s the same solution used for preserving stones at Arlington National Cemetery.

If there are pieces missing, he fills them in with a hydraulic lime mortar, treated to match the color of the stone as closely as possible -- but that’s always a last resort.

“I will make incredible efforts to actually try to find a piece of stone that's missing,” he said.

If the stone sat in a slotted base, he uses a setting compound to make sure it’s level, then a hoist to lower it in.

While Echelberger never attempts to carve into the original, if pieces of the headstone are missing, he’ll sometimes add information to the mortar he uses to fill in the gaps.

During his preservation projects, Echelberger often hones in on the stories of distant relatives, such as his great-great-great-great grandfather’s son, who died before he got the chance to follow through with his military service.

“He was in a 100-day unit during the Civil War. He was mustered out on the 10th of September 1864 and died three days later. My guess is probably of dysentery. He wasn't even present at the mustering he had already been released to go home,” Echelberger stated. “So I did a bit of research on the unit and found out that he wasn't the only one. There were about five or six people that were in the same situation.”

Echelberger recently completed work for the Village of Bellville, restoring the gravestones of founders Robert and Mary Bell.

“He did exceptional work for us,” Mayor Teri Brenkus said. “It doesn’t even look like the same headstones. He just cleaned everything up so nicely.”

Despite the hard work, long hours and special care that goes into the work, Echelberger doesn’t require payment for his services. Brenkus attempted to pay Echelberger for his work in Bellville, but he refused.

Occasionally people stop on the side of the road to thank him for what he’s doing, and that’s payment enough.

“In this cemetery alone, I've had at least six people stop and say, ‘Hey, look, I appreciate what you're doing. I hate seeing this thing and the condition that it's in,” he said.

One person wouldn’t leave until Echelberger accepted a modest contribution.

“When I go to talk to the trustees and give them a warning that I plan on doing some work in the cemeteries, I always start out with, ‘I'm not here to ask you for help and I'm not here to ask you for money,' ” he explained. “But I always coordinate with them because I don't want them to get some crazy call from a resident and going, ‘Hey, there's this kook in the cemetery, taking headstones in his pickup truck.’”