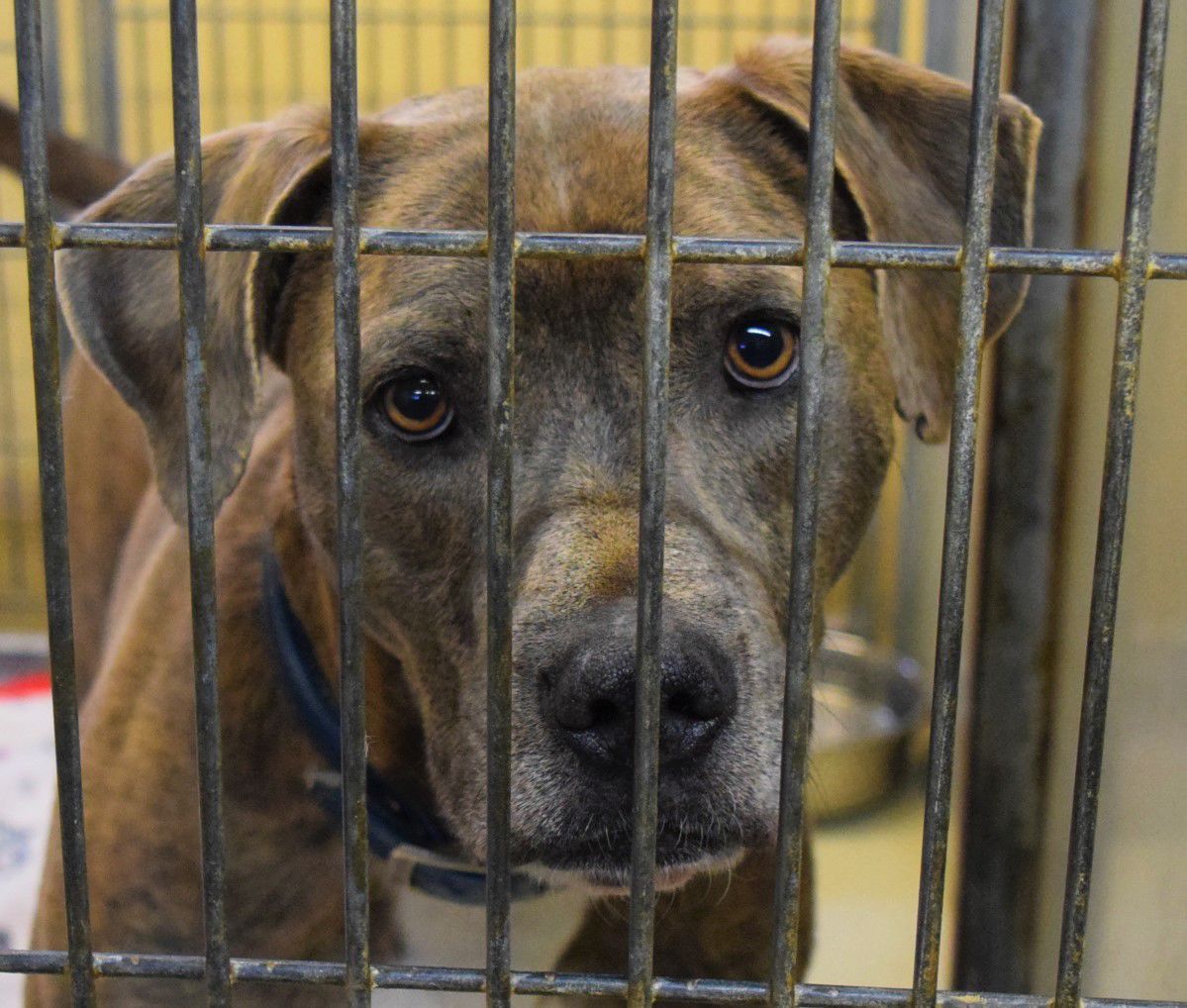 There were more than 50 dogs like this one at the Richland County Dog Shelter on Saturday, waiting for a permanent home. 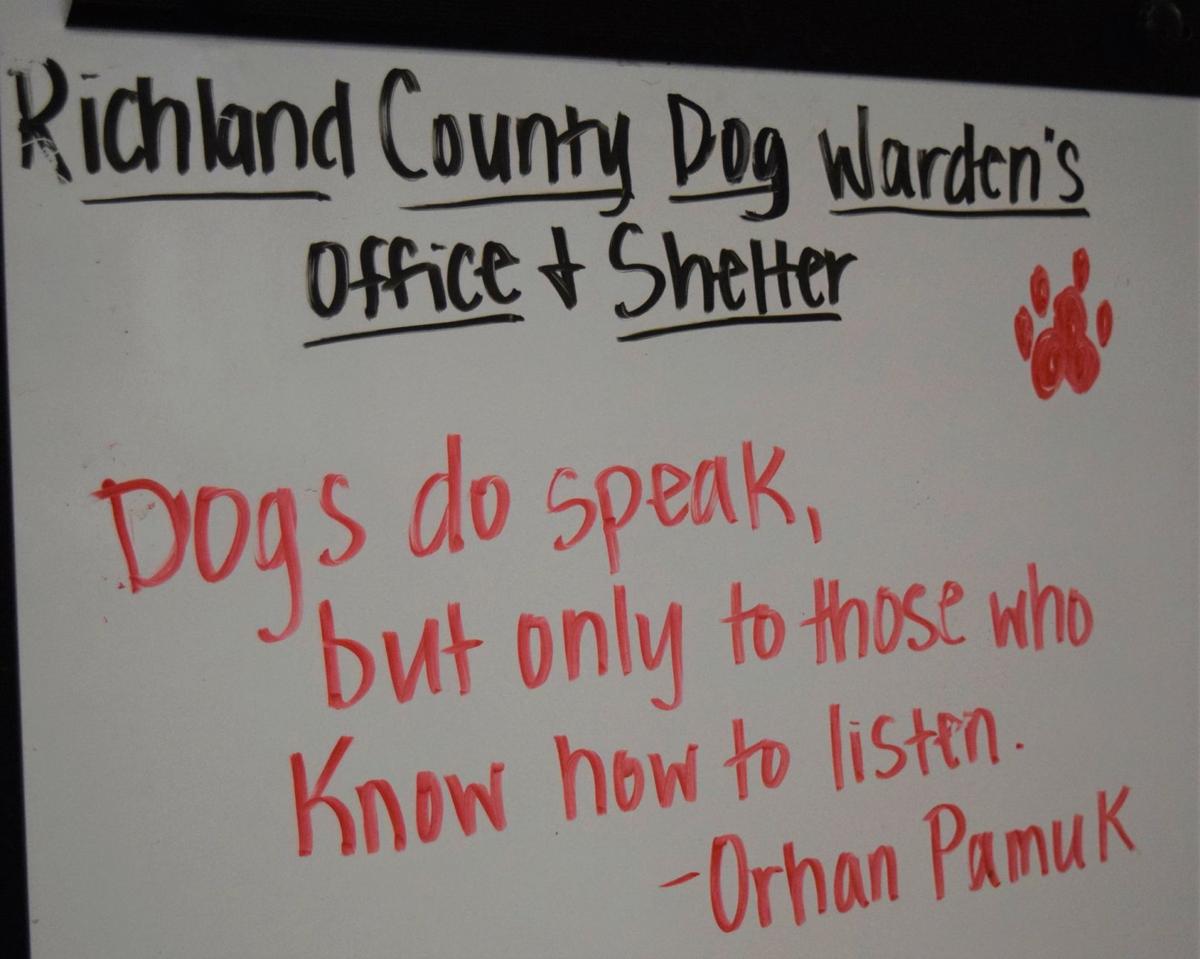 A sign in the lobby of the Richland County Dog Shelter. 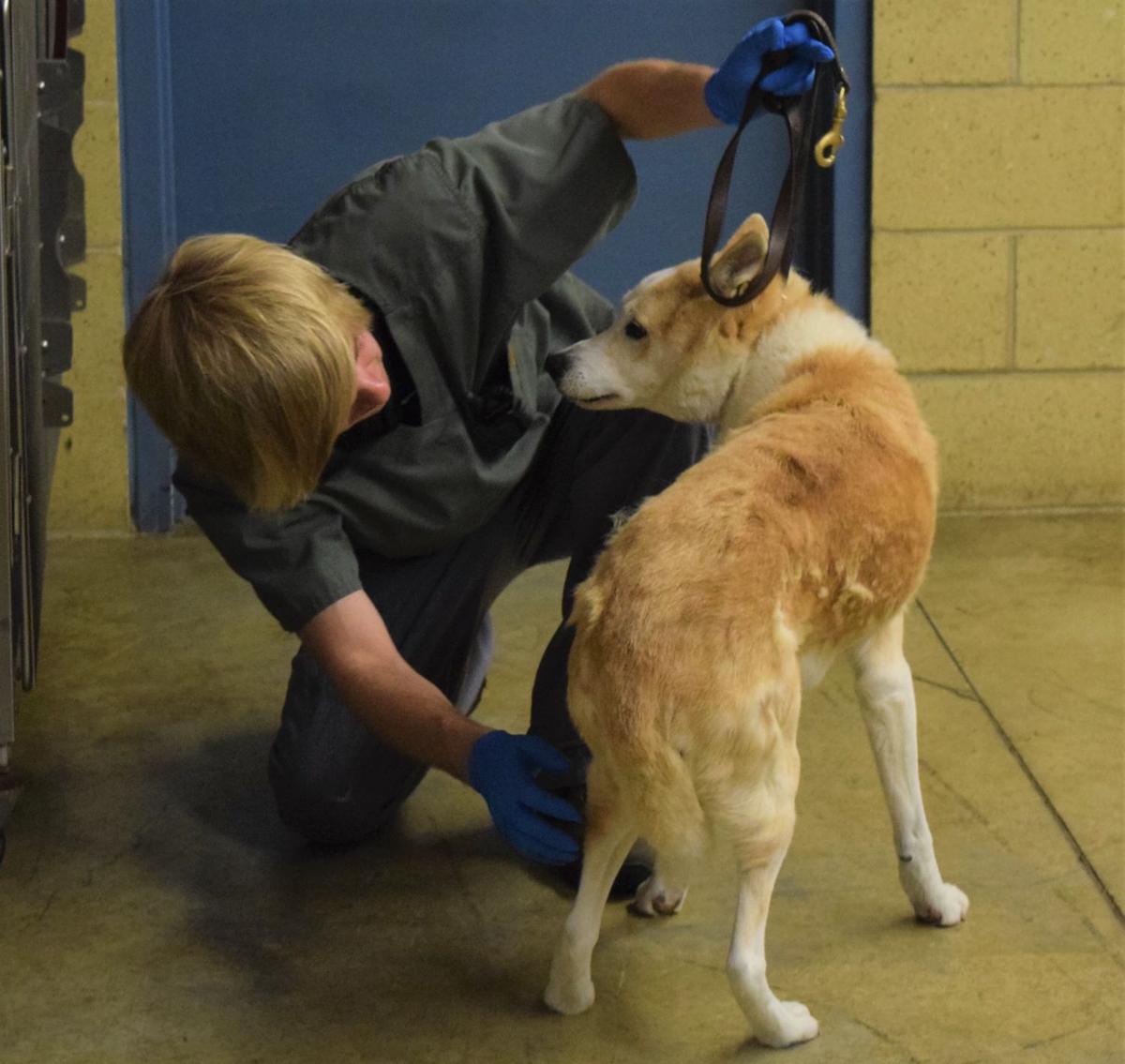 A staff member works with one of the dogs at the Richland County Dog Shelter earlier this month.

EDITOR'S NOTE: This story is in response to a reader-submitted question through Open Source, a platform where readers can submit questions to the staff. A reader asked if the Richland County Dog Shelter was a "no-kill" facility.

MANSFIELD -- Is the Richland County Dog Shelter a "no-kill" facility? The simple answer is yes, but the desires of some national animal rights organizations make the answer a bit more complicated.

Richland County Dog Warden Dane Howard said the local shelter is classified as a "no-kill" facility because less than 10 percent of the dogs who enter the shelter are euthanized by a local veterinarian -- almost always for untreatable medical reasons.

In 2019, Howard said, the shelter had to medically euthanize 16 dogs, a low number when compared to the several hundred who came through the door. The "no-kill" policy was adopted at the shelter seven years ago.

That doesn't mean animals at the shelter are never medically euthanized. Though there are no formal national or state regulations or benchmarks, a "no-kill shelter" is one that does not destroy healthy or treatable animals even when the shelter is full.

It also actively works through employees, volunteers and partners to find new homes for the dogs through adoption.

It means the facility reserves euthanasia for animals that are too badly injured to save, terminally ill animals, or those considered dangerous to public safety.

"I feel very strongly that we must do everything we can not to have to kill any dogs," said Howard, who took over as warden about a year ago.

The American Humane Society would agree with Howard on the strong desire not to destroy any dogs.

But the organization founded in 1877, along with other prominent animal rights' organizations around the country, don't agree with assigning labels.

According to its website, the AHS said terms such as “no-kill,” “open-door” (or “open-admission”), and “pound” are "pejorative and divisive and pit members of the animal welfare community against one another, instead of fostering an attitude of respect and collaboration around the common goal of saving animal lives."

The AHS said its position is in line with principles set forth in the “Asilomar Accords,”  developed in a 2005 meeting of animal welfare leaders from across the country. 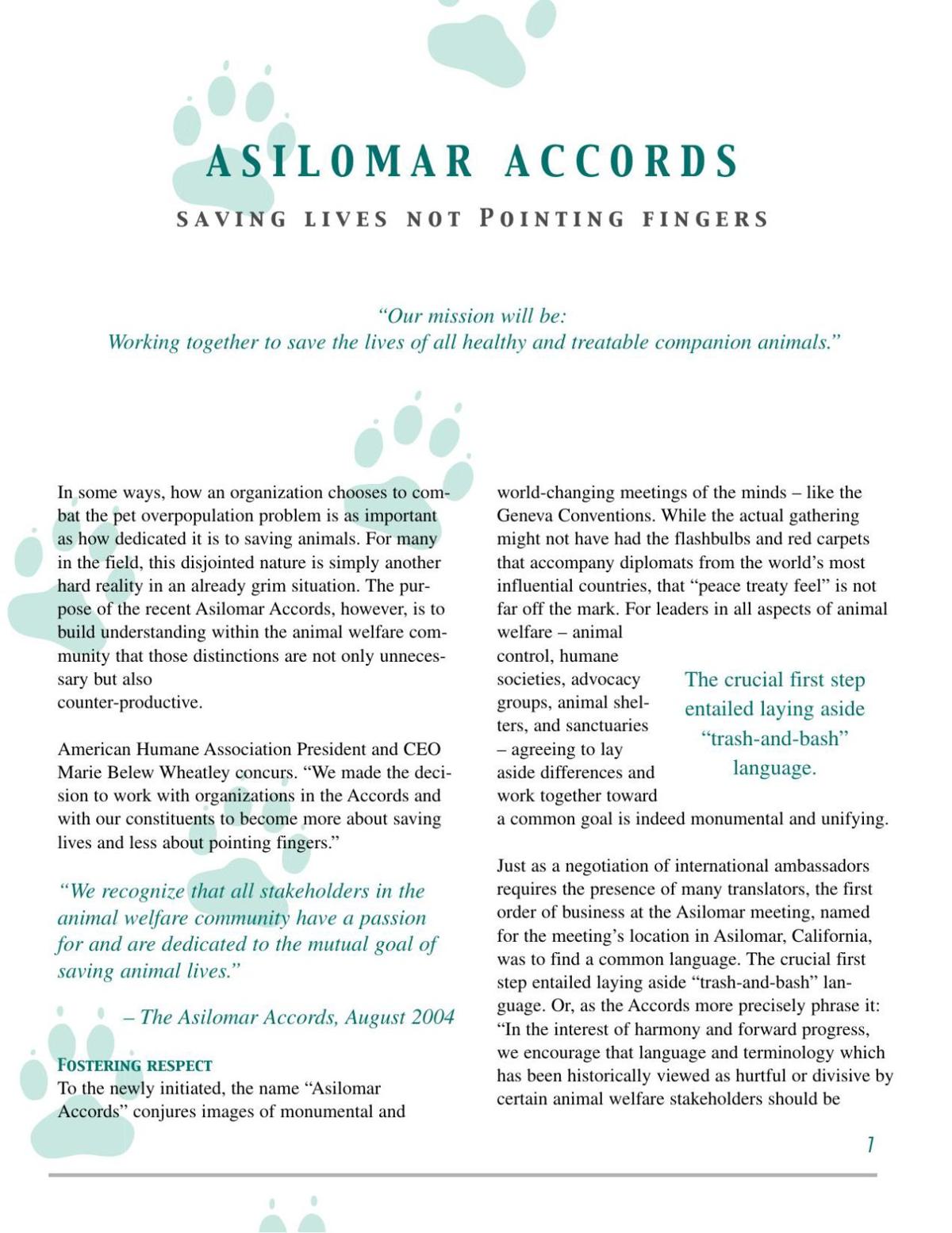 The Asilomar Accords recognizes all stakeholders in the animal welfare community are dedicated to the same goal, regardless of differing philosophies and approaches.

The accords "encourage a sense of unity in the field, while respecting the differences inherent to various organizations, communities, and geographic regions."

The accords maintain, "Local shelters probably won’t drastically change the way they look or function as a result of the accords. What will change is the amount and type of opportunities for collaborative solutions to each community’s animal welfare issues.

"Whether that means arranging to transfer sick animals from a shelter without a vet to one with veterinary resources, or creating a coalition of local animal control agencies, non-profit shelters, and community members concerned about feral cats, the Accords lay the groundwork for collaborative efforts and mutual support of those seeking to save the lives of all healthy and treatable companion animals."

The goals of the Richland County Dog Shelter are also in line with the accords.

-- In 2019, the shelter became a mandatory spay-and-neuter facility, which will help to reduce the local stray population. It contracts with a mobile van that performs the surgeries at the site before the dogs can be adopted.

-- The shelter has an active volunteer force that works with the animals and also participates in fundraising efforts to acquire needed items and supplies and helps to pay for veterinarian care. It actively recruits new volunteers. Anyone interested can call 419-774-5892 or stop by the shelter at 810 N. Home Road.

-- It has an active social media outlet on Facebook with thousands of followers. The site features tons of photos, videos and information about dogs that come into the shelter in need of adoption.

-- It conducts special public events aimed at increasing adoptions, including an "After Hours Adoption Event" coming up on Thursday at the shelter. The event will be from 4:30 to 7:30 p.m.

The Richland County Dog Shelter housed 50-plus dogs on Saturday, according to Howard, who said that number jumps into the 70s during the warmer summer months.

"We are well below the national standard (for euthanizing) dogs that come into our care," Howard said. "I am very proud of our staff and the many volunteers who do such a wonderful job of taking care of these dogs and helping find them find new, permanent homes."

Richland County Dog Shelter is officially a mandatory spay and neuter facility. The Richland County Board of Commissioners, other elected officials and shelter volunteers recognized the change with a press conference Tuesday, August 2, held directly before a mobile veterinary hospital arrived to perform its first procedures for the shelter.