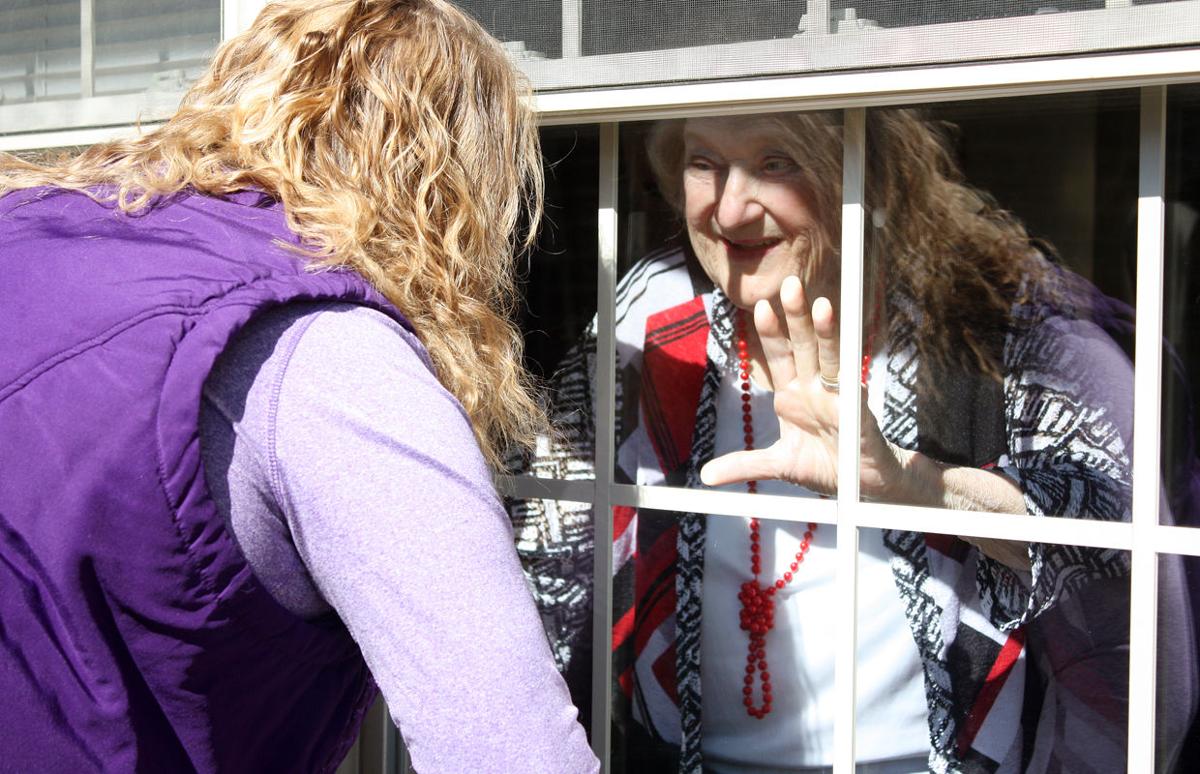 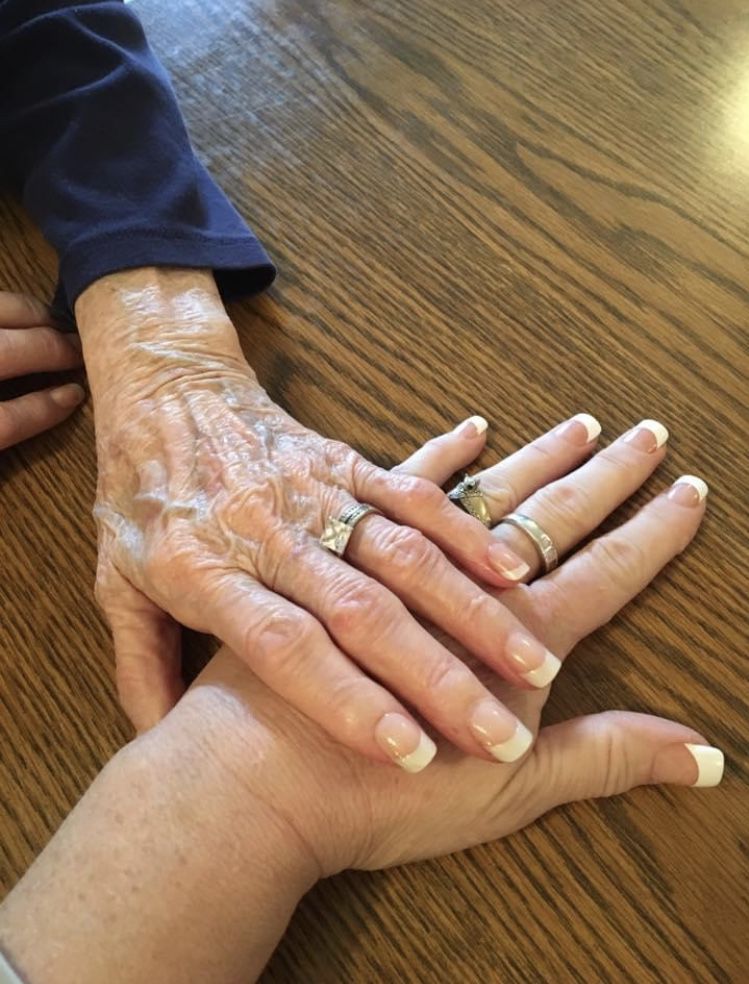 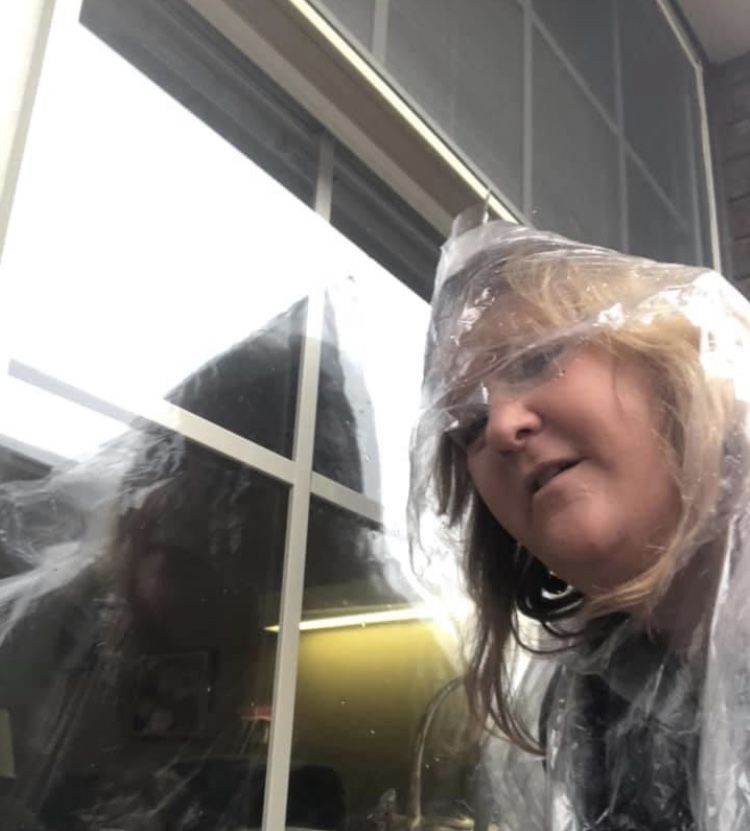 From Kelly's Facebook page: "Just in case y'all thought the rain was keeping me away!" 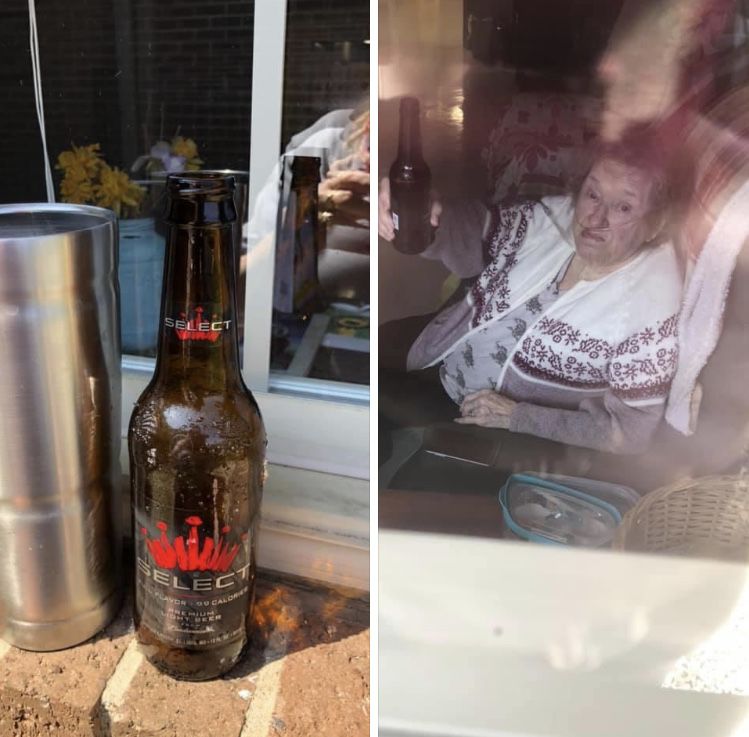 EDITOR'S NOTE: We asked readers to nominate heroes from the community during the coronavirus crisis using our Open Source platform.

LOUDONVILLE — Kelly Harvey knows the 14-mile drive from the village of Lucas to Colonial Manor Health Care Center in Loudonville by heart.

Before the sun comes up, Harvey travels through Mohican country, past her hometown of Perrysville, in every weather imaginable, to visit one very important resident at Colonial Manor: her mother, Gloria DeWitt.

It's a visit she's made every single day, usually twice a day, for the past four years.

"It is exhausting," Harvey said. "But I wouldn't have it any other way."

Harvey's dedication to her mother inspired one reader to nominate her as a "Daily Hero," a person who has made a positive impact on your life during the COVID-19 crisis.

"Kelly Harvey isn't my personal hero, but her mama's," said Dee Pierce in her nomination. "She has not missed a day visiting her mom at the nursing home since she went in. The virus didn't stop her. They even shared a drink together on Kelly's birthday through the window. She is an awesome daughter. No matter the weather she is there."

For Harvey, her visits aren't anything "heroic" - they're an act of unconditional love.

"I can't imagine not seeing her face, even though it's through a window," Harvey said.

Harvey saw that kind of fierce, unequivocal love modeled throughout her mother's life. Gloria DeWitt lost both of her parents six months apart by the age of 12, and thus became the head of her household. She met her husband at a roller-skating rink in Mansfield when she was 18, and the couple married and had five children together - four boys and Harvey, the only girl and the youngest.

"Let's just say nobody picked on me," Harvey said with a laugh.

In 1982, the DeWitt family purchased a restaurant and tavern, where Harvey worked throughout the years before her current job as a window clerk at the U.S. Post Office. For many years it was called JR's Tavern, until a fire in 2001 forced a renovation. The place reopened as Fluff and Ed’s, and was a popular Perrysville restaurant and tavern for decades.

"Fluff was my mom's nickname because of her beehive hairdo, and my father's name was Ed," Harvey explained.

Gloria DeWitt worked at the restaurant until she was 82 years old. Then, things took a turn.

After her husband passed away, Gloria had a series of health problems including a broken hip, a broken pubic bone, an esophagus bleed, and a broken femur all in the same year, at the age of 85.

"She was in and out of the nursing home until she broke the femur, then she wasn't allowed to get up and walk without assistance," Harvey said. "It was inevitable because she went through so much that we had to keep her in the nursing home."

Gloria became a full-time resident at Colonial Manor at the end of 2016, and Harvey hasn't missed a day visiting her since.

"Even when I'm there twice a day, she'll say she misses me or call me," Harvey said.

Harvey makes her first stop at Colonial Manor before her first shift at the Post Office begins at 4 a.m. then stops for a few minutes before her next shift starting around 11 a.m. She keeps a chair and blanket in the back of her purple Jeep for evening visits, where she'll sit and visit for at least an hour.

Harvey drops off gifts and snacks for Gloria every other day, including a plethora of Jello to snack on. For Harvey's birthday on April 4, the two women shared a beer through the window thanks to a prescription allowing Gloria to have a beer in her room.

"She likes her beer, and at almost 90 she can have whatever she wants," Harvey said. For those wondering, Gloria's drink of choice is Coors Light.

Harvey's visits with her mother were much cozier before the COVID-19 crisis. Beginning March 12, following recommendations from the Center for Disease Control and Prevention (CDC), Colonial Manor stopped allowing visitors inside the facility. As of May 5, the facility reported no cases of COVID-19.

The distance has been hard for Harvey and Gloria.

"She just wants to hug me and touch me, which she tells me a lot. It's so rough," Harvey said, her voice catching. "Even just to hold my hand...we'll sit there and watch TV and hold hands. The physical part is so frustrating.

"Plus it's worrying that something is going to happen and you can't be there," she continued. "The other night she called me at 3 a.m. to tell me she loved me because she was afraid. After that I couldn't go back to sleep.

"But she slept just fine after she told me that," she added with a laugh.

Luckily there have been moments of levity, too.

"It's very hard, but she's so spunky and she flips me off on a regular basis and tells me she's going to kick my butt, so it's a lot of joy, too," Harvey said. "It shows that she has that fight. She's always being so ornery and making life so enjoyable."

As of Wednesday afternoon, Harvey had no concrete plans yet for Mother's Day. Probably a group phone call with her brothers, maybe a cookout outside Gloria's window. Colonial Manor promised extra staff to sanitize, deliver presents and help with window visits.

Whatever her plan, Harvey's goal is to make the day special for her lifelong best friend. Married 28 years with two step-children herself, Harvey has gleaned plenty of wisdom from her mother.

"I thank the Lord on a daily basis several times a day that I still have her," Harvey said. "She lost her mother at such a young age, I can't imagine losing her even at 52 years old.

"She's had such a rough life, and a part of me will totally understand when the good Lord needs her because she's suffered enough. But she'll say she's not ready to go because she doesn't want to leave me. She shows me how tough she is and it makes me so proud."

Report: Our findings from the 2020 Reader Survey

Back in February -- you know, a million years ago -- we conducted t…