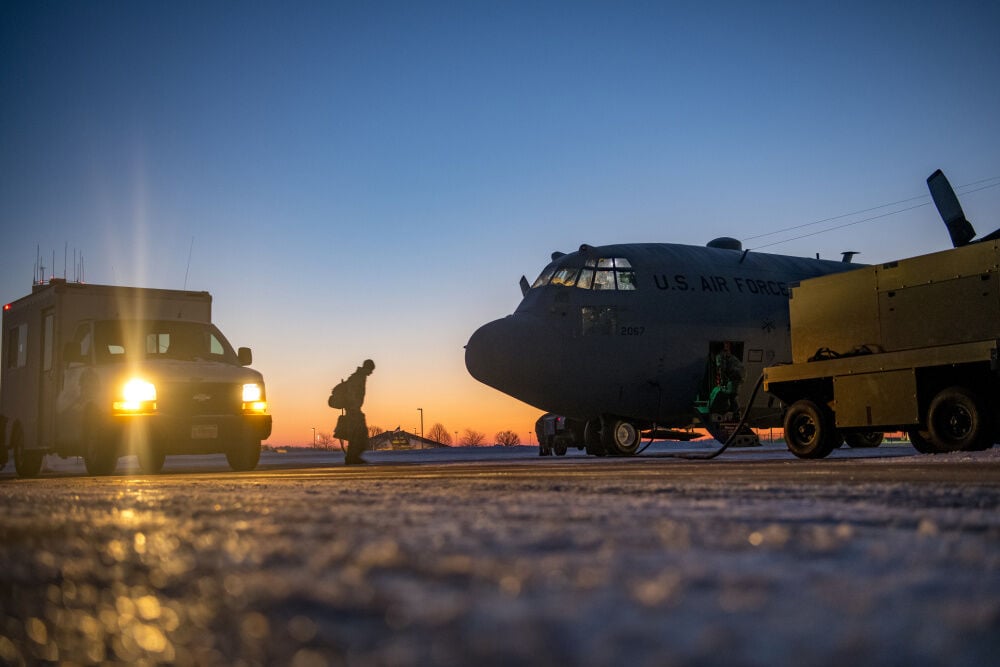 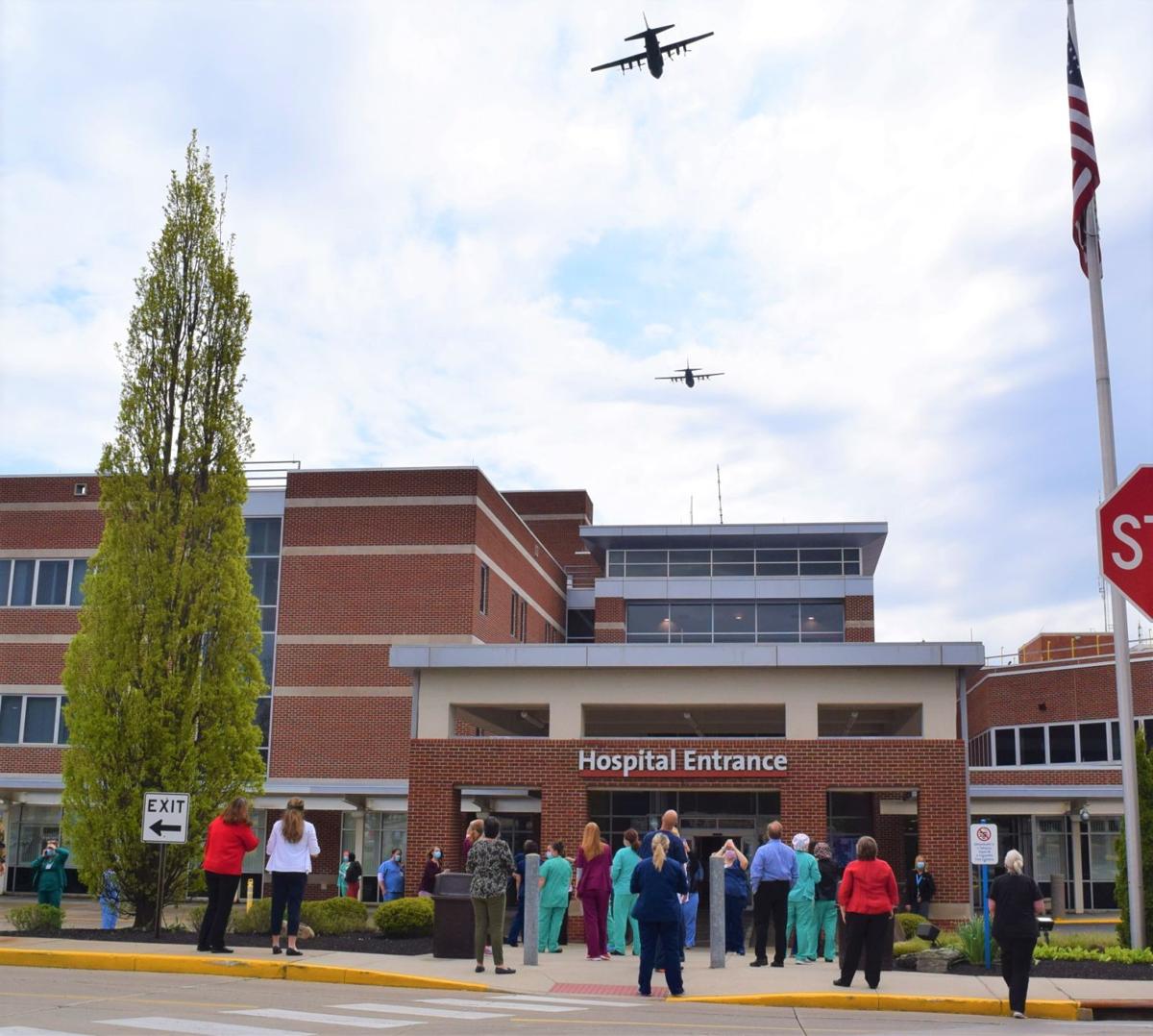 OhioHealth Mansfield Hospital staff members watch as two C-130 aircraft from the 179th Airlift Wing fly over the facility in May 2020 during a 2020 salute to COVID-19 medical responders. (Richland Source file photo) 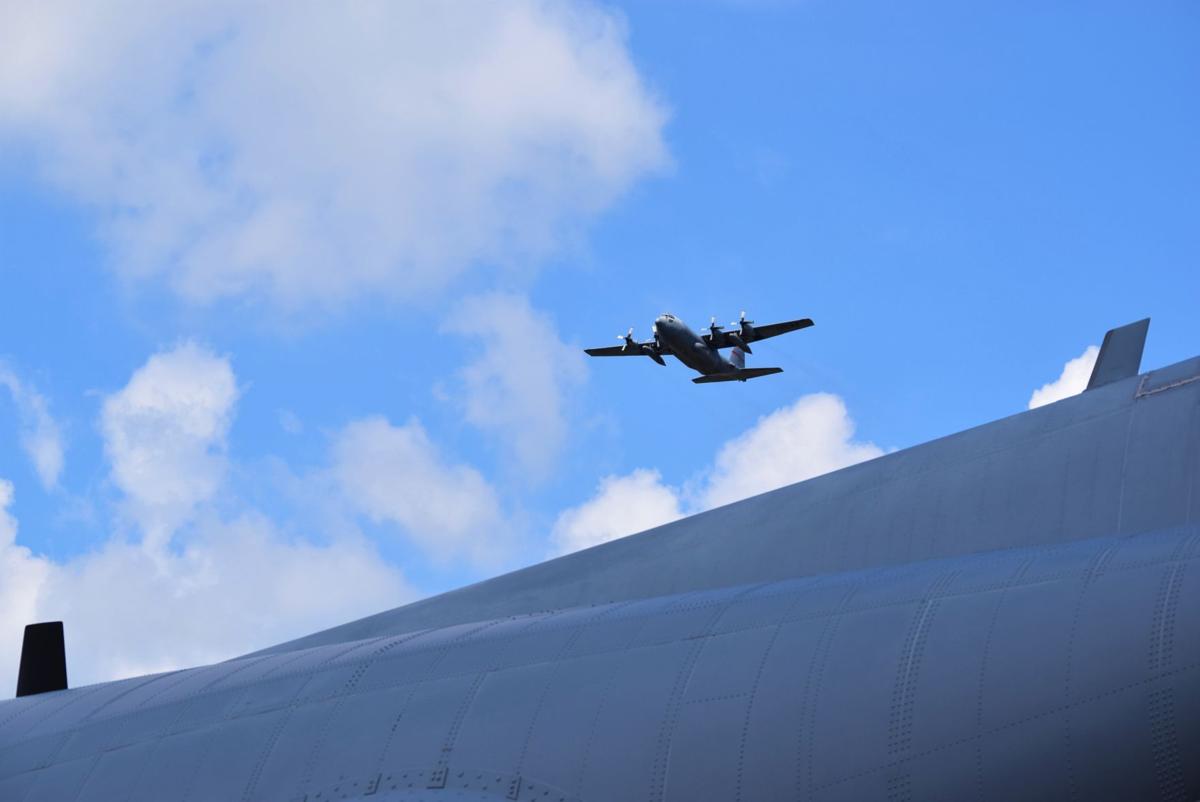 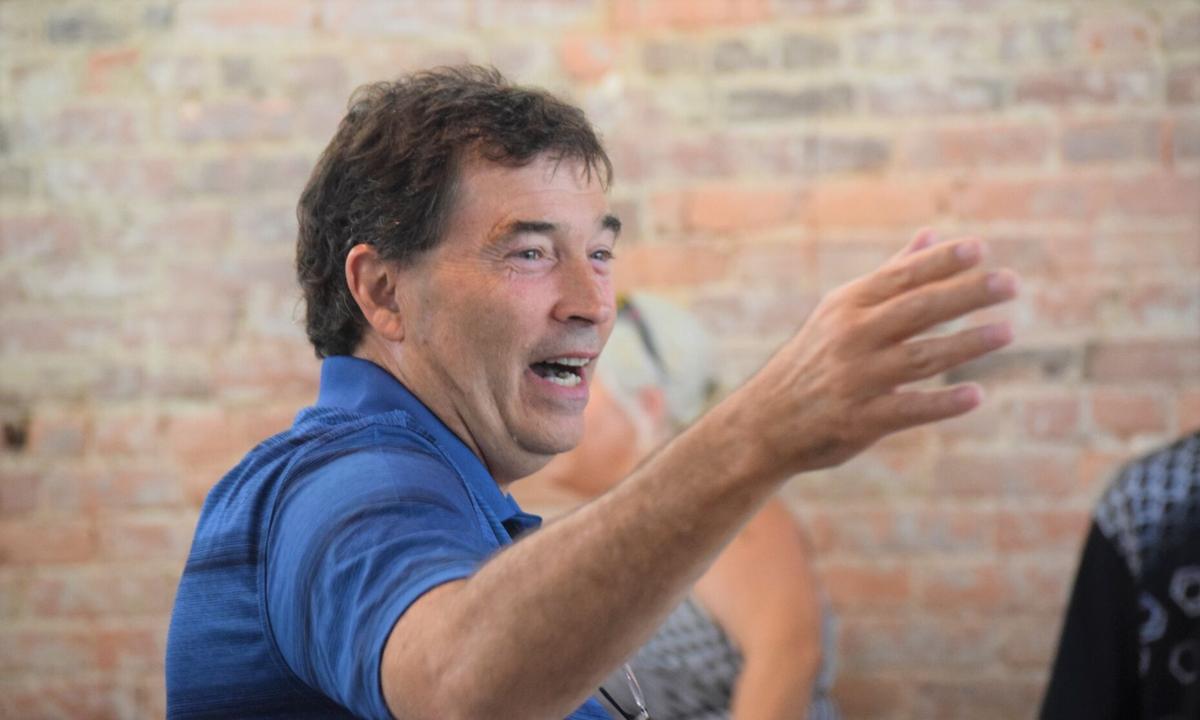 U.S. Rep. Troy Balderson, during a visit to Mansfield on Thursday, said he was "very optimistic" the city will be chosen as the location for a new Information Warfare (Cyber) Wing.

MANSFIELD — It's clear the Air Force wants to end the seven-decade flying mission of the 179th Airlift Wing, based upon the 2022 budget request it proposed to Congress at the end of June.

But despite the potential loss of the eight, aging C-130H transport aircraft, officials remain bullish on the future of a military unit at Mansfield Lahm Regional Airport, likely in the form of a new Information Warfare (Cyber) Wing.

U.S. Rep. Troy Balderson, whose 12th District includes most of Richland County, said Thursday he was "very optimistic" the Air Force will select Mansfield as the home for the new unit.

In November, the U.S. Department of Defense notified Gov. Mike DeWine the Air Force had selected Mansfield as one of two national finalists to host the IWW, along with the 133rd Airlift Wing based at Minneapolis-St. Paul International Airport in Minnesota.

The 179th Airlift Wing has has roots dating back 72 years in Mansfield, organized in 1948 as the 164th Fighter Squadron.

The future of several Air Guard units still using the older "H" model aircraft has been in question since the Air Force announced it wanted to reduce its C-130 fleet from more than 300 down to about 255. The active-duty Air Force uses only newer "J" model aircraft.

Congress has the final say in the Air Force plans, though momentum toward the reduction seems to be gaining steam.

In January, retired Brig. Gen. Rich Green, the former commander of the 179th who later served in the Ohio Adjutant General's office in Columbus and then as the legislative director for the National Guard Association of the United States in Washington, D.C., sounded the alarm about the local flying mission.

"The writing is kind of on the wall," he said. "We are fighting an uphill battle."

Part of the Air Force plan is to supply some National Guard units with the newer C-130J model aircraft, but the 179th is not on that list.

Even without new C-130J models, Green said the 179th's current C-130H models are still in great shape, maintained by crews with more experience than found in the active duty Air Force.

The Air Force has relied upon some version of the aircraft since 1956.

Originally designed as a troop, medevac, and cargo transport aircraft, the C-130 airframe has found uses in a variety of other roles, including as a gunship (AC-130), for airborne assault, search and rescue, scientific research support, weather reconnaissance, aerial refueling, maritime patrol, and aerial firefighting.

"These C-130Hs at Mansfield are good to go for a long time," Green said, adding the local aircraft have already undergone many updates and modifications. "They can be used for a long time to come."

According to a publication produced in May by the National Guard Association of the United States, governors in 12 of the 17 states with Air Guard C-130 wings signed onto a letter "imploring Congress to protect the states from potential cuts to their airlift fleets."

DeWine was not among the governors joining in the letter.

Balderson, who said in January he was pressing to keep the flying mission, said his primary focus now is on landing the IWW.

Balderson said he and local officials have been communicating with the Air Force and Maj. Gen. John C. Harris Jr., Ohio adjutant general and commander of the Ohio National Guard.

Though no final decision has been made for the flying mission, the conversation has shifted in recent weeks to converting Mansfield into the new cyber unit.

"What better time to talk about cyber security than now, as (the United States) has been hit with (cyber attacks) four times in the last two months?" Balderson asked.

'We see a path (forward) there. There was some competition (with Minneapolis), but that competition has somewhat declined. I won't say it's all gone, but I am very optimistic," Balderson said.

According to the Air Force, an IWW's mission is to "deliver information warfare capabilities in or through the information environment to deliberately affect adversary human and system behavior and preserve friendly freedom of action during cooperation, competition and conflict."

The Air Force has said it would make a decision on the IWW location by September, though Balderson said that's up in the air.

"It's Congress and it's the government and that can change, too, as we all know. That's the goal right now," he said.

If Mansfield is selected, it would begin divesting its C-130s and begin the mission transition by September 2022 and become fully operational in 2027.

Balderson said he has begun speaking with educators around the area about the needs of future Guard members who may staff an IWW. "I think that is really important," he said.

However, in an emailed statement, U.S. Sen. Sherrod Brown, a Mansfield native, said Thursday he continues to speak with Air Force leaders about the C-130s important role in airlift capability to meet national security missions.

"I will continue to work with my colleagues to push for robust funding to recapitalize these aircraft," Brown said.

"Our delegation is working to support a mission at Mansfield and we expect a decision on whether the base will get the Information Warfare Wing (IWW) later this year. The 179th has a storied history at Mansfield, and we’ll do everything we can to continue the base’s tradition of serving Ohio and the country," Brown wrote.

Brown said he met in June with Frank Kendall, President Biden’s nominee for Secretary of Air Force, and discussed the important role of C-130s play The senator said he invited Kendall to Ohio to visit with local airmen. It's not known when, or if, such a visit would occur.

Ohio's rich military flying tradition is actually working against the 179th in this instance.

Green has said National Guard policy is to maintain at least one flying unit in each state.The fact Ohio has four can make the state a target for the Air Force, he said.

The Buckeye State is also home to the 121st Air Refueling Wing's KC-135 Stratotanker at Rickenbacker Air National Guard Base in Columbus, 180th F-16 Fighter Wing near Toledo, and the 178th Wing in Springfield, which transitioned from fighter aircraft to MQ-1B Predator Unmanned Drones.

"Unfortunately, the ability of the State of Ohio to support several flying wings is both a blessing and a curse," Green said.

Senior national leaders of the Air Guard, according to the NGAUS publication, have criticized Air Force plans to reduce the C-130 fleet.

"One of the questions we always ask, no matter what the asset, 'Is there another asset in the state that can fulfill the mission?" asked Maj. Gen. Francis Evon, adjutant general of Connecticut. "For the C-130, the answer really is no."

MANSFIELD --What does the 179th Airlift Wing of the Ohio Air National Guard mean to north central Ohio?