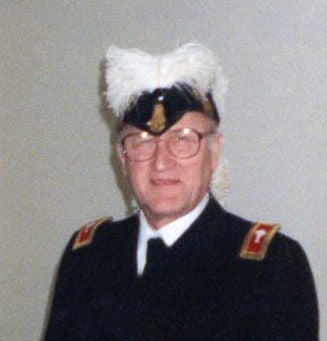 Eugene "Gene" H. Luedy, age 95, of Mansfield, passed away Thursday, December 5, 2019, at Winchester Terrace Nursing Home. He was a former resident of Mansfield Place Assisted Living where he made many friends over the past 5 years. He was born September 20, 1924, to John H. and Ella E. (Winkler) Luedy on the Luedy family farm near Lexington, Ohio.

He was a 1942 graduate of Lexington High School. After graduation, Gene served three years in the U.S. Army, stationed in the San Francisco area during WWII. He was an active member of the Masons since 1949, belonging to Mansfield Lodge #35, F. & A.M., Mansfield Chapter #28, Mansfield Council #94, and Mansfield Knights Templar #21. Gene was a past Commander of the Knights Templar #21. His main hobby for over 38 years was professional bowling-and he was known for throwing several perfect 300 games.

He was an active member of First English Lutheran Church, since 1949, where along with many committees, he served as a 7th grade Sunday school teacher and was a member of the church council and choir for many years. Gene, along with his dear friend, Marilyn Motson, served communion for over 22 years at area nursing homes. He retired after 39 years of service as co-owner and owner of Al's Kicks Men's Shoes on Main Street in downtown Mansfield, Ohio. He was an active member of the community through his membership in the Downtown Business Association and Christian Businessmen's Group of Mansfield.

Gene was a gentle soul who was kind and loving to all. He was a devoted husband and father. Gene's generosity was unmatched and his legacy will live on in the lives of those who knew him.

The family will receive friends from 6:00-8:00 p.m. Monday, December 9, 2019, at the Ontario Home of Wappner Funeral Directors, 100 S. Lexington-Springmill Road. A Knights Templar service will be recited at 8:00 p.m. The funeral service conducted by Rev. Bruce Haapalainen will be held in the funeral home on Tuesday at 10:00 a.m. He will be laid to rest in Mansfield Memorial Park with military honors presented by the 555th Honor Detachment.

To plant a tree in memory of Eugene Luedy as a living tribute, please visit Tribute Store.

Helen L. Smith 92 of Mansfield, went home to be with the Lord and h…

Eddie B. “Duke” Tufts, 72, passed this life on Wednesday, February …

Roger Blackstone was a gifted story teller. With a nod to the ancie…

Imogene Rose of Mansfield passed away Monday, February 17, 2020, at…

Tara Nicole Sauer, 37, of Mansfield, passed away unexpectedly on Fr…