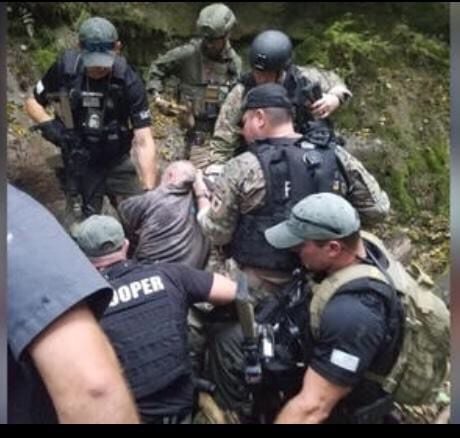 Law enforcement arrest Shawn Christy (in the middle) in 2018 after a five-day search in Richland County. 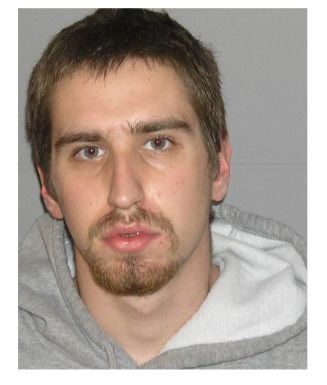 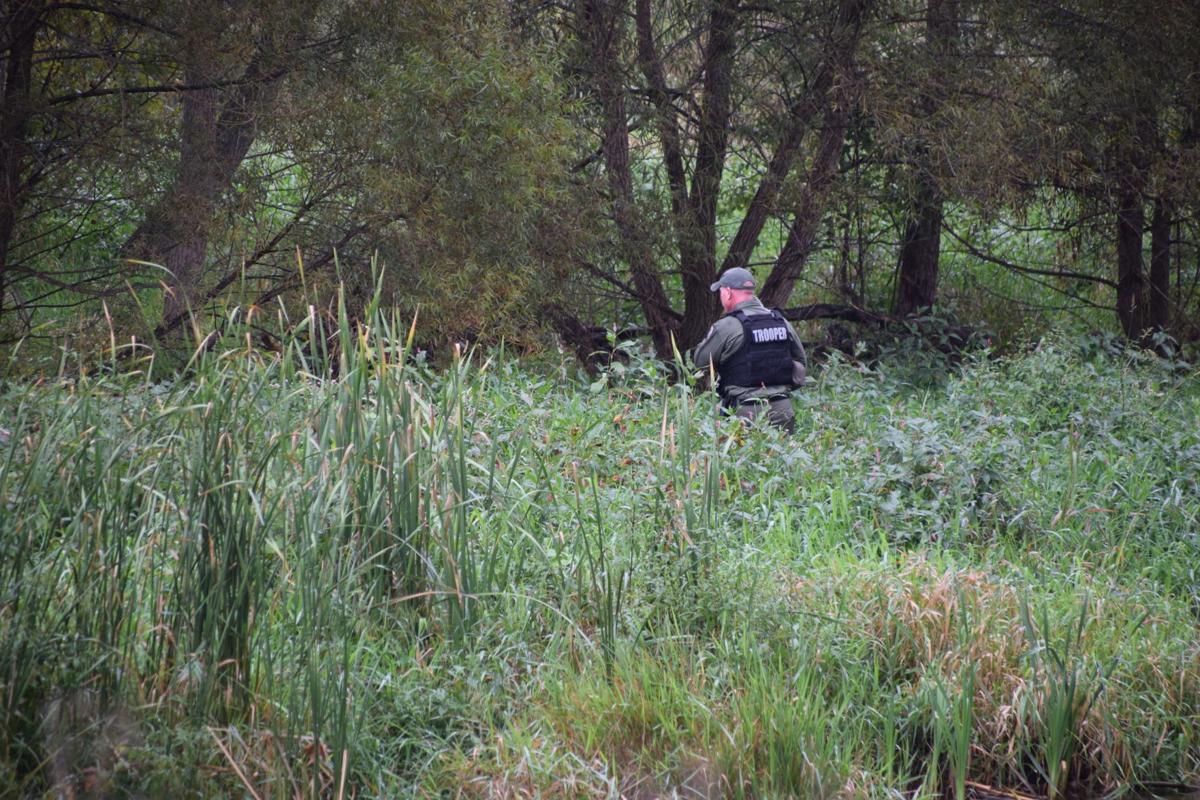 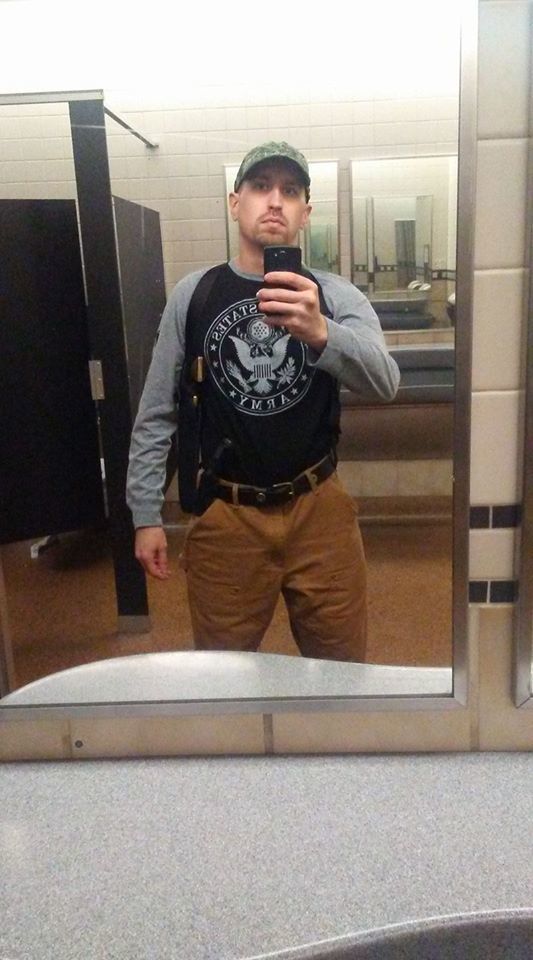 This photo was published in January on Shawn Christy's Facebook page. The caption reads, "This is why you don't push people, because some people will become citizen vigilantes..." 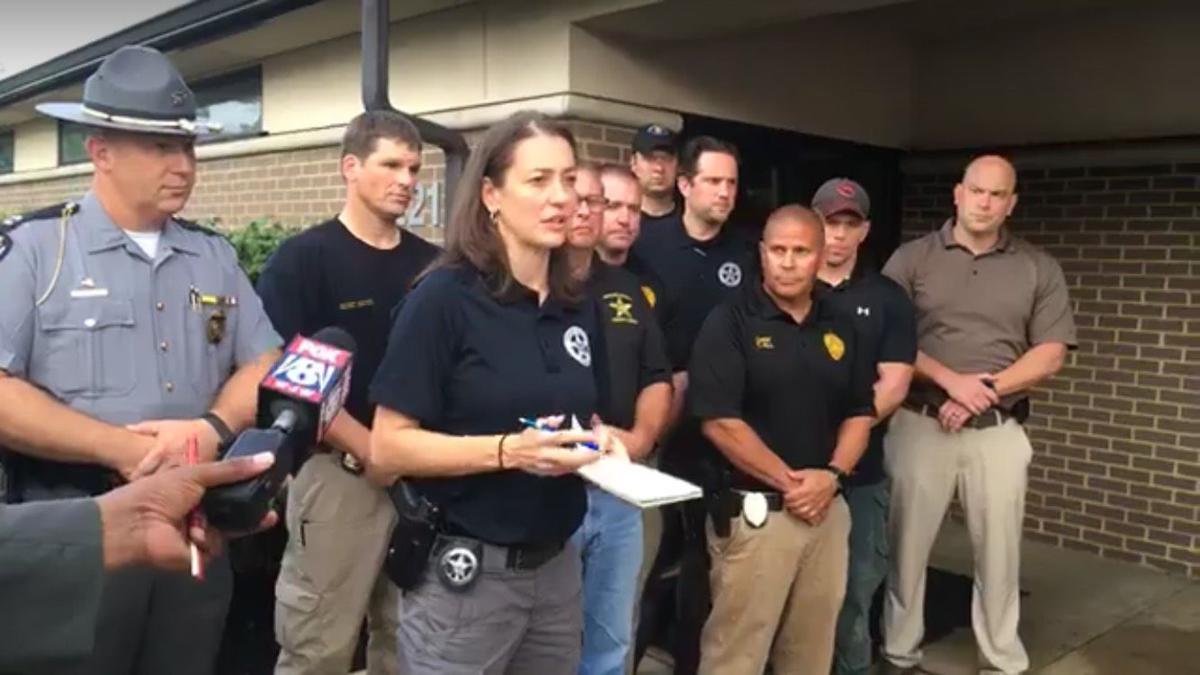 The U.S. Marshals conducted a press conference with other law enforcement agencies on Friday in Mansfield after the capture of federal fugitive Shawn Christy, one of the FBI's Most Wanted.

MANSFIELD -- This past weekend marks the 1-year anniversary of Shawn Christy's capture in Richland County.

The national fugitive was apprehended on a rainy Friday afternoon after a collaborative search by the US Marshals, state and local law enforcement. The then 26-year-old Pennsylvania man was found hiding in a Madison Township ravine, after an intense five-day manhunt across Richland County, and a three-month chase across the northeastern part of the United States and Canada.

Authorities said Christy stole a pickup truck in the early morning hours of Sunday, Sept. 16 from Skitco Iron Works in Hazelton Township, Pennsylvania and crashed the vehicle around 4:30 p.m. Sunday near the I-71 and Ohio 13 interchange. Christy then abandoned the vehicle and fled on foot.

“I don’t know that we knew right away,” said Major Joe Masi of the Richland County Sherriff’s Office. “But we learned that the vehicle was stolen. And then, at some point from there, we learned this was Shawn Christy, and he was a wanted person.”

Masi was at home when alerted to the news, and quickly responded to the I-71 scene, where law enforcement attempted to contain and capture Christy before sunset and into the night.

Enforcement Supervisor Deputy US Marshall Anne Murphy remembers how the elusive fugitive had been dropping on and off the agency’s radar. It was challenging -- as are many cases like this -- where she says it's often “something small” that allows law enforcement to make the necessary connections.

“That was initially how it all got started. It was an abandoned vehicle call,” Murphy said. “That’s why we tell people, if they have something small, it could be worth telling the police. That’s how it was with this abandoned truck.”

At that time, Christy was wanted on a federal warrant, issued in June, relating to social media threats against a Northampton County (Pennsylvania) prosecutor. He had posted on Facebook: “Keep it up (John) Morganelli, I promise I’ll put a bullet in your head as soon as I put one in the head of President Donald J. Trump.”

Christy also threatened to use “full lethal force on any law enforcement officer” that attempted to detain him.

The warrant for those incidents was in addition to multiple state arrest warrants in Pennsylvania for burglary, probation violation, and failure to appear for an aggravated assault case.

On Tuesday, Sept. 18, a SWAT team combed through tall grass and thick woods along Ohio 13, searching for Christy, who considered himself an “outlaw bushcrafter.” He previously posted videos to his YouTube channel where he described his “expertise” different environments, including deserts, mountains or urban areas.

Meanwhile, similar scenes played out across Richland County, as law enforcement followed dozens of tips and responded to fearful residents. By that Tuesday night, all the scenes ended the same way: without Christy in custody.

Federal fugitive "strongly believed" to still be in Richland County

Christy continued to evade law enforcement into Wednesday and Thursday.

“The search teams were exhausted. They were working 12-hour days, with 12 hours off and then coming back in,” said Captain Doug Noblet of the Mansfield Police Department.

He and Lt. Jason Bammann were switching off, sharing the responsibility for MPD’s participation in the search.

“We had a lot of leads, so it was easy to start questioning, are we ever going to find him?” Noblet said. “But we tried to stay positive. In this type of situation, you want to stay positive.”

This thought flashed through Major Masi’s mind, too. After two or three days, how could it not?

“But no one ever said, ‘He’s not here.’ We were never 100 percent sure, but the US Marshals, they were very very convinced he was still in the area, and we knew we needed to keep doing what we were doing. Everyone was committed to the operation,” Masi said.

The community support fueled their efforts. Local organizations and businesses often dropped off food at the command post, located not too far from the site of Christy’s crash at the Mansfield post of the Ohio State Highway Patrol.

“It was remarkable. It kept us going,” Murphy said. “It really does make a difference when you have the support of your community.”

Shawn’s father, Craig Christy, spoke with Richland Source Tuesday, Sept. 18, saying the “best-case scenario” was for his son to turn himself into someplace like the Mansfield City Police Department.

“Shawn, mom and I love you more than you’ll ever know. Nothing is too big that we can’t get through together,” he said when asked what he wanted to communicate to his son. “It’s time to surrender. You’ve proved your point. It’s time to work this out.”

He was fearful for his son’s life, saying he wanted “somewhere that it’s safe” for his son.

On Friday -- the day Christy was captured -- his father encouraged his son to turn himself into Dog (Duane) Chapman the Bounty Hunter via Facebook. The reality television star had an upcoming trip to Mansfield for a speaking engagement at the Renaissance Theatre.

A Pennsylvania father is encouraging his son, Shawn Christy to surrender to local law enforcement in Richland County.

"Shawn Christy, need you to call 570-225-8675. Need you to turn yourself in to Dog Chapman Bounty Hunter. Lawyers and Bailbondsman will be provided," the post said.

Later that day, Craig Christy posted to social media again. This time with screenshots of messages from Shawn.

"Shawn, this is Dad, in the event you encounter law enforcement, please listen to commands they give you," Craig Christy said. "The FBI, Secret Service and the rest of law enforcement wants a safe ending ... Pack it in son, you proved your point. Mom and I and thousands in our group Shawn Christy Political Prisoner love and support you."

In the messages, he encouraged his son to call so that he could get him in touch with Chapman.

"I'll be in touch," Shawn Christy said, according to the screenshots.

Dog the Bounty Hunter talks recovery at the Ren

Friday morning, MPD Captain Noblet felt hopeful. He believed the end was near.

“When I came in, I was informed we had very good leads and that notion fed throughout the search party. They realized they were getting close,” Noblet said.

Christy was captured at 4:38 p.m. Friday, Sept. 21 near the area of Interstate 71 and U.S. Route 30 in Madison Township. A canine picked up his scent and led officials from the U.S. Marshals and numerous other law enforcement agencies to Christy, who was “actively hiding.”

He was found in a ravine and arrested without incident. Christy had a firearm and large knife in his possession, authorities reported.

“To be able to succeed in something you’ve been working at for five days, and with everyone being safe and him being in custody with no issues, that was the goal of the whole operation,” Masi said.

“Nothing but high marks for the teams that located him. They are always aware of what’s going on, and you could see they were excited for the end, but they remained professional … They did exactly what they were supposed to do on that day,” he said.

Christy was deemed "healthy" after a review by medics and taken to the Richland County Jail.

"He's no longer on the streets. He's no longer a threat to the Mansfield community," Murphy said Friday, Sept. 21 in a press conference. "Everybody can go back to living the lives they were Sunday morning."

Law enforcement reflects on the experience

Murphy cited collaboration as the number one reason Christy was caught.

“The thing that stands out in my mind is that local, state and national law enforcement all responded. Everybody in the area was ready to go and got to work,” she said. “And they all kept working. They followed every lead -- every piece of information that came across their desk, they followed up on.

“We were able to survive that, and we overcome that part,” Noblet said.

He sees a greater positive impact that’s come out of that week.

“Unfortunately, a lot of times, the effort we saw during the week is not always seen throughout the nation. On my end, it was nice to see we could work together to accomplish the mission,” Noblet said.

Masi called the search the “best experience” he’s ever had collaborating with other agencies. Today, he’s still impressed by the successful effort.

“It proved we can all work together … I feel if some unfortunate situation would happen tomorrow, I don’t hesitate to know we’d all come together to resolve the situation,” Masi said.

U.S. Marshals on Shawn Christy: "He's no longer a threat to the Mansfield community"

Where is Christy today?

Today, Christy is being held at the Schuylkill County Prison. He faces charges in federal court and in Schuylkill, Luzerne and Carbon Counties.

His most recent court appearance was Friday, Sept. 13 in Luzerne County, Pennsylvania, where Judge John Domalakes set his bail at $50,000 before ordering the now 27-year-old man to be taken from the courtroom for cursing.

Citizens Voice reported six officers were needed to haul him from the courtroom.

This isn't Christy’s first time making disruptive outbursts in court. Yet he was given permission from U.S. District Judge Robert D. Mariani to represent himself at his federal case concerning the threats he made against Trump and others on social media, The Morning Call reported.

Christy will have judge-appointed attorney, David Cherundolo as standby counsel at his trial, which is set to start next month.

Shawn Christy, the national fugitive apprehended in Richland County in September 2018 after a three-month chase, has reportedly been convicted on 12 federal charges.