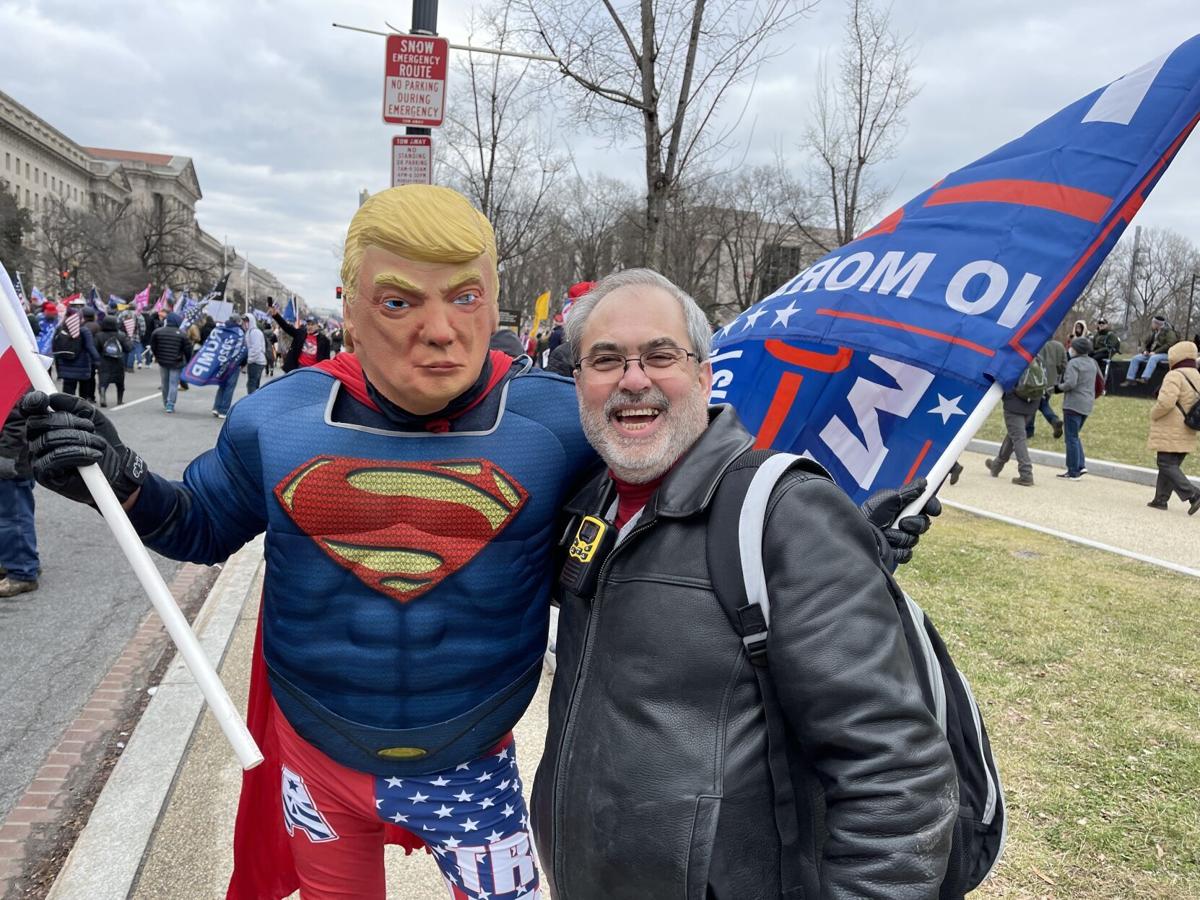 Joe Keim of Ashland poses for a photo with a man wearing a Trump mask on Jan. 6 while in Washington D.C. 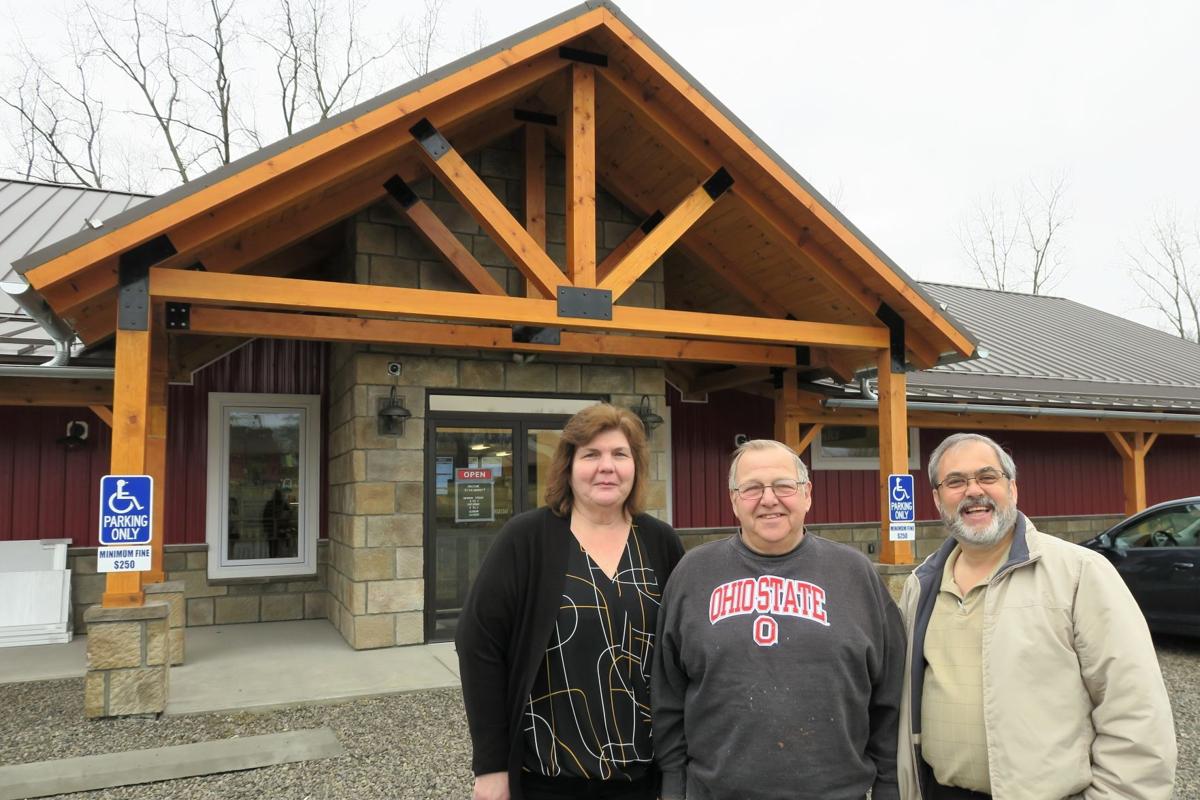 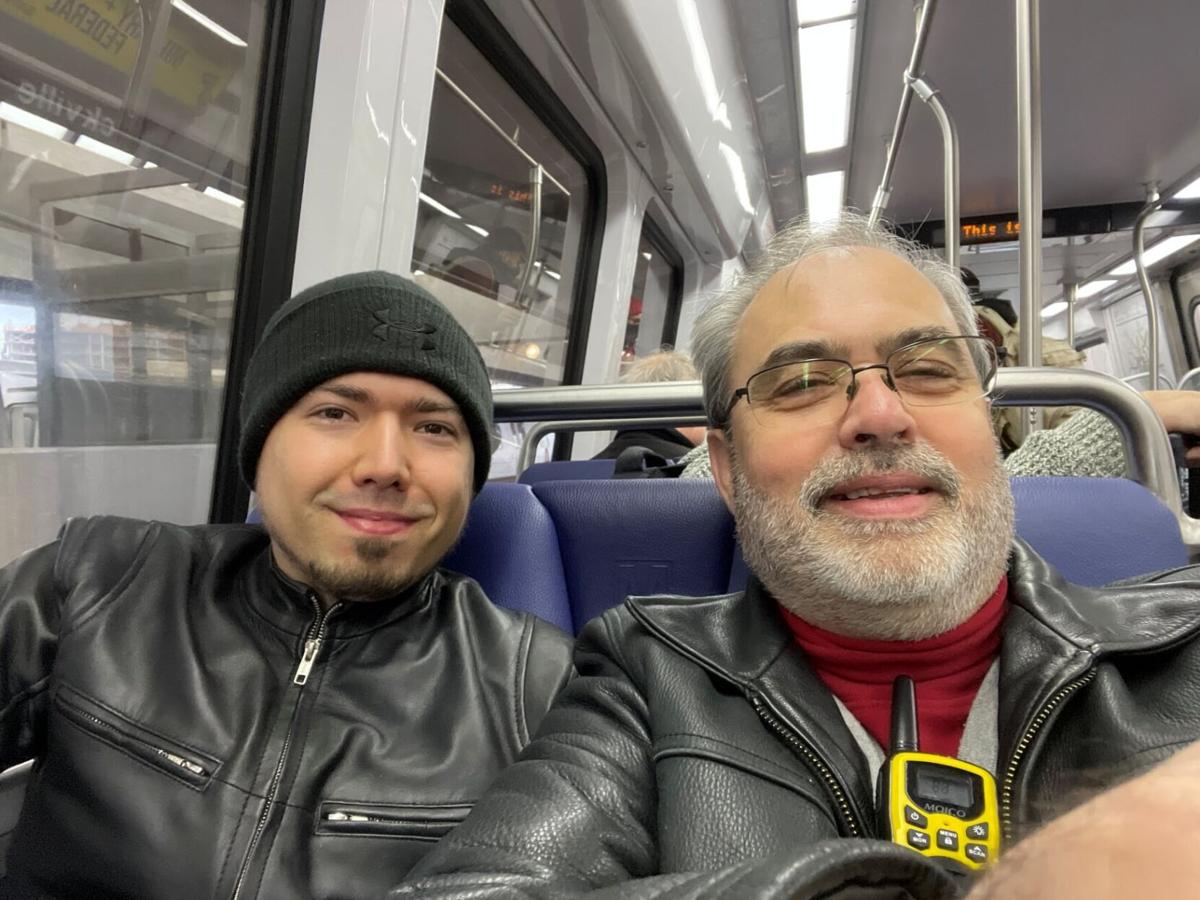 Keim, right, and his son Jonathan, left, are pictured on their way to the "Save America Rally."

WASHINGTON D.C. -- On Wednesday, Joe Keim joined tens of thousands of others in Washington D.C. for President Donald Trump’s “Save America Rally.”

The Ashland resident and former Amish man watched from the crowd as others -- "as small as flies in the distance" -- scaled barriers and broke into the U.S. Capitol building.

He didn’t immediately realize the full extent of what was happening. Members of Congress were evacuated as a mob overcame security and entered the Capitol building.

One woman was shot by U.S. Capitol Police and died. Three other deaths during the day were attributed to medical emergencies. A Capitol police officer died Thursday night from injuries sustained in the riot.

Keim hadn’t visited Washington D.C. with intentions to storm the Capitol building. He hadn’t even come in protest of the election results. He came to attend the rally and demonstrate his loyalty to Trump, who he believes would have been the best fit to serve as president for the next four years.

“We said, ‘We accomplished what we wanted to do. Let’s go,’” Keim recalled a conversation with his son, Jonathan.

They learned of the curfew imposed by Washington D.C. Mayor Muriel Bowser and left.

“We are on our way home, safe and thanking God for His protection. I am truly humbled by everyone’s support and prayer for us,” Keim said in a late Wednesday Facebook post.

“Honestly, I’m not sure what I’m feeling right now. My goal in life is to stay focused on the positives, which was easy most of the day. The people were fun and in good spirit. The speeches were encouraging. We hoped and prayed that God would allow us to experience a last-hour miracle.”

Later in the day, Trump announced intentions to turn his focus towards the transition of power.

“We must get on with the business of America. My campaign vigorously pursued every legal avenue to contest the election results,” Trump said in a video posted to Twitter. “My only goal was to ensure the integrity of the vote. In so doing, I was fighting to defend American democracy.”

Keim was aware of many in attendance who were protesting the election results, but he did not visit D.C. for this reason.

He believes Biden won “to some extent.” He expressed discomfort with digital processing of ballots as he believes it could make tampering with the results easier. He also would like to see photo identification required at in-person voting locations. Mail-in ballots ought to be only for those who need them, he said.

Instead, Keim went to support and thank the president, who he said has led the United States well.

“I am fully convinced that this IS a Movement of God. I also believe that we are seeing the beginning of something so great that only God could get the glory,” Keim said when sharing his travel plans Tuesday evening in a Facebook post.

In the comment section, a Facebook friend inquired, “So you guys are going to DC to try and overturn the election? Just curious.”

“Honestly, I personally am not going there to overturn the election. I am going there because it is my Christian duty to take a stand for the freedom of generations to come,” Keim said in reply. “Others before me stood in the gap so I could enjoy freedom and liberty. The least -- the very, very least I can do is appreciate their unwavering fight against the spiritual enemy and do the same."

In a Thursday afternoon interview, he elaborated. He fears the incoming administration will lead to a version of the United States that too closely reminds him of his former life in an Amish community, where an ordinance letter governed his clothing, occupation, education and more.

“It was not only the type of clothing we wore, but it had to be the right color. Everything was measured out. Long sleeved. One inch collar. Three buttons in the front,” Keim said.

If someone didn’t follow the ordinance letter, he recalled how they’d be brought before the church and publicly shamed.

“It put you in a box. You were born in that box and expected to live in that box, and when you didn’t you were disciplined,” he said.

The state of Ohio’s mask mandates already make him uncomfortable. It’s out of respect for his customers that he wears the face coverings at Beyond Measure Market, his bulk food store in Greenwich.

“What I fear about the new administration is that they are big on government. They have so many rules,” Keim said.

Keim said he values hard work. He said he was raised to believe people should reap the benefits of their own efforts.

“You start up your own business. You work hard, but it’s your money,” he said.

He’s protective of the freedoms he achieved when leaving the Amish and has since created a ministry called Mission to the Amish People (MAP), which assists former Amish to assimilate into communities outside the ones where they grew up.

Keim and his son traveled to Washington D.C. on Tuesday. They checked into a motel around midnight and allowed themselves a few hours of sleep before waking early for the "Save America Rally.”

The pair arrived at their destination at nearly 9 a.m. By this time, tens of thousands of fellow Trump supporters were already waiting for Trump’s appearance around noon. Friends had arrived at 4 a.m. and intended to save Keim a spot, but Keim couldn’t get in touch with or find them amid the sea of people.

“We did walk around and try to find a spot, but it was challenging because the crowd had already formed,” Keim said. “If you weren't right down the center of the group -- because there were speakers on both sides -- it echoed, and it was kind of hard to hear.”

The grass was damp, but they sat anyway. Keim anticipated being on his feet for much of the day. 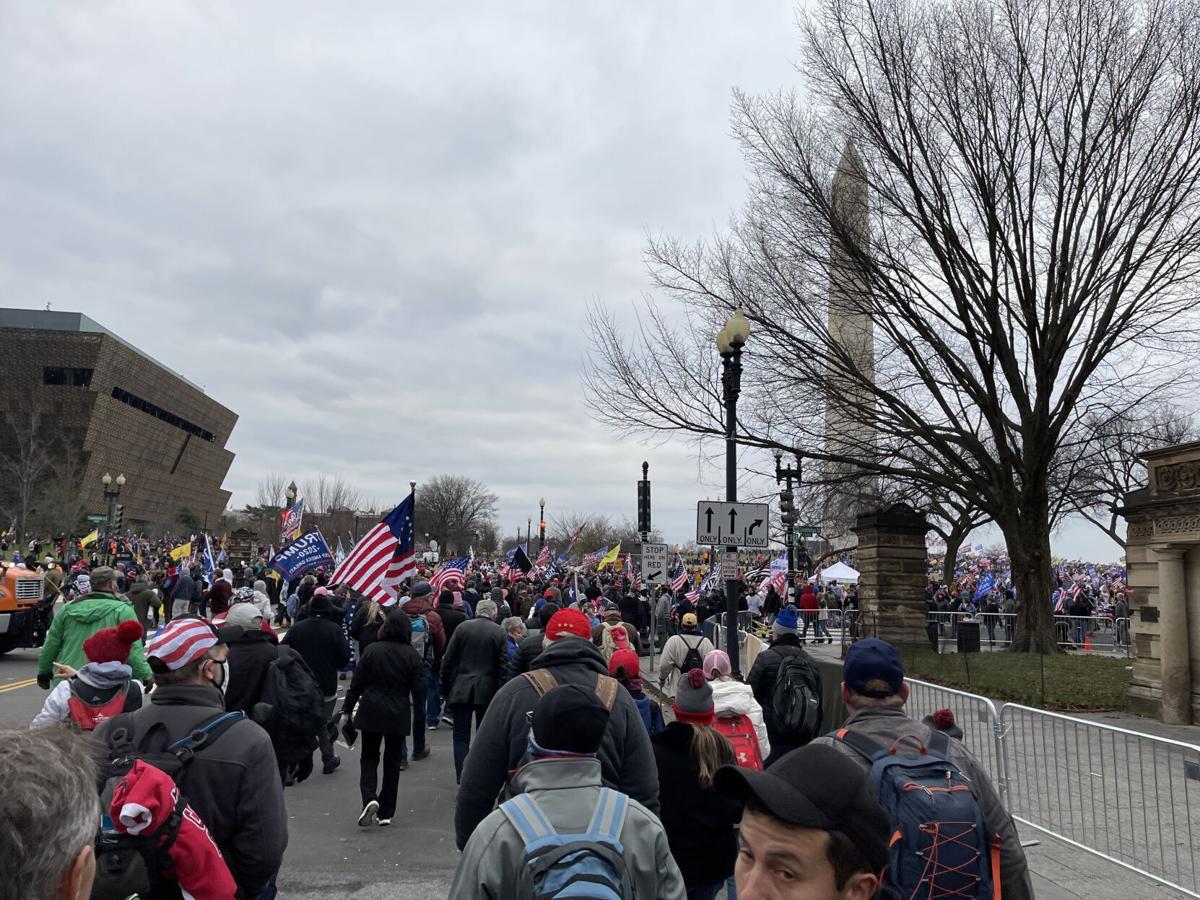 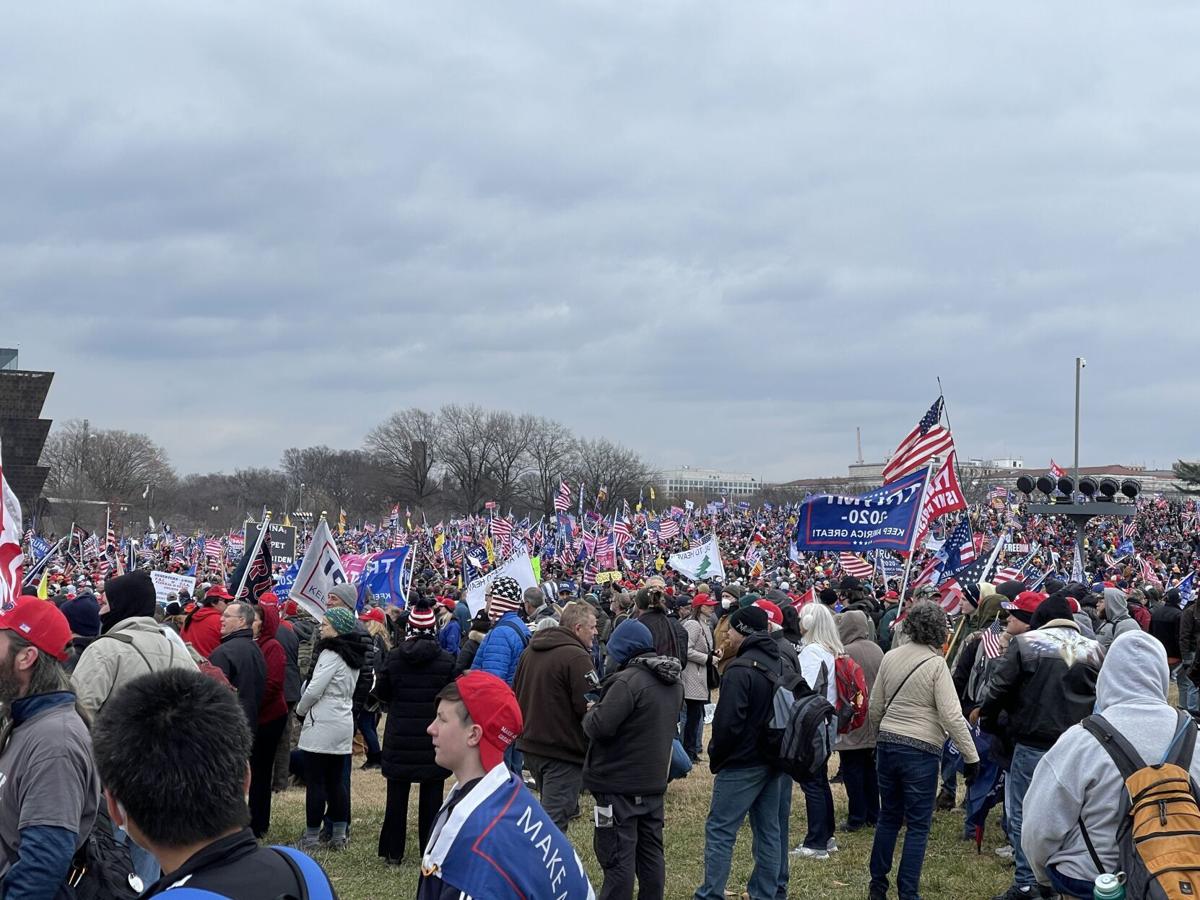 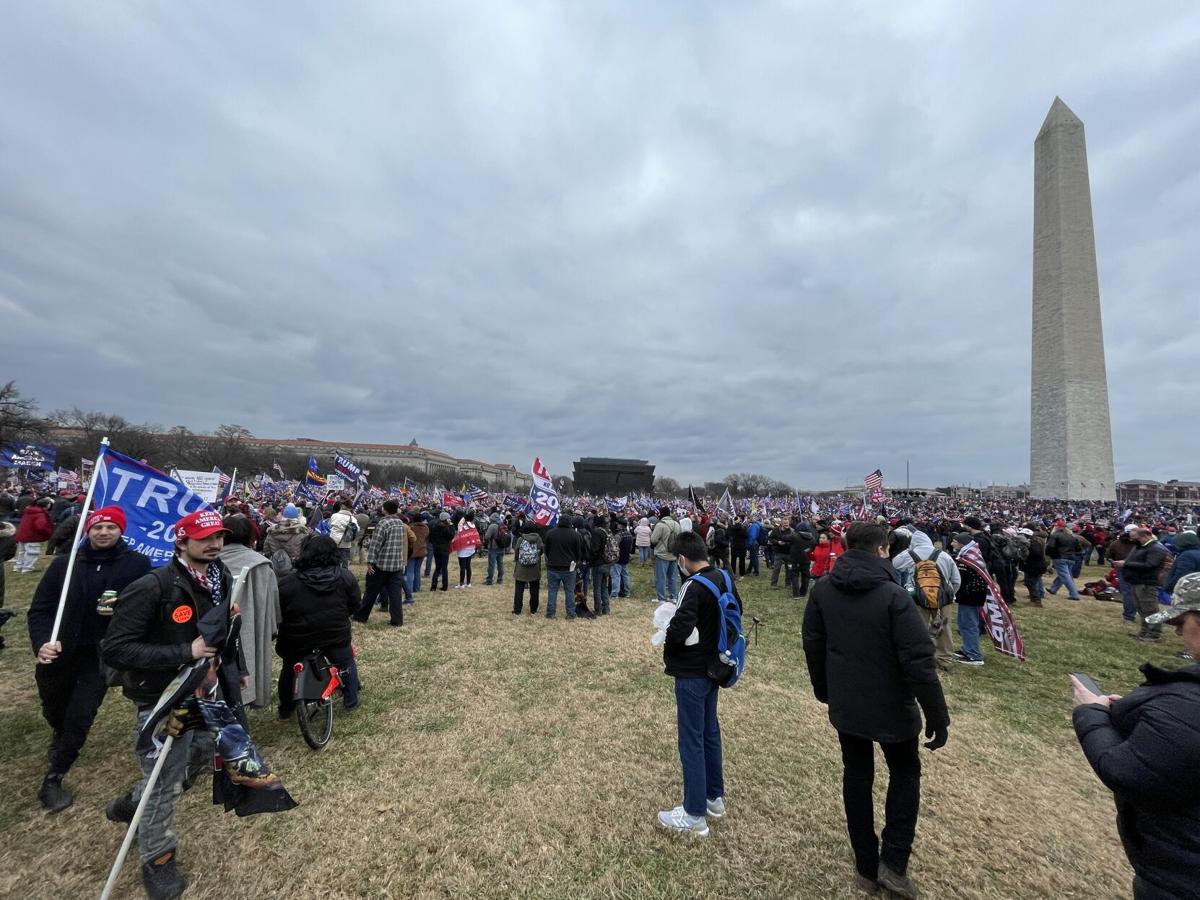 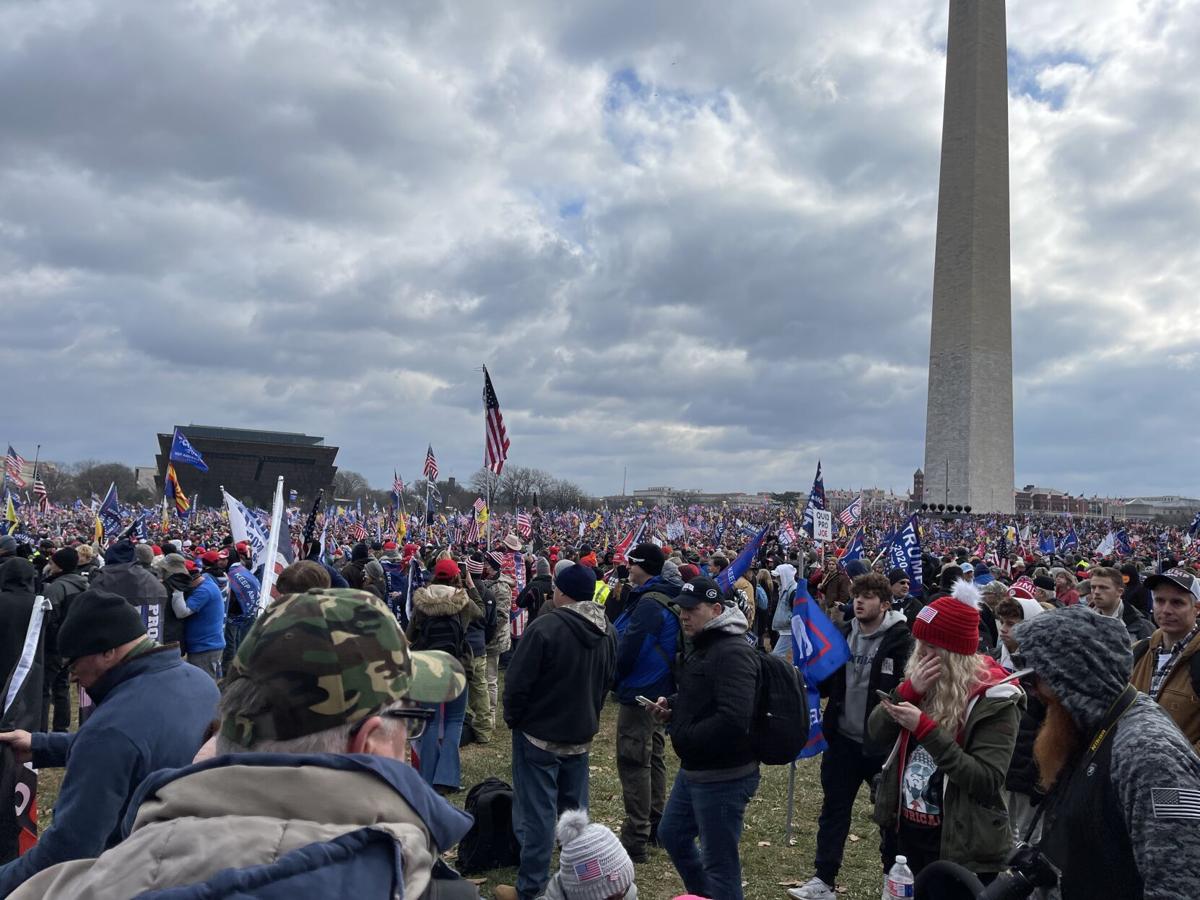 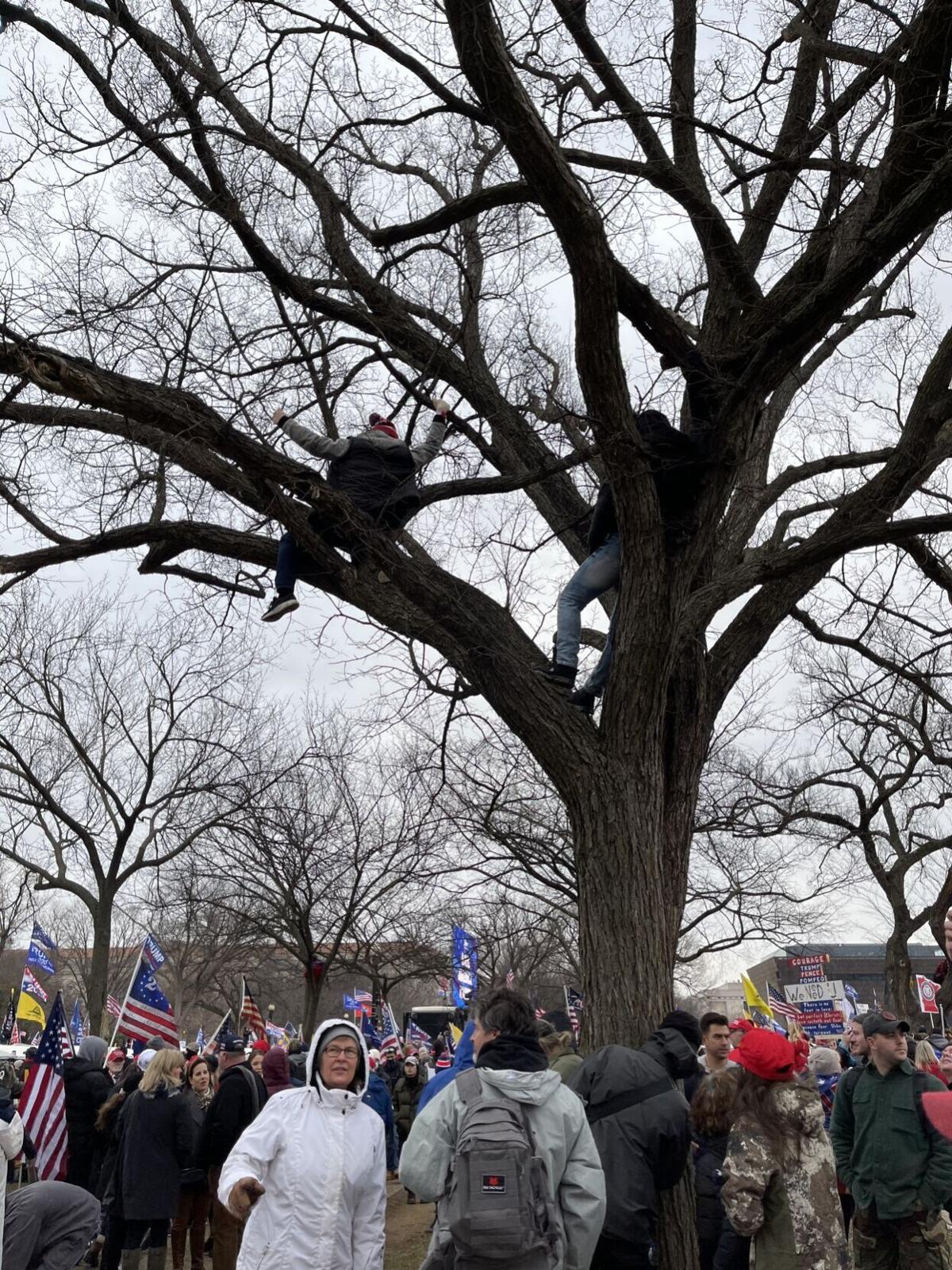 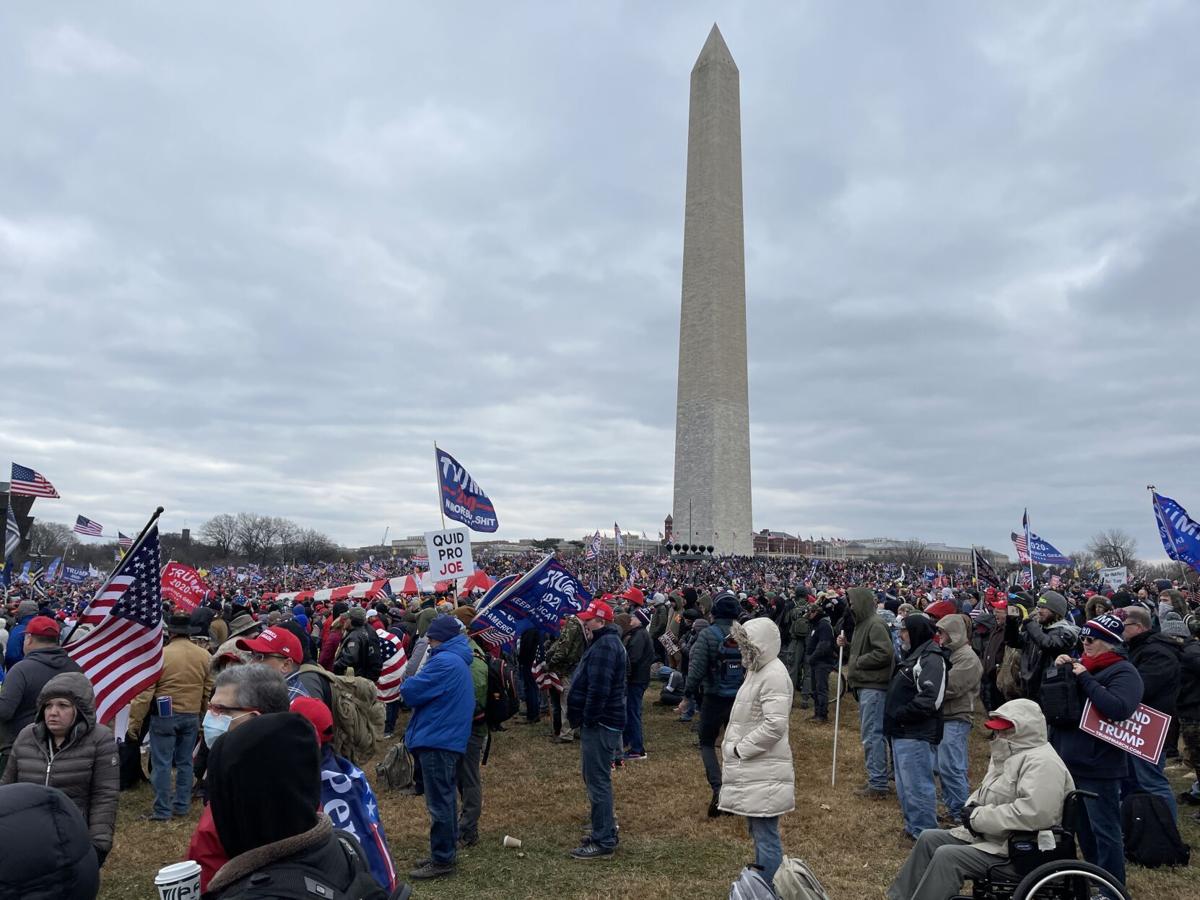 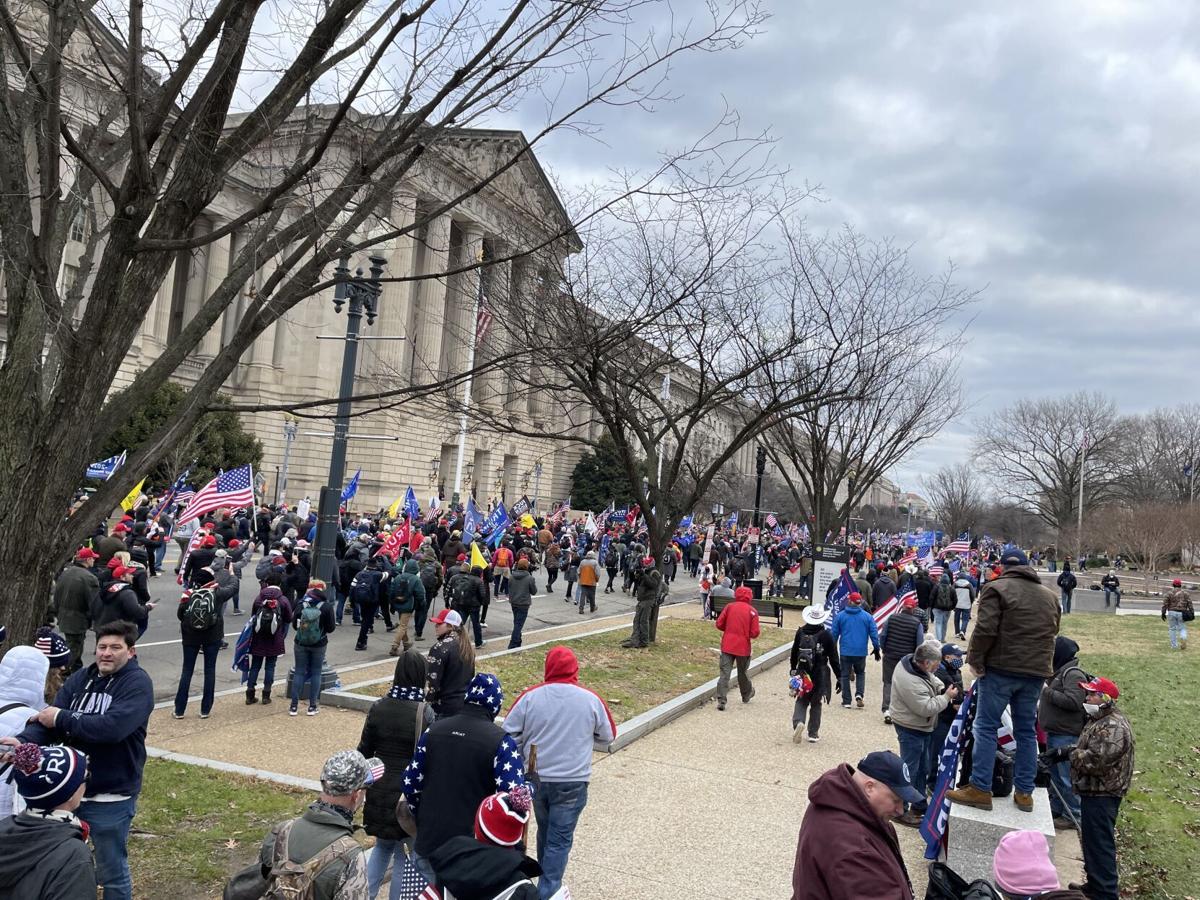 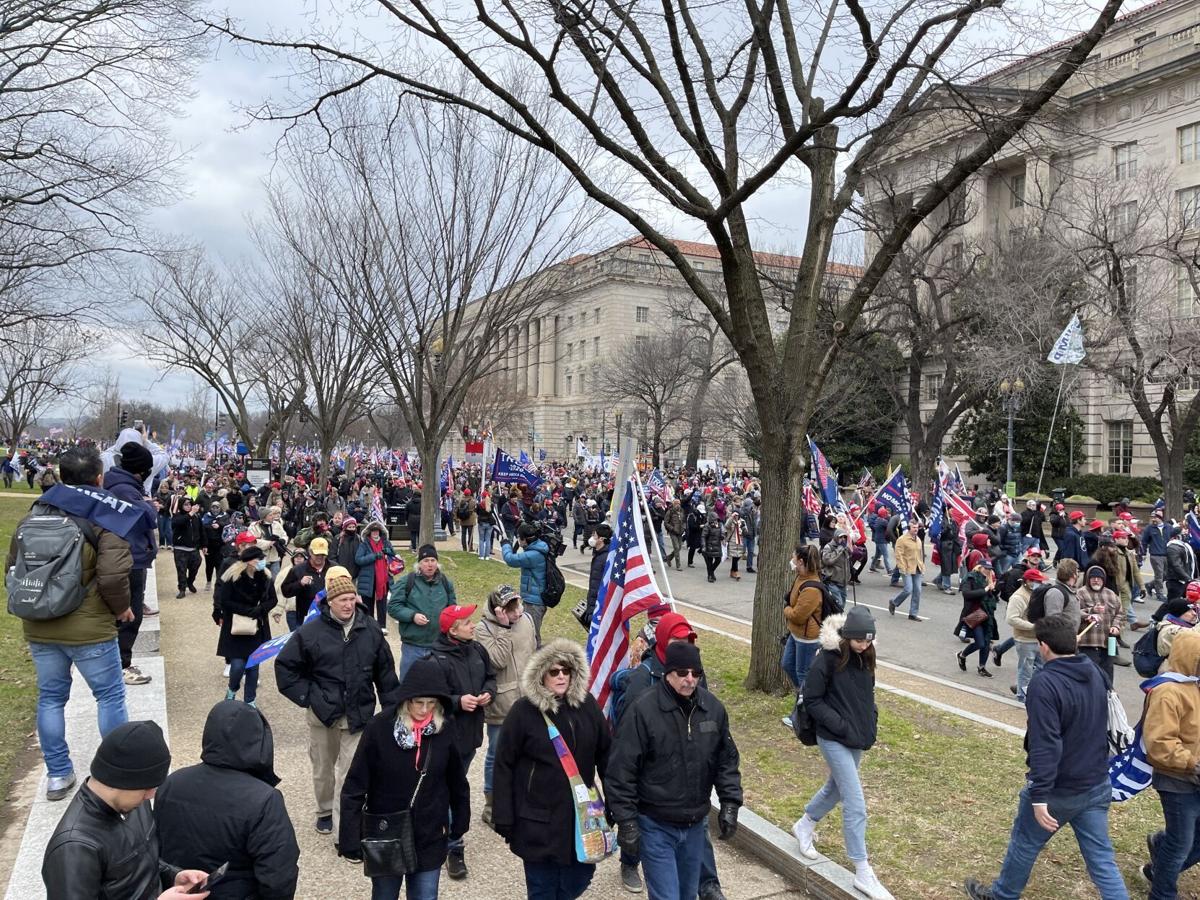 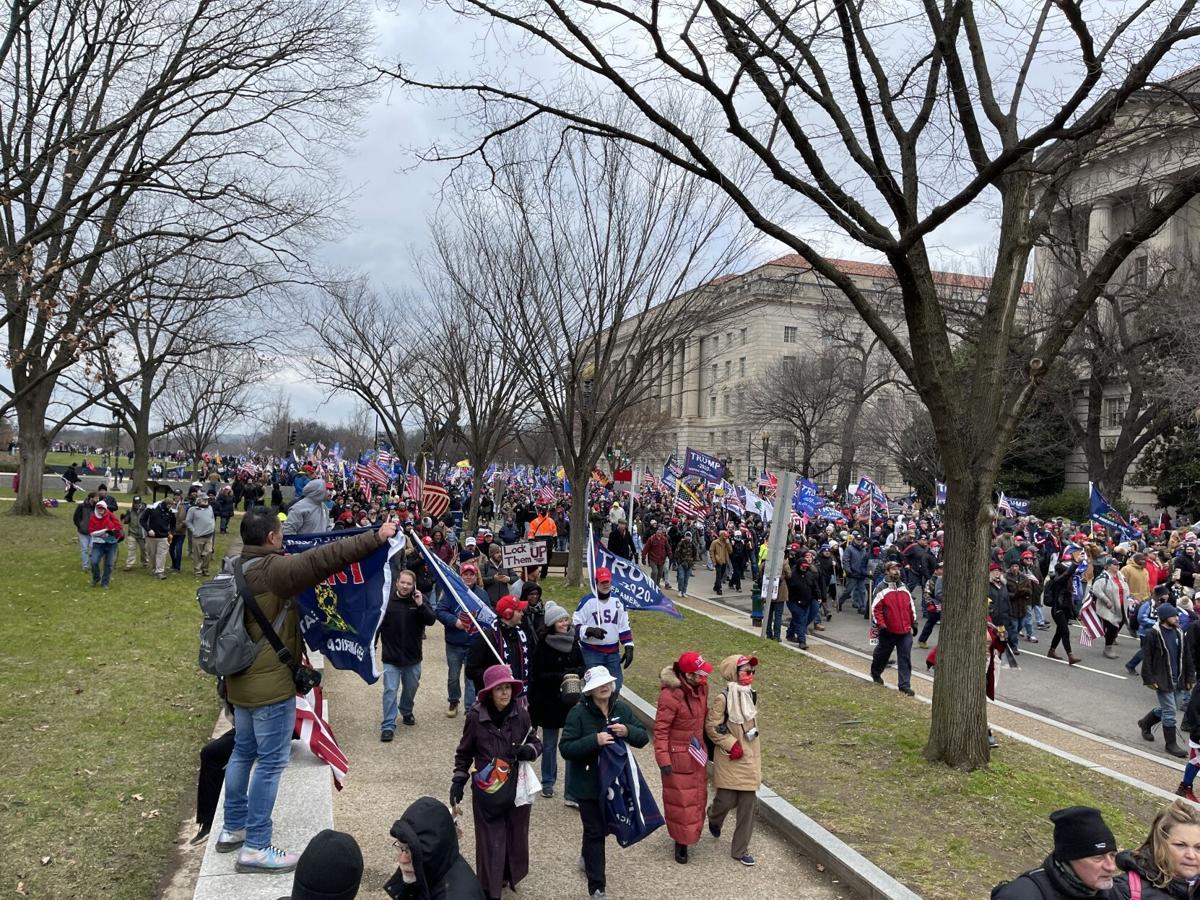 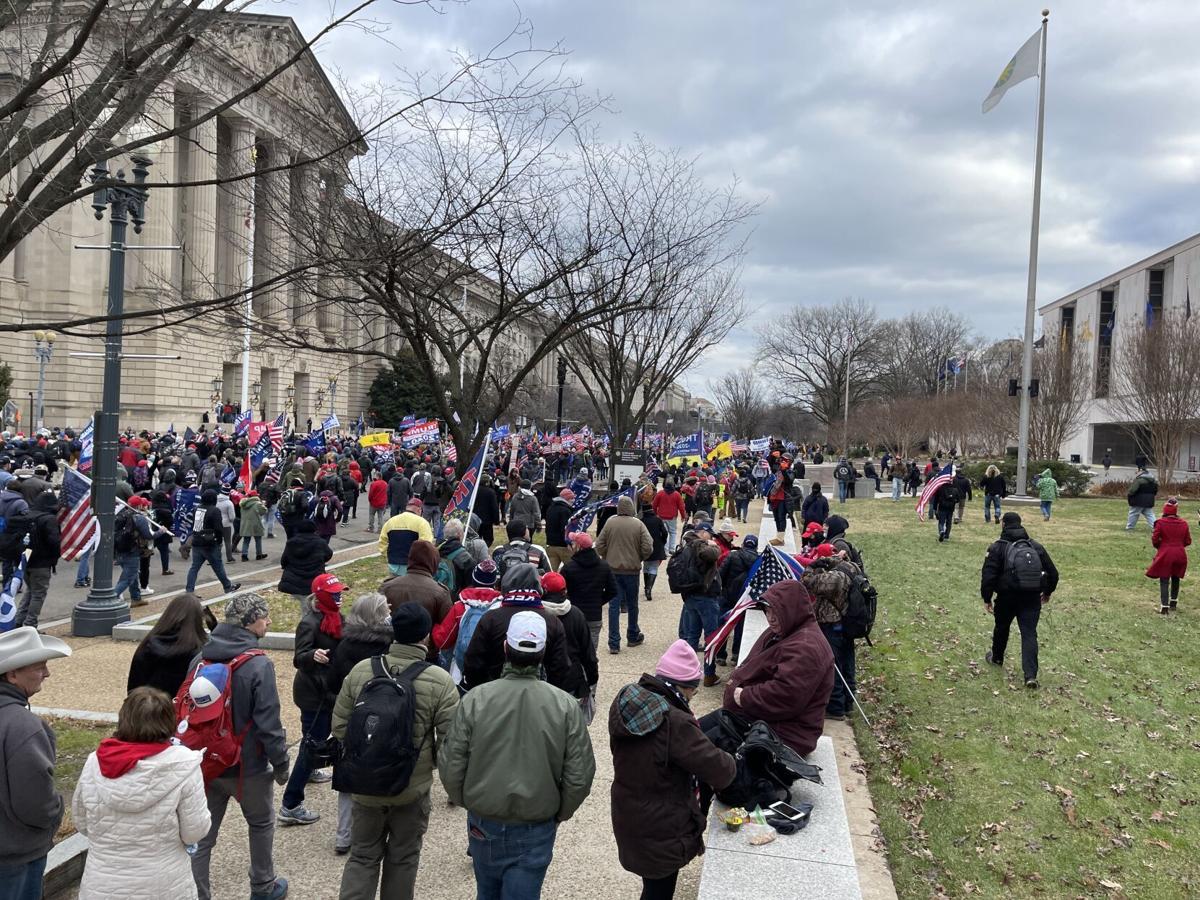 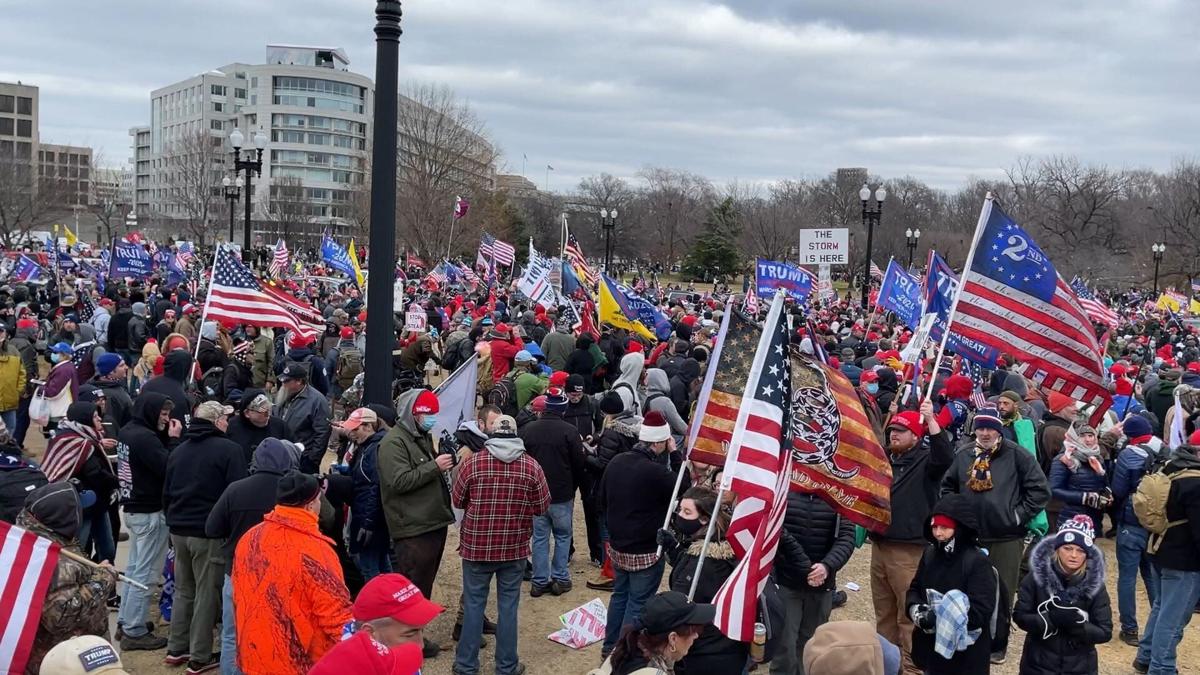 Joe Keim submitted these photos from his trip to Washington D.C. on Jan. 6, 2021.

They waited and watched as others spoke before the president. He recalled how the already high-energy crowd erupted with excitement when Trump walked onto the stage.

They could see, but couldn’t hear the president well as he questioned the validity of the Nov. 3 election.

“All of us here today do not want to see our election victory stolen by emboldened radical Democrats,” Trump said. “We will never give up. We will never concede. It will never happen. You don’t concede when there’s theft involved.”

Since they couldn’t hear well, Keim and his son left the president’s rally and joined the crowd walking towards the Capitol building before Trump finished speaking.

The streets and the adjacent sidewalks were packed with people, all marching in the same direction, he recalled. As he walked, others with megaphones led the crowd in chants of “USA” and "Stop the Steal."

Ninety percent of the crowd seemed to be carrying a flag of some kind, he estimated. Others were dressed in red, white and blue attire.

“It seemed like as far as you could see in both directions there were people. I’m telling you, they were packed in like sardines,” Keim said.

As time went on, the crowd around him seemed to grow in number. He believed the majority were Trump supporters like himself, but he heard rumblings that members of the anti-fascist protest movement (ANTIFA) were also present.

“I won’t go as far as to say they got into the Capitol building, but there was a whole busload that got dropped off, and they were there. Somehow, they were involved,” Keim said.

The individuals who broke into the Capitol building were too far away for him to confidently speak of their intentions. He hadn’t interacted directly with them.

From his perspective, the individuals who entered the Capitol did not represent the majority of those in attendance.

“There were literally sirens everywhere, and they weren’t moving because people were blocking them. It was then that I made the connection,” Keim said. “These were cop cars. They were trying to get up Constitution Avenue, go up, on and around to where they could get to these people who had jumped the fence.”

As they walked away from the Capitol building, he saw some of the drivers back up and retreat as people laid in the street, preventing the police vehicles from moving forward. He saw people who he described as “mad” and “angry.” These individuals were screaming, cursing and even using flag poles as rods in front of them.

“I’m going to guess they were Patriots… They were fed up. The energy level was high. They probably did things they didn’t plan on doing,” Keim said. “It was a moment where they were going to protect our people, going to do whatever they’ve got to do stop those guys from getting up there.”

Keim pulled his cell phone from his pocket and joined others in filming the scene. He recalled feeling badly for the police officers who were “just doing their job” and couldn’t imagine personally being one of the people who would cause difficulty.

“It happened literally right in front of us. You couldn’t get away from it. It was right there in front of you,” he said.

As Keim thinks about the future of the United States, the Ashland man said he feels powerless. He worries his fears won’t be considered and his voice left unheard.

“From a Christian perspective, my only hope is God,” Keim said. “Right now, I’m just going along with the flow. I don’t know how else to say it. It’s a terrible feeling.”

“I’m glad I went. I’m sad because of the choices that were made by government authorities,” he said in the post. “I’m worried that we are going to experience some of the greatest evil this world has ever experienced. But we cannot lose hope. If we lose hope, we lose faith. If we lose faith, it is impossible to please God.

“Let’s hang together. Pray for one another. Talk to our families and prepare for the coming days. We know the last chapter in the Book. God will have the last say... in His time.”

Shelby councilman went to D.C. to protest for election reform

Nathan Martin said he didn't go to Washington, D.C, this week to try to overturn an election and certainly not to assault the U.S. Capitol.