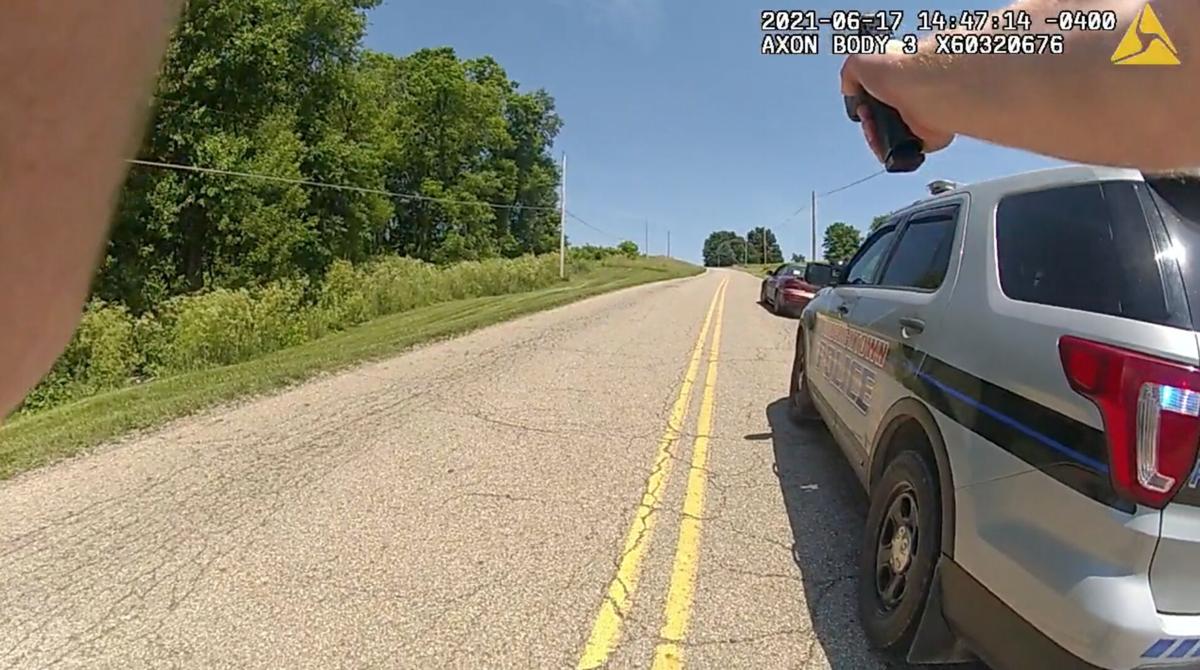 This image was screen-captured from video footage of the Fredericktown police shooting on June 17, 2021. 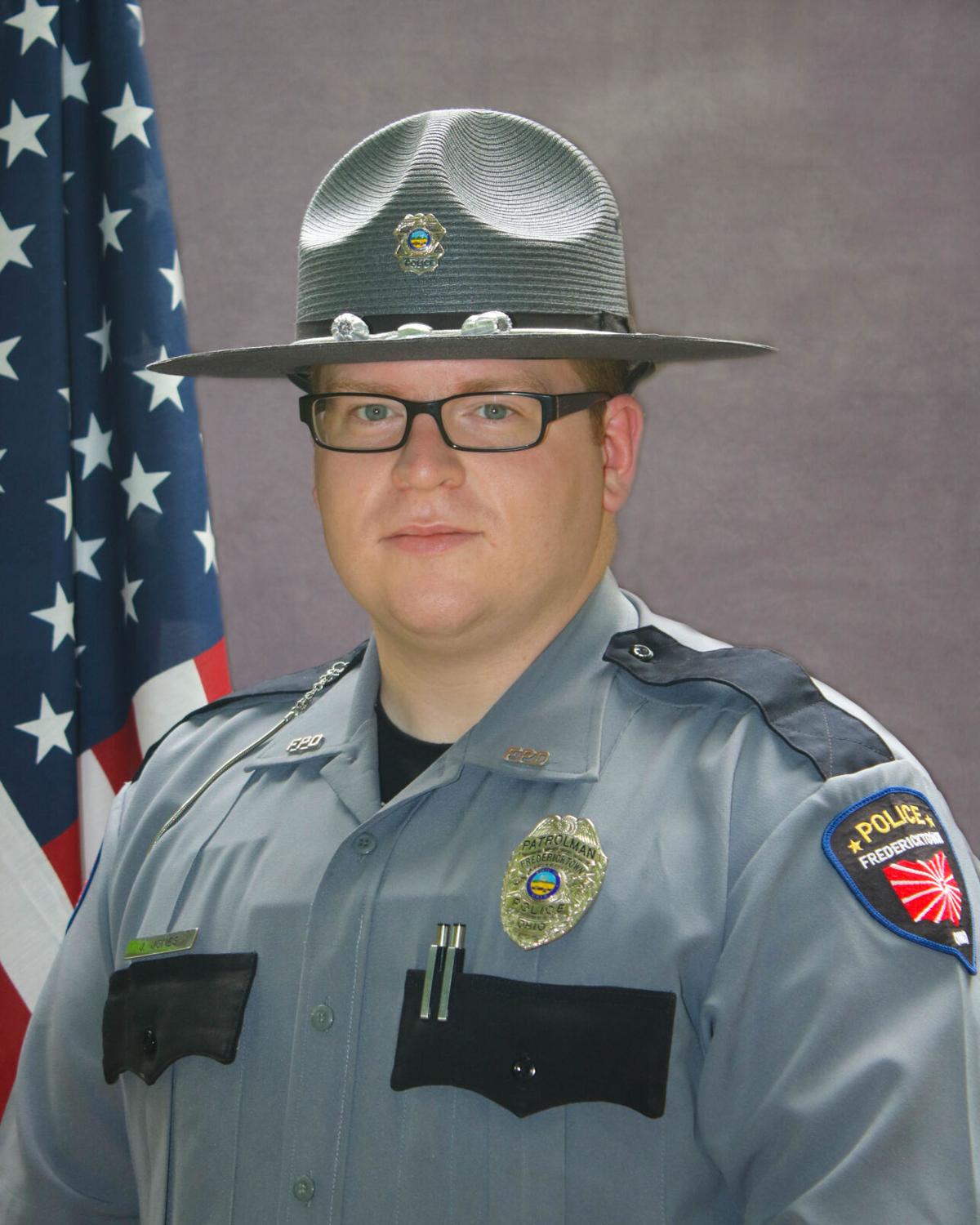 Patrolman Josh Jones is one of five full-time officers at the Fredericktown Police Department, according to Chief Kyle Johnson. It's currently unclear how long Jones has worked at the department. 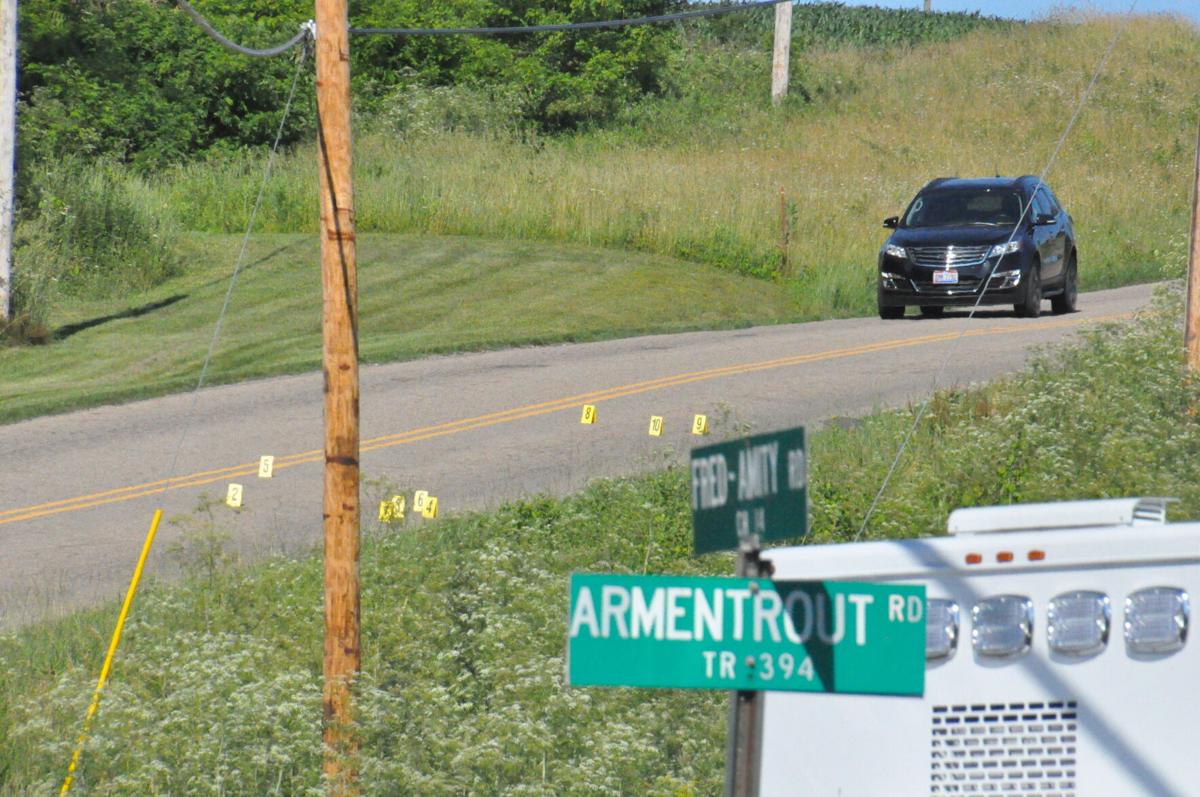 The footage, which was obtained by Knox Pages through a public records request, was captured by Patrolman Josh Jones' body-worn camera. It shows the incident from start to finish.

Six seconds of audio was redacted, as it contained "information of a person who is not arrested, cited, charged, or issued a written warrant by a peace officer," Chief Kyle Johnson said. Ohio law allows this information to be redacted.

The video begins with what appears to be a routine traffic stop, conducted by Jones on Upper Fredericktown-Amity Road, near the Armentrout Road intersection.

As Jones approaches the maroon Pontiac sedan parked midway up the hill, he sees a man pointing what appears to be a gun out of his driver's-side window. Jones appears to pivot, retreat, then fire several shots.

Seven shots appear to be fired during the exchange. It's unclear if the man in the maroon Pontiac unloaded any rounds.

After gunfire is exchanged, the red Pontiac speeds off up the hill. Jones gets back in his cruiser and follows.

"42! Shots fired!" a dispatcher can be heard saying on Jones' radio. "42," Jones confirms. "They're going at a high rate of speed towards Amity."

The traffic stop occurred at 2:46 p.m., according to Jones' body-worn camera. Over the next two minutes, he chases the maroon Pontiac north on Upper Fredericktown-Amity Road, eventually losing sight of it near the Richland County line.

Jones describes the vehicle and its passengers to dispatchers during the pursuit, and also says "I did get some shots off."

Jones was asked multiple times during the pursuit about his status.

The pursuit reached speeds of over 100 miles per hour, Jones told dispatchers. Other units from agencies across the area can be heard joining the pursuit via radio.

Jones continued to trace Knox County's backroads in search of the vehicle, but to no avail. He asked dispatchers to notify Fredericktown Mayor Jerry Day of the incident at 2:56 p.m., then officially terminated the pursuit.

Jones then traveled back to the scene of the shooting to receive medical care from the Fredericktown Community Joint Emergency Ambulance District.

The maroon Pontiac was found abandoned in Richland County at approximately 5 p.m., according to Knox County Sheriff David Shaffer. In the hours that followed, state and local agencies sought the public's assistance in locating the individuals who occupied the vehicle.

Public tips and private investigative tactics allowed police to identify the male in the vehicle as Darren L. Price, 38, of Howard, on Tuesday. The Knox County Sheriff's Office issued a warrant for his arrest.

But neither Price nor the female allegedly riding in the passenger's seat had been apprehended as of Wednesday.

"Price should be considered armed and potentially dangerous. He may have altered his appearance after the incident," Shaffer said in a statement. "Anyone with information is asked to contact the dispatch center at 740-397-3333 ext. 1."

Jones was placed on administrative leave following the incident, per department policy. The incident remains under investigation by the Knox County Sheriff's Office, Fredericktown Police Department, and Ohio Bureau of Criminal Investigation.

FREDERICKTOWN – Law enforcement officials say they have identified the individual suspected to be involved in last Thursday's police shooting in Fredericktown.

FREDERICKTOWN — The Ohio Attorney General’s Bureau of Criminal Investigation along with the Knox County Sheriff’s Office and Fredericktown Police Department are seeking the public’s assistance in identifying a man who pointed a firearm at a peace officer Thursday during a traffic stop near Fredericktown.

The search for two armed suspects near the Richland County line is tied to an officer-involved shooting that allegedly occurred in Fredericktown on Thursday afternoon, according to local law enforcement officials.

MOUNT VERNON – Deputies from the Knox County Sheriff's Office are seeking help from the public in locating two individuals, allegedly armed, near the Richland County line.

FREDERICKTOWN – The man who law enforcement officials say pointed a gun at a Fredericktown police officer last week has been apprehended, according to Knox County Sheriff David Shaffer.