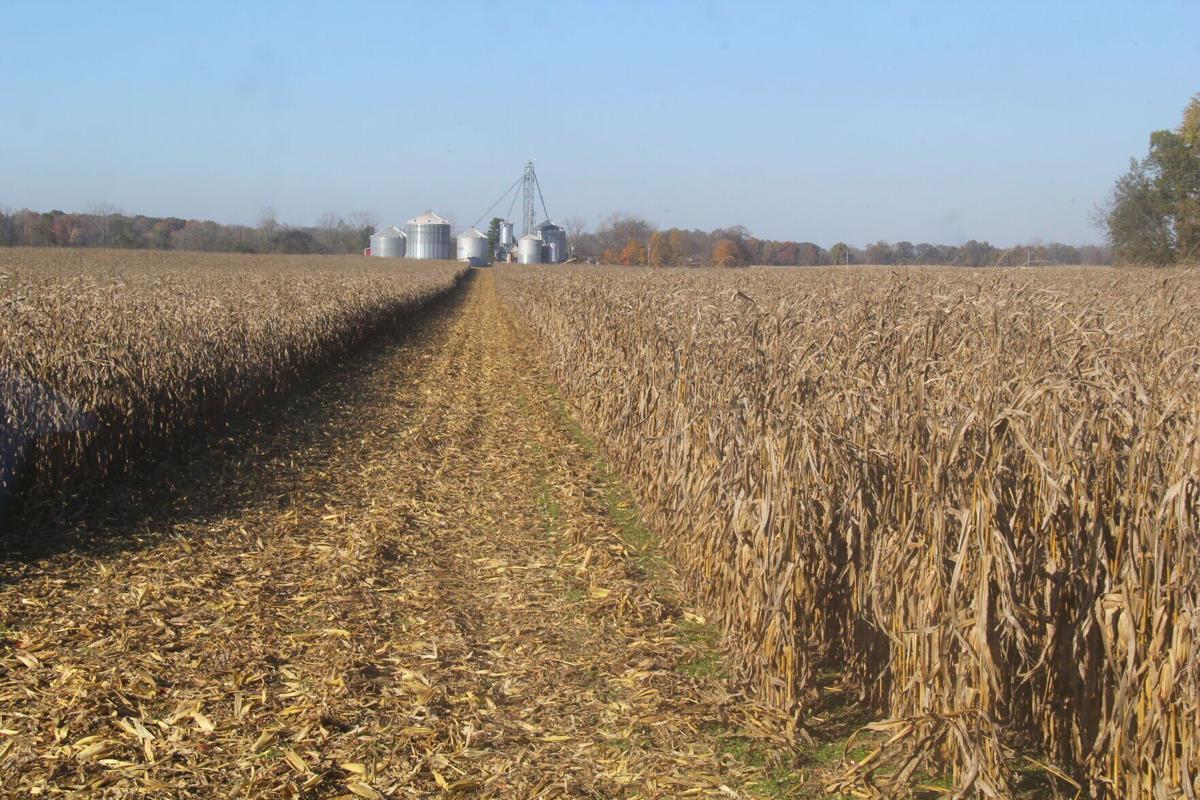 Stalks and other scraps trail behind as grain farmer Ed Piar harvests corn. 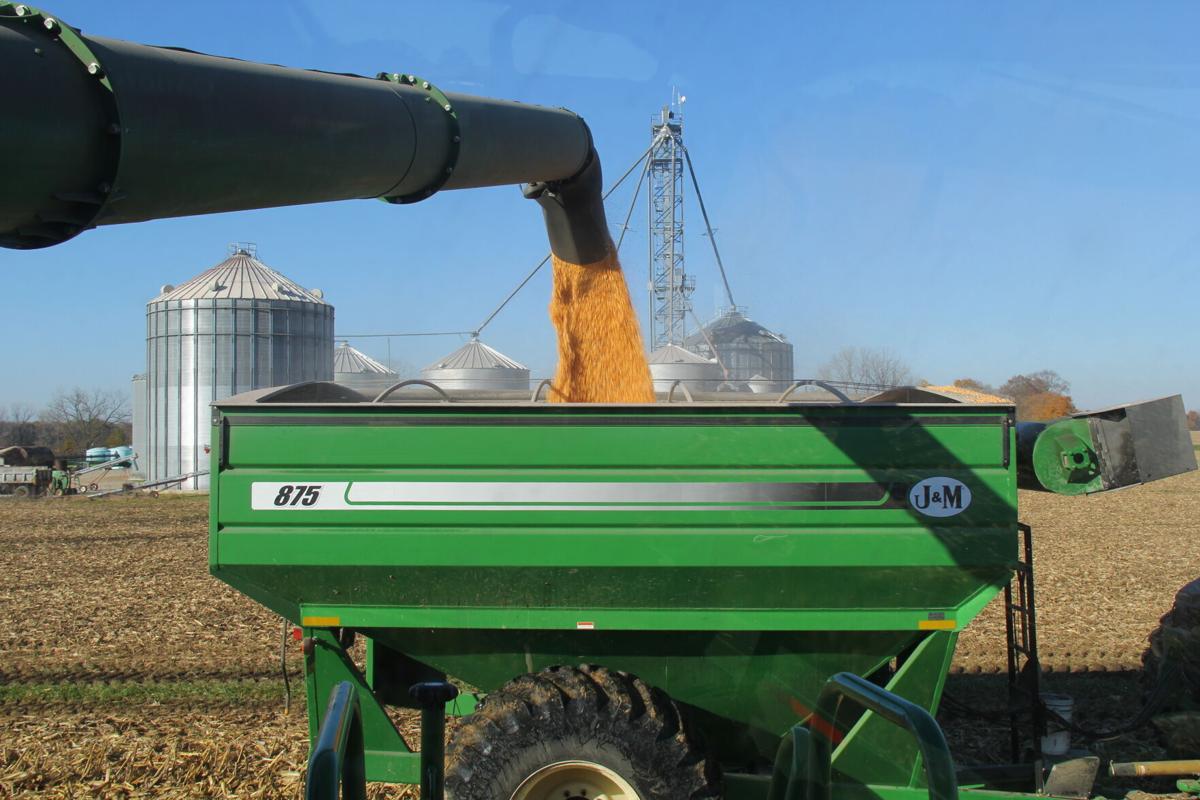 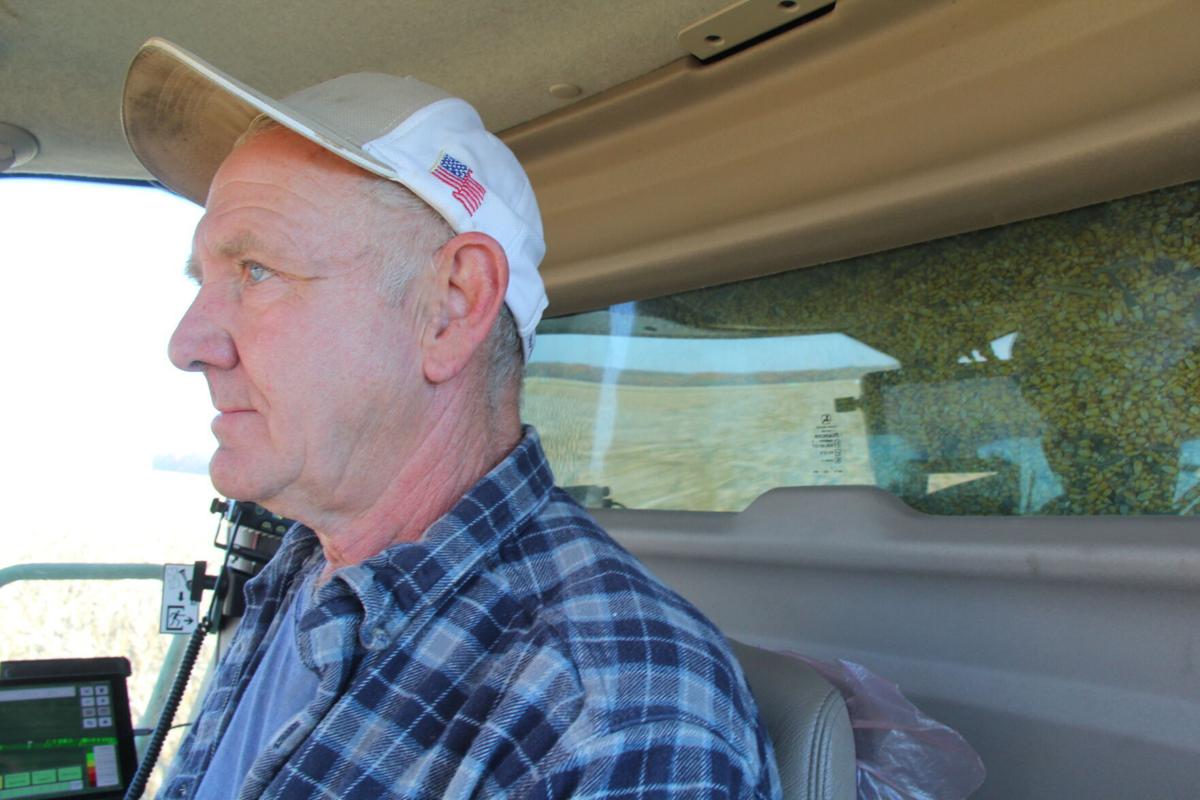 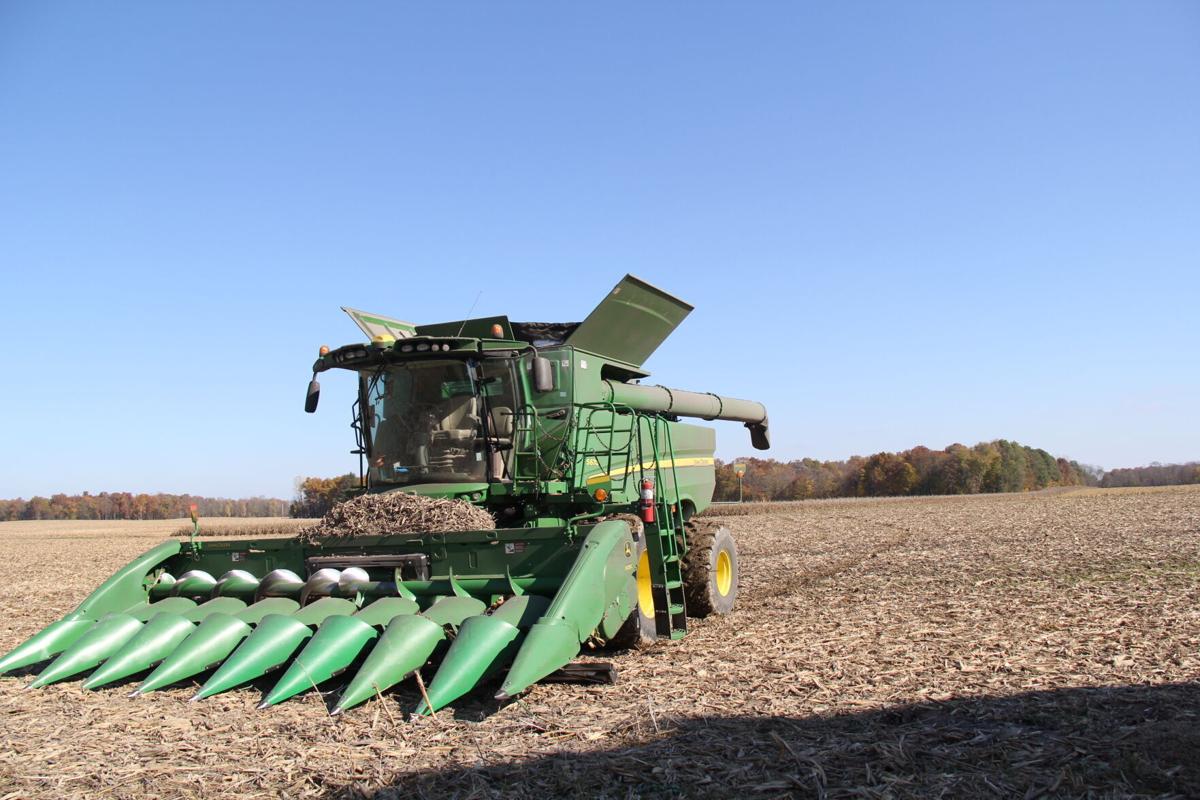 The combine Ed Piar uses logs harvest results in the form of maps that can be consulted to assess the success of harvest in particular geographic areas. 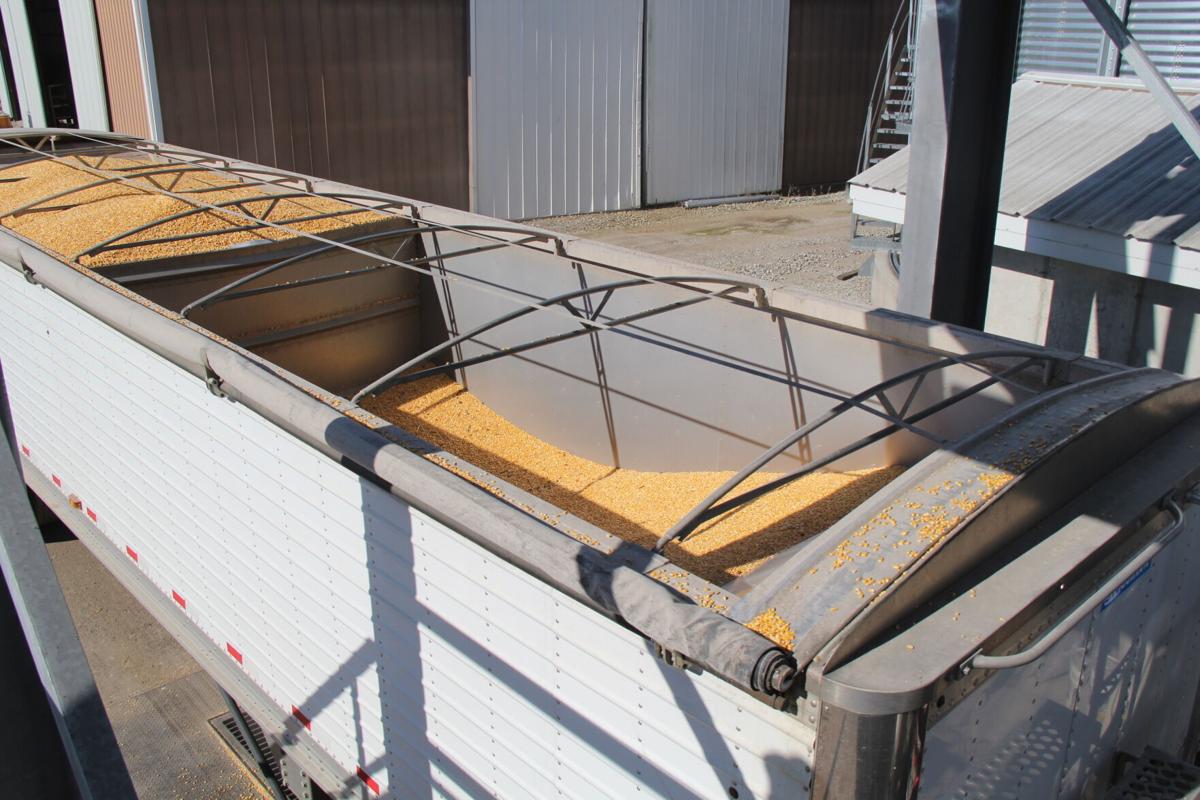 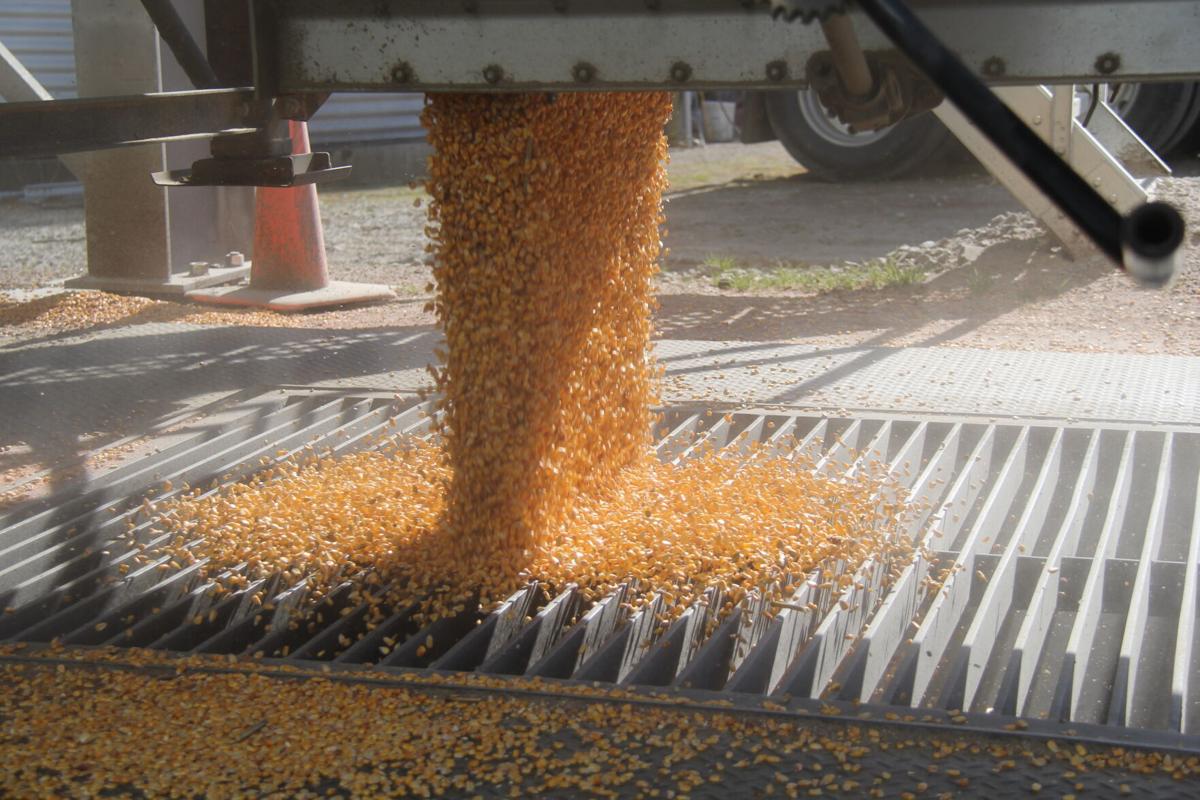 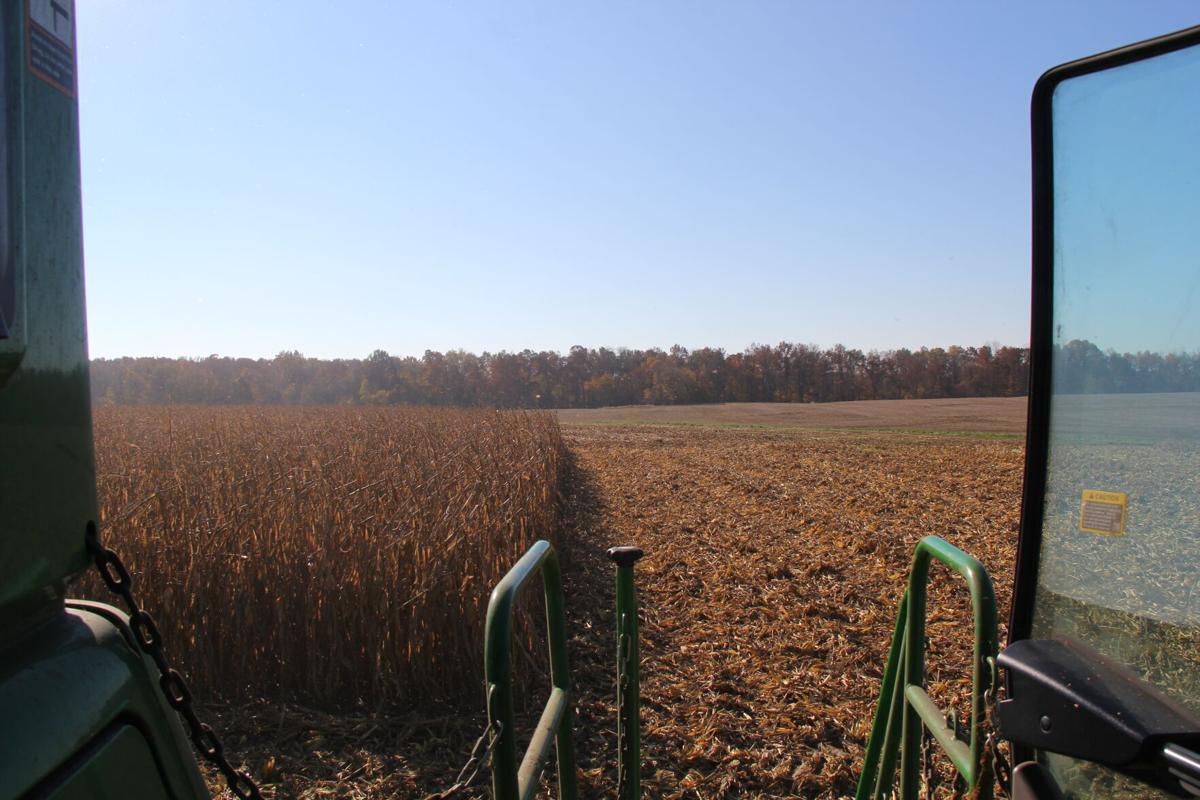 A view of one section of the approximate 2,000 acres Ed Piar will harvest this fall.

ASHLAND -- Grain farmer Ed Piar is days away from concluding this year’s harvest.

Once the frost melts off the remaining corn stalks on his land in southern Knox County, he begins his days on the combine harvester and does not stop until after the sun sets, which is common for farmers across north central Ohio.

In the agriculture business, Piar is no stranger to dealing with the unexpected. Usually he is able to adapt, but in recent months Piar said he has found himself facing one problem after another with solutions seemingly outside of his control.

“You never know what might be available,” he said, whether it be services delayed at the manufacturing, distribution or transportation level.

Piar is expecting above-average prices for his crop this year, he said. However, this profitability is not expected to be long-lived because of rising fertilizer prices.

“Grain prices are strong,” Piar said, “but the increase in inputs is eating it all up.”

Empty shelves and rising retail food prices have drawn concern about the affordability and availability of food throughout the COVID-19 pandemic. The pandemic-era economic impacts on farmers have been less visible.

Farm income has fluctuated throughout the COVID-19 pandemic with variations in commodity prices, production and government support. A key issue in north central Ohio is supply chain disruptions, but farmers are also already concerned for next year’s harvest profits as supply shocks and high demand boosts fertilizer prices.

A supply chain is the entire process of making and delivering commercial goods: from people who first acquire the raw materials to the person who buys a finished product, and every small step in between.

The COVID-19 pandemic saw increased disruptions to this process.

Lockdowns at the start of the pandemic reshaped supply and demand, with panic buying and demand shifts that have caused cascading impacts through the supply chains that make up the economy at large.

While low supply and high demand is part of the equation, the common denominator is people.

Supply chains rely on the availability of equipment — but also people, whose lives and work have been upended throughout recent years, with business closures and the reassessment of work.

Agriculture, as is the case with other industries, is grappling with the lasting effects of pandemic-era disruptions.

“I've got some little fingers that are on my grain hand that run into the drum, and those have been backordered for six weeks so we’ve just been running without them,” Wesner said.

While a grain finger is a part Wesner can get away without for the remaining harvest, there are other parts that farmers cannot do without, which Wesner said has led some of his neighbors in need of parts to search in junkyards or seek out help from other farmers.

Part delays are not the only issues for grain farmers.

Carl Ayers, a dairy farmer in Loudonville, has faced delays getting replacement parts of all kinds. Ayers employs 22 people on 2,000 acres and milks 650 cows.

Specifically tires, a product many farmers cannot do without, have been difficult to locate and acquire in a timely manner, Ayers said.

He also noted new equipment delays have been especially long, which John Barker of The Ohio State University Extension college of food, agricultural, and environmental sciences said is the case for farmers across Ohio.

New farm equipment that has already been ordered may not be delivered in time for the spring planting season, according to Barker.

Orders for large machinery, such as tractors, are also being delayed by smaller part delays, as a U.S. manufacturer may assemble a product but rely on foreign manufacturers for raw materials or parts.

“(A company) might assemble the tractor or whatever domestically, but they need certain parts or certain bits of it (that) are produced outside of the U.S.,” Shoup Tournoux said. “It's getting those pieces in that was really delaying things.”

In addition to concerns about increased inputs, order delays can cause complications with taxes.

“Farmers, depending on how they do their accounting, sometimes if they make a purchase on equipment, they would really like to get that equipment within that year for their taxes and things,” Shoup Tournoux said. “So it kind of adds another layer of complication if the equipment is so delayed that the purchase and then the receiving of the equipment are in different years.

“That can kind of throw a wrench in some people's accounting.”

The farmer from Knox County, Piar, said he prepared for the delays. He purchased some parts and fertilizer well in advance, something he said he makes a habit of every year to avoid unexpected disruptions.

However, supply chain issues are not occurring in a vacuum. The delays in other industries, as well as staffing shortages, have caused disruptions to farm exports.

“It's an awful lot like going down a freeway,” he said, “and you're like, ‘What in the world is all this traffic?’ And all it took was one person two miles ahead who slowed down to look at the wreck on the other side, and you get this big backlog.”

In Piar’s case, truck driver staffing shortages have limited when and how much product can be exported from local farms, he said. The Central Ohio Farmers Co-op, located in Knox County, usually has three local truck drivers but is currently down to one, with other part-time help, co-op manager Jamison Price said.

Fertilizer prices have been rising throughout 2021, with the fertilizer index hitting record highs — bypassing past the previous 2008 peak. The reasons for rising prices abound: increased energy costs, extreme weather, shutdowns, and sanctions.

In some instances, fertilizer prices are double what they were last year. Increasing prices for natural gas, a key item in producing nitrogen fertilizers that are heavily used on corn, are a factor in pricing changes.

Bayer Crop Science’s glyphosate manufacturing plant in Louisiana ceased production following Hurricane Ida. The plant was one of the largest U.S. producers of glyphosate, the main ingredient in Roundup.

Natural disasters outside of the U.S. have also further complicated price spikes. In Canada, flooding concerns led fertilizer producer Mosaic to close its biggest potash mine. Potash is a crop nutrient used to increase yields.

These price increases may lead farmers to switch to crops that need less fertilizer, or switch to other fertilizers. Whether farmers can even acquire the fertilizers due to delays compounds the issue further.

“I've been in ag my entire life, and on the retail side for over 20 years,” Price said. “We have always dealt with a shortage of something, but it's never been the whole spectrum.

"We would always have a chemical that was tight or we would have a fertilizer that was short, but we've never had to deal with the entire ABC.”

At the same time, the 2021 harvest season is seeing high yields.

The United States Department of Agriculture has estimated record yields for corn and soybeans this year, key crops in Knox and Ashland Counties. So far, these estimates have rung true and even increased from September to October’s reports, although production varies throughout Ohio’s diverse weather and soils.

Prices for these products are also high as demand remains high, said spokesperson for the Ohio Farm Bureau Ty Higgins.

While the current market may have factored in supply-and-demand issues, it has not yet accounted for next year’s production prospects.

“Short term, farmers just hope they can keep going with harvest and not get caught up in a part they can't find,” Higgins said. “In the long term, they want to be sure that they're able to grow a crop and have the inputs on hand and make it to where they can still at least break even after next year's harvest, due to the high cost of operating.”

Overall, price changes and parts delays are not a direct result of only one problem, said Brad Reynolds, communication director at Ohio Corn and Wheat, a group that lobbies for opportunities for Ohio grain farmers.

“If it was one thing you could point to, it'd be a lot easier to handle and easier to know the path forward,” Reynolds said. “I think it's a combination of just a lot of stuff going on nationally and geopolitically. You know, the inability to offload container ships right now is a big deal.

“It's a combination of lots of little things and lots of things in concert with each other — and all of a sudden you find yourself in a situation where there's not just one answer.”

Disruptions to any point of the supply chain — manufacturing, shipping, etc. — have not been limited in impact to that specific point. Likewise, the problems farmers are seeing and anticipating will not only affect farmers.

“We don't want food prices to go up, but we also know that we have to make a living,” Reynolds said. “So hopefully we can figure out that path forward, and it's mutually beneficial to everyone. That's a tough question.”

According to the United Nations Food and Agriculture Organization’s food price index, global prices have risen by more than 3% since July and more than 30% this year.

Other industries rely on agriculture products for their operations. Wheat is also used for ethanol-blended fuel choices and animal feed, for example.

Price of the Central Ohio Farmers Co-op described agriculture as a “silent industry,” in that other parts of society rely on it routinely yet the agriculture industry’s far reach is not often visible.