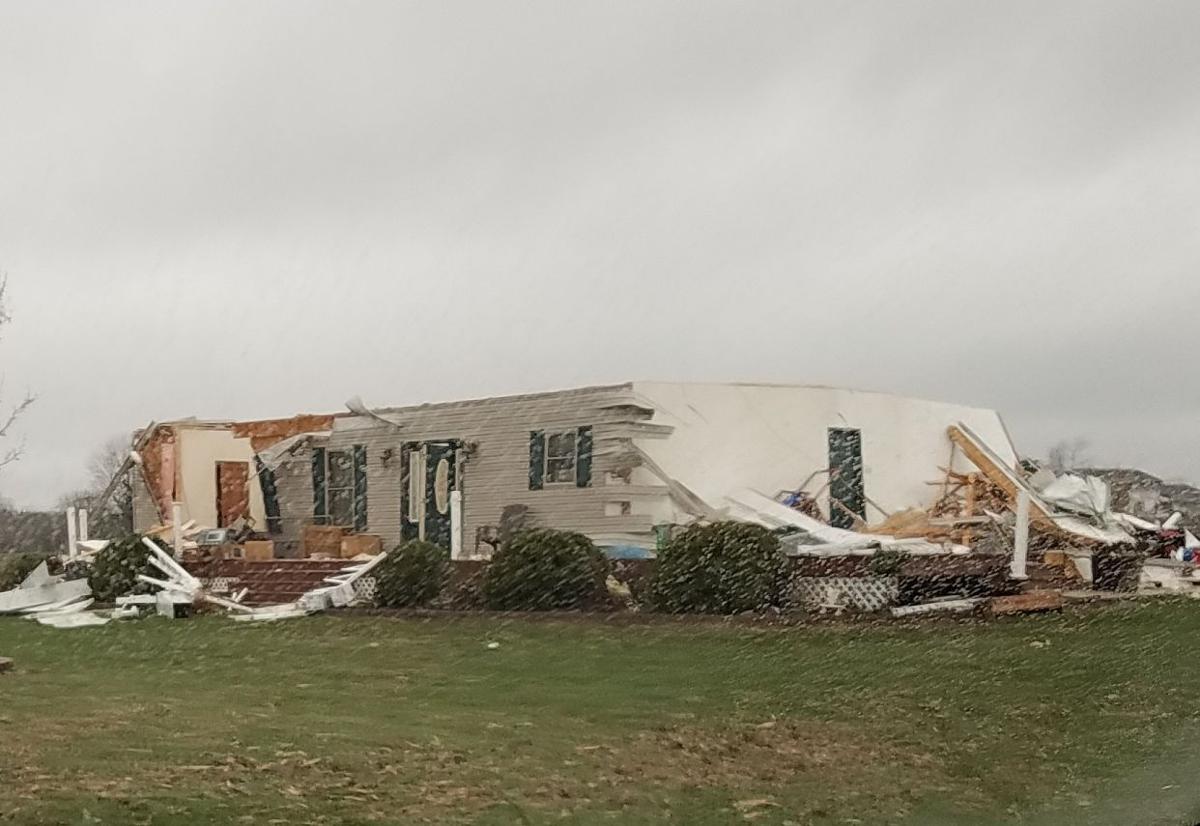 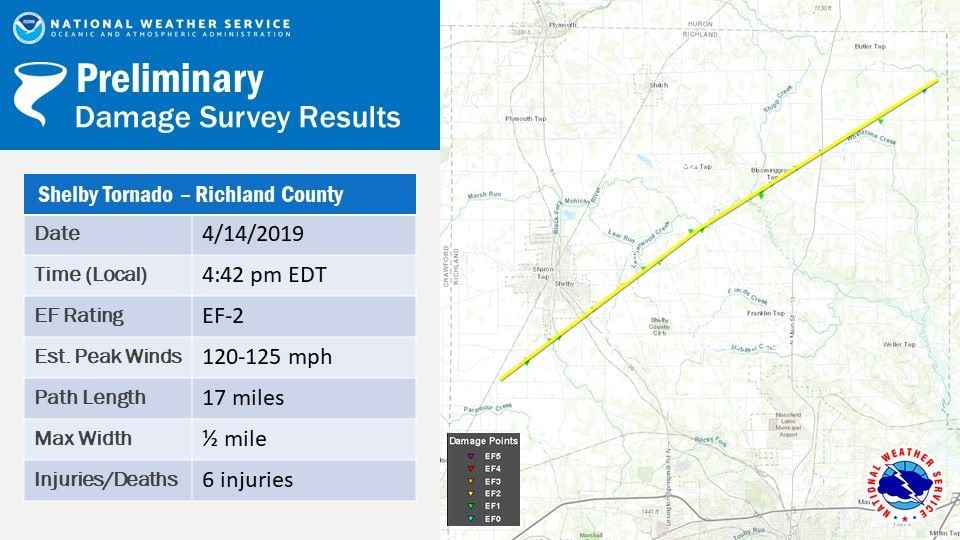 Above is a National Weather Service graphic with preliminary information on the tornado that hit Shelby and other sections of Richland County on Sunday. The NWS said it was a strong tornado, rated an EF-2, with estimated wind speeds of 120-125 miles per hour. The path of the tornado was 17 miles long and up to one-half mile wide, the NWS said.

MANSFIELD -- State assistance will not be coming to those impacted by the April 14 tornado that roared through Shelby and several surrounding townships in northern Richland County.

But that doesn't mean help isn't coming neighbor-to-neighbor, just like it has since that late Sunday afternoon turned from peaceful to violent.

To qualify for state emergency management agency funds after such a storm, the locale must have at least 25 damaged structures and at least 40 percent of the total estimated damage cost must be uninsured.

Richland County EMA Director Rick Evans told Richland County Commissioners on Tuesday that 179 structures were damaged by the storm, but only eight of those were uninsured.

The structures included residences, out-buildings, unattached garages, barns and any other standing structure.

Of the 179 structures damaged in Richland County when the twister packing winds of up to 125 miles an hour touched down, 16 were destroyed, 30 sustained major damage, 26 had minor damage and 107 were affected in some way, Evans said.

Among the eight structures uninsured, one was destroyed, two suffered major damage, three had minor damage and two were affected.

State assistance will also not be available through state Job & Family Services since Gov. Mike DeWine declined to declare the storm-damaged location a disaster area.

Evans and commissioners discussed how residents can donate financially to those in need through Richland County Organizations for Disaster Assistance (CODA), an organization that formed after Shelby and other parts of the county sustained severe flooding in 2007.

An account for the tornado victims has been set up through Mechanics Bank and its branches. Evans said 100 percent of the money donated will go directly to assist the storm victims.

CODA is headed up by Rebecca Owens of the local Catholic Charities office. For more information on how to help, contact First Call 211. Some telephone service providers may not support three digit dialing, but First Call 211 can be reached at this alternate number: 419-522-4636.

Evans and commissioners also discussed the county's tornado siren warning system. Evans said the sirens are tested on the fourth Wednesday of each month at 4 p.m.

The next such test will be Wednesday. Evans asked anyone outside at that time who doesn't hear a siren to contact the local EMA office at 419-774-5686.

LAWN UPDATE: After consulting with local military veterans, commissioners said Tuesday they will be placing three flagpoles on the lawn as part of the overall beautification program -- one for the United States flag, one for the State of Ohio flag and one for the Richland County flag.

Several steel flagpoles currently aligned along the concrete sidewalk from the Richland County Administration Building to Park Avenue East will be removed.

Work on the poles may begin as early as this week, commissioners said, adding that the timeline for the planting of 18 new trees remains on track and should happen in the next two weeks. An additional two new trees will be planted when the new Gold Star Family Memorial is dedicated this fall, commissioners said.

The courthouse lawn beautification program was announced by commissioners on April 9. Some in the community became angry when commissioners decided to remove 12 older trees on the lawn earlier in the month.

SHELBY -- Residents of Shelby, especially the neighbors of Plymouth-Springmill Road, have a soft spot for the Richland County road crew.