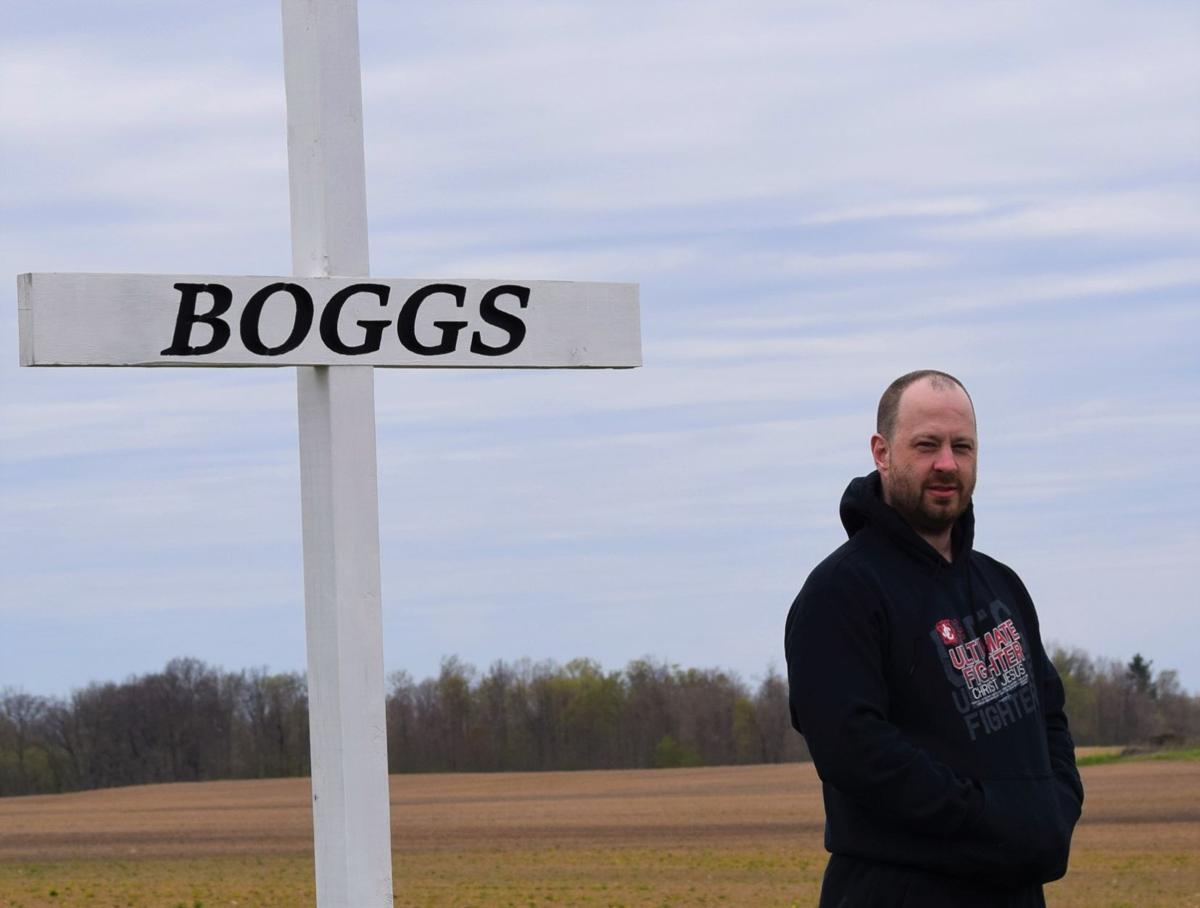 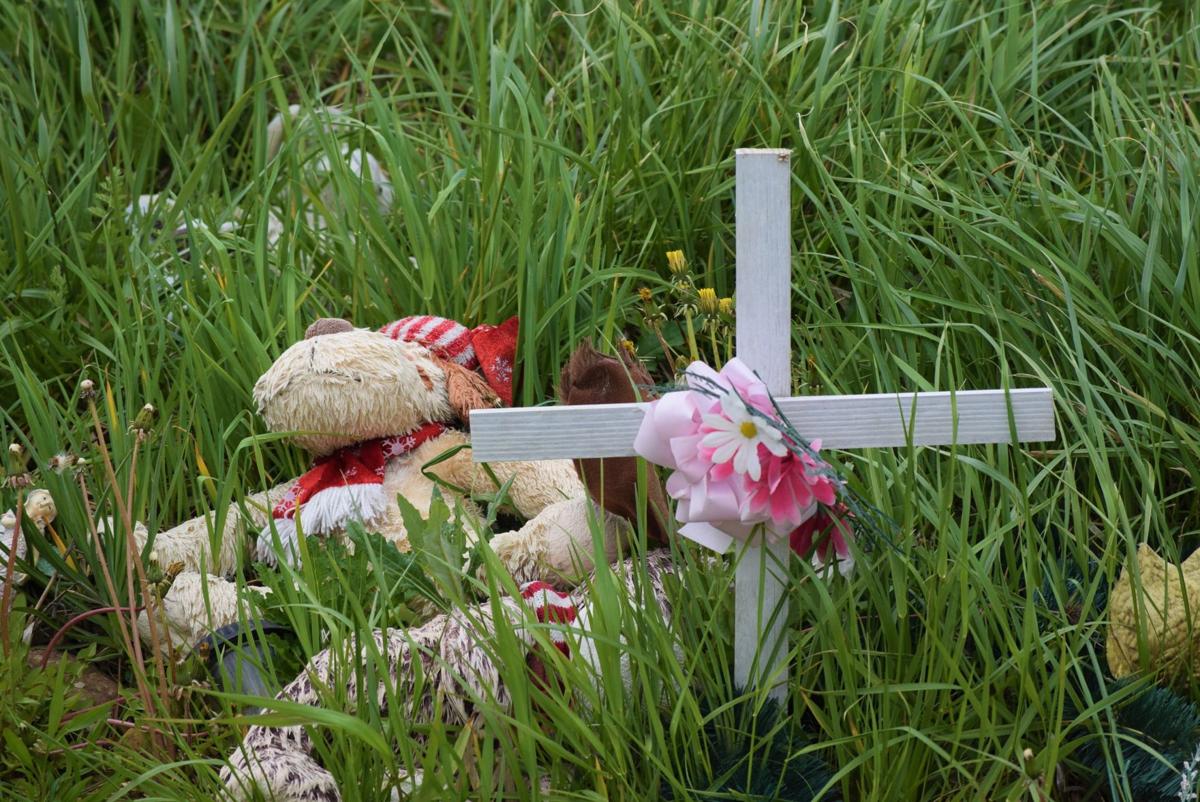 A small cross and stuffed children's animals remain one year after a fatal traffic crash at the intersection of Ohio 96 and Ganges-Five Points Road. 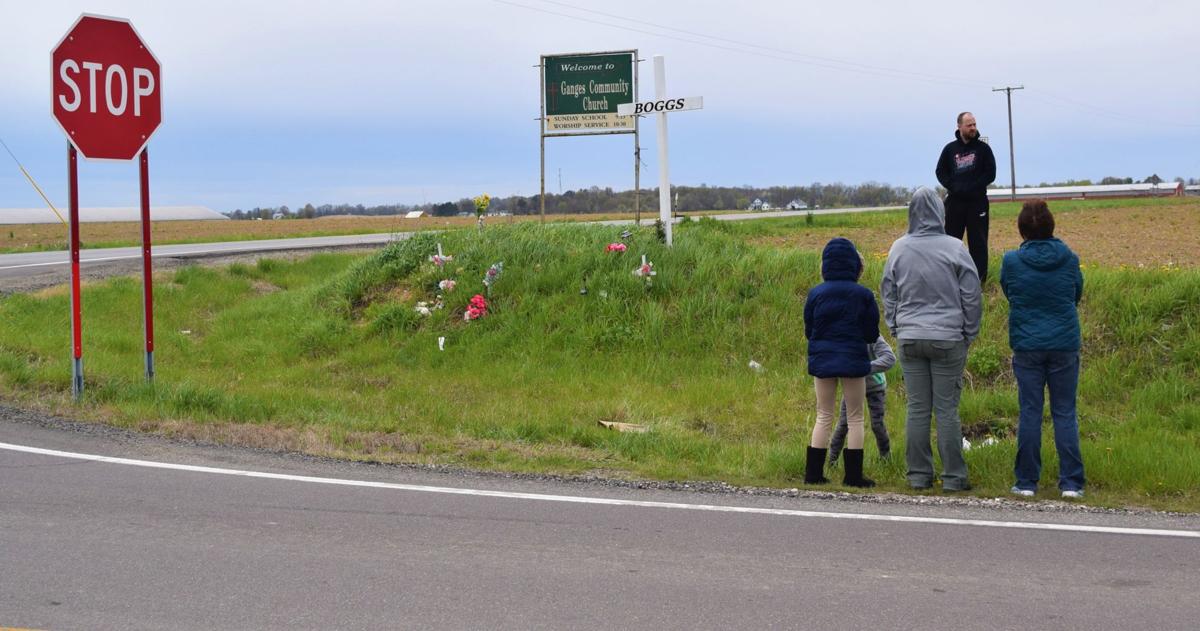 A small group of extended family members gathered Tuesday afternoon with Josh Boggs at the intersection of Ohio 96 and Ganges-Five Points Road. 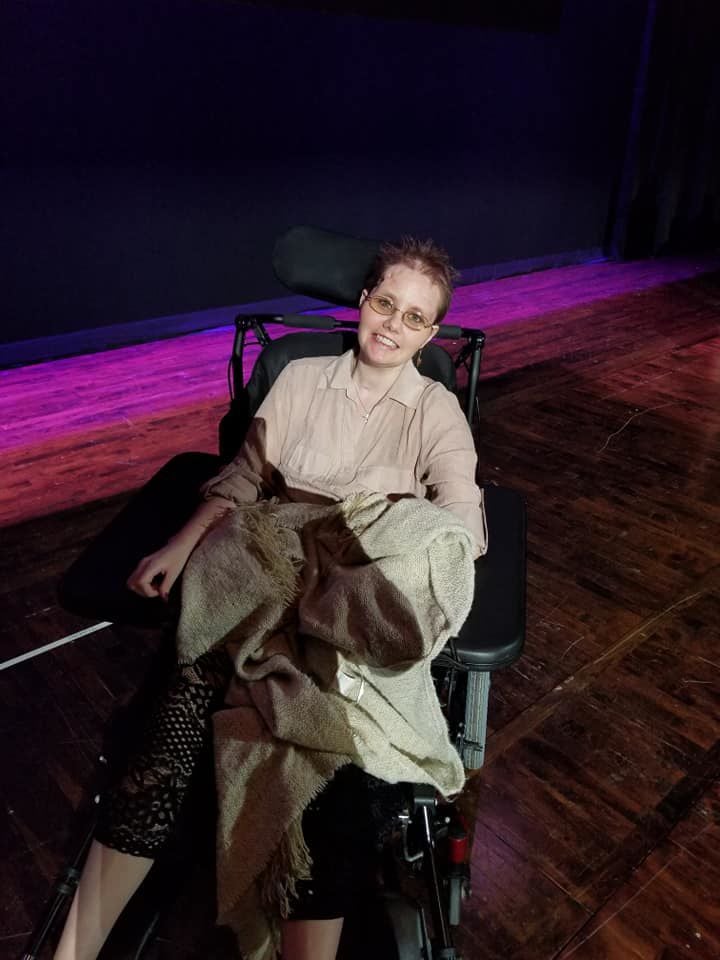 Stacey Boggs underwent another surgery on Tuesday related to brain injuries she sustained in a May 5, 2019, crash at the intersection of Ohio 96 and Ganges-Five Points Road. 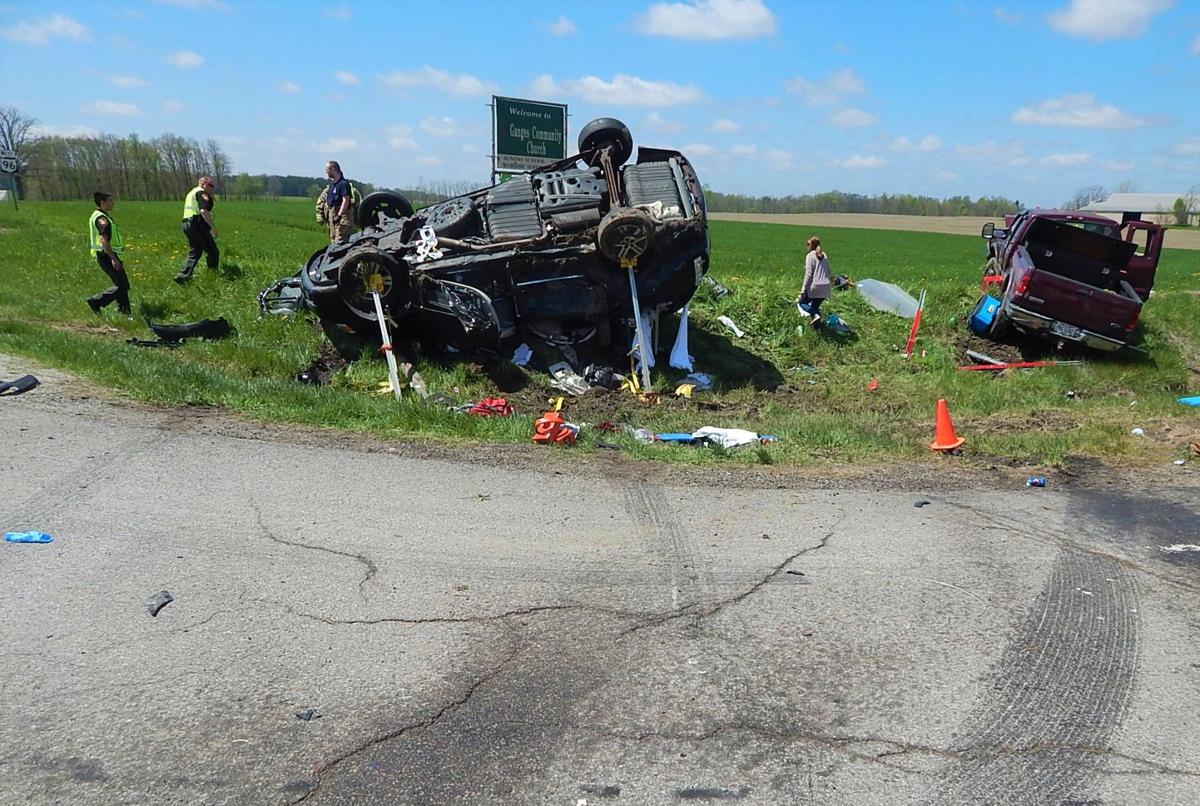 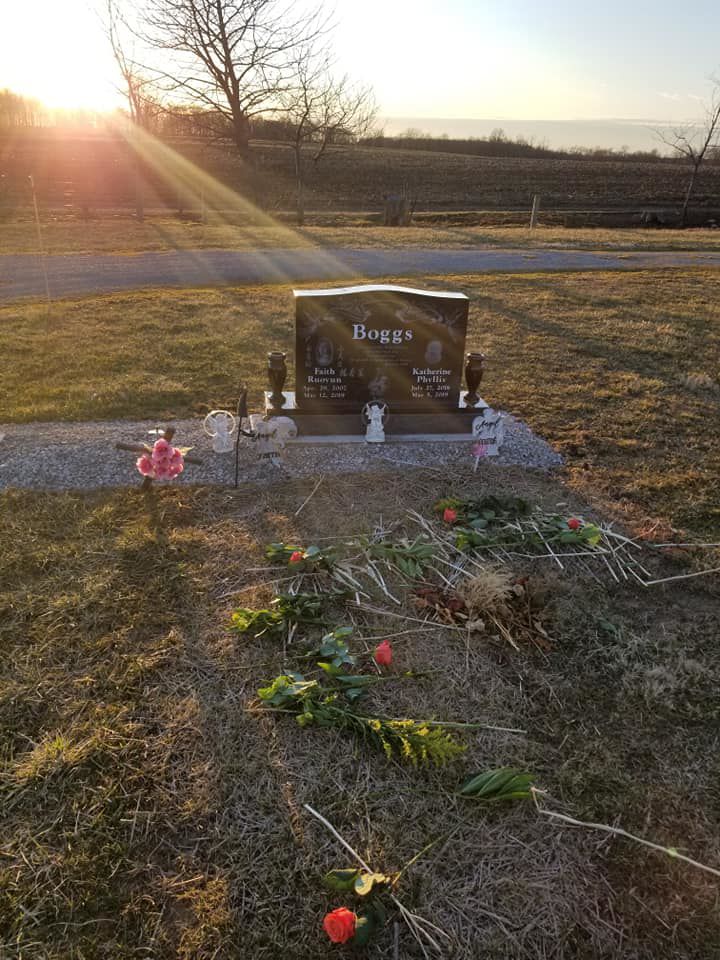 The sun sets in March over the headstone for Faith and Katherine Boggs at the Shenandoah Christian Church cemetery. (Facebook photo by Josh Boggs)

SHELBY -- Josh Boggs stood on a hill Tuesday afternoon, overlooking the scene of a fatal accident that took so much from his life.

And he expressed gratitude one year later.

It was 1:26 p.m. on May 5, 2019, that a fatal crash killed three of his children (one unborn), injured he and his son, Bruce, and left his wife with a brain injury she is still battling to overcome.

"I just want to thank the community," the 43-year-old Shelby man said. "It's amazing how people stepped up and been helpful and worried about us. It's like I tell Bruce ... be grateful. Show you're grateful.

"Don't be the person who just say 'thanks' and walks away."

Boggs certainly has not walked away, returning on a cloudy, windy day to the crash scene at the intersection of Ohio 96 and Ganges-Five Points Road in rural, northern Richland County.

"I can't believe it's been a year," Boggs said. "You know, a lot of things have come full circle."

THE CRASH: The accident occurred after Boggs and his family attended a Sunday church service and were westbound in a minivan on Ohio 96 on a clear, bright sunny day.

A Ford F-350 pickup truck, driven northbound by Matthew McBride Jr., 25, on Ganges-Five Points, blew through a stop sign and slammed into the van, according to the Mansfield Post of the Ohio State Highway Patrol.

Both vehicles came to rest on the northwest side of the intersection. A detailed crash investigation report done by the OSHP, a document as thick as the phone book of a small city, has never really provided answers.

McBride was indicted Jan. 13 on more than two dozen counts, ranging from aggravated vehicular homicide to operating a motor vehicle under the influence of drugs or alcohol. The New London man was booked into the Richland County Jail and bond was set at $100,000.

The COVID-19 pandemic has temporarily halted the legal proceedings against McBride, who has pleaded not guilty to the charges in Richland County Common Pleas Court.

THE AFTERMATH: Boggs vowed in the days and weeks after the crash to make sure no one was injured at the intersection again.

His 10-month-old daughter, Katherine, was pronounced dead at the scene. Her sister, Faith 12, was taken by medical helicopter to Nationwide Children's Hospital in Columbus, but never recovered and was pronounced brain dead exactly one week after the accident.

Stacey Boggs, 35, who was driving at the time of the crash, underwent brain surgery at OhioHealth Mansfield Hospital, losing the couple's unborn child.

Bruce Boggs, 15, lost teeth and also bruised his spine and has undergone physical therapy for his left leg.

Josh Boggs, who works for MTD Products in Willard, lived up to his vow after sustaining a fractured skull, chipped vertebra and 30 to 40 stitches in his head from crash injuries.

He successfully lobbied local and state elected officials, as well as the Ohio Department of Transportation, to install "rumble" strips on Ganges-Five Points both north and south of the intersection with Ohio 96.

The work was done just about a month after the crash.

"All the people who said, 'Sure, it's great in principle' and 'Sure, they say they're going to do it' ... well, they are breaking ground and it's gonna happen. If we show people the end product, I think this will translate into other intersections getting fixed," Boggs said June 12.

"We just have to show if that we don't fight and we just work together, I think people are quite willing to keep doing this where it needs to be done. In spite of the tragedy, this is a huge victory for all of us," Boggs said.

THE FUTURE: Boggs was idled from his work in March during the early stages on the pandemic in Ohio. He has since returned to work. His son has recovered and the lanky young man was preparing for track season when schools were ordered closed and spring sports cancelled.

What's still uncertain, in addition to the legal case against McBride, is the recovery of Stacey Boggs.

She had recovered to the point last summer that she was released to a long-term care facility. She was speaking and even attended an awards ceremony in Columbus in October for the OhioHealth Mansfield Hospital team that treated the family after the crash.

In late January, Josh Boggs said, Stacey began complaining of headaches. She was readmitted to the OhioHealth Mansfield Hospital for surgery (she has two shunts to relieve fluid on her brain) and remains in a coma-like state a few months later.

"The (doctors) don't really know. They don't know why," said Boggs, whose eyes light up when he speaks of his wife. "It's the human brain. It's complicated."

Stacey Boggs underwent yet another surgical procedure Tuesday. The good news is Josh Boggs was able to be in the same room with his wife for the first time since the pandemic began and hospitals were closed to visitors.

"They let you in on the day of a surgery. I was able to see her, talk to her, pray with her. They have to replace a shunt (today), but once the neurologist gets in there, he will see what further damage there is," Boggs said. "I mean, the fact she lived (through the crash) is incredible, a miracle. She is still here."