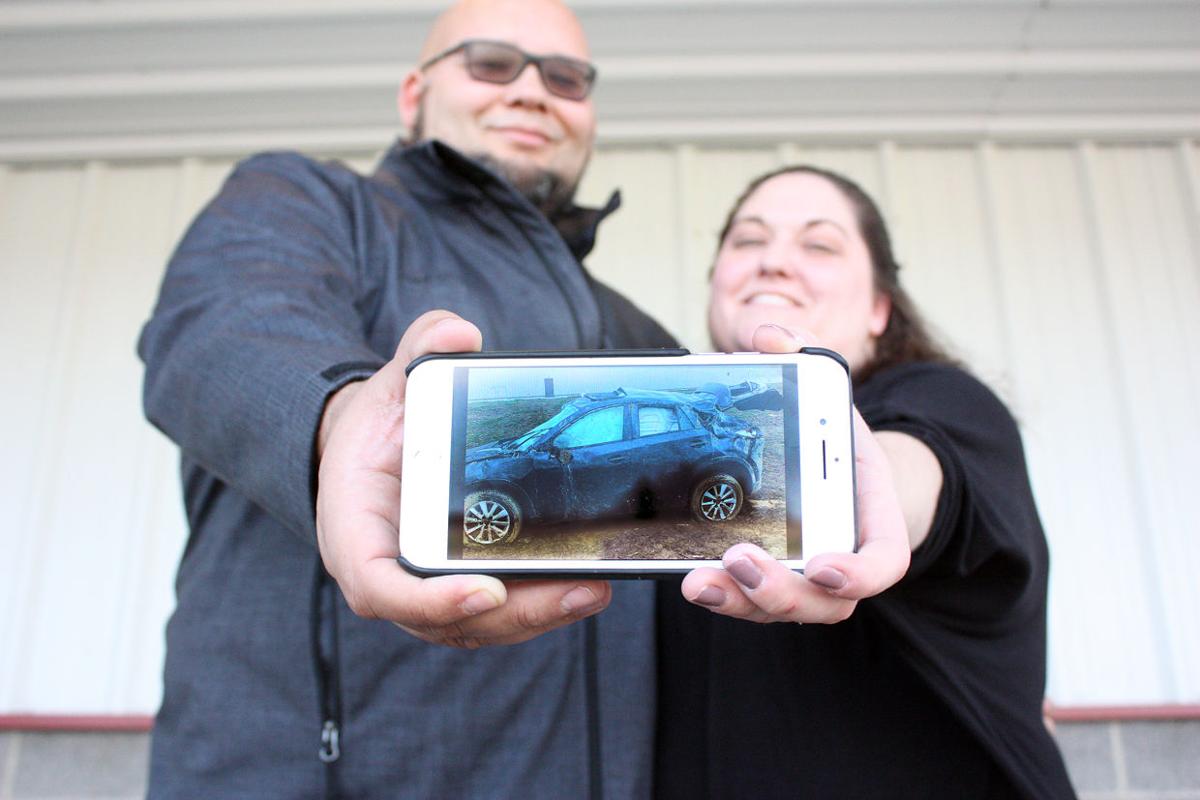 Shelby residents Russell and Kelly Cushman were driving along Technology Parkway on Sunday when the tornado hit, lifting their car into the air and flipping multiple times before landing. The couple escaped with only minor injuries. 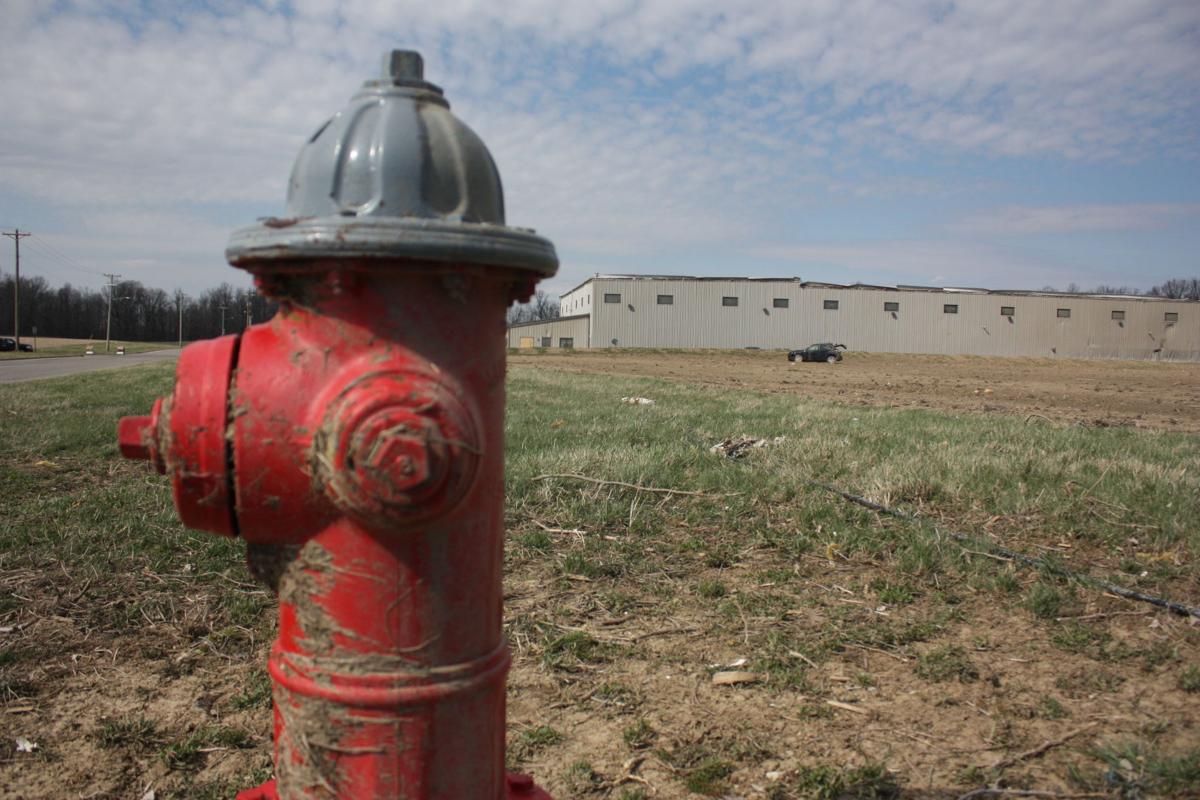 According to Kelly Cushman, this red fire hydrant on Technology Parkway is where the tornado first lifted their car. In the distance is where their car landed. 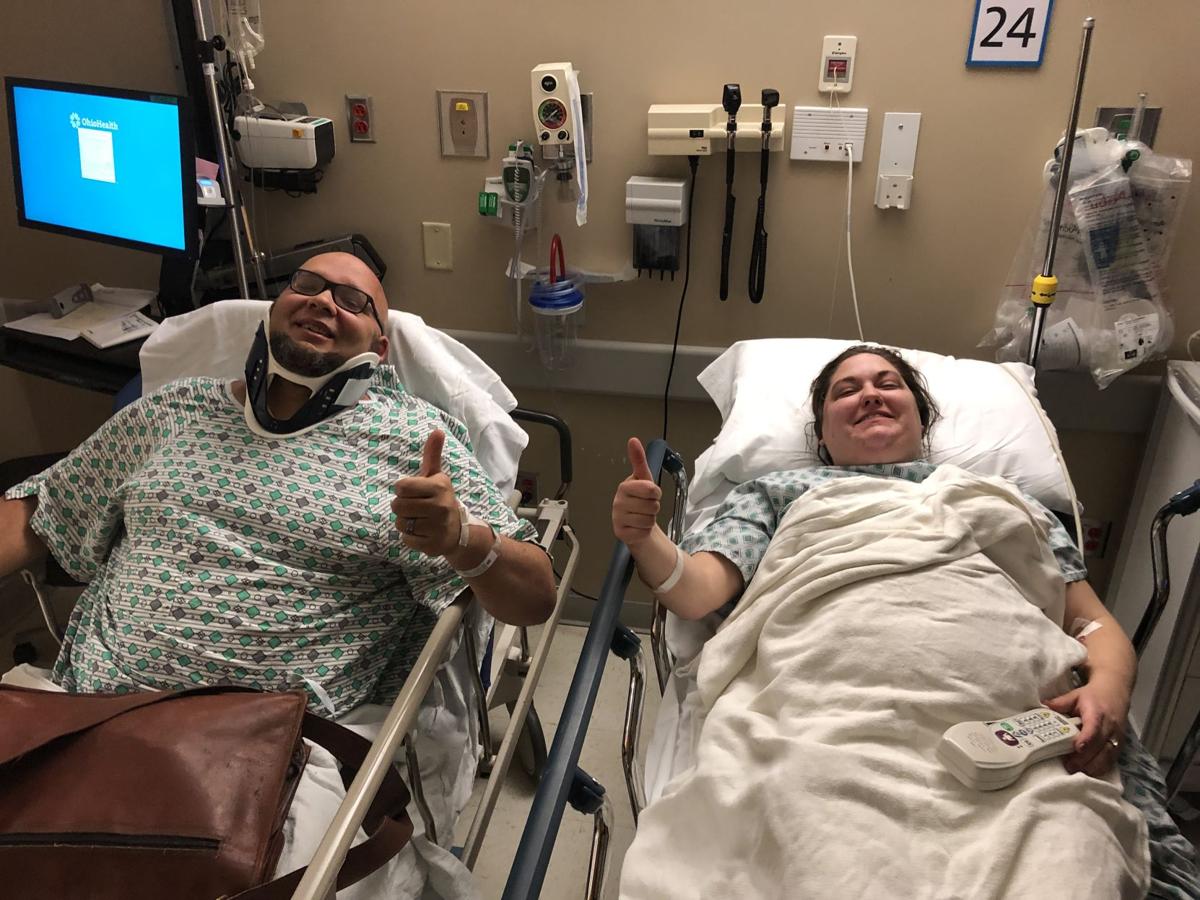 Russell and Kelly Cushman were in good spirits at the hospital, where their injuries from the tornado were assessed and they were released later that same day.

SHELBY – Russell and Kelly Cushman are no strangers to severe weather.

As natives of South Carolina, they've survived floods and hurricanes. The day they moved to Shelby in February was in the middle of the polar vortex.

But they had never experienced a tornado until Sunday. And when they did, it was a little too close for comfort.

"People keep saying, so you were near a tornado? And I'm like no, not exactly," Kelly said. "We were in it." 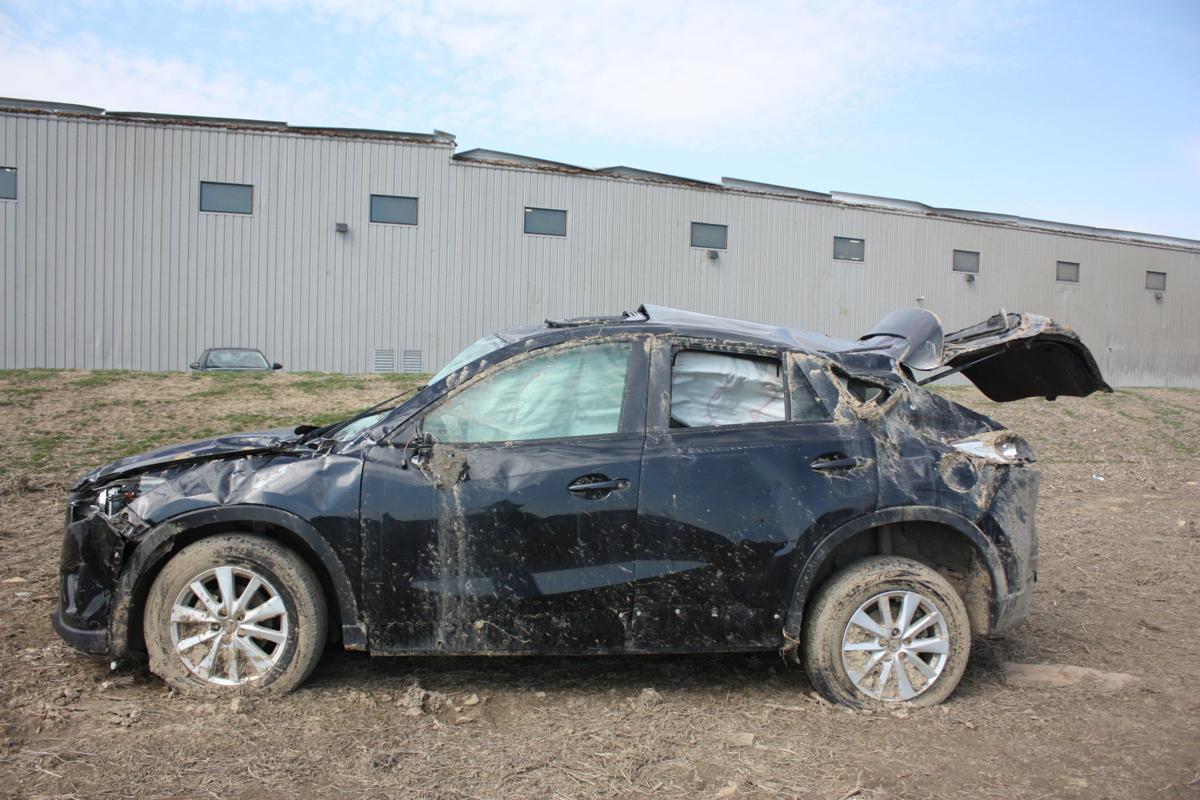 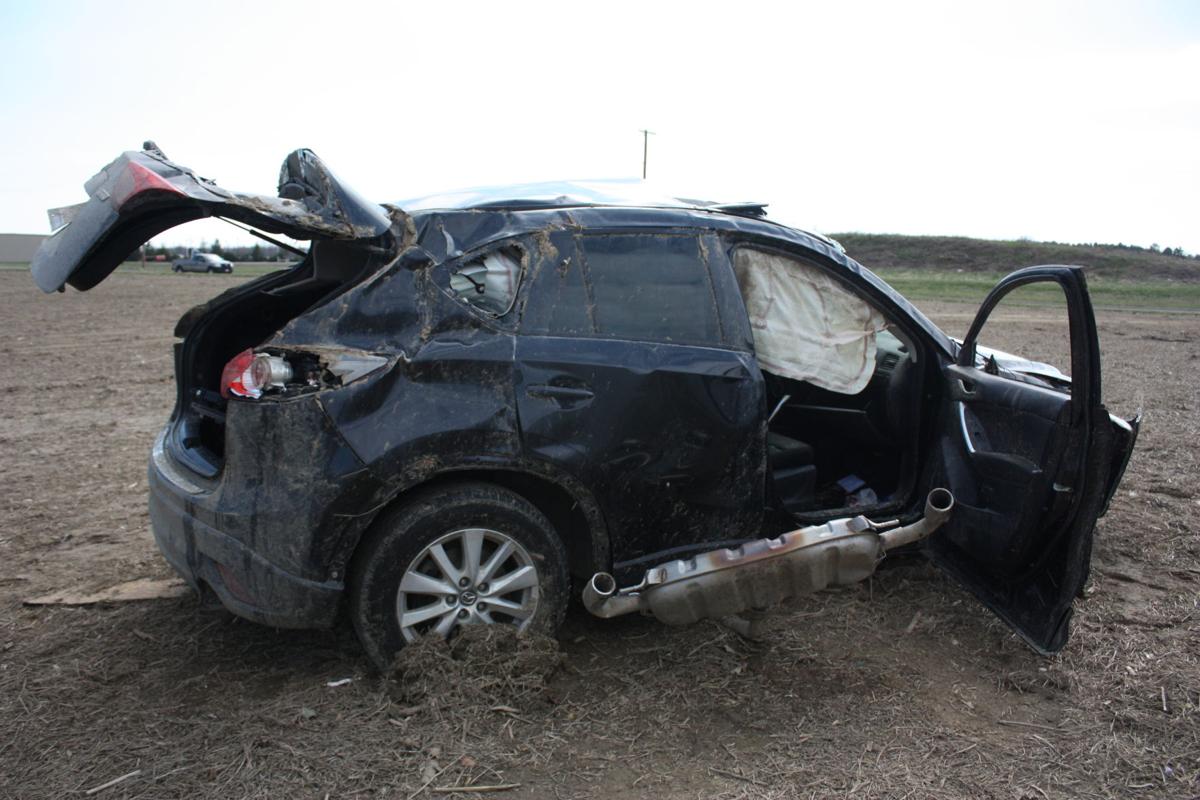 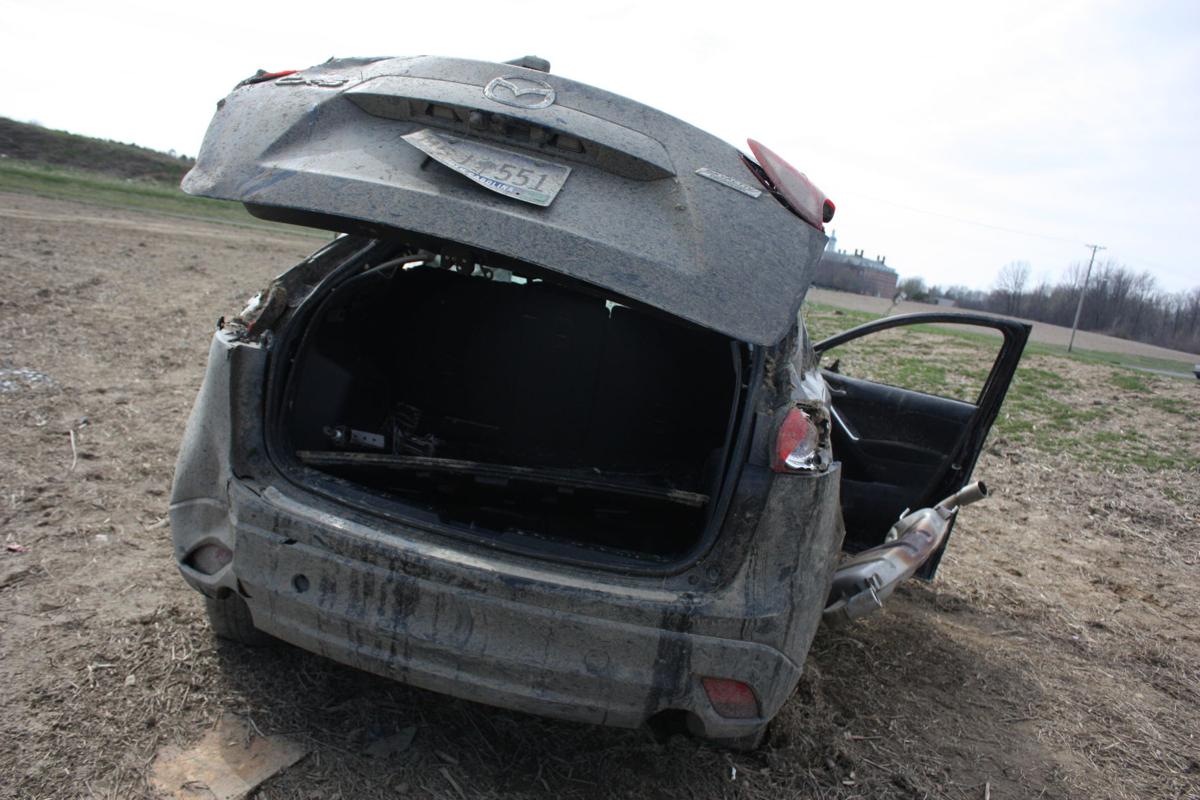 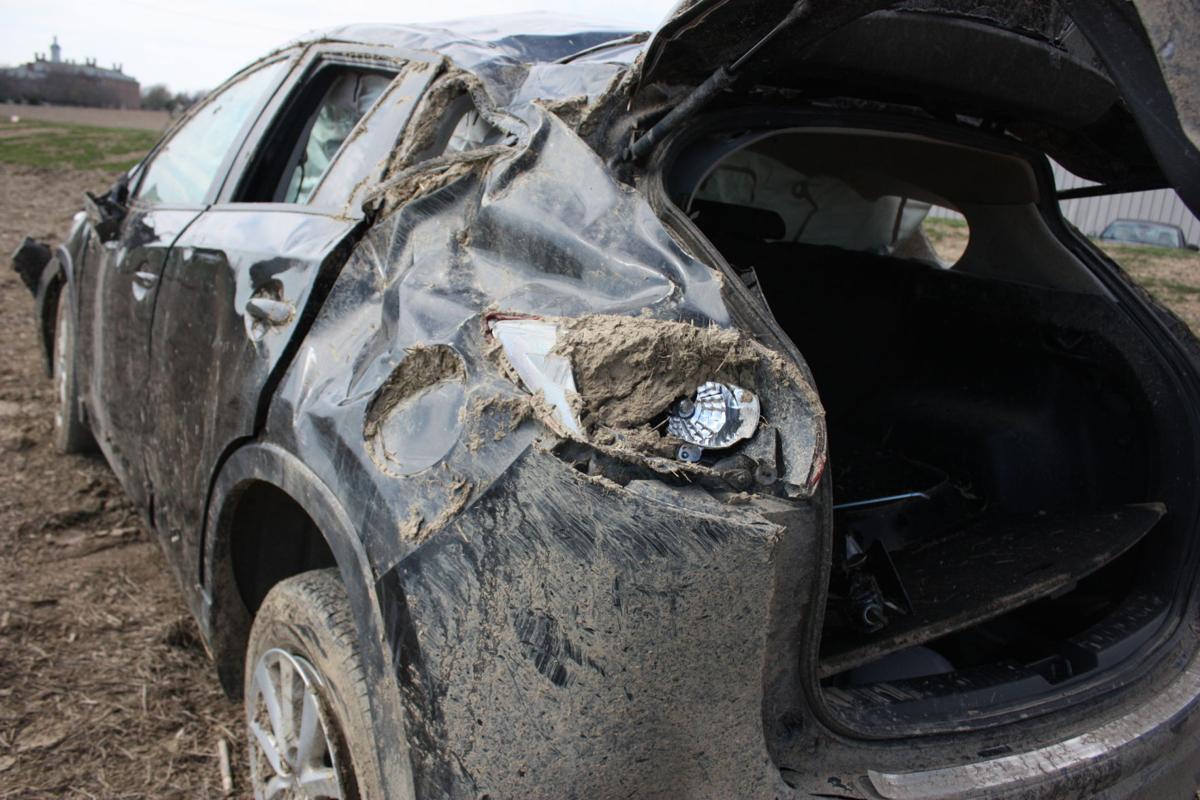 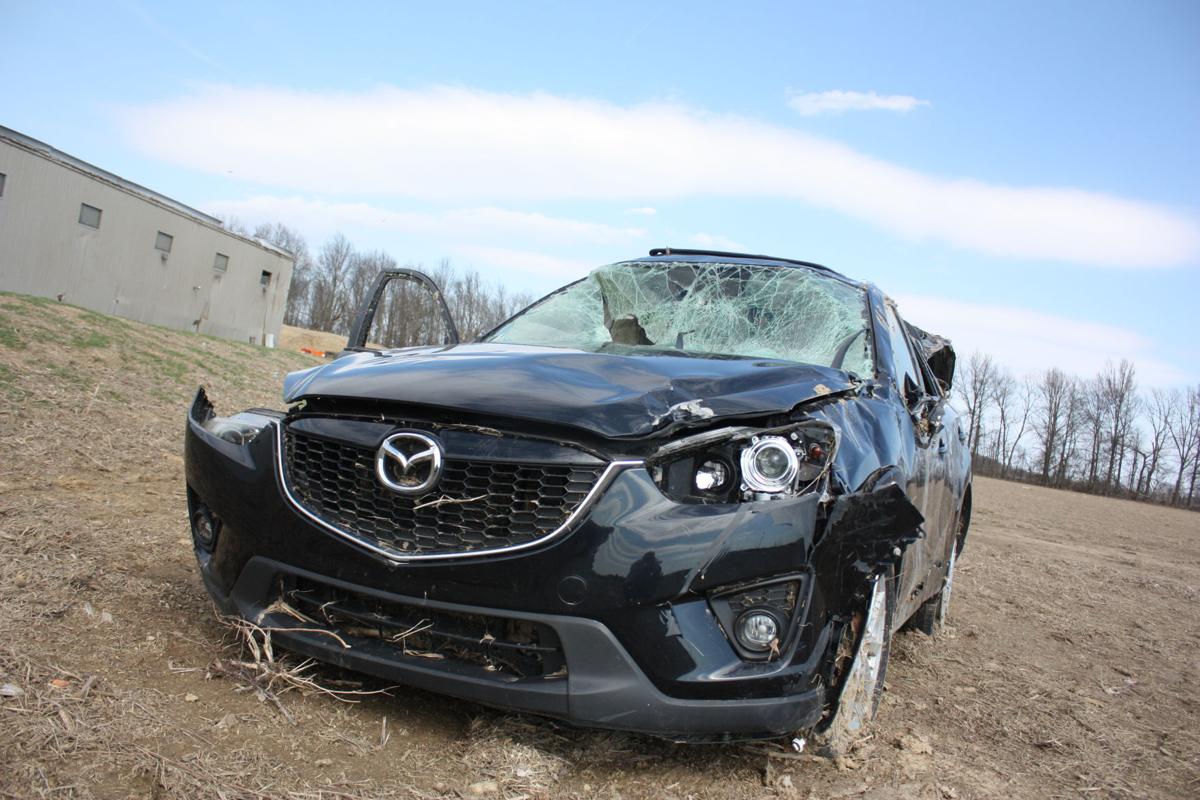 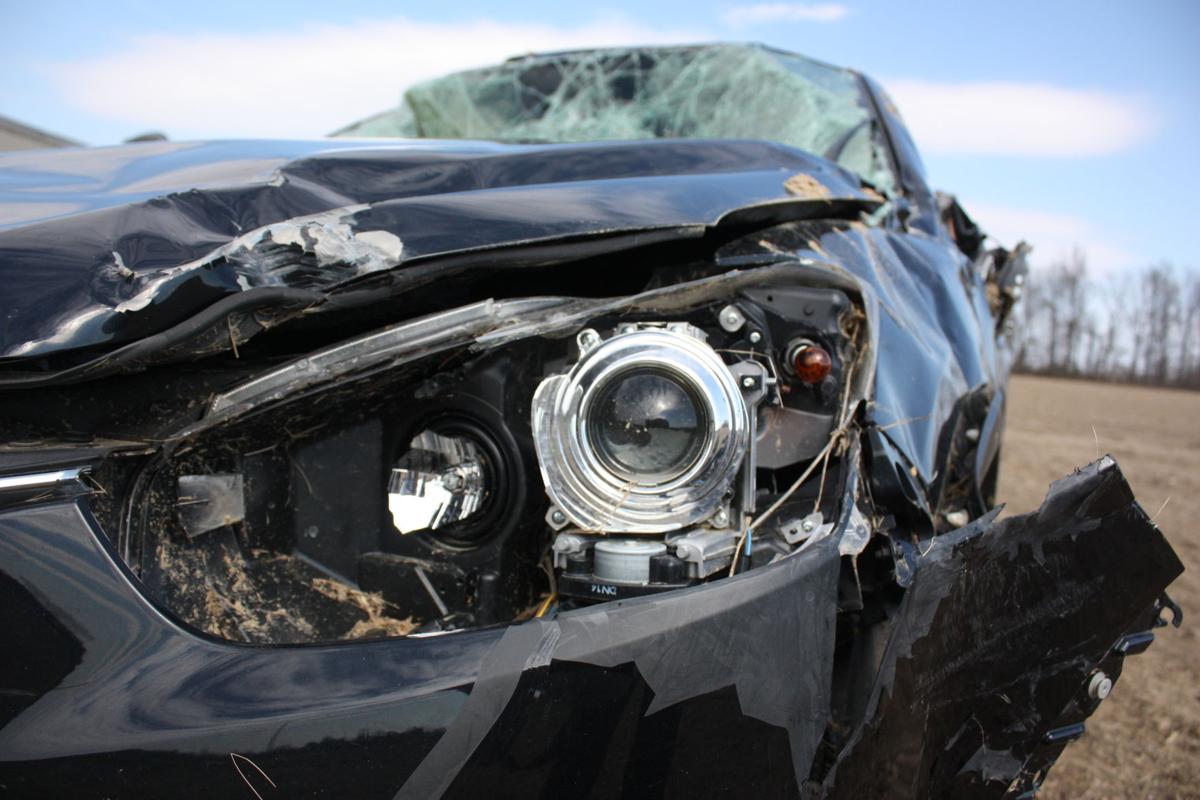 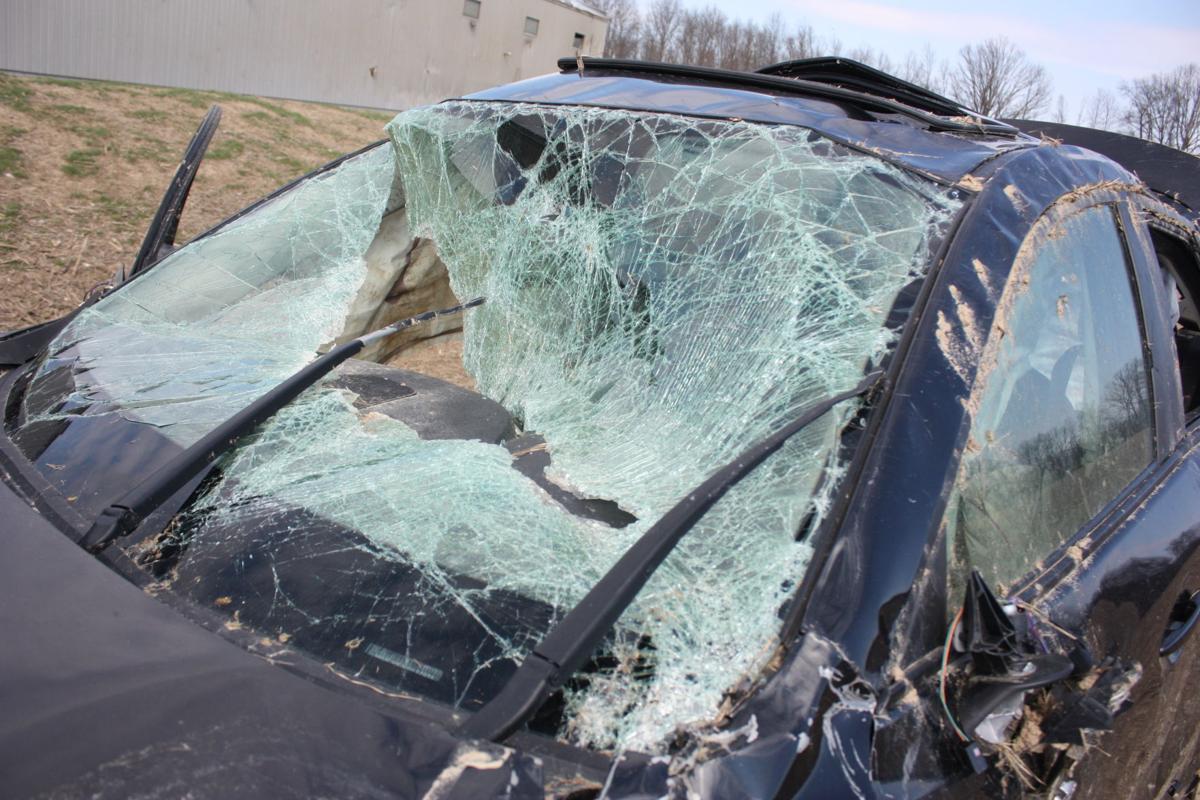 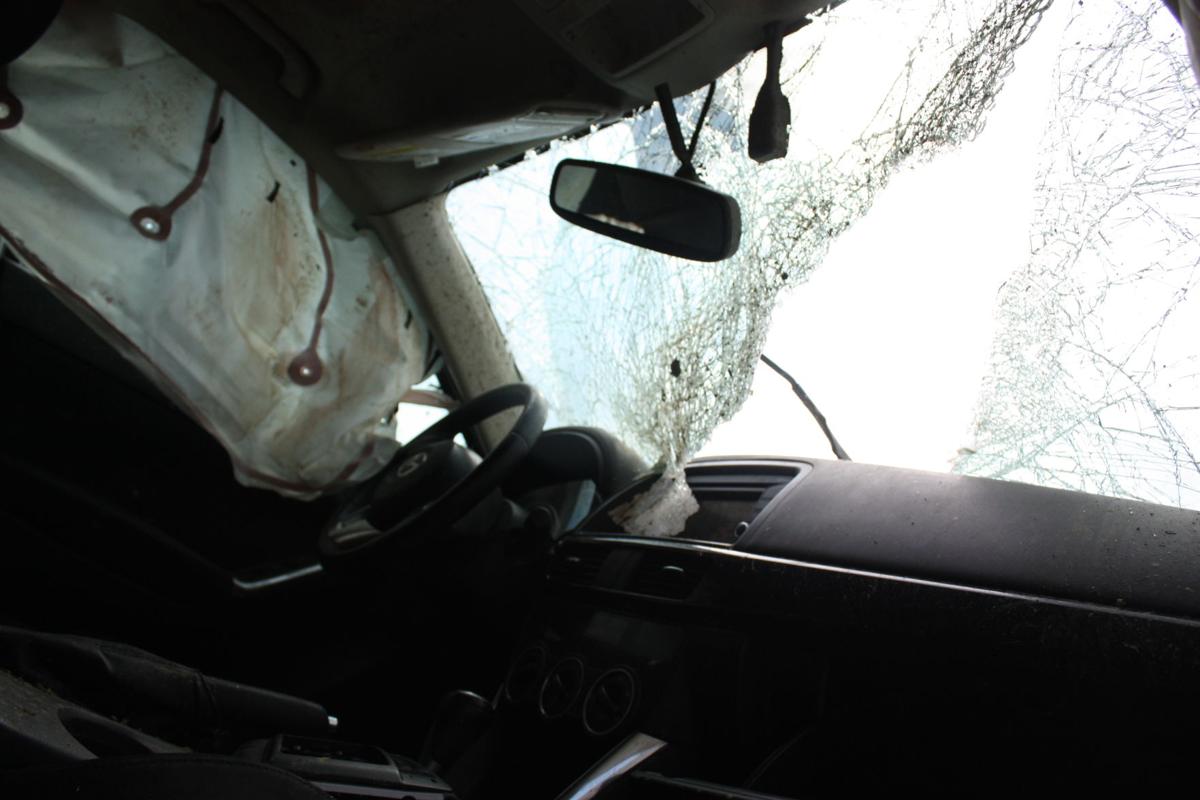 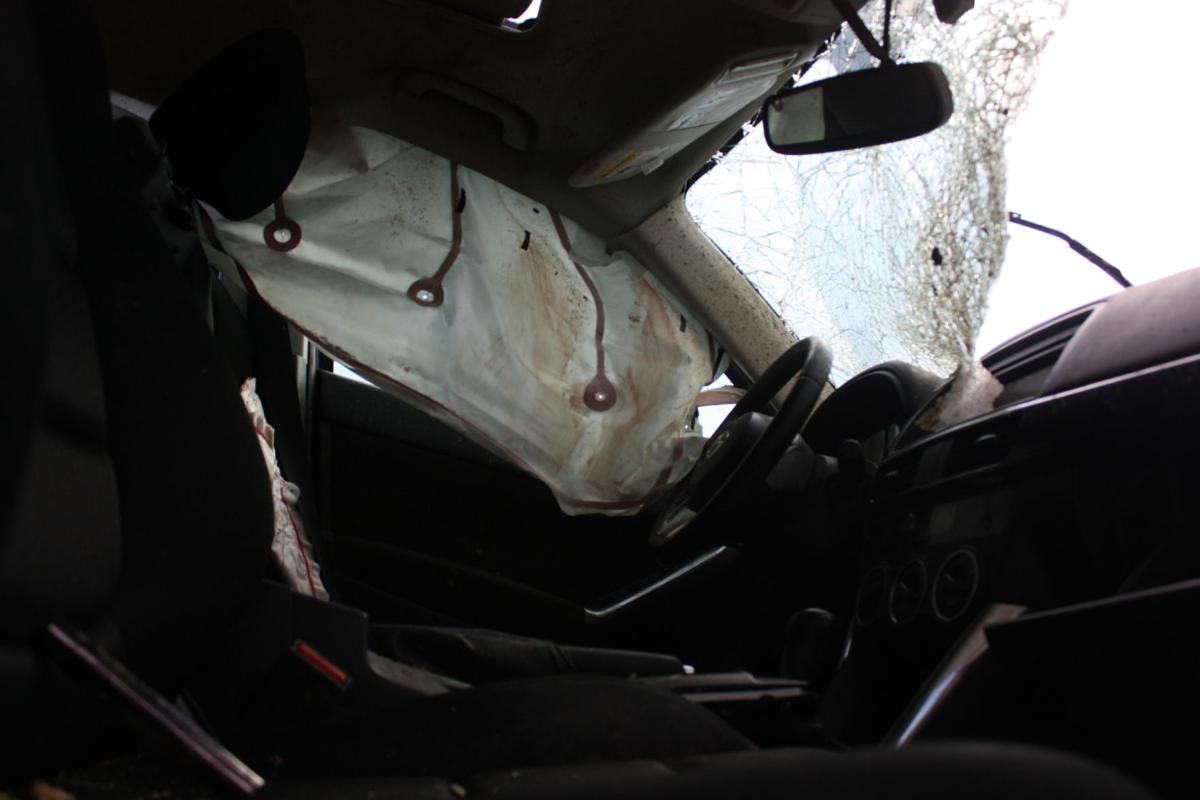 Sunday for the Cushmans started at church, where Russell serves as the family life pastor at Core Community Church, on the corner of State Route 96 and Technology Parkway. The couple enjoyed lunch at Paul's Drive In, then headed to Five Below in Ontario to gather supplies for a youth group event later that day. They started the drive back to Shelby at approximately 4:30 p.m.

"Then I get the beeping for the tornado warning," Russell recalled.

Not being used to tornadoes, they called lead pastor Ben Carver from Core Community Church to ask which was more severe, a watch or a warning? Then they turned onto Technology Parkway to head to the church for shelter.

That's when Kelly noticed dust, dirt and mud flying in the wind.

"When you power wash a driveway, the way the water turns to mud and moves ... it's kind of weird, like a sheet of water," she said. "That's the way I've been describing it."

Instinctively, Russell told Kelly to crouch down and put her arms over her head. Right after that, a sign and pieces of a billboard flew over their heads.

"And then, whoosh. We get caught up," Russell said. "We were completely airborne."

Russell, 34, and Kelly, 28, first met in church about 10 years ago in Columbia, South Carolina. According to Russell, it took a while for each of them to realize the feelings between them were more than friendship. Fast forward to now, the couple will celebrate their third wedding anniversary next month.

Russell received his first full-time assignment as a youth pastor shortly after he started dating Kelly. Prior to that, he was interning at a large mega-church in South Carolina. That experience led him to ministry school, where he will graduate next month.

In the meantime, he worked odd jobs in the business world to make money and focus on school.

"My day-to-day was pretty soulless, then at night I got to work on something much more fulfilling," he said. "I don't think I could've gotten through it without Kelly. I thought I should keep doing soulless work because at least it pays, but Kelly kept saying the right job was going to come around."

Then one day around Thanksgiving, Russell received a call from Ben Carver at Core Community Church. They were in need of a family life pastor.

It seemed like a perfect fit. And Kelly's family had just moved to Chagrin Falls, only a few hours away from their new hometown of Shelby.

"It was definitely a God thing," Kelly said.

Russell described flying midair through the tornado as being in a gyroscope - a device consisting of a wheel or disk mounted so it can spin rapidly on an axis.

His first-responder training told him to stay as keen to the details of a trauma as possible, to avoid going into shock. He decided to focus on counting the number of times their black Mazda CX5 flipped through the air. He lost count at four.

"We're spinning long enough to be thinking about it," Russell said. "At one point, Kelly is eating her knees and I look out and see that our windshield is bashed in, and through the cracks I can see the ground. That's when I put my hand over Kelly and put my head down holding onto the steering wheel, and I thanked God that I'm 280 pounds because I'm braced in. This was Cedar Point on steroids."

Russell had a vague awareness that Kelly was screaming, but couldn't make out what she was saying.

At that point, Kelly didn't know what she was saying, either.

"If you ask me now, I don't remember anything that came out of my mouth, but I can hear the thoughts in my head," she said. "And I'm thinking, I just want the car to stop moving. Literally, you feel like a rag doll."

Neither Kelly nor Russell could recall just how long the car was in the air, flipping over and over and spinning simultaneously. They just knew it felt like an eternity.

"At that point, I am almost positive we're going to die," Russell said.

"There was this tunnel effect - you hear the deafening wind around you, but I could hear him clear as we're talking right now," Kelly said. "I could hear everything he was saying, he was telling me it was going to be OK, and I knew that if he was still talking and I could still hear him, we weren't dead yet."

Suddenly, the car met the ground nearly 100 yards away from where it first went airborne. A phone call from Carver came through the car's bluetooth system, and Russell yelled to call 911. Then the fight-or-flight response kicked in.

"As soon as we hit the ground, we weren't afraid anymore," Russell said. "We just knew we needed to get out of the car."

The Cushmans ran to Lloyd Rebar Company for shelter, only a few yards away from their landing spot at 139 Technology Parkway. Meanwhile, a man in a truck named Josh - now known as a guardian angel to the Cushmans - skidded to a stop along the road to offer his help.

"And I thought oh, that's the kind of town Shelby is," Russell said.

The front window of the Mazda was shattered. The headlights were smashed. The sheer force of the wind twisted the undercarriage exhaust of the car entirely to the right. And yet, Russell was able to recover his laptop bag and glasses.

"It was terrifying, and then it was exhilarating to come face-to-face with what you really think you're not going to walk away from, and not only not have any major injuries but go home that night," Russell said. "We were amazingly in awe of being protected and surviving.

"On Monday I woke up not afraid of half the things I was afraid of on Sunday."

There's a saying where Russell was raised: "Death, where is your sting?" It's derived from 1 Corinthians 15:55-57, "O death, where is thy sting?" In other words, through faith in God, death is no longer a stinging punishment, but the victorious entry into eternal life.

With Easter only a week removed from their near-death experience, Russell has been reflecting on that saying a lot since the tornado. Easter services (at 9 and 11 a.m. at Core Community Church) will celebrate the resurrection, where death loses its sting.

"When we were face-to-face with death - and I'm probably a poor pastor because I'm rather cynical - but when I thought we were going to die, I was convinced this was not going to go well," Russell said. "I was doing whatever I could to make sure Kelly made it. But I did have peace in knowing where we would be and knowing how we lived our lives.

"We lived a life full of friends and family, and purpose, and fulfillment. I couldn't despair in that moment; I wasn't excited, but I didn't despair."

Kelly reflected that a solid belief in her faith helped ground her in a moment completely out of her control.

"Having the confidence and the understanding of believing in something much bigger than myself and knowing I am saved and taken care of by God ... sure I was scared, but death wasn't my first thought," she said. "I thought, no matter how this ends, I'll be OK.

"We've spent a lot of time in the last 48 hours reveling in God's protection," she said. "I clung to that in that moment."

A self-proclaimed cynic, the experience has changed Russell's outlook.

"It's really easy to be negative about things that happen in our community or in our country, but if death has no sting then what else is there? It's making quite the optimist out of me," he said.

Both Kelly and Russell are a bit sore, to be expected after being tossed around in a tornado. Kelly has seatbelt rash on her neck, a few scratches on her arm from broken glass, and back pain. Russell has a small cut on his head.

"When I came out of the car, what everyone saw was a wild-eyed Samoan man with blood streaked all over my face," he said with a laugh.

But the couple came out of the experience relatively unscathed. Still in a bit of shock, yes, but no major injuries.

"We never saw the tornado coming, we were just in it," Russell said. "I'm thankful for that, because if we had been face-to-face and saw it, we would've been terrified."

In the days following, the Cushmans said they have been overwhelmed with support from Shelby, especially their church community. It's a genuine kindness they haven't experienced before, even living in the south.

"Southern hospitality is a real thing, but it's not a genuine thing. Midwestern nice is a real thing," Russell said. "I don't want to sound flippant, but it was a relatively small percentage of the town that was impacted directly by the storm, and everyone in the town still stepped up. That's not as normal or as common as people would like to think."

"Just watching from the people coming together to help with people whose homes have been destroyed, to so many people offering to bring us meals, it has been overwhelming and such a blessing to see that," Kelly added.

Many people have asked whether this experience means they're ready to turn right back around and head for South Carolina. But even a tornado isn't enough to scare the Cushmans.

"We were spared, so I think that means we're in Shelby for life," Russell said.

Time and again, the citizens of Shelby have proven their ability to support each other in times of tragedy. That philosophy came into focus again on Tuesday night when residents rallied to help clean up in the wake of Sunday's tornado.