But the businessman-turned-veteran lawmaker knows the general assembly is a long way from AWFUL.

AWFUL is the acronym for his proposed Average Wage Fully Uniform Law, a bill the Ontario Republican is co-sponsoring with state Rep. John Becker, a Republican from Clermont County in southwest Ohio. 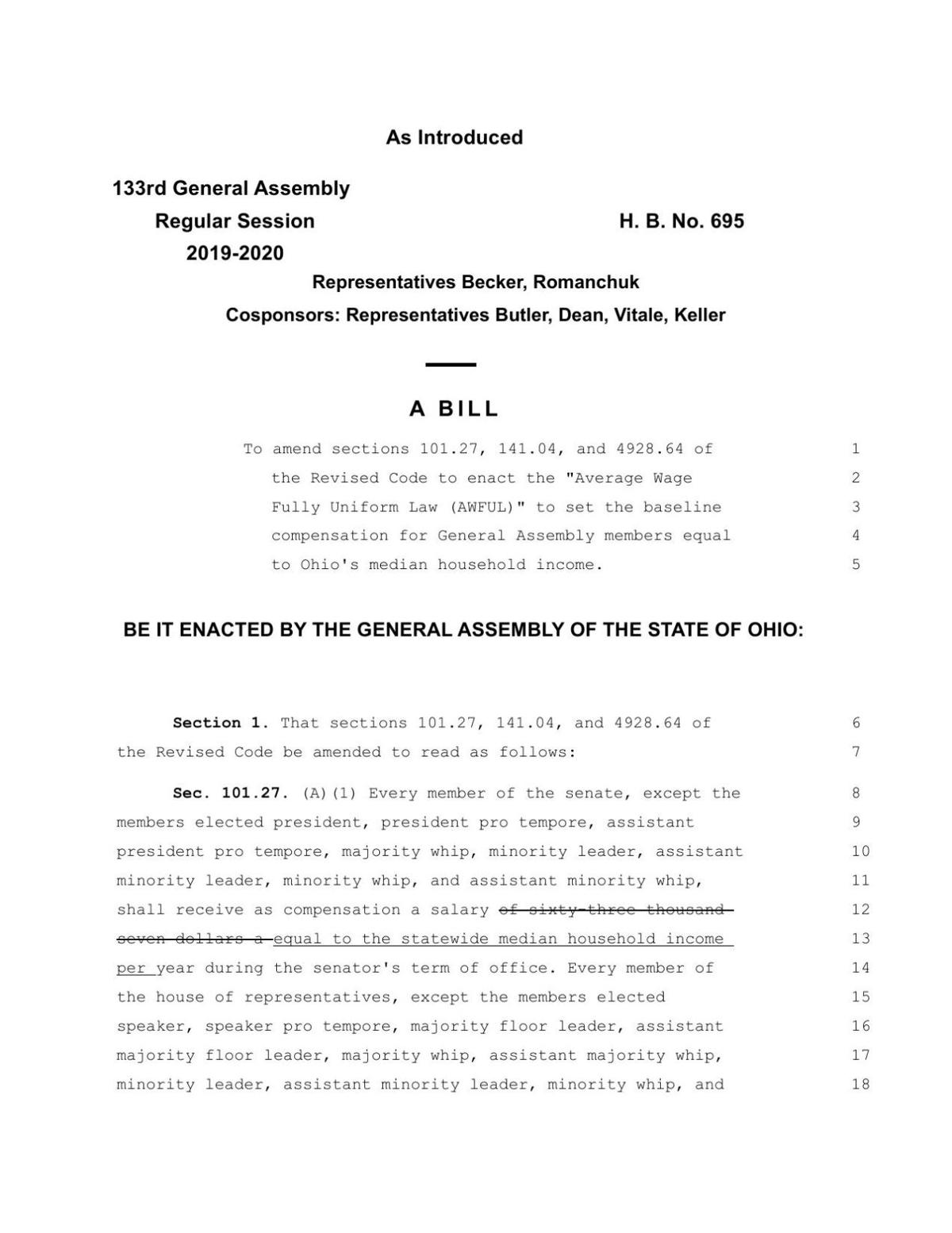 It would mean a pay cut for the state's lawmakers, especially given the ecomomic impact of the coronavirus impact in 2020, including a state-ordered shutdown of the state's economy in March.

The two legislators introduced AWFUL on June 8 and it was assigned to the House State and Local Government Committee. The first step in the legislative process would be sponsor testimony, though that hasn't been scheduled, which comes as no surprise to Romanchuk.

"That committee has a lot of bills in it right now. Plus, it would cut every legislator's pay, so I suspect they are not in a hurry," Romanchuk said Monday.

The bill has gained traction among the leadership of the Ohio House. Speaker Pro Tempore Jim Butler (R-Oakwood) signed on as the first co-sponsor.

Romanchuk, who is on the November ballot as the Republican candidate for the state Senate, said his goals behind the legislation are two-fold.

"First, it will help the state balance the budget. We are epecting a $2.4 billion hole in the next fiscal year budget,"which begins July 1, he said. The bill, even if rapidly approved by the General Assembly and signed by Gov. Mike DeWine, would not take effect until January.

"Longer-term, it also aligns the incentives of the legislature with those of our constituents. That's similar to what we do in the private sector," he said. "When times are good, we get paid more. But we also need to share in the pain of some of our contituients when times aren't so good," he said.

“Elected officials seldom ‘share in the pain’ when there is an economic downturn. This change will tie a legislator's salary to the economic well-being of the state,” Romanchuk said.

Romanchuk and Becker said the bill would reflect fiscal reality and also show government empathy for private citizens during a difficult time.

"However you feel about the extent of our state's response (to COVID-19), it's self-evident that our government's actions have caused financial hardship for millions of Ohioans," the two state in a statement when the bill was introduced.

"It only makes sense that we sacrifice a little bit when many people have lost their entire livelihoods. We are going to have to make some tough decisions about how to balance our budget moving forward. This should be one of the easy decisions," they said.

Under HB 695, General Assembly members’ annual salaries would fluctuate annually based on Ohio’s most recent statewide median household income according to U.S. Census Bureau Table B19013, or its successors, as available on Dec. 31 of each year.