The Ontario Republican, who moves to the Ohio Senate in January, testified before a Senate committee on Tuesday in support of HB 772, which he introduced Sept. 30.

The bill has now been assigned to the House Select Committee on Energy Policy and Oversight. An invitation to offer testimony before the Senate even before the bill emerges from a House committee was unusual, Romanchuk said.

"(But) both the Senate President (Larry Obhof) and the House Speaker (Robert Cupp) have indicated they want something done by the end of the year," Romanchuk said. 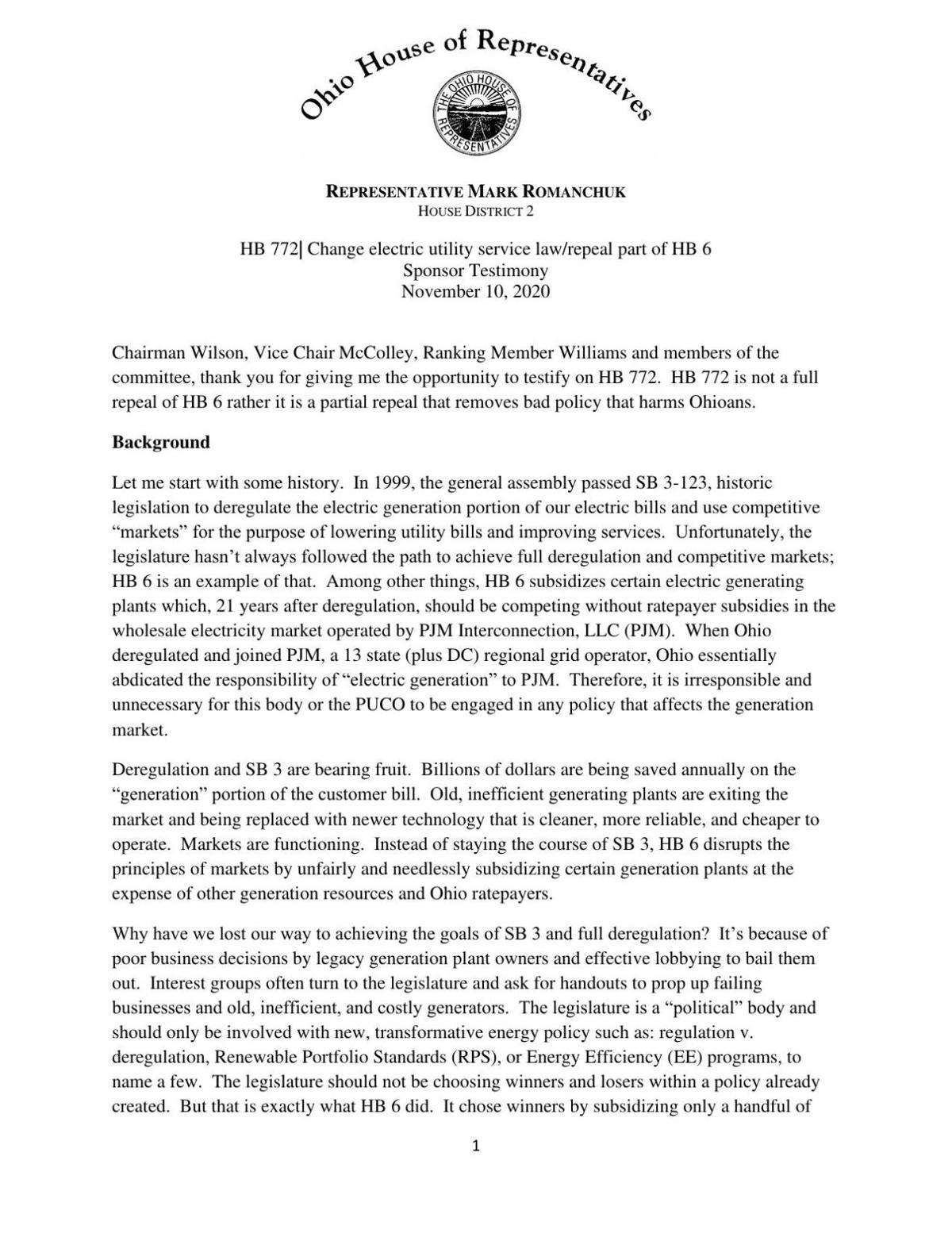 Romanchuk, who voted against HB 6 when the House approved it, 51-38, said his bill would save Ohio taxpayers $2.9 billion over the next 10 years -- and end unnecessary bailouts to energy companies.

During his testimony before the Senate Energy and Public Utilities Committee, Romanchuk said the primary focus of HB 6 was to financially prop up owners of two nuclear power plants in Ohio -- assistance that was never needed.

“The $150 million annual nuclear subsidy from Ohioans was never needed to sustain the operation of the two Ohio nuclear plants. Evidence was provided by witnesses during the House Bill 6 debate that financial instability was likely untrue,” Romanchuk said. “If the standard is to save our constituents money on their electric bills, House Bill 772 is the only repeal bill that will save Ohioans money.

"Ohioans will save a total of $2.93 billion as a result of passing House Bill 772. It’s time to put our constituents first and leave this money where it belongs, in their pockets." 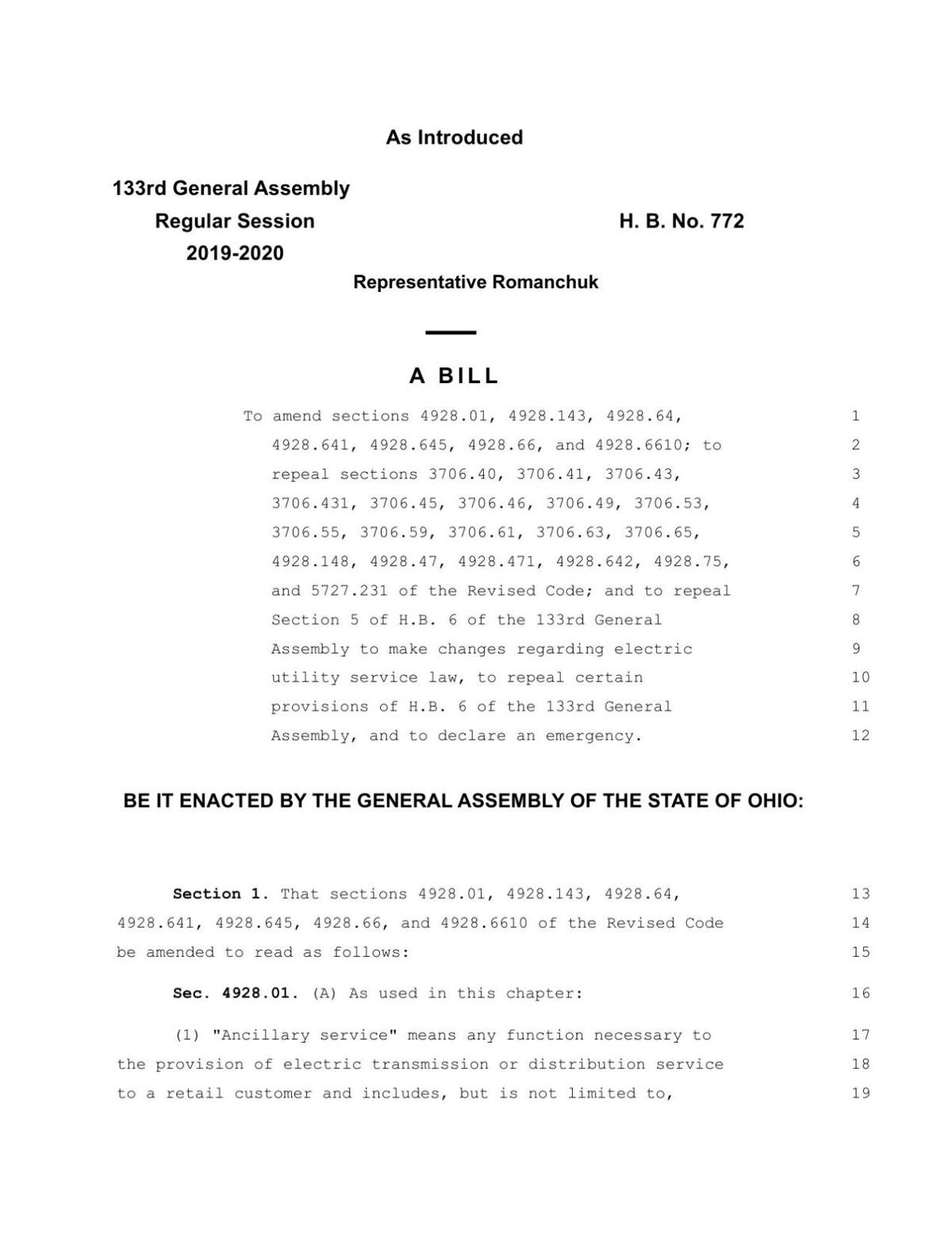 Federal prosecutors have said the tainted bill was approved as as part of a $60 million bribery scheme led by former House Speaker Larry Householder, who faces charges. Those prosecutors said Householder played a key role in the scheme, paid by Akron-based FirstEnergy and its affiliates, in exchange for Householder helping push through the bailout for the nuclear plants then owned by the company.

The federal charges claim the money was spent on ads and other political efforts to help Householder regain the speaker's role, press the legislation through and then defend it against repeal.

Householder and four others were arrested on federal charges in July and the case continues to unfold.

FirstEnergy Corp. in October fired its former CEO and two other senior executives after a review of the case. The FBI executed a search warrant Monday at the Columbus home of Sam Randazzo, chairman of the Public Utilities Commission of Ohio, the state's top utilities regulator.

The reason for the search was not immediately known. Randazzo, appointed to lead PUCO in 2019 by Gov. Mike DeWine, has connections to FirstEnergy. There was no indication Randazzo was the subject of any investigation.

"This (investigation) has a lot of fingers. There is a lot we don't know yet," Romanchuk said.

After Householder's arrest, members of the Ohio General Assembly from both sides of the political aisle vowed to repeal HB 6, which also provides subsidies to coal and solar power plants and cuts the state mandate for green energy.

Romanchuk's bill is a step in that direction, ending taxpayer subsidies for nuclear, coal and solar, but keeping the HB6 cuts to renewable energy standards and the elimination of the energy efficiency standards.

The veteran business owner and lawmaker said HB 6 removed two electrical-bill "riders," i.e. surcharges, and added four new ones, two of which take effect at the start of 2021.

"It is irresponsible and unnecessary for this body or the PUCO to be engaged in any policy that affects the (energy) generation market," Romanchuk told the Senate committee.

Romanchuk also said Energy Harbor, a former FirstEnergy subsidiary that now owns the nuclear power plants, is doing fine financially. He cited its $800 million stock buyback offer in May as evidence the company finances are in great shape.

He said it took the $60 million campaign to push HB 6 into law.

"(Power companies) claimed we needed to save the two nuclear plants and all of that is false," Romanchuk said. "They used the $60 million to create this campaign and to convince legislators this was good policy and they should move forward.

Romanchuk noted with the lame-duck session state lawmakers would have to move quickly to pass the bill. He seeks to have his legislation passed as an emergency, taking effect as soon as DeWine would sign it, meaning it would take a two-thirds vote of the House and Senate.

"It won't get out of the (House) committee this week. The House probably will not have a chance to vote on it until after Thanksgiving," he said.