Tom Wade of Wade Gardens Landscaping and Gifts explains to residents a beautification plan for the front lawn of the Richland County Administration Building on Tuesday morning during a commissioners' meeting. 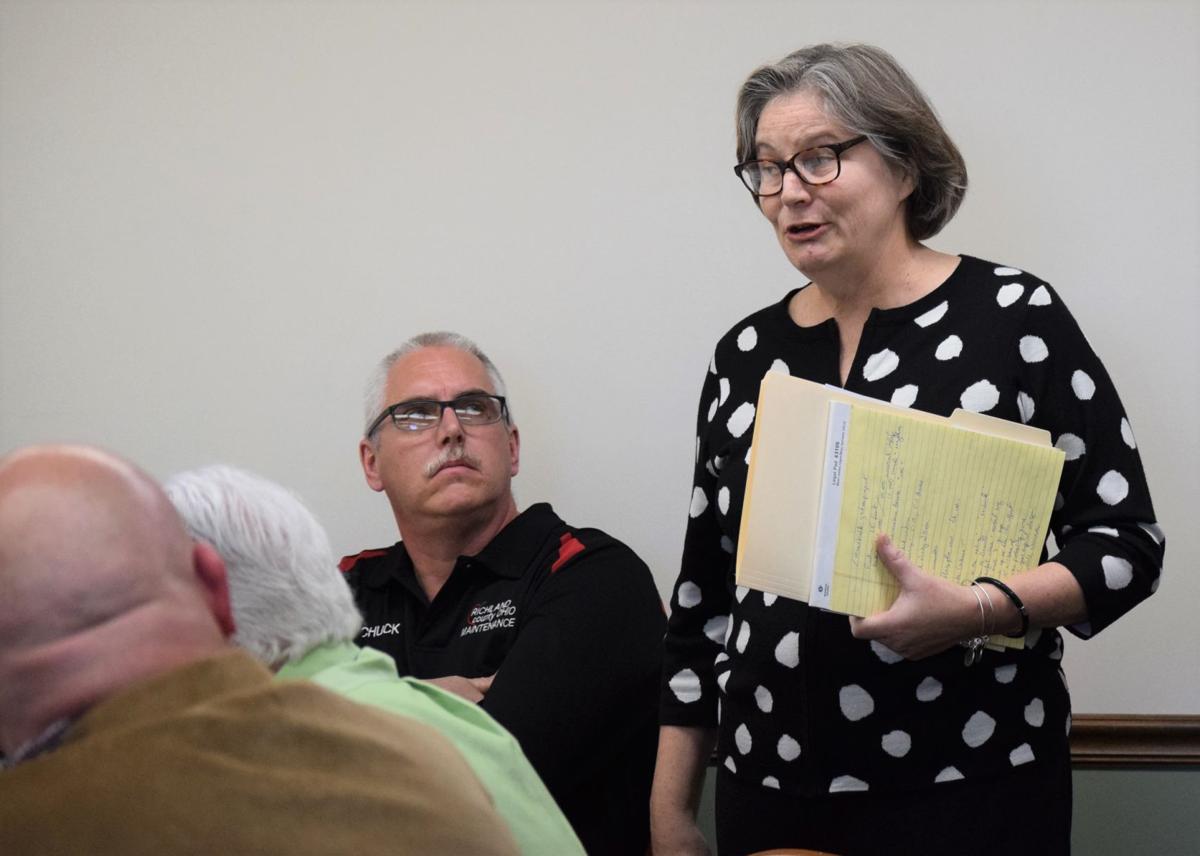 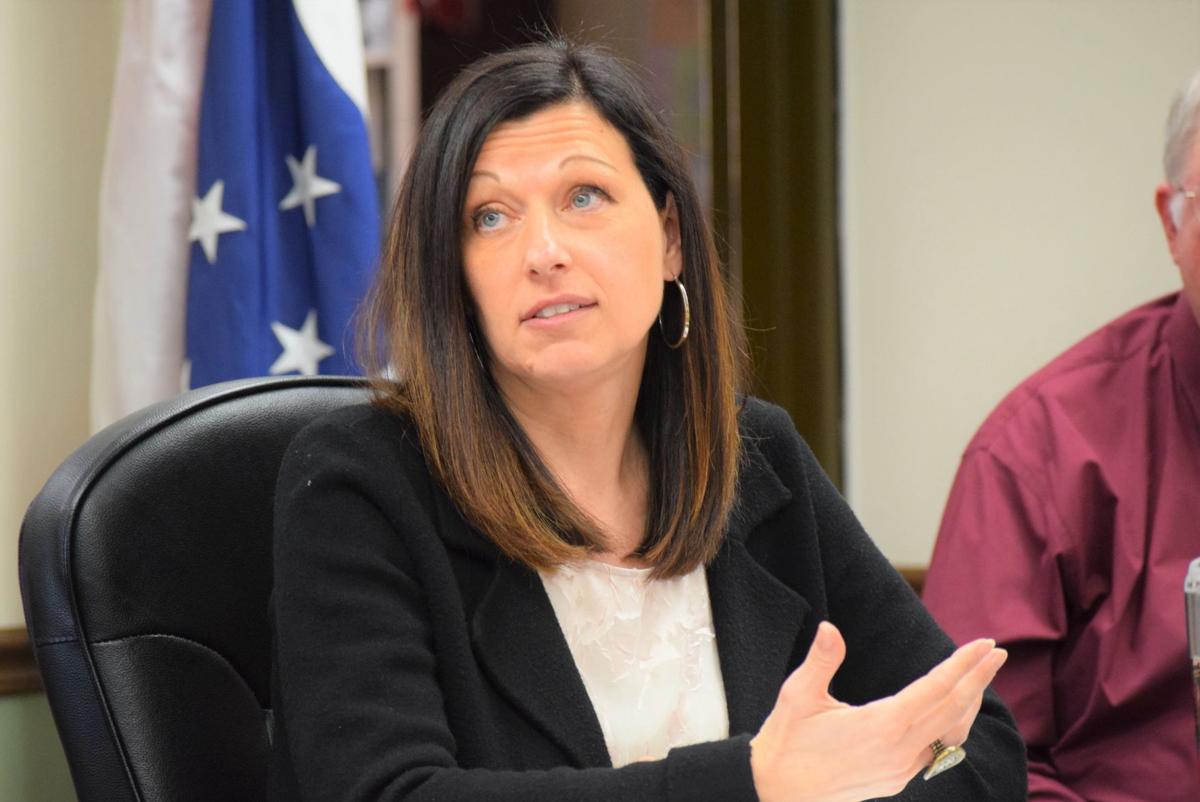 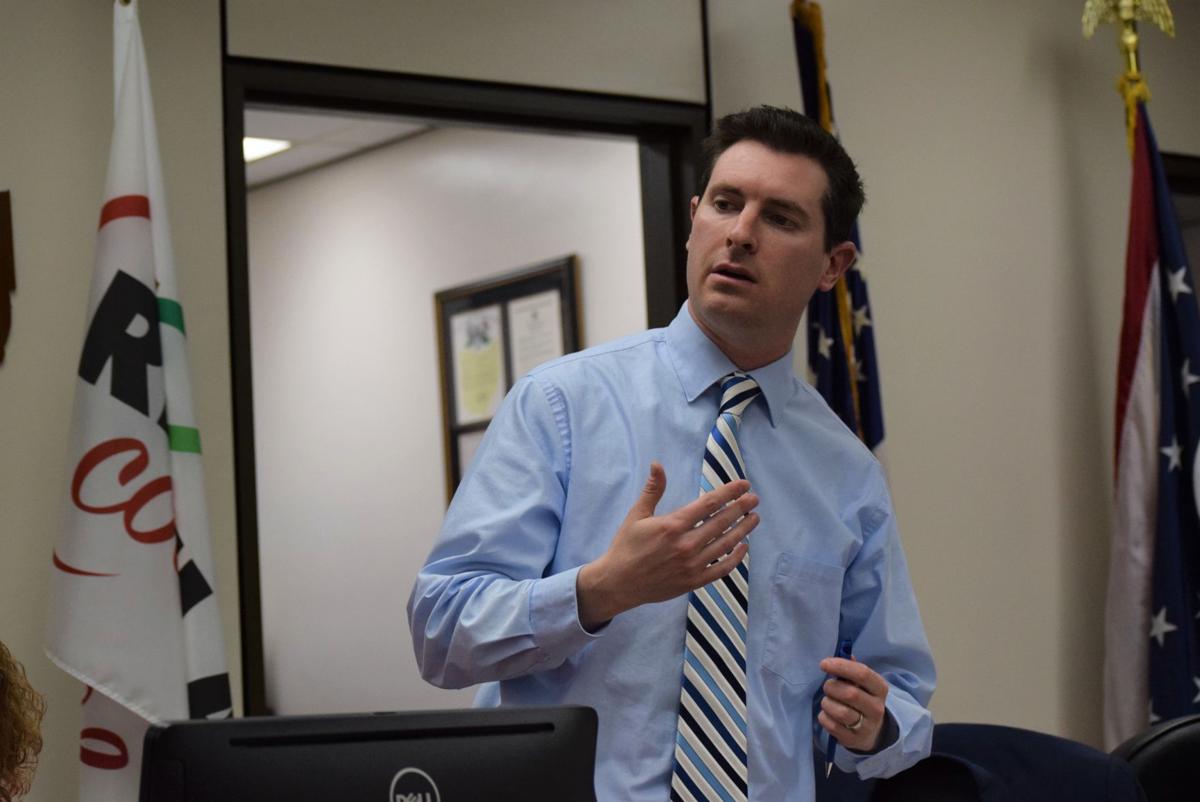 Richland County Commissioner Tony Vero said this week he is concerned about the local financial costs that could be associated with Senate Bill 3. 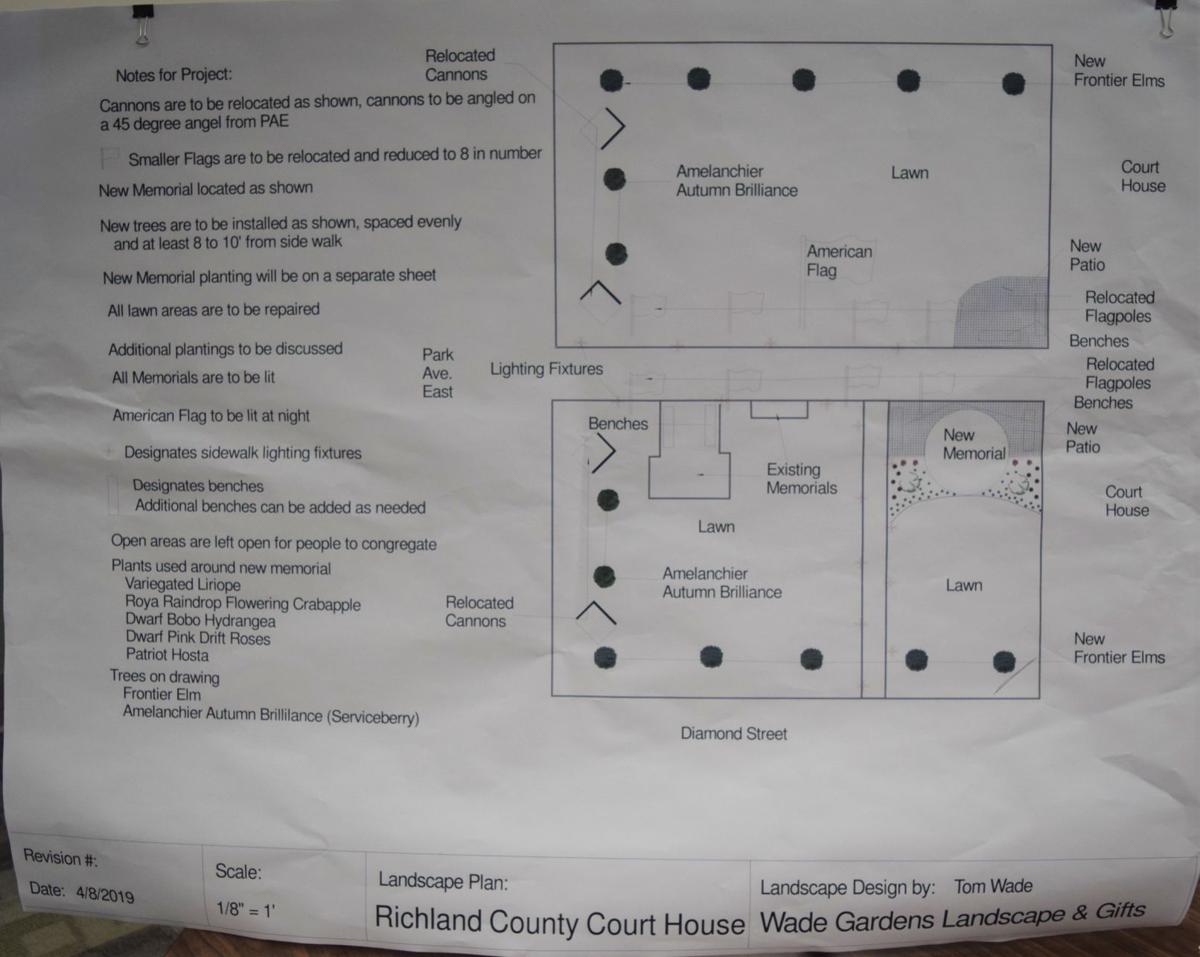 Above is a diagram of a proposed beautification plan for the front lawn of the Richland County Administration Building. 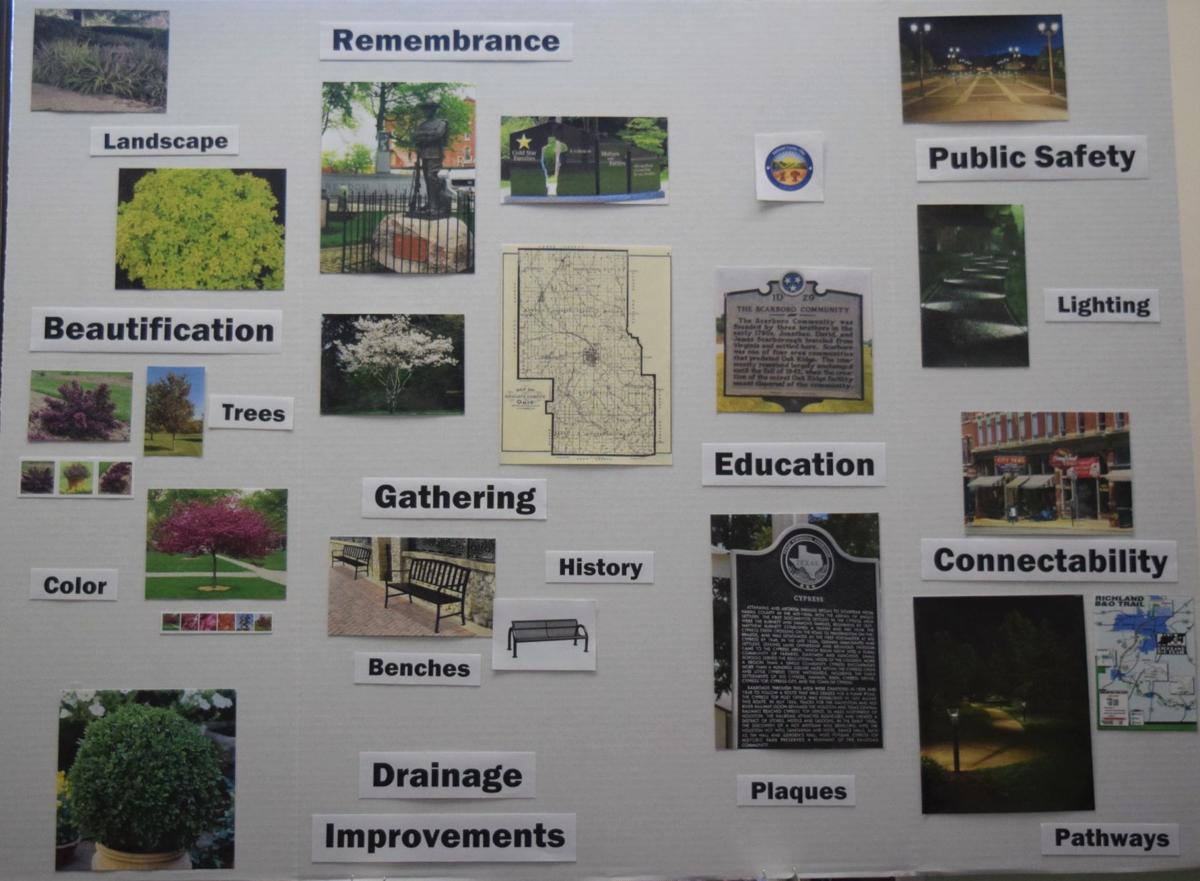 Above is a presentation showing goals for a planned beautification plan for the front lawn of the Richland County Administration Building.

MANSFIELD -- A controversial proposed beautification plan for the front lawn of the Richland County Administration Building was unveiled on Tuesday morning.

But public concern about a dozen trees cut down and removed from that same lawn two weeks ago still sparked a spirited debate during a 75-minute Richland County commissioners' meeting.

The meeting room was full for the session, including those who spoke against the tree removal and also those in favor of the beautification plan.

That debate included a written public records request from Mansfield attorney Cathy Goldman, seeking all records pertaining to the commissioners "consideration of, decision to, and execution of the destruction of the trees," and "the development of and budget for a new landscape at that location."

"(The removed trees were) were awful close and awful big for where they (were)," Wade said, telling commissioners and those in attendance that the large trees, mainly tulip poplars, posted an ongoing maintenance problem.

"Being trees of that size, when you limb them up so far, you kind of lose the effectiveness of them. If you try to thin them out, you have bare sides all the way through on them.

"In my opinion, it was probably time. Most streetscapes are designed for a 20- to 25-year period. Trees get too big. Eventually they outgrow the area. It's just the cycle. Trees are a renewable resource."

Wade said one goal of the plan is make the lawn more of a part of the Central Park.

"Right now, it's not. It's just a separate entity."

The plan includes lighting all of the memorials on the lawn at night, as well as the U.S. flag and knee-high lighting along the sidewalks.

The commissioners approved the removal of 12 trees, including 10 tulip poplars, in March during a public meeting.

Wade said 16 trees will be planted in the beautification plan, including 10 frontier elm trees and six amelanchier autumn brilliance, or serviceberry trees. He said the new elms are resistant to dutch elm disease and would be about 12 feet tall at the time they are planted.

"You are increasing the number of trees in this area. And they are gonna grow. It is a change. There is no doubt," Wade said. "I am not a plant peddler. I am a looks guy. Visually, I want things to look really nice, as nice as we can make them. I am looking for the 'wow' factor. I want people to say 'wow, this is looking good.' "

Wade said the frontier elms will grow quickly, but will stop around 30 to 35 feet in height. He said these elms are low maintenance and are not a stiff-limbed tree.

"Crows really won't be nesting in them," he said.

Wade said the courthouse is a "pretty building" that has been hid.

"We will have visual lines to the courthouse all the way through. Let's make this inviting. Let's make people glad they are here," he said. "What I envision is the courthouse becomes a focal point of the downtown. It wasn't before. It's just plopped here."

Commissioner Tony Vero said the cost of the trees and new grass on the lawn would cost around $6,500 and would come from the county's capital improvement plan, not operating funds.

He said commissioners have saved money into a capital fund for the last two years. Other costs associated with the beautification plan are not yet determined, he said.

After Wade's presentation, Goldman asked him, "Did you recommend (to commissioners) the removal of every tree on the front lawn prior to them having been removed?"

Wade replied, "Did I recommend? No, ma'm," adding quickly, "If they would have had asked for my recommendation, I would have said tear them out ... take them down, flat out."

Goldman said she did not believe the landscaping would improve the appearance of the lawn and accused commissioners of acting secretly to remove the old trees.

"I object to the destruction and the completely secret deliberation that went into this," Goldman said. "If these public officials don't care enough to gather public opinion before making the most dramatic change to the landscape of downtown Mansfield in my lifetime, then they don't deserve to be public officials."

Vero, who said commissioners discussed the tree removal/beautification plan in three public meetings and also obtained the blessing of the Mansfield Shade Tree Commission, said the landscape plan will be a big improvement.

"I think what we presented today is outstanding," said Vero, who is also an attorney.

Vero said the fact commissioners discussed the plan in three public meetings and also sought the Shade Tree Commission approval proves there was no attempt to operate in secrecy.

"If we had wanted to do this in secrecy, in no way, shape or form would this board under any circumstances would have submitted a request (to the Shade Tree Commission) that also meets in public," Vero said. "You and I will forever disagree on that."

"We would have done it in one meeting and said those trees are coming down."

Goldman said, "The only public aspect of what you did was the door was open and someone could have stumbled in here to hear what was going on."

Goldman said she had spoken to members of the Shade Tree Commission and they had told her they had no idea county commissioners planned to cut down every tree on the lawn.

Commissioners have previously released a letter, dated March 18, from the Shade Tree Commission, signed by four of its five members.

"The Commission has approved your request for immediate removal of the Tulip Poplars and looks forward to seeing the transformation based upon your plan with the memorials and redesign of the landscape to compliment the memorial," the Shade Tree Commission said.

"The Commission is also in agreement with your plan for removal/replacement of the remaining trees, which will be completed in stages," the Shade Tree Commission letter said.

Can the commissioners and their critics see the forest for the trees?

The commissioners have caught an enormous amount of flak recently over the removal of a dozen or so tulip poplars from the Richland County courthouse lawn. They deserved all of it; but not because they don’t care about the environment or operate some secret local government cabal, as has been suggested.