MANSFIELD -- Richland County Commissioner Marilyn John learned via late-night text about the planned statewide crackdown on bars and restaurants that don't comply with social-distancing requirements while re-opening during the COVID-19 pandemic.

John and Commissioner Tony Vero both expressed frustration Tuesday morning that most of the communication coming from Columbus recently is largely during two-hour televised press conferences.

"If you have two hours to watch, that's how you get information at the state level as to what's going on," said John, adding she received a text about the issue from the governor's staff Monday just before midnight.

John said she spoke with Richland Public Health Commissioner Sarah Humphrey. She said Humphrey told her there were no significant issues with the county's bars and restaurants, some of which re-opened last weekend with outdoor/patio service.

"We had great compliance with the rules across Richland County," John said. "(Humphrey) has seen very few issues. She doesn't even use the word complaint."

"We know that many Ohio bars and restaurants are working very hard to comply with the safety guidelines, and I want to commend them for doing that," DeWine said. "We did, however, receive several very troubling reports this weekend of bars and restaurants that were not complying with proper social distancing guidelines."

John said she hopes such efforts are not needed in Richland County.

"Let's hope we don't reach that level, or that further action is taken in the General Assembly, prior to the Ohio Investigative Unit being sent out to investigate local businesses that have already suffered enough (during the state shutdown that began in March)," John said.

It's all part of the medical orders from Dr. Amy Acton, the state's health director, who has used Ohio Revised Code 3701.13 in a series of orders during the pandemic that have been issued with DeWine's blessing.

Both commissioners questioned if the state economy has actually been re-opening in the last couple of weeks under DeWine's "Stay Safe Ohio" protocols.

"If protocols are in place that keep 75 percent of a business closed, is it really re-opened?" John asked. "No one in this room thinks coronavirus is not real, that it's not deadly, that it's not contagious.

"But we can say those three things are true and maybe we need to introduce some reasonableness into hose protocols."

Vero said DeWine is making a political statement when he announces 90-plus percent of the state's economy has re-opened.

"If a restaurant is open at 25 percent, that's not open," Vero said.

John said federal and state guidelines indicate local governments and residents should listen to medical professionals, but she hears differing opinions from those professionals.

"Who do we listen to? Amy Acton? The (U.S.) Surgeon General? Because they are not all on the same page. Which medical professionals do you want us to listen to?" John asked.

Vero replied with a laugh, "The one whose name is Mike DeWine."

Vero also questioned DeWine's protocols for the safe return of youth and adult baseball and softball. He asked how leagues could enforce the protcols, including the requirement that all players, coaches and umpires wear masks.

"I have parents telling me I don't want my kid running around the bases on a hot day and then coming into the dugout to put on a mask," Vero said, adding he questioned how the masks could be kept sanitary in a dugout environment. 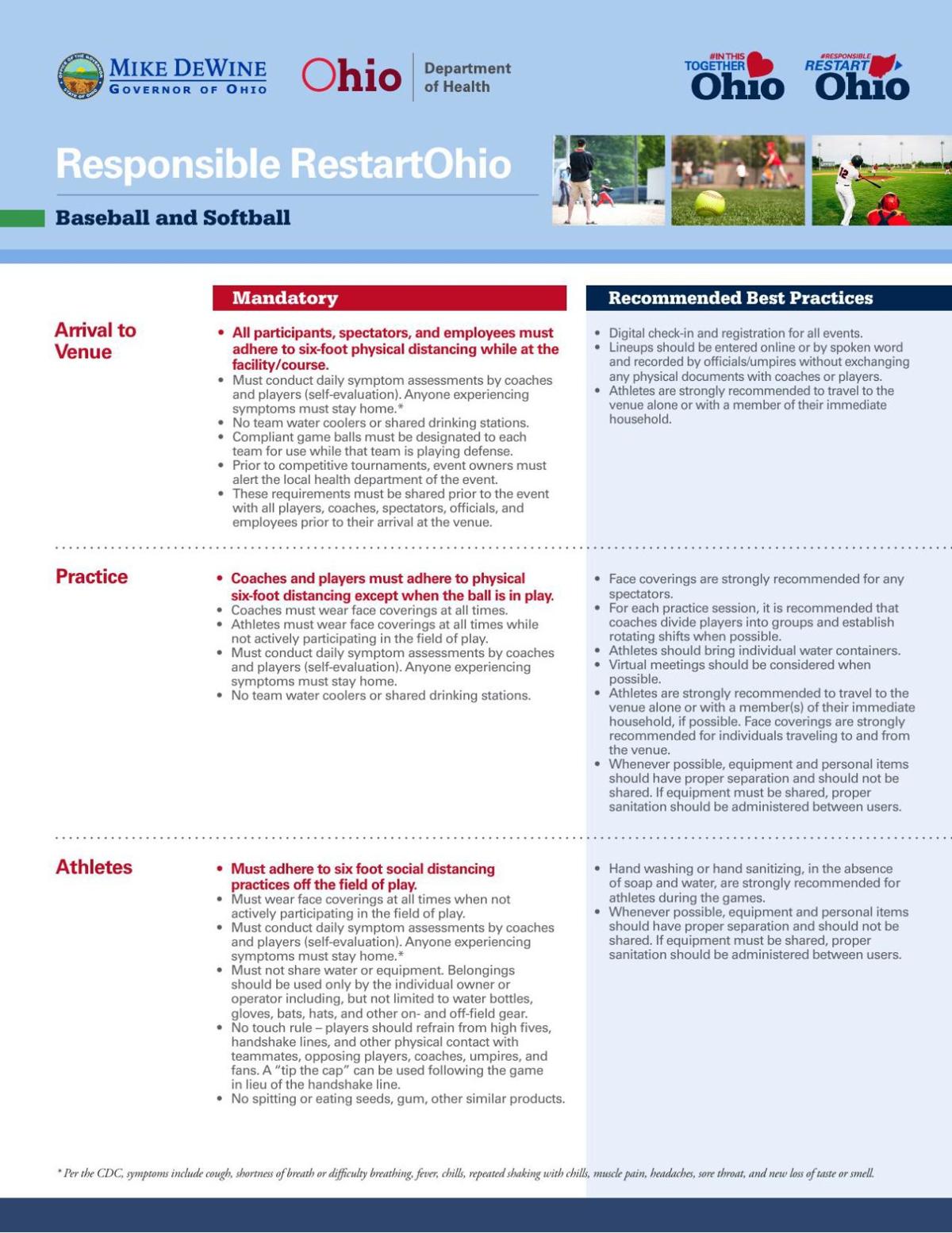 "Are you supposed to put on a different mask every time? I have people asking me, 'Who put these rules together? Did the governor ever play sports?'"

Vero, a Lexington resident, said the Lexington Softball & Baseball Association has told him the league would not play this season because of the new requirements.

"Their overwhelming belief is they cannot comply with these protocols, nor can they enforce them," Vero said.

Also on Tuesday, commissioners heard from Richland County Sheriff's Capt. Jim Sweat that the department received a $112,865.95 grant from the state to help pay for the upgrade of the county's 9-1-1 software system.

COLUMBUS — Ohio Gov. Mike DeWine said Monday that he is assembling an enforcement team to ensure that bars and restaurants are operating safel…