MANSFIELD -- Richland County on Wednesday received the best bond rating in its history, a decision by S&P Global Ratings that could save local taxpayers about $500,000 in interest payments.

"The rating action reflects our opinion of the steps taken to improve county’s finances and management's ability to achieve positive operations during the past four fiscal years while projecting similar fiscal 2019 results," S&P said in the report accompanying its decision. "In addition, the county's economy has experienced stable and consistent growth during the same period."

S&P, which conducted a conference call with county commissioners and Auditor Pat Dropsey last week, upgraded the county's "credit score" to "AA-," from its current "A+" rating.

Richland County Commissioners are seeking to refund long-term bonds and replace them with lower-interest notes, which could save more than $500,000 in interest payments over the next 17 years. The bonds were initially sold in 2011 and 2013, related to the new county jail. 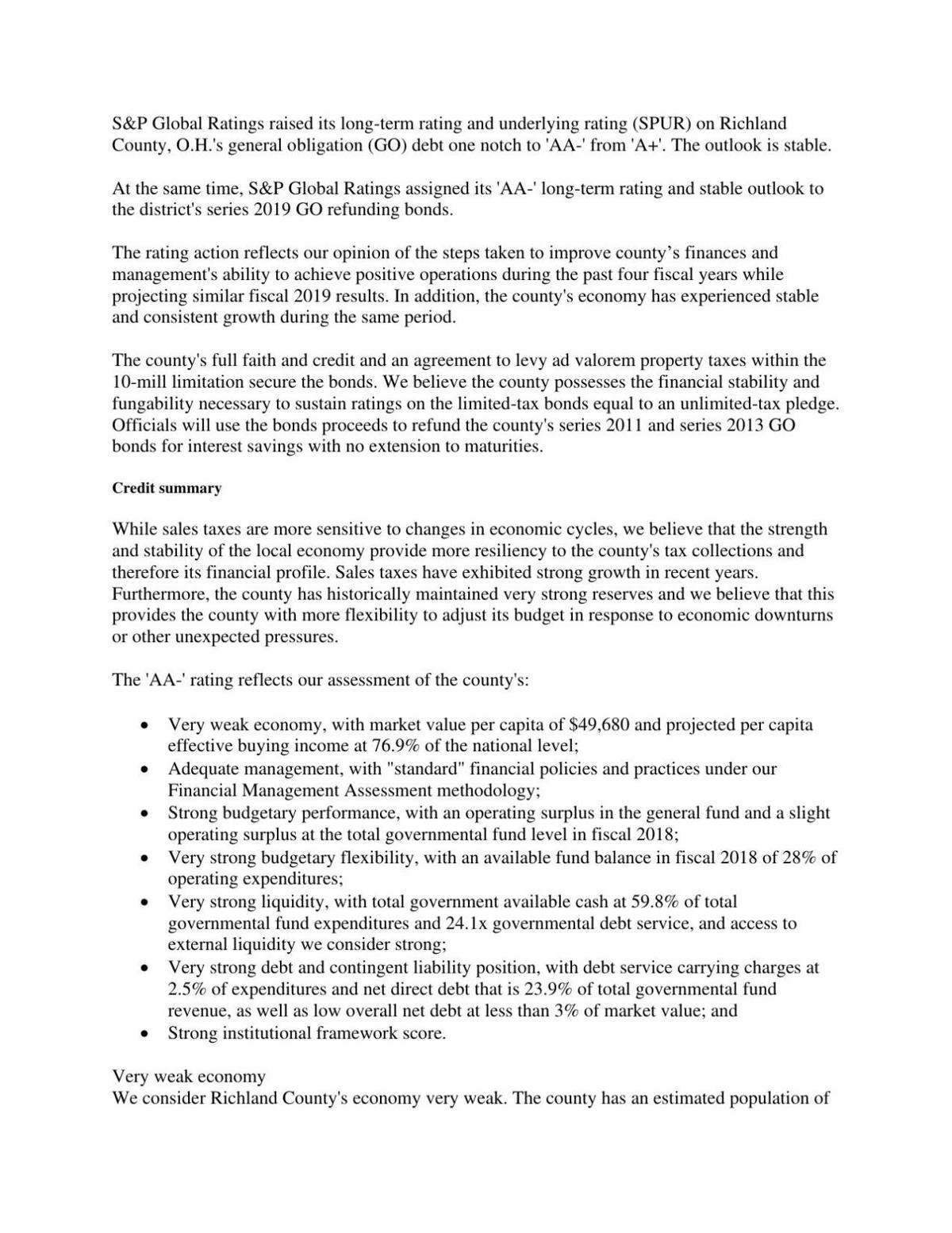 Commissioners, who initially discussed the idea in June, approved the plan in September after meeting again with Joseph Robertson, managing director of Hilltop Securities, which underwrites the bond sales efforts.

Robertson said Wednesday he will take the bond issues to the market within the next two weeks, where investors will bid to purchase them. After the conference call, Robertson said some in the bond market only purchase notes rated AA or higher.

The improved rating would result in a bigger buyer group, more aggressive bids and a lower interest rate, Robertson said.

According to the S&P website, "a credit rating is an educated opinion about an issuer’s likelihood to meet its financial obligations in full and on time. ... It’s not a guarantee or absolute measure, but is a crucial tool for investors in the decision-making process."

Commissioner Tony Vero, chair of the board that includes Marilyn John and Darrell Banks, praised the decision Wednesday.

"Richland County residents can take comfort in the fact that their county government is on sound financial footing," Vero said. "The record rating is a reflection of the emphasis all of the county's other elected offices and department heads place on fiscal responsibility."

John, whose five years represents the longest current tenure among commissioners, said she is pleased with the improved rating.

"Five years ago, when I took office, the financial picture of the county was one of my mine goals as far as improvement goes," she said.

"This rating shows how strong and how significant the improvements have been," she said. "Some of the change is specific to the economy, which is better, but also to the financial policies we have put in place over the last give years."

John credited other entities, who she said have worked to improve the county's financial situation, including the Richland Area Chamber & Economic Development, the Richland Foundation and those behind the Mansfield Rising downtown revitalization plan.

"There are a lot of people working diligently every day to make improvements in our community. I want to thank everyone who came together as team for Richland County ... it's showing in this financial rating," John said.

"While sales taxes are more sensitive to changes in economic cycles, we believe that the strength and stability of the local economy provide more resiliency to the county's tax collections and therefore its financial profile.

"Sales taxes have exhibited strong growth in recent years. Furthermore, the county has historically maintained very strong (financial) reserves and we believe that this provides the county with more flexibility to adjust its budget in response to economic downturns or other unexpected pressures," S&P said.

The ratings company said the county's budgetary performance is strong.

"The county had surplus operating results in the general fund of 3.9 percent of expenditures, and slight surplus results across all governmental funds of 0.5 percent in fiscal 2018.

"Richland County's budgetary performance is strong, in our opinion, as it has a track record of achieving consistent operating surpluses over the past four years given its conservative budgetary practices and the strength of management," S&P said.

Despite the improved rating, S&P was critical of the local economy in its report.

"We consider Richland County's economy very weak. ... The county has a projected per capita effective buying income of 76.9 percent of the national level and per capita market value of $49,680. Overall, the county's market value grew by 2.1 percent over the past year to $6 billion in 2019. The county unemployment rate was 4.9% in 2018," S&P said.

John said that section of the report shows more work must be done.

"There is always going to be work to do," she said. "When you are standing still and not making progress, you are declining because you are not keeping up (with the competition). But I think we are headed in the right direction. We have great momentum."