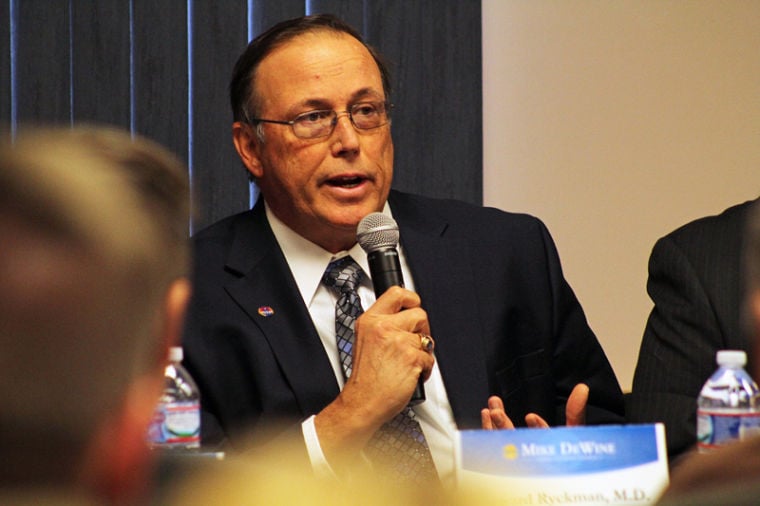 Coroner Stewart Ryckman says the Richland County coroner's office is fortunate to have the support of the commissioners office, but many counties don't have the funding needed to adequately report data to state officials. 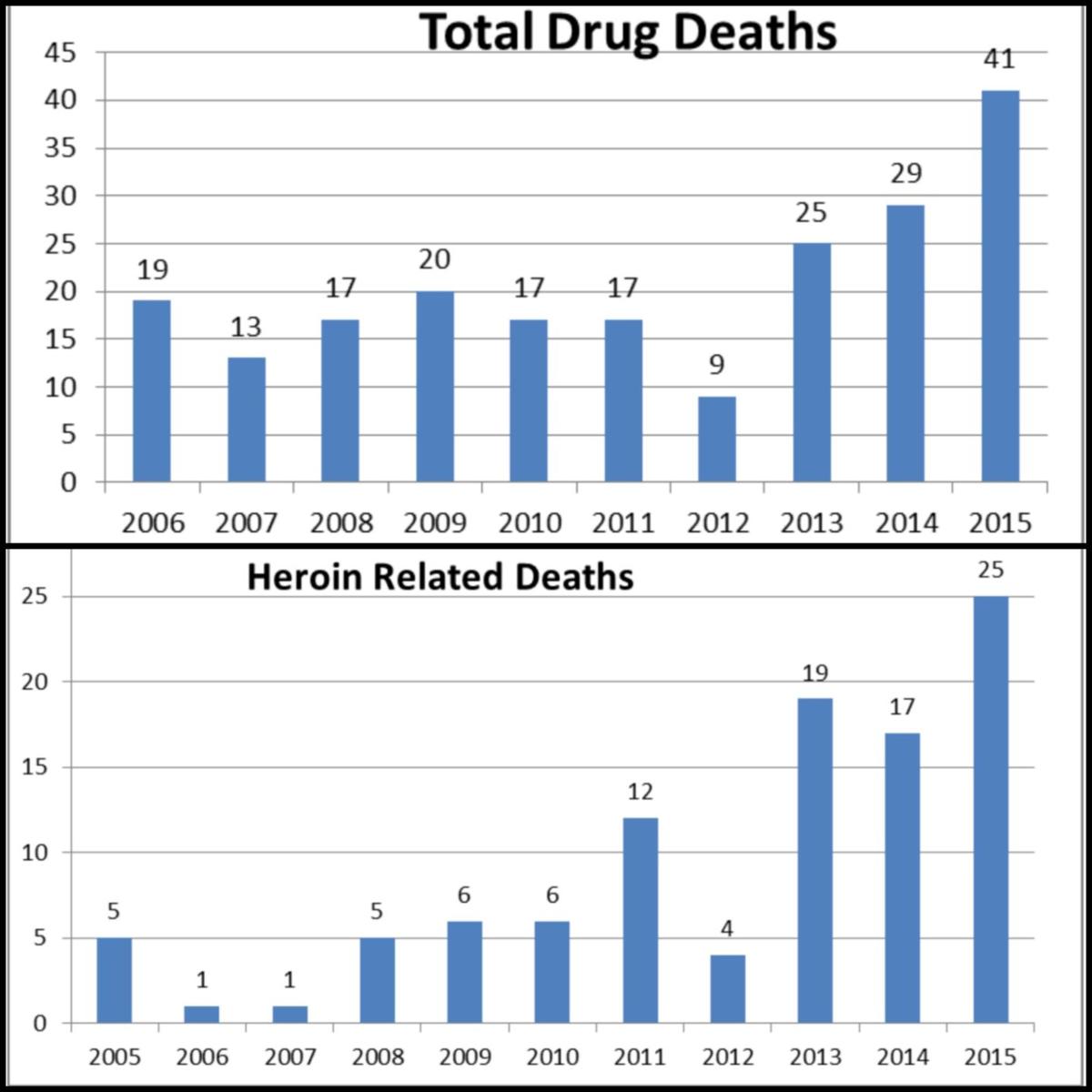 MANSFIELD — The drug problem plaguing cities across Ohio and the nation affects more than the addicted and their family members.

The swell of drug-related deaths is meddling with government spending, and the department taking the hardest hit in Richland County is the coroner’s office.

By Ohio law, coroners are expected to investigate any death which occurs under questionable circumstances, including drug overdoses, according to Richland County Coroner Stewart Rykman’s 2015 annual report.

The report shows a glaring drug-abuse problem, specifically with heroin, and a gradual increase in drug-related deaths over the decade. Richland County Coroner's investigator Bob Ball said the county is on track to at least match last year’s spikes with two months remaining in the year.

“It’s crazy,” Ball said. “We’re getting slammed all over the country. I’ve never seen anything like it.”

According to Rykman’s 2015 report, the department was originally budgeted $297,400 for operations, which represented a $15,000 increase from the previous year’s budget.

“… but actual spending was $341,296, primarily because of an unexpected increase in coroner’s death cases and autopsy requirements,” Rykman wrote.

The department used $161,973 for services and non-contract work — which largely represents autopsies.

In 2016, the coroner’s office requested $338,942 as an operating budget, of which $155,300 was used for services and non-contract work. As of the first week of October, the department has spent almost 94 percent of that part of the budget, according to Richland County Auditor records.

Ball said at this time last year, the coroner’s office had sent 86 decedents to labs in either Summit or Cuyahoga counties for autopsies. As of Monday, there were 79 — not counting the two suspected drug overdose deaths that happened over the weekend.

“I suspect we won’t have any more money. I’m hoping they (overdose deaths) slow down, period,” Ball said.

All deaths requiring an autopsy are transported to Montgomery County in Dayton, Ball said.

According to Montgomery County Coroner records, that county is getting hit hard as well. As of June, the county reported 181 accidental drug deaths and 39 of them involved heroin.

“There’s no other place to send them (autopsies)," Ball said. "There’s no local facility that does that — no lab, no forensic pathologist. Montgomery County, as of right now, is the only one that will take our suspected drug overdoses.”

Carfentanil, also a synthetic opiate, is known to be used as an elephant tranquilizer.

Masnfield Chief of Police Ken Coontz said he hopes this information can reach those afflicted by a heroin addiction and those who know of users and sellers. 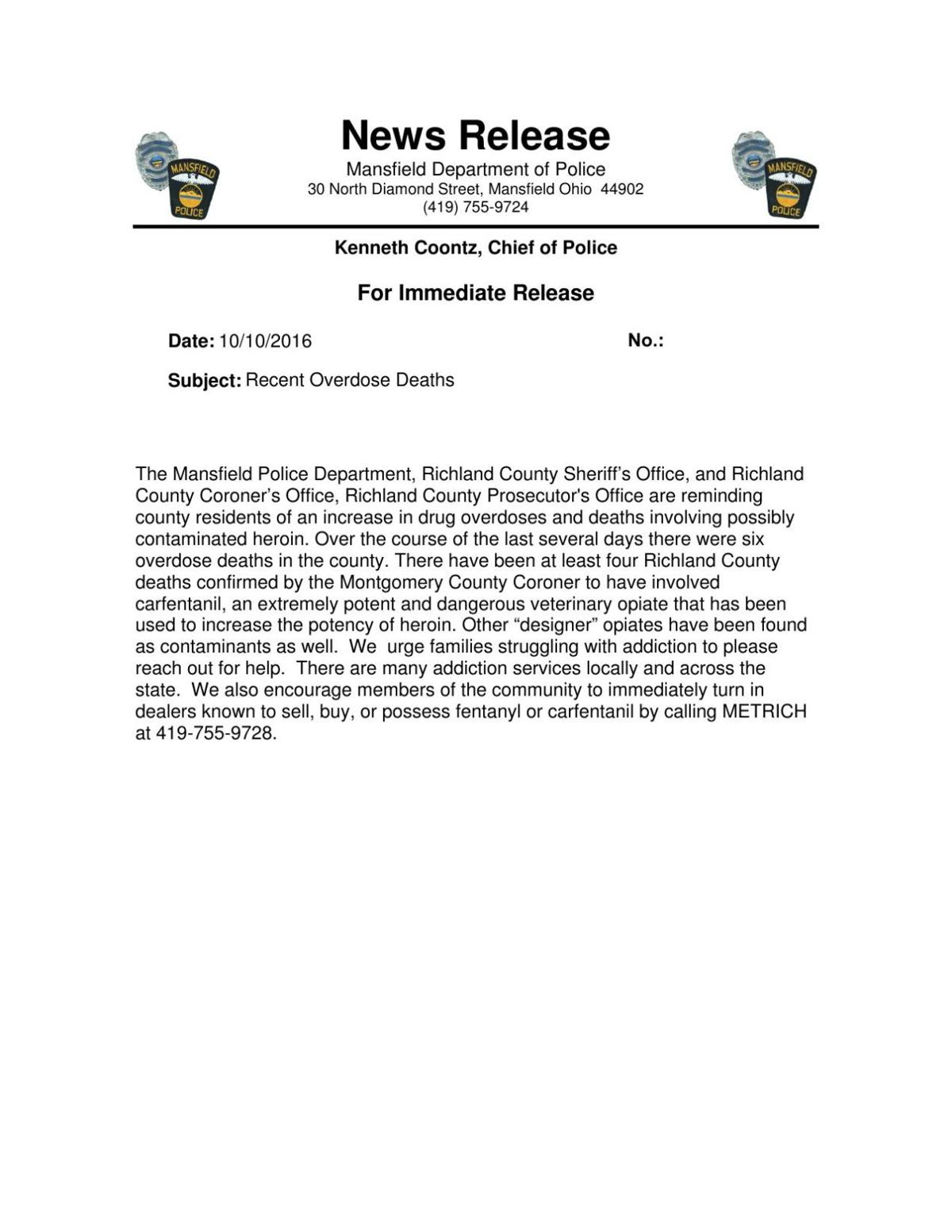 “We urge families struggling with addiction to please reach out for help. There are many addiction services locally and across the state,” he said in a press release. “We also encourage members of the community to immediately turn in dealers known to sell, buy or possess fentanyl or carfentanil by calling METRICH.”

“There’s a lot going on with overdoses,” Coontz said. “It’s just so senseless.”