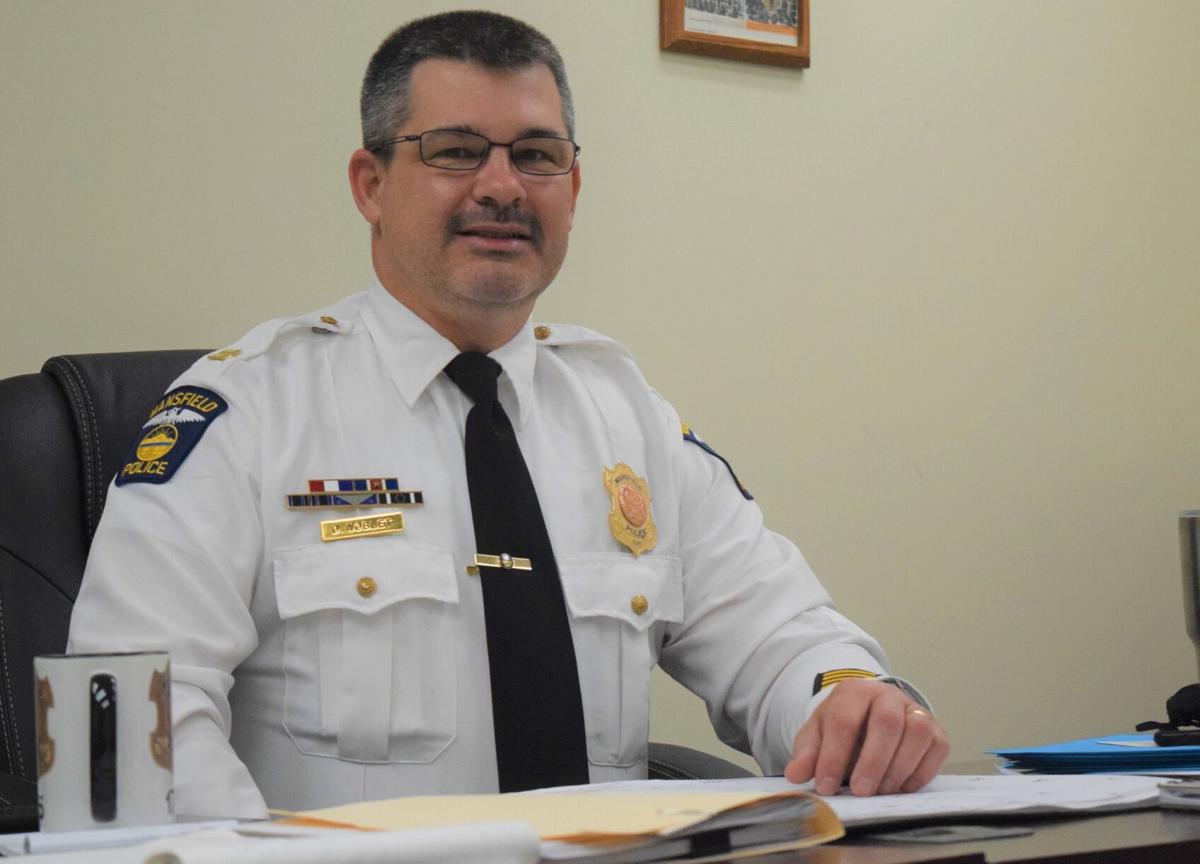 Mansfield police Capt. Doug Noblet is retiring from the department, effective Friday, bringing to an end a 30-year career in law enforcement. Noblet also served his country for three decades in the U.S. Army, the Ohio Army National Guard and the Ohio Air National Guard. 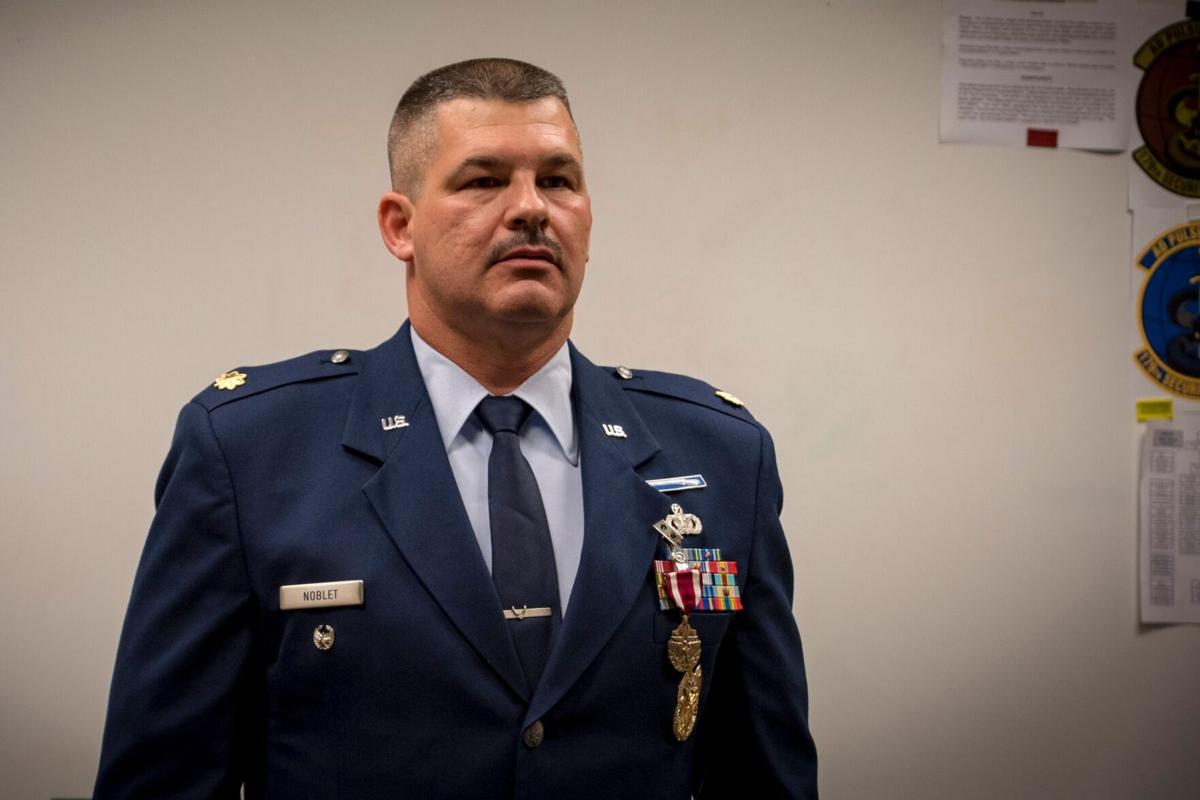 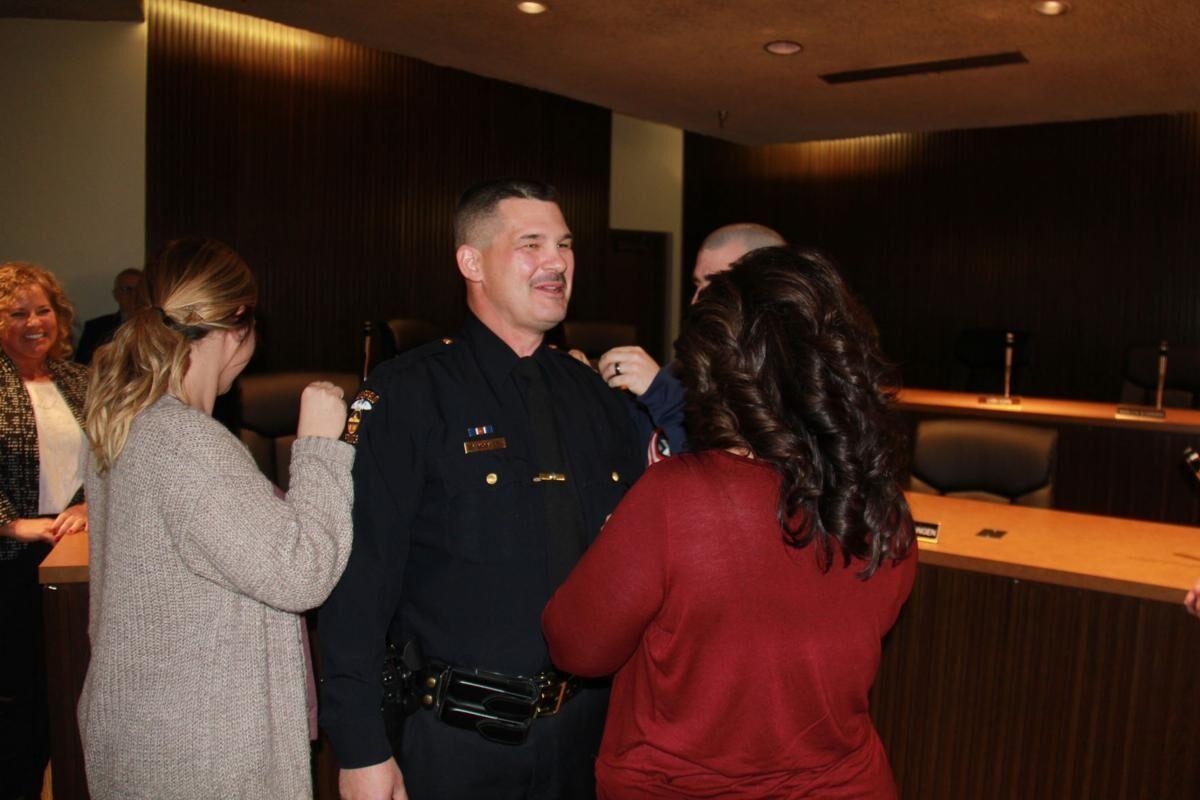 MANSFIELD -- Doug Noblet ran down and captured a suspect on his first day on the street as a Mansfield police officer. On his final day as a road officer, he did it again -- with one painful physical difference.

"I was helping another officer with a burglary suspect on my last day on the road," Noblet said Tuesday. "He took off running and I chased him down and tackled him ... but this time I pulled a hamstring muscle.

"I began to realize this is a young man's game,"  Noblet said with a laugh, thinking back over a law enforcement career that spanned nearly three decades.

Noblet will retire on Friday as a captain, marking a career of service that also included 30 years in the military in the active duty U.S. Army, Ohio Army National Guard and the Ohio Air National Guard.

When he ends his final watch as as the commander of the Community Services Bureau, Noblet knows it's the people he will miss the most.

"The thing I have enjoyed the most is the camaraderie," he said. "Anyone who has been a part of a team understands what that means. The bond we share together ... the times we talk together and reminisce.

"I wish I had kept a journal," he said, "because I have forgotten way more than I will ever be able to remember.

"As a lot of people would say, they won't miss the job, but they will miss the people," Noblet said.

FULL CAREER:  Noblet worked the full gamut of police operations during his career, which officially began April 1, 1992, in the patrol section after he concluded his service in the active duty U.S. Army.

He was promoted to sergeant on Oct. 30, 2008, and served in the major crimes unit as a detective.

Promoted to lieutenant on April 3, 2014, he served as the administrative lieutenant and later transferred to the training officer position.

Along the way, Noblet served on the department's SWAT team for 15 years; commanded the department's field training officers; worked as a department fitness instructor; a military liaison officer; and served as a member of the police advisory board, the departmental Honor Guard, and the bike unit.

Noblet, who retired as a major in the 179th Airlift Wing's Security Forces Squadron in December, also served as the MPD's incident commander for the past three years.

None of the titles, duties, letters of commendation, police awards or military medals mean as much to Noblet as the men and women with whom he served.

During a time of national discussion and criticism about policing efforts and practices, the retiring officer is happy to speak on behalf of his fellow officers.

In his current role, one of Noblet's tasks is to present the results of internal investigations to the Mansfield Police Review and Community-Police Relations Commission, created by City Council in 2003.

The investigations often come as a result of citizen complaints against officers and Noblet took his responsibility seriously.

"It's the review board's responsibility to make sure we did a proper investigation," Noblet said. "It's not for (the board) to decide discipline (against an officer) or to do their own investigation. But they will make sure we did everything we can or are supposed to do when a citizen files a complaint."

Noblet also informed the review board when citizens praised officers.

"A lot of that stuff that goes to the board can be considered a negative," Noblet said. "But we do receive a lot of compliments and I make sure to share those with the board, also. There are a lot of good things happening for which officers are not recognized."

TECHNOLOGY CHANGES: Noblet served under five police chiefs during his career, starting for Chief Lawrence Harper and ending with Chief Keith Porch. Each chief had his own leadership style, which could lead to changes in the department.

The one constant was changing technology.

"When I first started, we hand-wrote all of our paperwork. If you had a felony charge, you sat down at the typewriter to do the work. We didn't always have correctible tape. So if you made a mistake, you had to start all over again," Noblet said with a smile.

"Eventually, we advanced to computers and then to mobile reporting, about the time cell phones came out. Some of the officers struggled with that (new technology) and it seemed like we lost a few guys to that," he said.

There are times, however, when the old ways of doing things come in handy.

"Computers and technology are awesome, but when that stuff breaks down, some guys struggle. They ask 'What do we do now?" I say, 'well, pull out a report and write it.'

"For Christmas, you always got a pack of pens and a pad because you were always taking notes," Noblet said, producing a notepad from his uniform shirt pocket. "I still carry mine.

"But the advances in technology have been great for police work. Look at advances in DNA technology and how that has changed criminal justice itself," he said.

"(Crimes) that didn't get solved back in the day, we're able to solve it now because of technology," Noblet said.

THE WORST DAY: Noblet doesn't hesitate to describe his worst day on the job.

It was Dec. 26, 2007, when fellow officer Brian Evans was shot and killed by his own brother, Larry Evans Jr., who was later found not guilty by reason of insanity and remains under the care of a mental institution.

Brian Evans was killed while providing medical assistance to a man who had just been shot by Larry Evans. Off duty at the time, Brian Evans and his brother's wife had gone to check on Larry Evans, who suffered from depression.

When they arrived, they discovered that the brother's neighbor had been shot and was laying in the driveway. Brian Evans immediately went to check on the condition of the victim and ordered his sister-in-law to leave the area in the car.

At the same time, Larry Evans appeared in the driveway and opened fire, killing his brother. He was apprehended a short time later after being confronted by other officers.

Noblet, who responded to the scene, said Brian Evans died trying to help his brother.

"He was always that way, trying to help him. Because Brian knew, I think ..." the veteran officer said, his voice trailing off.

Noblet also helped in the successful search for national fugitive Shawn Christy, who was apprehended in Richland County in September 2018.

Christy was captured on Sept. 21 at at 4:38 p.m. near the area of Interstate 71 and U.S. 30 in Madison Township. A canine picked up his scent and led officials from the U.S. Marshals and numerous other law enforcement agencies to Christy, who was “actively hiding.”

“Nothing but high marks for the teams that located him. They are always aware of what’s going on, and you could see they were excited for the end, but they remained professional … They did exactly what they were supposed to do on that day,” he said.

TIME TO RELAX: Noblet doesn't have specific and immediate retirement plans when his final watch ends, other than spending more time with his family, including his wife of 29 years, two grown sons and a granddaughter.

"Probably like a lot of people (who retire). I bought a boat last year so we're going to do some fishing. I will try to get out and golf more. I am a big (Cleveland) Indians fan, so maybe get to some more games.

"I like being in the outdoors. I want to get back out, get healthy again and just relax," he said.

"I have had some really good support from family and friends during my career. This can be a tough job, but I am very appreciative of the great support.

"I am extremely happy at the end of the day to get to go home to my family," Noblet said. "The good man upstairs has been helpful with that."