TOLEDO -- An Ohio citizens group has filed a lawsuit in federal court to remove Gov. Mike DeWine's emergency health order, which was signed on March 9 and remains in place today.

Ohio Stands Up! describes itself as a grassroots organization composed of Ohio citizens focused on restoring the rights of Ohio’s 11.69 million residents and educating the public about the realities of COVID-19 data. 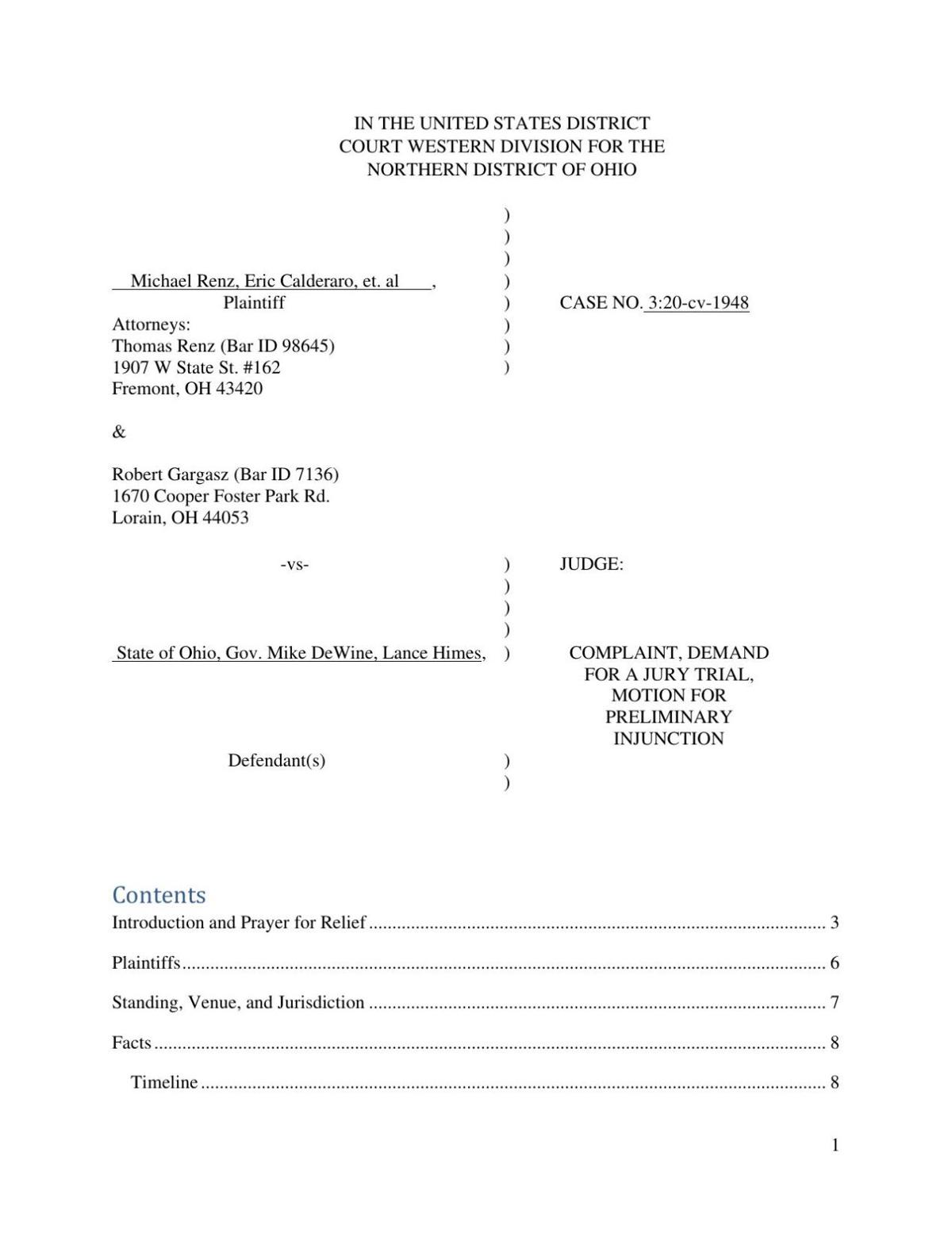 Ohio Stands Up! said it has filed suit in the Northern District of Ohio Federal Court in Toledo to remove DeWine’s emergency order. The group is represented by attorneys Thomas Renz of Fremont and Robert Gargasz of Lorain.

DeWine was asked about the lawsuit during a press conference Tuesday.

“We’re doing what we know will make a difference. We’ve been very thoughtful of what we’ve done,” he said. “None of these decisions are made in a vacuum...I just have to stay focused on what we need to do in Ohio.”

According to the Ohio Department of Health website on Tuesday, there have been 124,610 positive COVID-19 tests since the pandemic began with 4,165 deaths.

Organizers said the lawsuit is solely funded by donations from Ohio citizens. As of Aug. 30, donations reached $34,055. For more information, visit www.ohiostandsup.org.

“We believe that the response to COVID-19 has been the greatest fraud ever perpetrated on the American public,” Renz said in an email press release.

“The objective of this legal action is to force the state to honor the Constitution and to stop the lies, manipulation and fear-mongering intentionally being promoted by public health officials and elected officials.”

The attorneys said they are determined to "restore the Constitutional rights that have been stripped away by the State of Ohio’s unjustified actions regarding COVID-19."

Renz and Gargasz said they will release the extensive evidence that chronicles the case to the public to offer transparency and insight.

“The State of Ohio has consistently lied to and manipulated its citizens from the earliest stages of this pandemic,” Gargasz explained. “We insist that this nonsense end, our rights be restored, and that the actual truth be shared.”

“The entire U.S. economy was shut down based on fraudulent models that predicted 2.2 million American deaths,” Renz said. “The State of Ohio violated the U.S. Constitution with an emergency declaration that ignores the fundamental rights of all Ohioans. As a result, millions of Ohioans are suffering financially, physically, and mentally.”

Renz and Gargasz stated that:

 Hundreds of thousands of businesses are struggling, and many will never re-open.

 Drug overdoses and suicides have increased as have domestic violence and child abuse cases – directly as a result of the unconstitutional emergency order.

 Many Ohioans were unable to get treatment for conditions not related to COVID-19 because hospitals were closed to accommodate the rush of COVID-19 patients who never arrived.

 Children are struggling emotionally as many are forced into the continued isolation of remote learning while two income households must find solutions to manage young children at home.

 Masks are dangerous, prevent proper breathing, and provide no real protection against this virus, according to multiple studies.

 People living alone, of all ages, have been forced into solitary confinement and are dying at tremendously increased rates due to loneliness and lack of self-care.

Gargasz said a rapidly growing number of Ohioans recognize this and understand that, if they don’t stand up and speak out, it could be too late because a precedent has been set.

“There is zero basis for a state of emergency,” Renz said. “Based on what we know about the consequences the emergency order has caused to the physical, financial, and mental well-being of Ohioans, and the vitality of Ohio communities, this is truly a crime against humanity, and it must not be allowed to continue.”