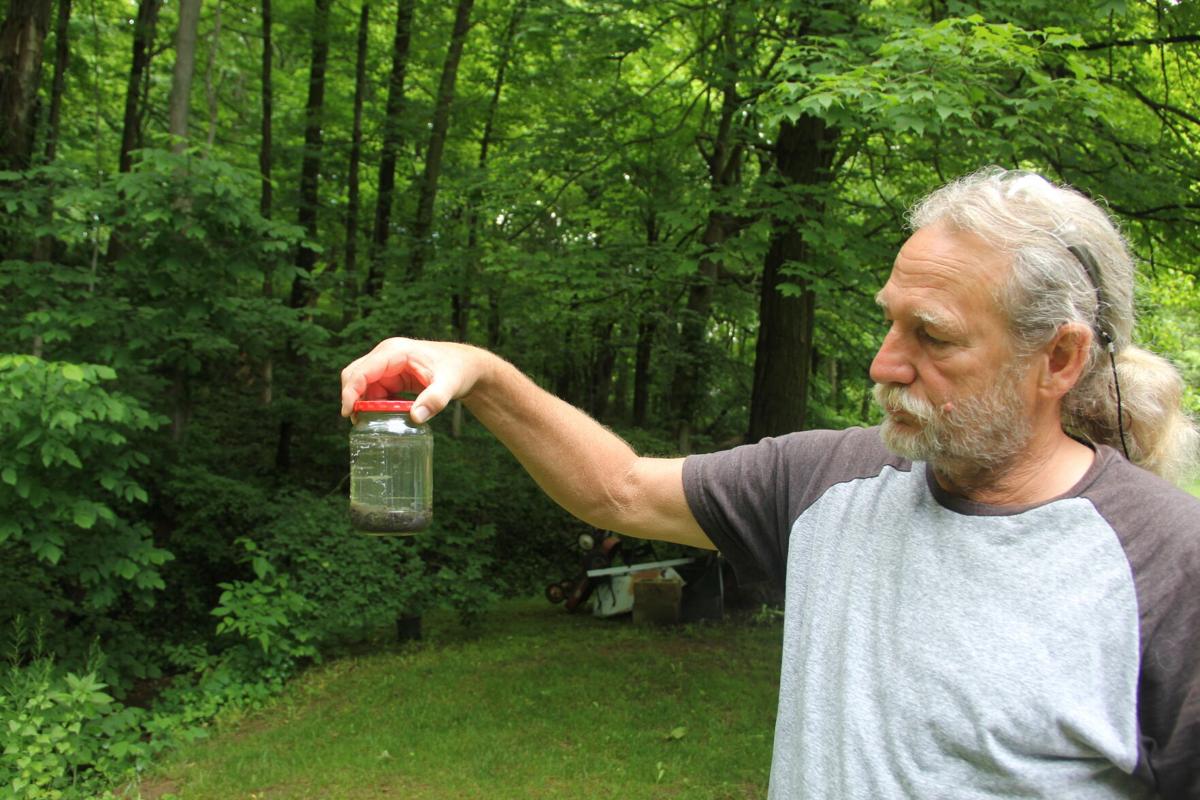 Fred Craig holds a jar up on June 4 filled with water he pulled from an unnamed creek. The bottom of the jar is filled with solids that was discharged from the village's wastewater treatment plant on May 20. 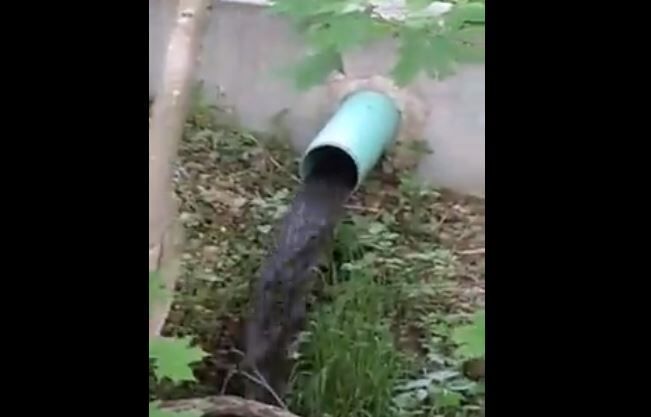 This still photo was taken from a video showing sewage being discharged into an unnamed creek in Mifflin on May 20, 2021. 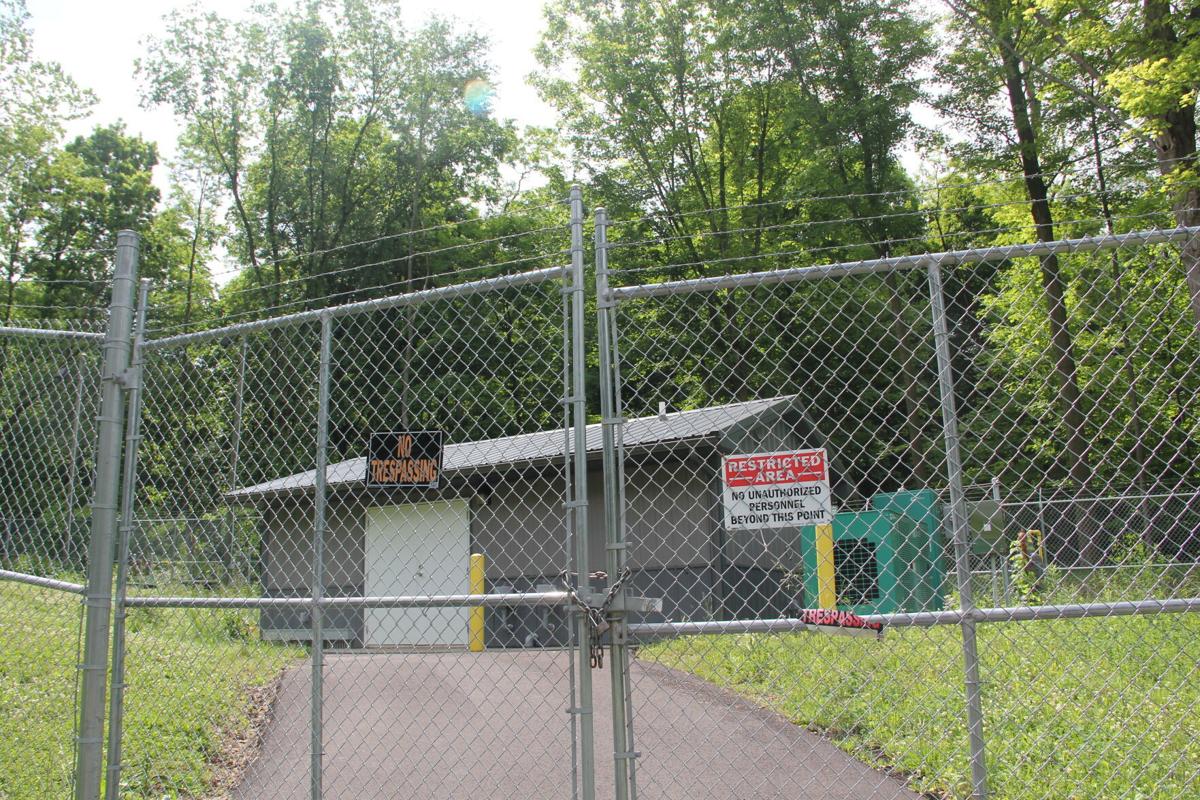 MIFFLIN — Ohio’s Environmental Protection Agency is looking into issues at Mifflin’s wastewater treatment plant following the discharge of an estimated 5,000 gallons of sewage into an unnamed creek last month.

EPA officials confirmed the dump lasted for about an hour on May 20, following the plant’s loss of power the night before.

Tom Abraham, the plant’s operator, reported the power outage and subsequent sewage discharge to the Ohio EPA on May 21. He said around 5,000 gallons was pumped into the creek, but that it’s unclear how much of it was treated or not.

Abraham said the treatment plant lost power through the night, for around 12 to 14 hours. However, the pump station — which pumps sewage to the plant — did not.

The plant, Abraham said, is controlled by a computer. Since it had no power, alarms did not sound to notify him or village officials.

Abraham owns Agri-Sludge Inc, a biosolids disposal and management company based out of Shreve. He was hired by the village of Mifflin two years ago to be the plant’s operator following the May 2019 resignation of his predecessor, Tim Parks.

As its operator, he is required by law to visit the treatment plant at least 1.5 hours per week. The village also employs an individual to check the plant every day Abraham is not there.

On May 20, the individual visited the plant and found the issue. Abraham said he was there within 30 minutes.

“An electrician was there within another half-hour. When we got power, the computer turned on and the pump started pumping (sewage out of the office and into the creek),” Abraham said.

He estimated the office had accumulated around six inches of sewage before it was pumped out into the creek.

Abraham said he could have stopped the sewage from being pumped into the creek. But he said he needed to get the sewer water out of the office before risking electrocution and further, more costly damage to the facility.

“It was the lesser of two evils — discharging something that didn’t meet EPA requirements or potentially take a chance on losing a life. It was a no-brainer for me. I had no choice,” he said.

The unnamed, spring-fed creek serves as a small tributary to Ruffner Run, a stream that flows into Charles Mill Lake, said Fred Craig, a resident of Mifflin who caught the incident on video on May 20.

Once the office was drained, Abraham said he found a company to haul away the remaining sewage in the storage tanks.

In all, the episode cost the village just under $6,000 — which included the electrician’s bill, pumping the remaining sewage into trucks, monthly service fees and work done on other parts at the plant during May.

Village officials approved the payment of the invoice at an emergency meeting June 2.

Two days following the incident, the electrician was able to fix the facility’s electrical issues. About a week later is when the trucks came to empty the storage tanks, Abraham said.

Vickie Schultz, the village’s mayor, did not return a call for comment on this story.

Dina Pierce, an Ohio EPA spokeswoman, verified details shared by Abraham. In an email, she said the agency visited the treatment plant “due to the recent issues” but did not include further details.

The $3.4 million plant first came online in 2017 after the village secured funding from the Ohio Water Development Authority.

Since coming online, it has received four complaints, according to Ohio EPA records. Pierce said wastewater treatment plants are typically inspected once every five years. This one was inspected in April 2019 and again on June 3.

The April 2019 inspection found the plant to be “in significant non-compliance” because of violations that included high ammonia levels in sewage discharges and that other discharges were “odorous, high in solids and foam and reflected incomplete treatment of sewage.”

The report showed 122 violations — which included high levels of ammonia, nitrogen and suspended solids in discharges — during Jan. 1, 2017 and Aug. 1, 2019.

Those issues had been addressed and reversed as of Sept. 23, 2019, when the EPA’s report of its April 2019 inspection was published. Parks, the plant’s former operator, resigned a month after the Ohio EPA’s inspection of the plant. The village then hired Abraham as his replacement.

Craig, 64, of Mifflin was the first to report the May 20 sewage discharge into the unnamed tributary. The creek, which he has nicknamed “Sh-- Creek,” runs through his yard along North Ohio Street. It was one of the reasons he and his wife built a house there around 20 years ago.

“The kids could come up here and play in the water. There used to be crawdads, frogs …” his voiced trailed.

He now has two grandchildren. They live close by.

“I don’t want them playing in it now. I’m worried about this.”

Craig posted a 15-minute video of the May 20 sewage discharge on a Facebook page he created. The video has received more than 6,000 views.

“They don’t like me. I know they don’t. But we need this fixed,” he said, referring to village officials.

Craig fears the EPA will fine the village, which he thinks will result in increased rates that currently sit at $43.50 per month for residents and around $80 per month for businesses.

“If I have to publicize this every day so that it gets fixed, I will,” he said.

Abraham said he is “actively working with the facility’s designers to prevent that from happening again.”

He declined to offer specifics until he gets further guidance from the Ohio EPA, which he expects will issue a letter outlining next steps to the village soon.