The commission, acting at the request of Gov. Mike DeWine, adopted the rules on July 31 as part of the state's efforts to curb the spread of coronavirus, a move the state's bar and restaurant owners have said is crippling their businesses.

Last week, a group of local bar/restaurant owners met with Richland County commissioners and presented a petition signed by 32 owners seeking an end to restrictions that ban alcohol sales after 10 p.m. and order bars closed at 11 p.m.

"I would like to see the governor repeal the order or modify it substantially," Obhof said. "If he did that, it may alleviate the need for the legislation. Frankly, I had expected the order to be repealed by now.

"We will introduce the bill, give it the legislative process and by the time we get through that process, we will see whether it's still necessary," the Republican from Medina County said.

Obhof said he would have at least a dozen co-sponsors when the bill is introduced into the Senate.

"Hundreds of thousands of Ohioans are employed in the restaurant industry. Ohio’s restaurants and bars have suffered immensely from the effects of the COVID-19 pandemic and the restrictions placed on their industry by the state’s response," Obhof said.

"According to a recent survey by the Ohio Restaurant Association, more than half of all Ohio restaurants anticipate being forced to close down if current restrictions continue. Over 80 percent of such businesses anticipate being unable to break even for the year, and many have already been forced to permanently close," he said.

At the end of September, DeWine said he has heard the complaints from bar and restaurant owners.

“I get it. I understand that. I have close friends who run bars. And I know this is tough for them," DeWine said, adding that changing the order to allow later sales must be a balance of the health of Ohioans against the health of business. 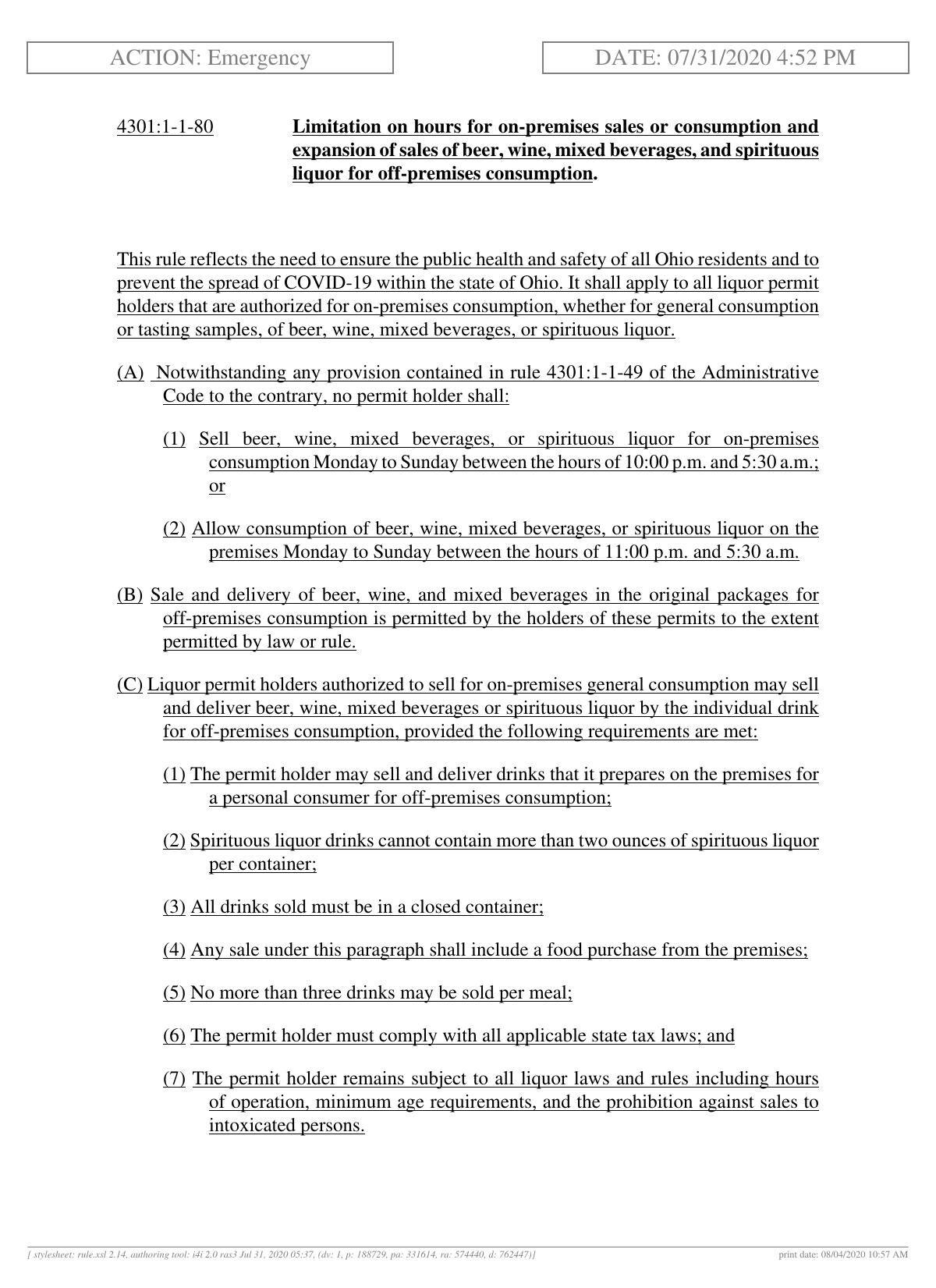 At the time he signed the emergency order, DeWine said the restrictions were better than shutting the businesses down, as he did in March when the pandemic reached Ohio.

"The businesses can stay open – but we believe that stopping alcohol sales at 10 o’clock for onsite consumption will help thin out the crowd and help slow the spread," he said in July.

"The problem is, bars, by their nature, lend themselves to a revolving door of people in close contact, oftentimes indoors. Patrons either stay at one location, sometimes for hours or bar hop. Either way, they interact with many different people - especially the younger crowd," the governor said.

Obhof, who said he hopes to have bipartisan support for the bill, has questioned the "science" behind DeWine's 10 p.m. curfew.

Onhof said the state's food service industry has stepped up during the pandemic, which has caused 4,970 deaths in Ohio, according to the Ohio Department of Health website, updated Wednesday afternoon.

"We have seen countless examples of innovative solutions to promote social distancing and safe dining. The industry, however, is facing potentially irreparable harm from the continued application of the Liquor Control Commission’s cutoff times for sales and consumption," Obhof said.

"These establishments have purchased liquor permits, which permit them to conduct sales within the timeframes already laid out in the Ohio Revised Code. Thus, this bill will protect the pre existing property rights and statutory rights of permitted establishments," Obhof said.

The Senate president said the basis for DeWine's rule is unclear and the curfew "is inconsistent with the recommendations of the administration’s own restaurant advisory group."

"Of course, many of us also question whether an agency or commission may promulgate rules that directly contradict (state law). However, whether it is valid or not, the rule is currently being enforced, and we believe it is prudent for the legislature to repeal it," Obhof said.

He said his planned legislation would also end any state disciplinary actions based upon a liquor permit holder’s alleged violation of the rule, so long as that business otherwise operated in compliance with the applicable liquor permit.