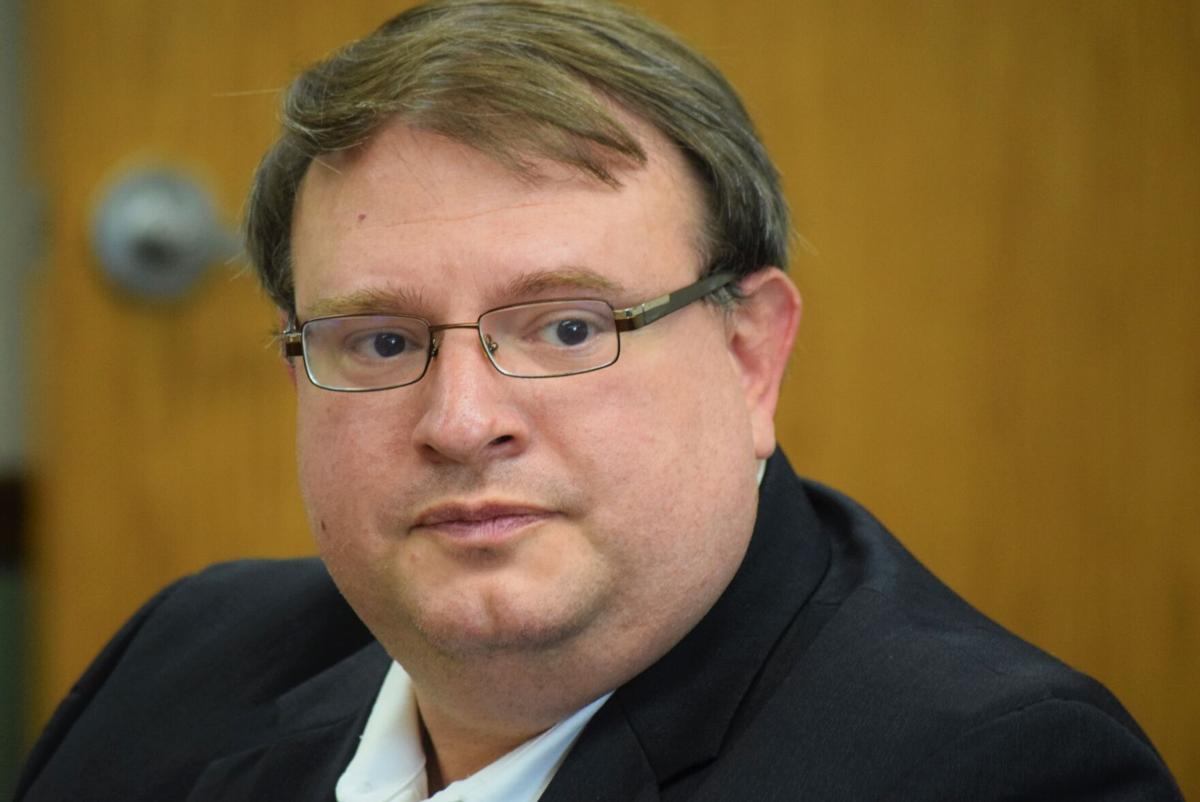 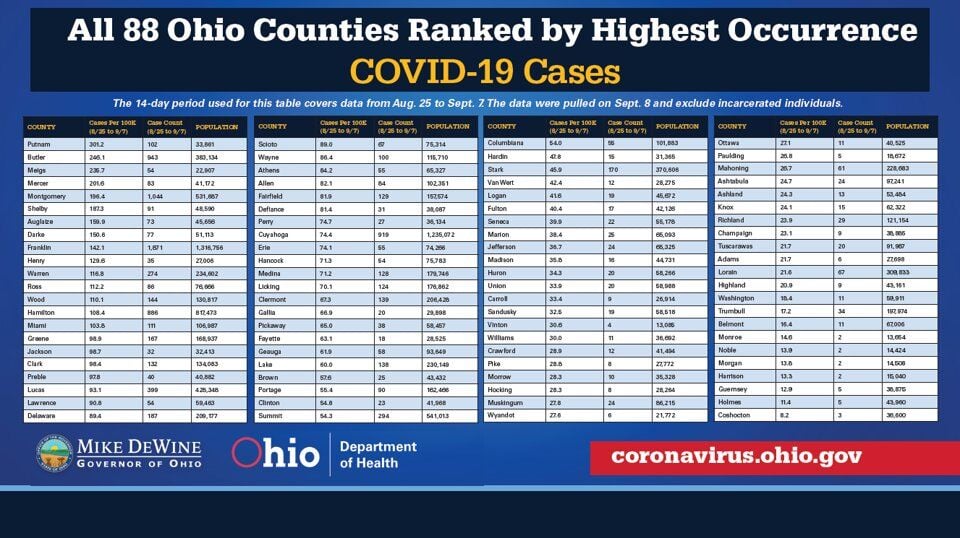 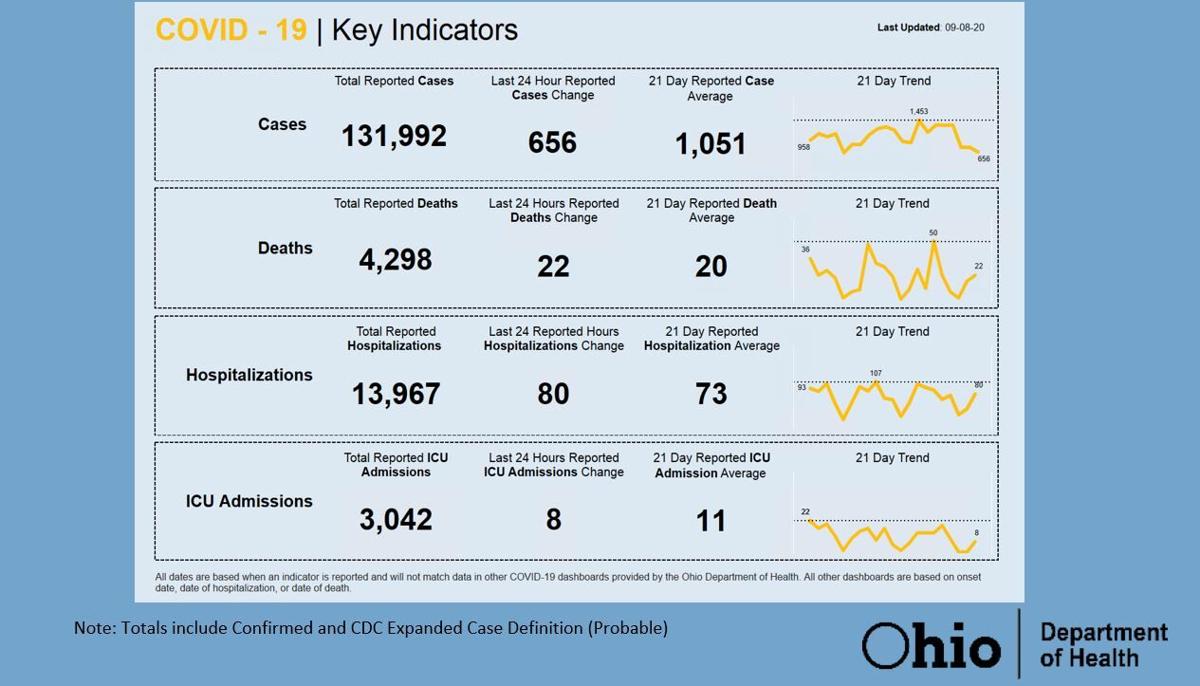 "I believe the goal posts have moved," the Republican from Medina told Richland County commissioners on Tuesday morning. "I think we were all focused in March and April on keeping the number of people who contracted the virus below the hospital system's capacity to deal with it."

He pointed to the goals of "15 days to flatten the curve" and "30 days to slow the spread" put forward this spring by DeWine and then-state health director Dr. Amy Acton.

On Aug. 27, commissioners expressed similar frustration, citing a lack of information from the DeWine administration.

"I think the administration has now shifted to trying to get to zero infections across the state, which is unattainable. I believe that the trade-off economically, and frankly, with our freedoms no longer makes sense the way that perhaps it did on a very short-term basis in March," said Obhof, whose 22nd District includes Richland, Ashland and Medina counties, as well as a portion of Holmes County.

"Somewhere along the line, not just in Ohio, but around the country, the conversation has shifted to 'Let's make sure as many people as possible don't get sick. Nobody can get sick until we have a vaccine and everyone's taking it.'

"I don't think that's viable. I don't think that can be the end goal because for all we know it'll be two years before we have a vaccine, if there is a vaccine. It could be like the flu vaccine, which sort of works for some people and doesn't work for a number of people and you have to take it every year," Obhof said.

COVID-19 numbers have declined locally and Richland County has been ranked as "yellow," or level one, for the past three weeks in the state's Public Health Advisory System.

Ashland County has been ranked level one every week since the rating system began in July.

Obhof, who leaves office at the end of the year due to term limits, said the Senate has passed several pieces of coronavirus-related legislation this summer that the Ohio House has declined to act on, or even accept, including bills that would limit the authority of DeWine and his state health department.

"We know so much more about (coronavirus) than we did in March and April. We really ought to be changing our policy prescriptions, to match our ability to deal with it," Obhof said.

"I think that you will see that happening, but again, if you look at Ohio compared to other states, instead of in a vacuum, I think we've done a much better job than most of our neighboring states economically and in preventing the spread of the illness, certainly compared to Michigan, Pennsylvania, Kentucky, Illinois and Wisconsin," Obhof said.

Commissioners asked Obhof when he thought DeWine would loosen continuing restrictions, including the requirement that bars/restaurants limit the number of customers they can serve at one time and stop selling alcohol at 10 p.m., as well as limiting attendance at sporting events.

DeWine has said the economy is 98 percent re-opened after the statewide shutdown in March. During his Tuesday press conference, governor repeated that masks "work" and that his administration would continue to rely on the medical community for its COVID-19 policies.

Obhof said, "There is still a lot more work to do because re-opening of businesses and functioning is not the same as functioning at full capacity and hiring as many people as they had before and paying them what they were paid before and being as productive as they were before.

"I think the numbers look deceptively better than they are," said Obhof.

The veteran lawmaker did say the state's jobless rate, which peaked in 17.6 percent in April, has dropped to 8.9 percent and "we've consistently added jobs every month since then.

"I think that's because, while we have had more restrictions than I would have frankly preferred, we've also been smarter and better than what we have seen in some other states," Obhof said.

"I think we should be doing as much as we can right now to try to return to normal life with the understanding that there are things that you need to do. Wash your hands regularly. If you're going to be surrounded by people, it's probably a pretty good idea to wear a mask.

"I personally don't believe any level of government has the ability to tell you to do that, but I do think it's a good idea for people to do that when they're in large groups and they're close together," Obhof said. "Be more cautious and more careful about good hygiene and not coming in contact with people who might have a preexisting conditions that make them a much higher risk category for (COVID-19)."

Lawmakers in the Ohio House and Senate last week approved HB 272, which would limit the state health department's "ultimate" ability to issue orders, including protections against cancelling/postponing elections or closing churches.

The bill was sent to DeWine on Sept. 3 and Obhof said he believed the governor will sign it into law.

"If he doesn't, I think you will see a strong push from members of the Senate to enact (the bill) over the administration's objections," he said.

On other topics, Obhof said:

HOUSE BILL 6: Signed into law in July 2019, the energy law has been tainted by a federal corruption scandal, including the indictment of former House Speaker Larry Householder on bribery charges.

"I would like to repeal it (but) I believe that it was the right policy," Obhof said. "The Senate version of the bill was very different than what the House sent us. We had dozens of pages of amendments. We cut the size of the subsidy substantially by tens of millions of dollars. We added an audit provision that would have required annual audits of what was actually necessary in order to keep the plants open so that they wouldn't get the subsidy if they didn't need it, or they would get a smaller subsidy, if that's all that was necessary.

"The question remains, would you have passed that bill if you knew in June of 2019, what you know now? And I think the answer is absolutely not. So why don't we hit the reset button and go back to where we were in June of 2019? And if we have changes that we want to make an energy policy, then let's look at those," Obhof said.

"I think most of the legislature thought that the final version of the bill was a good bill. For me, I think that's a secondary question to the origin of the bill and the things that are alleged to have gone on that led to his passage," he said.

Strong Ohio: During his twice-weekly press COVID-19 press conferences, DeWine has repeatedly called for lawmakers to take up his Strong Ohio bill that was introduced last October. According to DeWine, the Strong Ohio bill is designed to protect citizens from gun violence while also protecting the rights of Ohio’s law-abiding citizens.

"We're not going to pass gun control (legislation)," Obhof said. "There were 17 different recommendations (DeWine) made and (the Senate) actually did do some of them already as stand-alones that haven't made their way back through the other chamber, related to mental health and availability of additional beds for people need treatment.

"Some of the things that the governor proposed involved increasing penalties for people who were committing violent offenses or drug trafficking while in possession of a firearm. So there are individual parts of that that we can  take a look at, but do I see any large substantial bill that involves gun control elements? Probably not. That doesn't mean that we wouldn't be able to individually assess some of those issues on their own merits," Obhof said.

VIOLENCE TIED TO PROTESTS: Protests against police brutality and systemic racism have seen violent activity in some U.S. cities.

"You don't have a 1st Amendment right to commit property destruction or to vandalize anything or to harm anybody," Obhof said.

"And we have plenty of laws against that now. So legislatively, I'm not sure there's anything that needs to be done. It's a matter of enforcement. If people plan on committing acts of violence in Ohio, they should also plan on getting arrested and being prosecuted."

POST-SENATE PLANS: Obhof said he plans to return to the full-time private practice of law when his Senate career ends in 115 days.

"I've never really felt like I needed to jump from one office to another. If the right thing came along that interested me or if there was ways that I thought I could help the community, I would certainly consider those," Obhof said.

Richland County has recorded its 18th death due to COVID-19, according to public health officials.