COLUMBUS -- Leaders in the Ohio Senate on Thursday introduced a bill to repeal Gov. Mike DeWine's curfew imposed on the state's bars and restaurants in a stated attempt to curb spread of COVID-19. 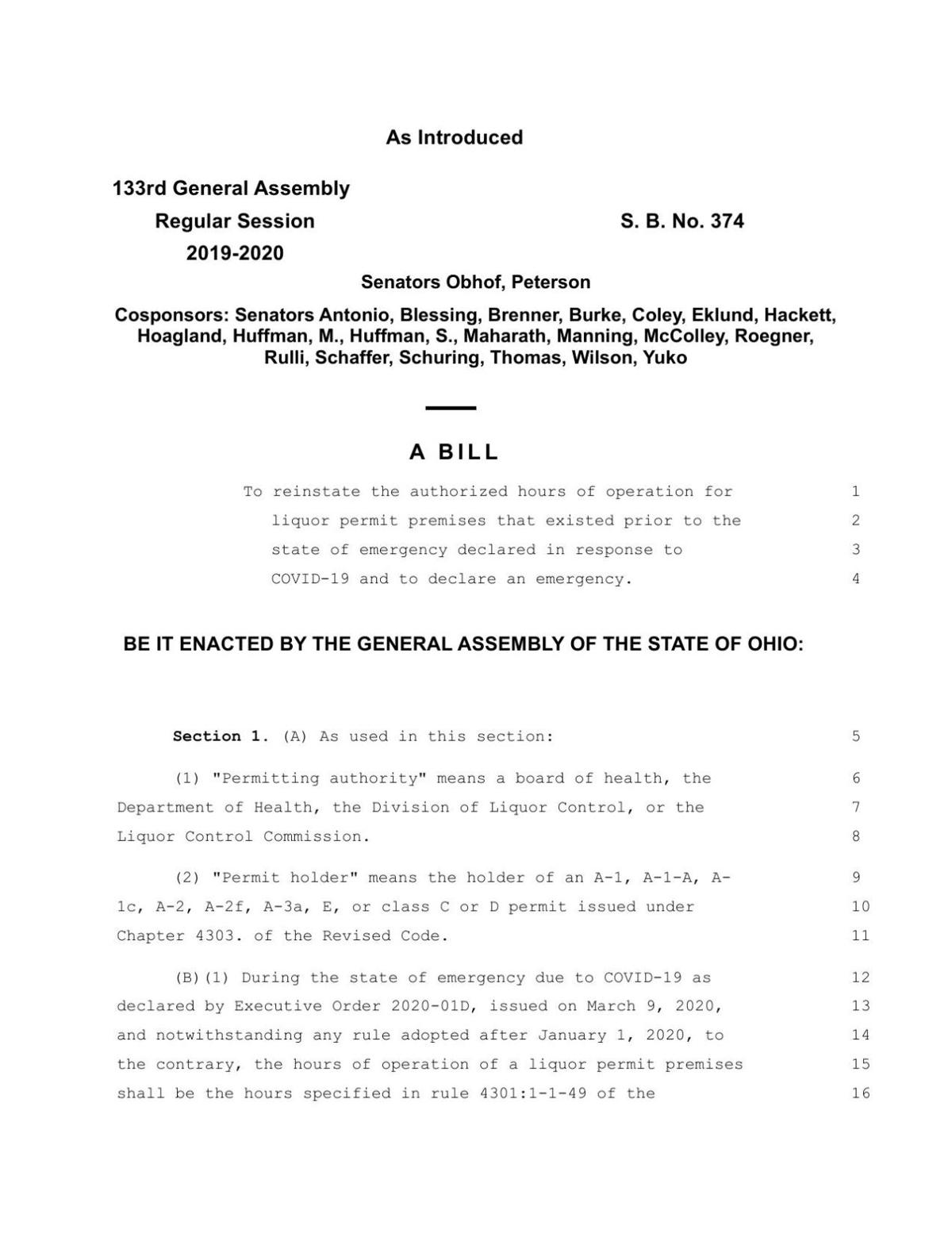 “Ohio’s restaurants and bars have suffered immensely from the restrictions placed on their industry during the COVID-19 pandemic,” said Obhof, whose district includes Richland and Ashland counties.

“In order to survive, we have seen them step up during this crisis and find innovative ways to safely serve their customers and keep hundreds of thousands of Ohioans employed," Obhof said.

"These are our friends, our neighbors, and leaders in our communities, and Senate Bill 374 will help them keep their jobs and their doors open," he said.

In September, a petition signed by 32 Richland County bar/restaurant owners was presented to county commissioners, seeking an end to restrictions imposed almost three months ago.

Tom Zellner told county commissioners it feels like Dewine has singled out the bar business in the battle against COVID-19.

Peterson said bars and restaurants, "many of them family-owned," have proven their ability to ensure safe dining and a safe workplace.

“My colleagues and I are firmly committed to removing unnecessary and stifling regulations on those who are responsibly working to provide for their families, employ their fellow Ohioans, and play an important role in our economy’s recovery," Peterson said.

According to a recent survey by the Ohio Restaurant Association, more than half of all Ohio restaurants anticipate being forced to close down if current restrictions continue. More than 80 percent of such businesses anticipate being unable to break even for the year, and many have already been forced to permanently close.

Senate Bill 374 will protect the existing property and statutory rights of Ohio’s establishments that hold liquor permits, which permit them to conduct sales within the timeframes already laid out in the Ohio Revised Code (Section 4303).

The bill will also prevent any disciplinary actions resulting from a permit holder’s alleged violation of the July 31 rule, provided the business otherwise operates in compliance with their liquor permit.

Obhof said the bill has "strong bipartisan support" with 22 of the 33 state senators signed on as co-sponsors, including Sen. Kenny Yuko, the leading Democrat in the Senate. He said several members of the Ohio House have also expressed support of the legislation.

"I would like to see the governor repeal the order or modify it substantially," Obhof said last week. "If he did that, it may alleviate the need for the legislation. Frankly, I had expected the order to be repealed by now.

"We will introduce the bill, give it the legislative process and by the time we get through that process, we will see whether it's still necessary," Obhof said.

During his Thursday press conference, DeWine said he planned to speak with lawmakers next week on steps that could be taken to assist the bar/restaurant industry.

Based on rising spread of the coronavirus across the state in the last several weeks, the governor didn't sound optimistic about lifting the order.