ASHLAND -- A jovial Ashland County Dog Warden volunteer, on a sweltering day in May, happily pointed out the blemishes of a building she has faithfully helped operate for a decade.

“If people saw this, maybe they’d understand why we’re wanting a new spot,” said Veronica Negrey, her voice partially muffled by a cartoon-dog-emblazoned mask and the whirring of an industrial air fan.

Negrey said the fan, recently donated, is a “God-send” that helps circulate the building's pungent air, especially during hot days.

The 73-year-old Ashland woman began her volunteer work at the Ashland County Dog Warden’s building, which also operates as the county's only dog shelter, shortly after retiring in 2011.

But thanks to a recent fundraising campaign from nonprofit organizations and a partnership with Ashland County Commissioners, she and the shelter’s staff could move into a new shelter along Baney Road in the next year.

The current nondescript structure was built in 1953 as the county’s dog pound, where dogs were temporarily housed until they were reclaimed by owners or euthanized. Adoption was not yet a possibility in those early days.

Today, the Garfield Avenue site serves as office space for Joe Eggerton, the county’s dog warden, two other staffers and kennel space for around 26 dogs.

The building is crumbling. County commissioners have paid for various repairs, but it has become too costly to maintain, said Denny Bittle, president of the Ashland County Commissioners. 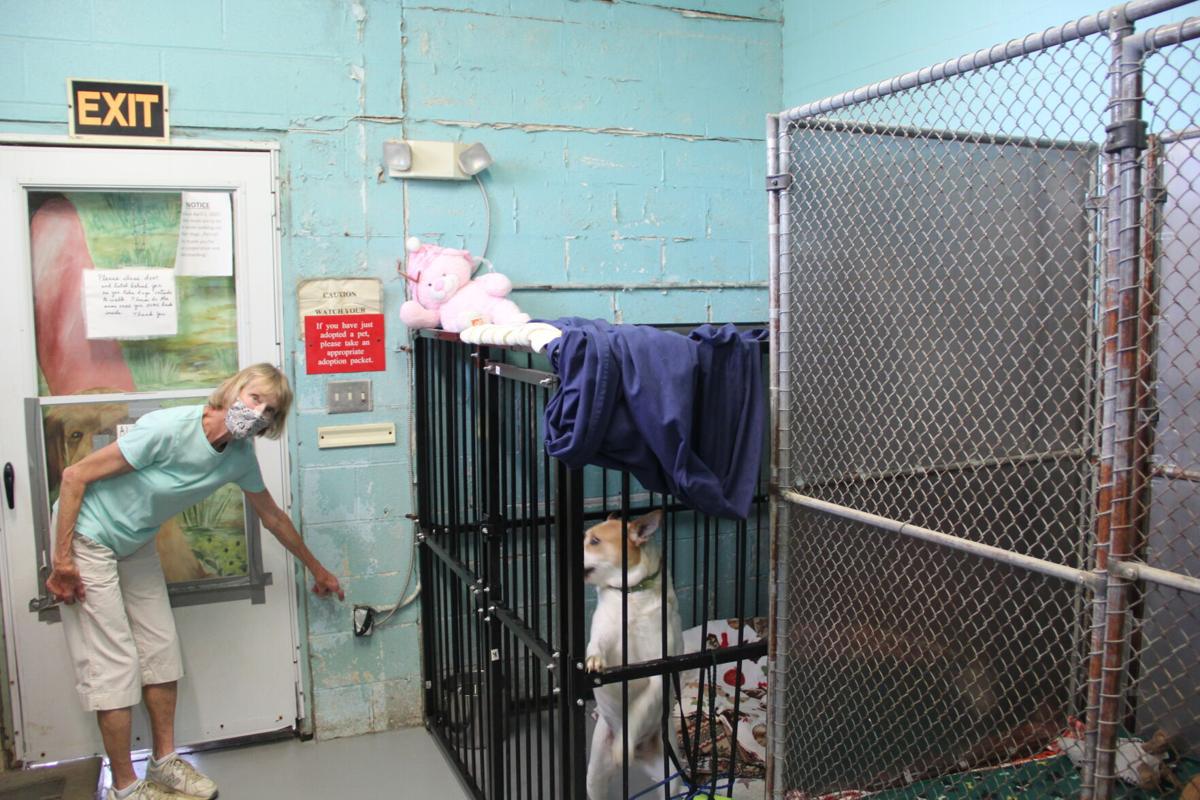 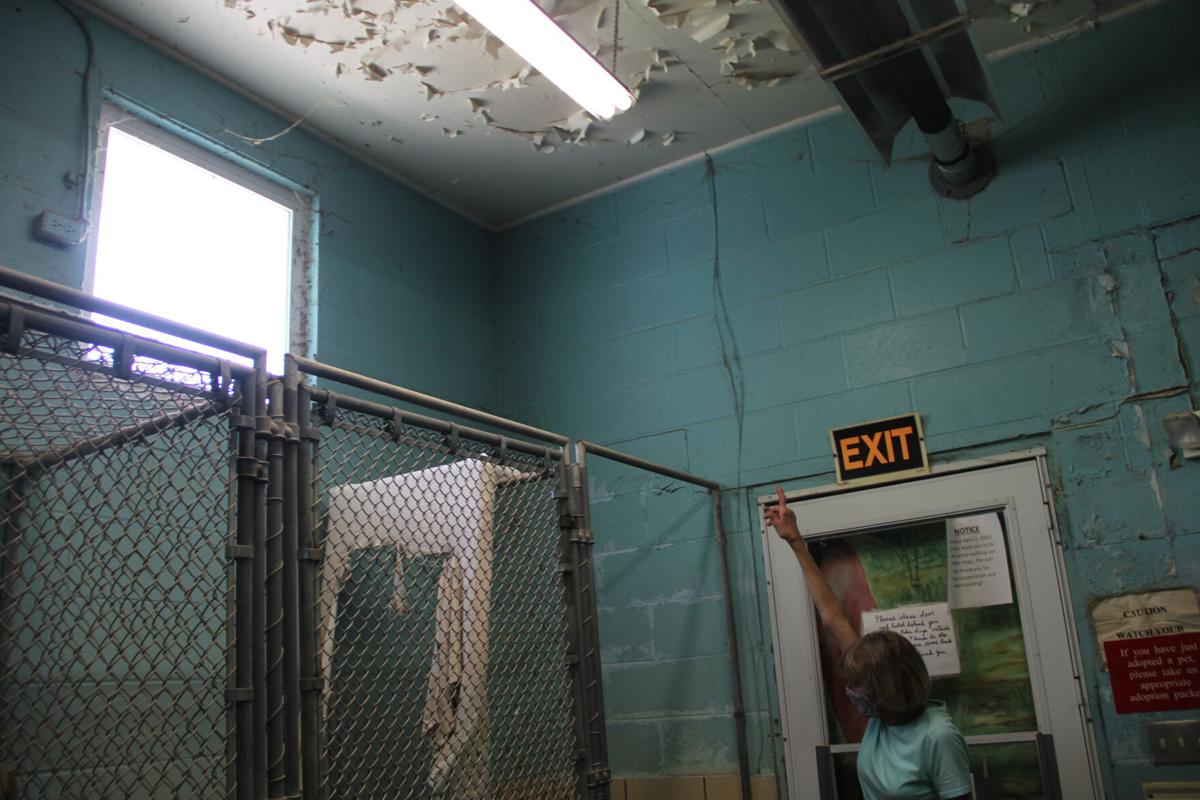 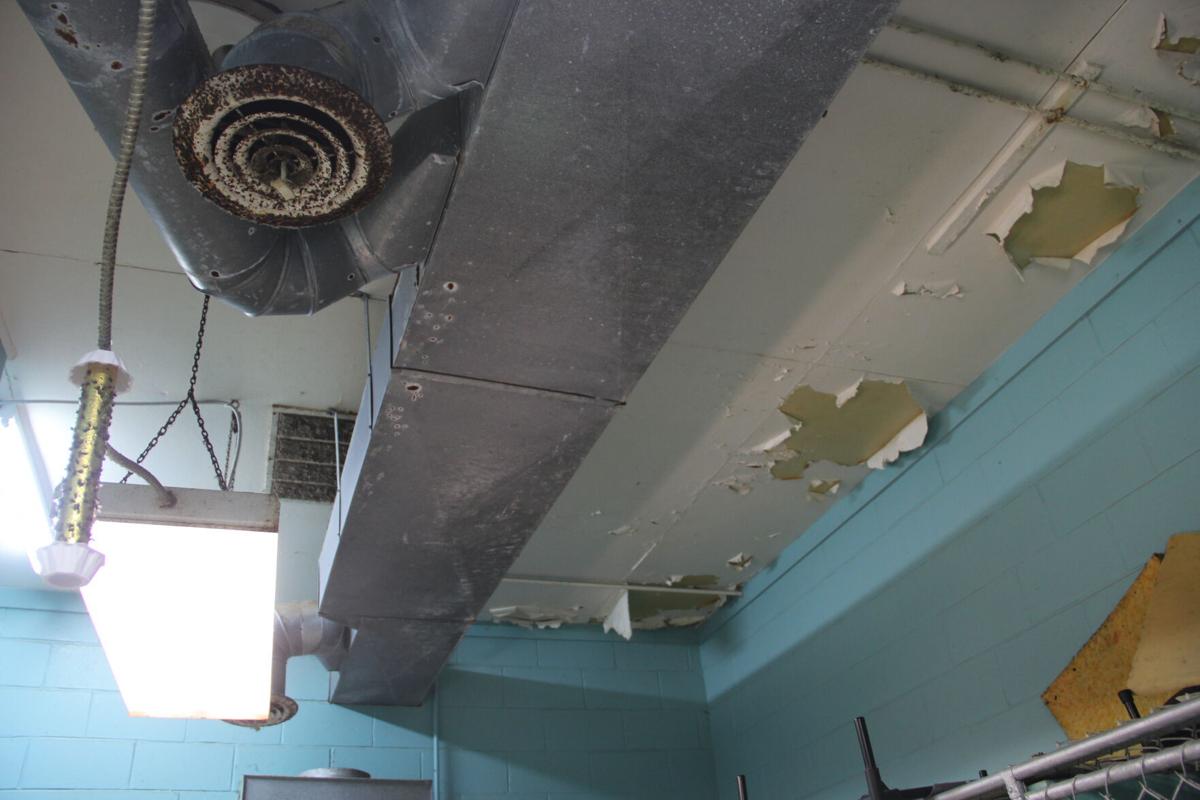 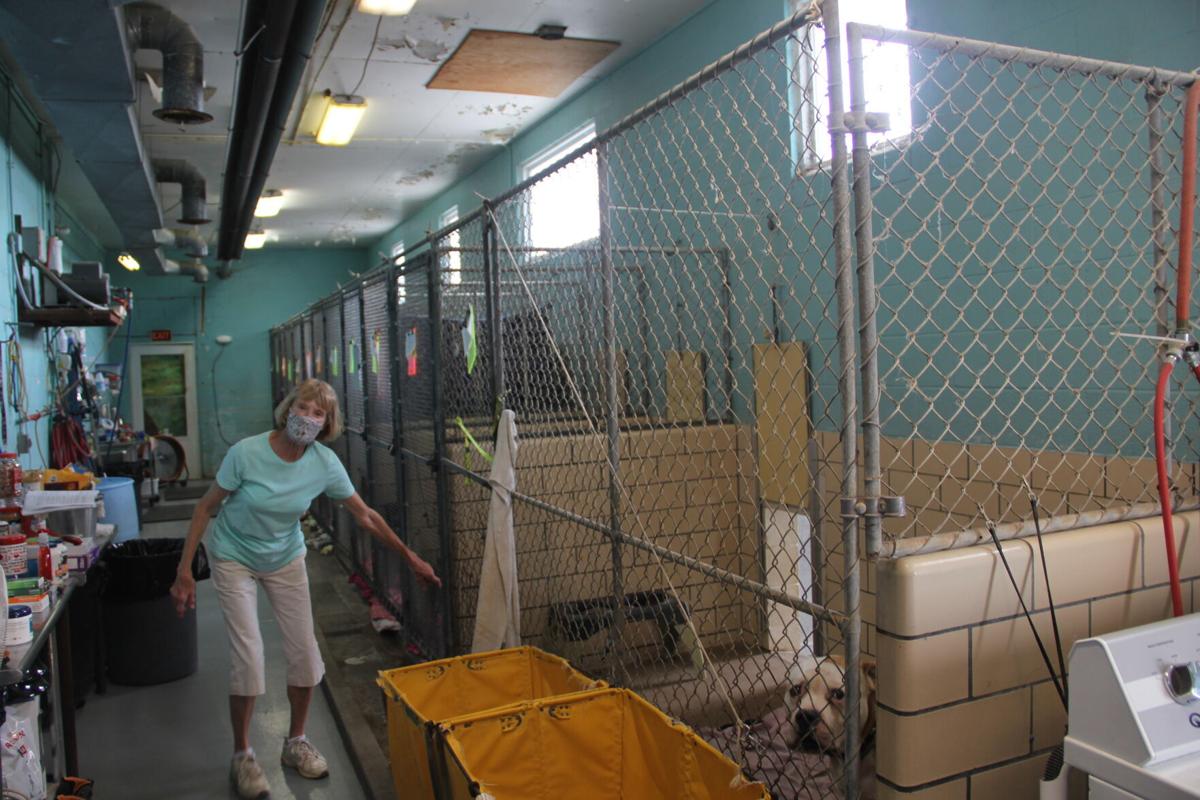 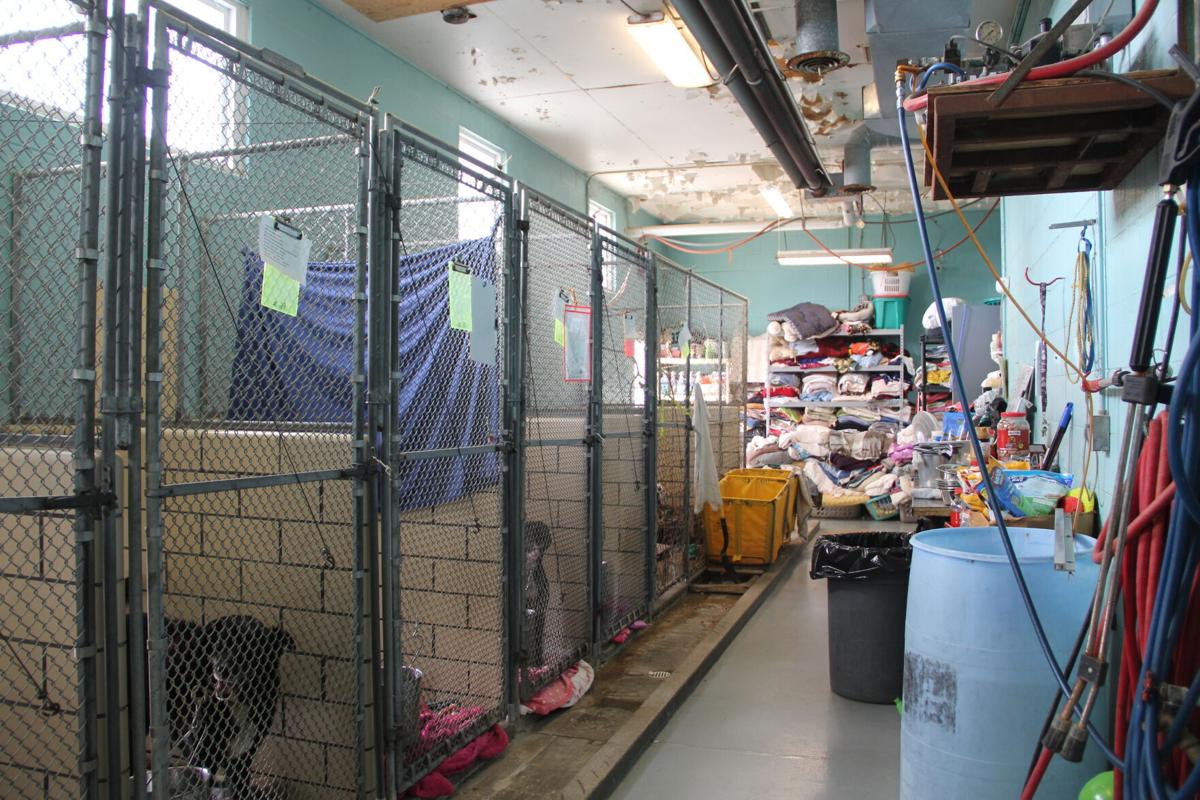 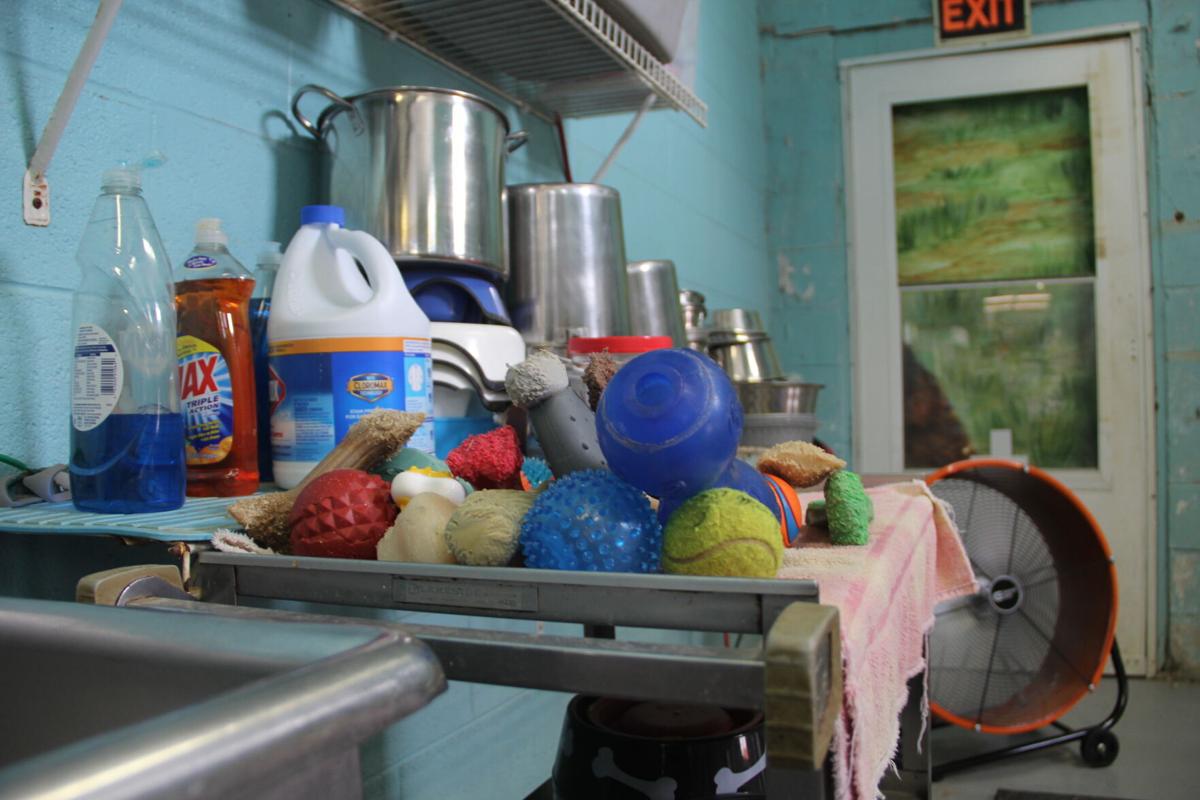 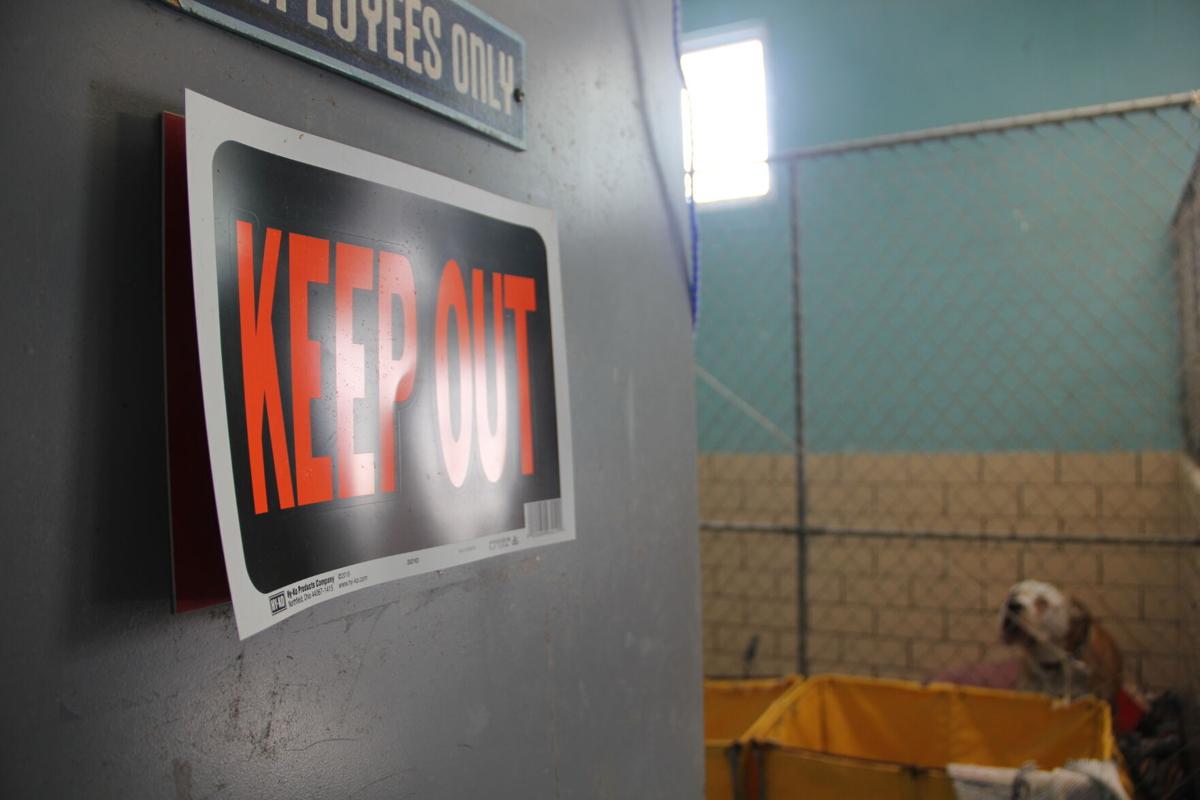 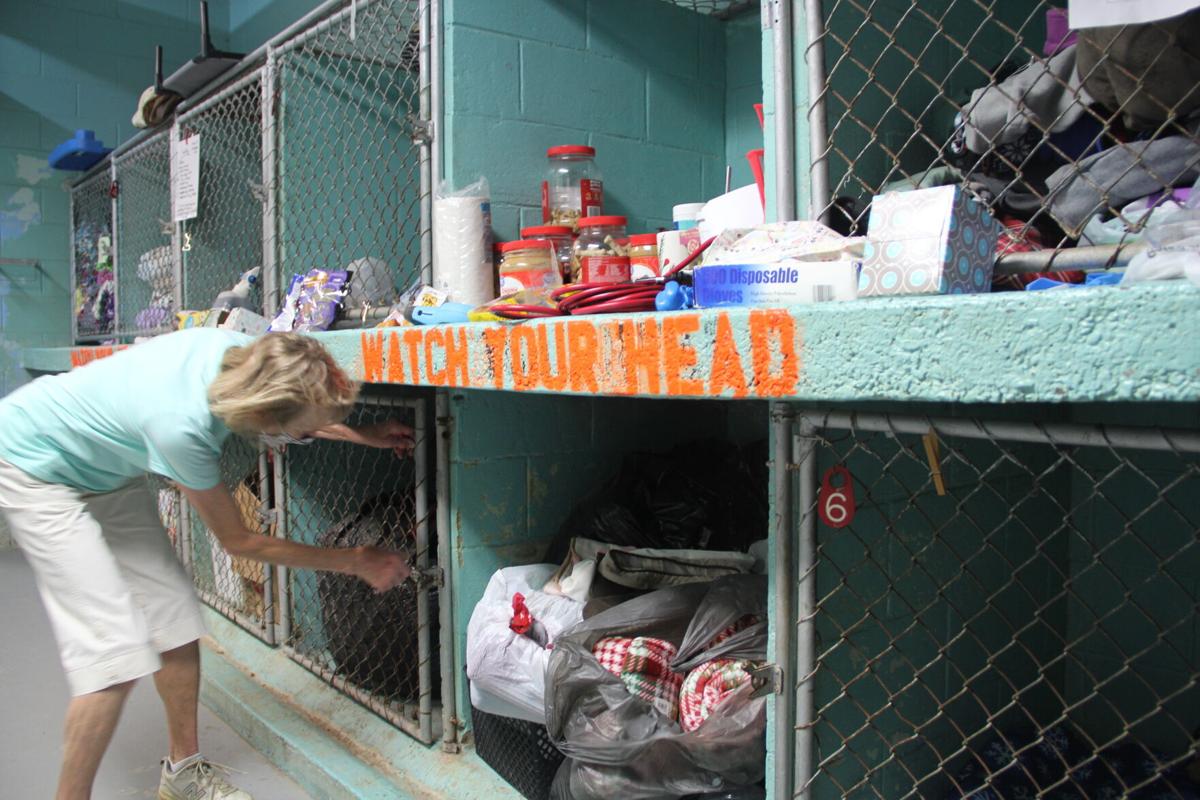 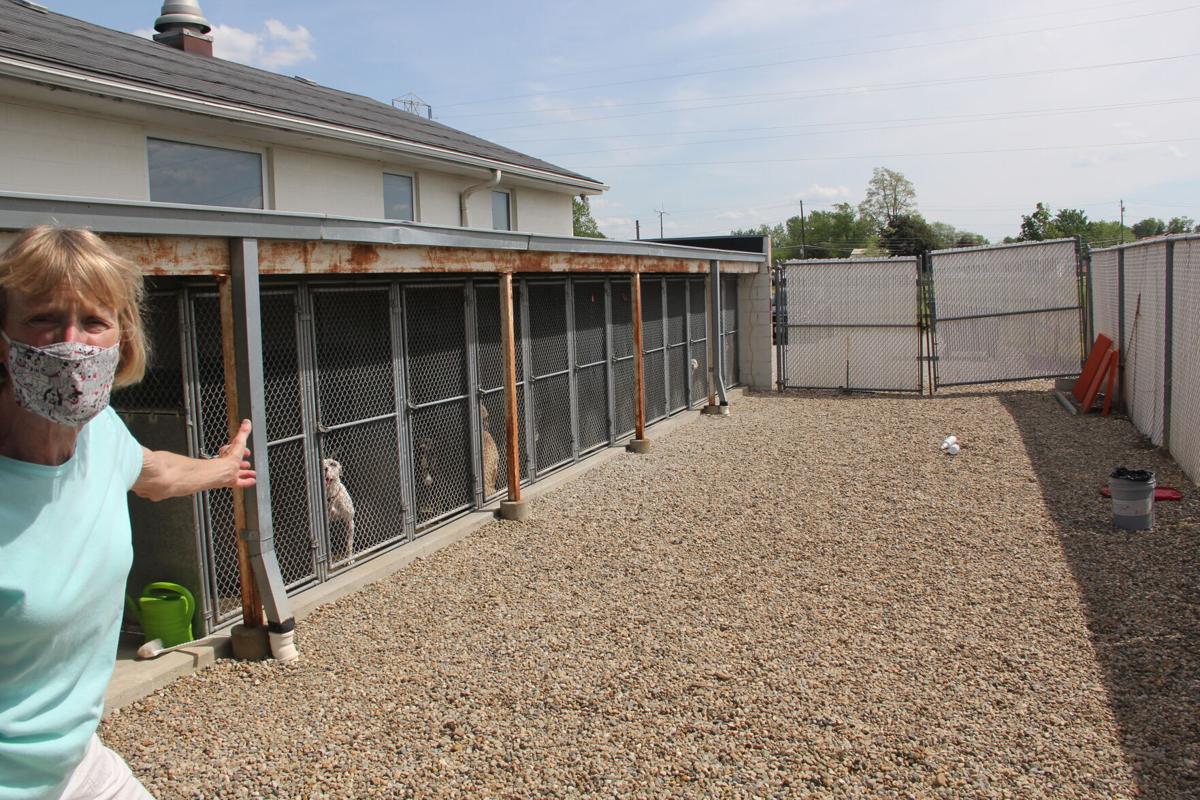 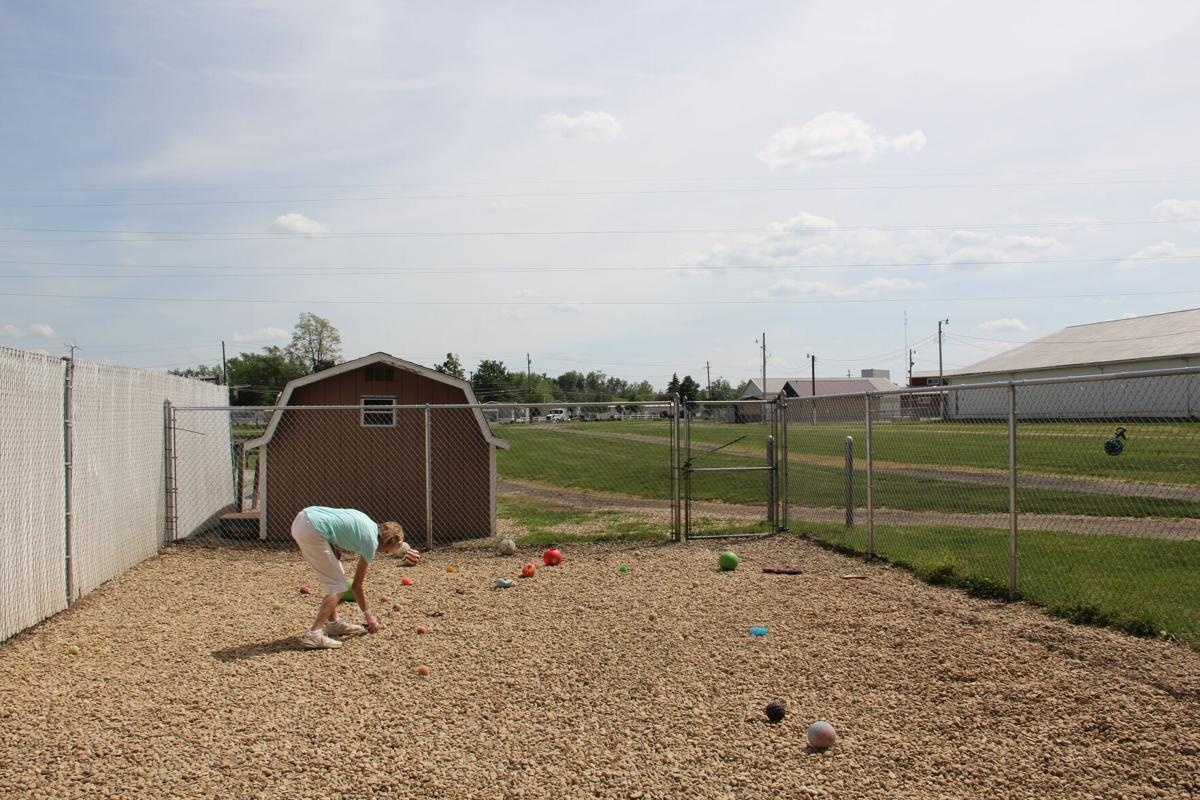 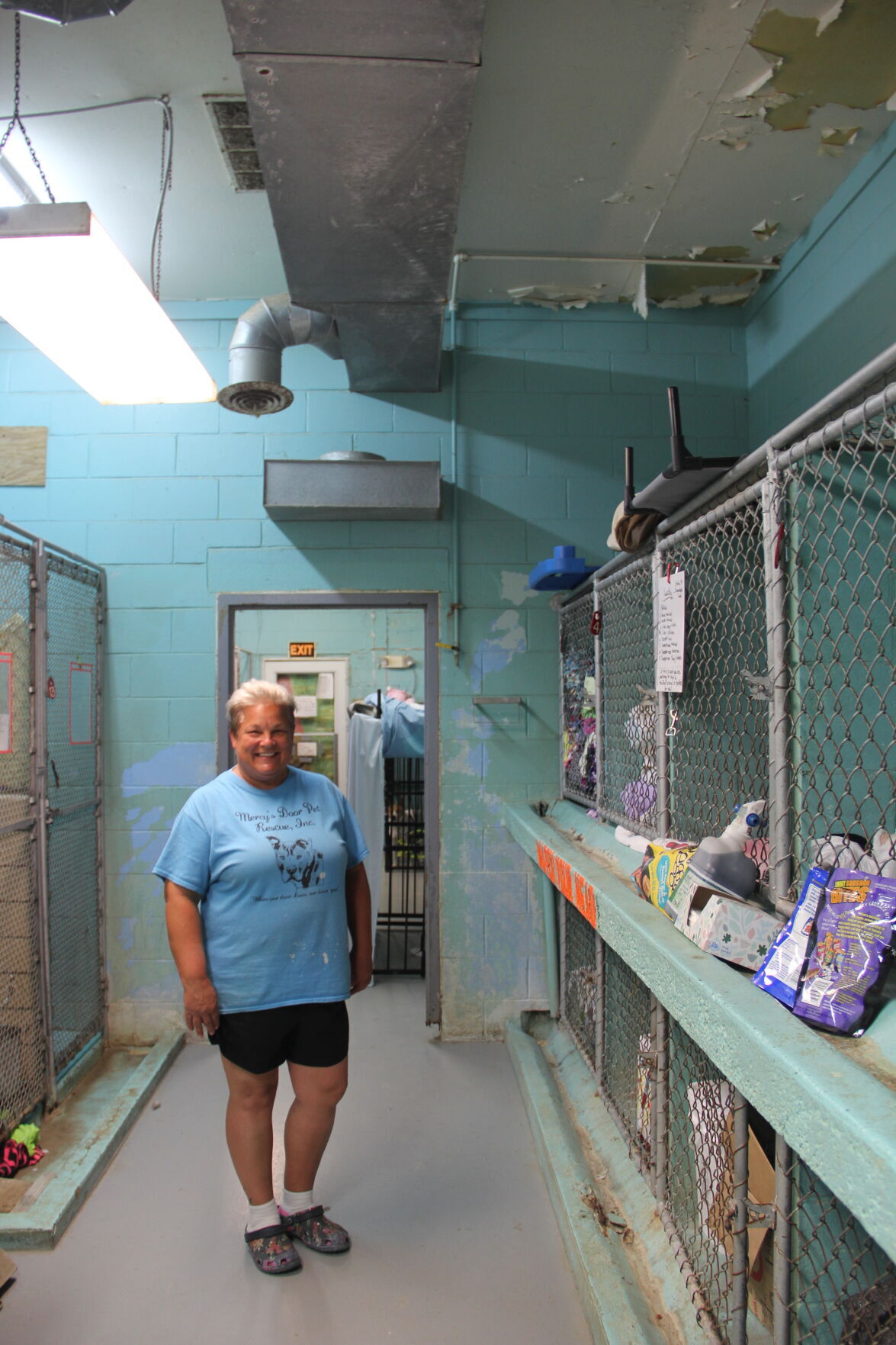 Krissi Fussner, the shelter's manager, stands in a hallway of the shelter for a portrait on May 21, 2021. 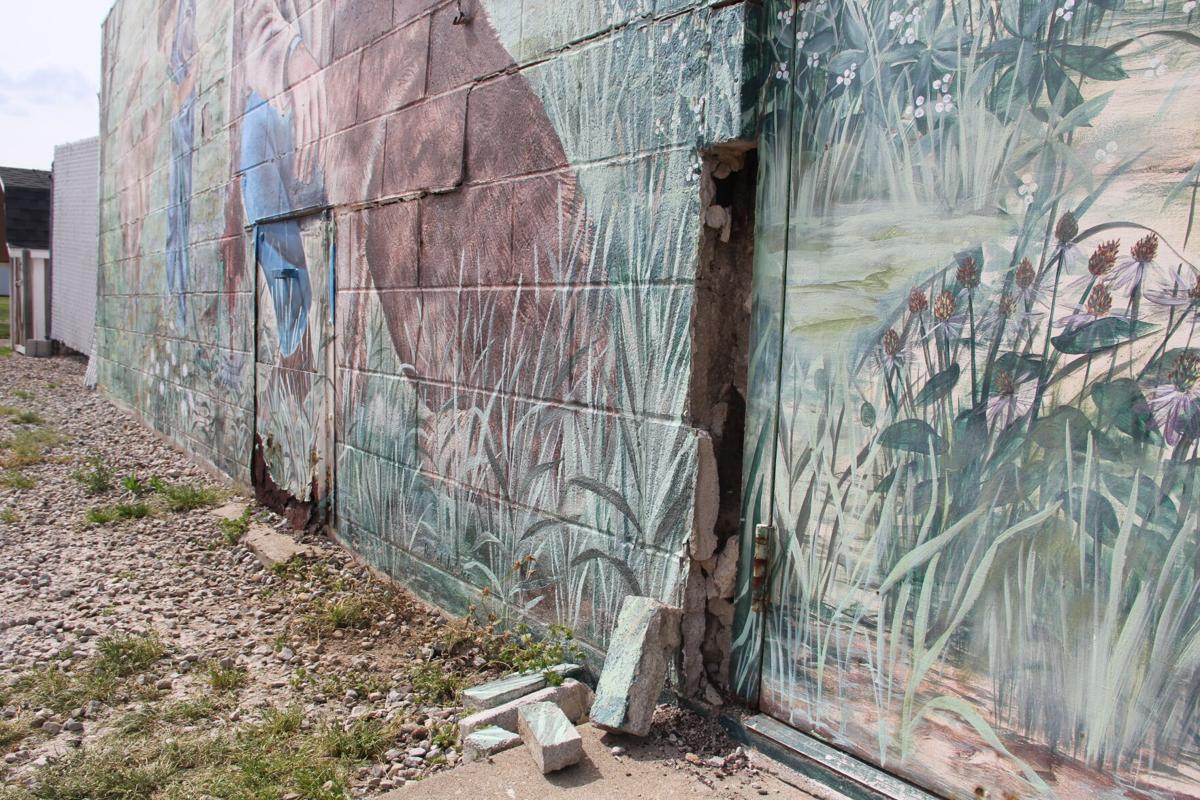 Veronica Negrey, a volunteer at the Ashland County dog shelter, points out the facilities blemishes on May 21. The building has been in disrepair for years, serving as motivation to build a new one nearby.

Krissi Fussner, the shelter's manager, stands in a hallway of the shelter for a portrait on May 21, 2021.

The American Society for the Prevention of Cruelty to Animals estimates 3.3 million dogs enter shelters as strays each year. Less than half, 1.6 million, are estimated to be adopted.

The ASPCA estimates 710,000 dogs, yearly, are returned to their owners after being entered into a shelter as a stray. About 670,000 are euthanized.

In Ashland, most of the dogs that are sheltered are strays. Most are reclaimed by the owners or adopted. But the adoption rate at the shelter could be better, said Krissi Fussner, the shelter's manager.

Fussner said the building is not the best environment for stray dogs who oftentimes stay there for months or years before being adopted.

“When a dog shelter is designed properly, dogs get re-homed,” she said. Fussner has worked for the county for around three years. Her life is defined by her love for stray dogs; she’s operated a pit bull rescue out of her home since 2012 and wears a conspicuous tattoo of a dog’s paw on her forearm and the phrase “Be their voice.”

She said the current building, with its close quarters and noise-amplifying walls, leads to high-stress levels in the dogs.

“It’s a very stressful environment for them,” she said, citing veterinarian studies that link stress in dogs to behavioral and medical issues. Those issues often lead prospective adopters elsewhere, she said.

The shelter does not euthanize animals any longer, unless it is deemed dangerous by the warden. Instead, owners have 14 days to reclaim their pet, after paying a $30 fee. If that doesn’t happen, dogs are put up for adoption.

“The longest we’ve had a dog here before it was adopted was two years,” Fussner said.

A group of fellow canine lovers and the community recently donated $600,000 to the county commissioners to cover a significant portion of construction costs for a new building.

Commissioners have yet to officially accept the donation because of a legal process that must happen, Bittle said. The president also said commissioners are working on authoring a small contract to solidify the county's role in the project.

"Believe me, this isn't a project that's on the back burner," said Commissioner Michael Welch, when asked about a timeline for accepting the donation.

Ashland County owns the building and employs its staff. The government relies on volunteer organizations, such as No Pawz Left Behind, to operate the shelter.

Commissioners have said there are no plans to change staffing once the new building is constructed.

The money is earmarked for construction of a new building. An endowment fund — used to operate the new shelter — has also been established. It currently has around $150,000, but could increase to $225,000 after matching goals are met.

Bittle said he is eager to get started on construction. The need for a new shelter has been on the county’s radar for years, he said.

“But financially, it just wasn’t feasible,” he said. “So this was the best way to handle this. We’re all really happy with the end result. I’m happy the community stepped up in a big way to help out with this project.”

To solve the funding issue, a group of people formed Homeward Bound around three years ago. The organization is a nonprofit created specifically as the shelter’s fundraising arm, said Jim Cutright, president and CEO of the Ashland County Community Foundation.

ACCF jumped aboard by helping Homeward Bound with its fundraising efforts.

Ralph Tomassi, Homeward Bound’s board president, said most of the money was raised by 350 donors who “realize a tremendous need for a new shelter here.”

“It’s a wonderful opportunity for a public-private collaboration in Ashland,” he said.

Bittle said the partnership reflects the progress the area has experienced over the last four years or so.

“For the first time, in my opinion — and I’m not going to speak for anybody else — everybody’s in the boat, rowing the same direction,” the commissioner said.

Bittle said construction of the building is not finalized, but he hopes it to be ready in October of this year. He expects the total cost to be anywhere from $750,000 to $1 million, meaning a portion would be covered by county coffers.

Having a nice dog shelter is a part of a community’s overall quality of life, Bittle said.

“When people come into this community, a lot of them have dogs. And they want a nice facility, knowing that we take care of our canines … the community will be very proud when this is done,” he said.