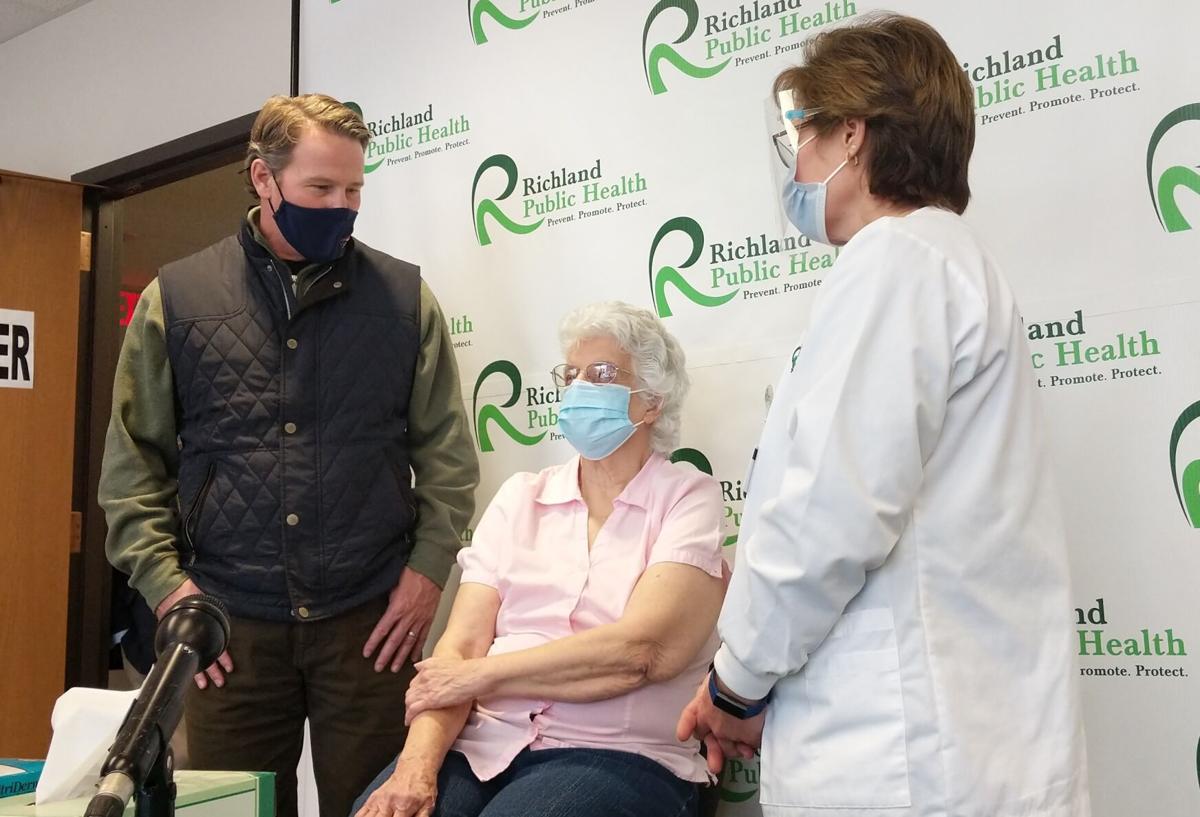 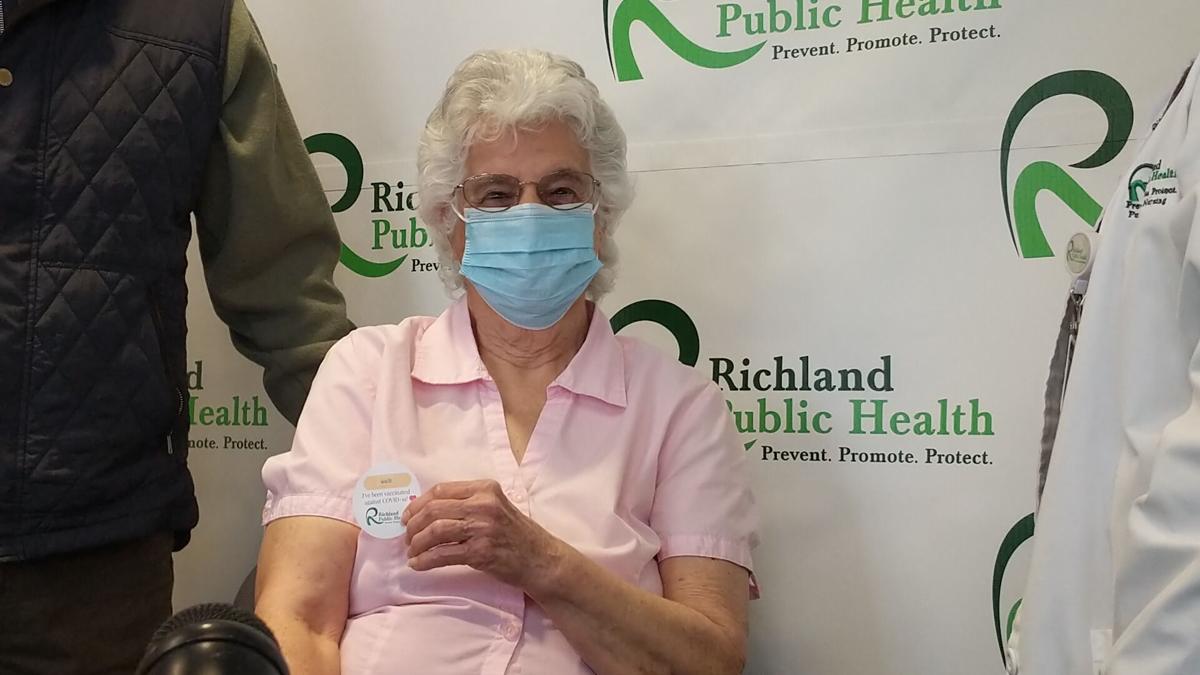 Doris Rheinbolt, 89, holds up her "I've been vaccinated" sticker after getting her second dose of the Moderna COVID-19 vaccine. Rheinbolt got her second dose at Richland Public Health and was featured on Governor DeWine's live press conference Thursday. 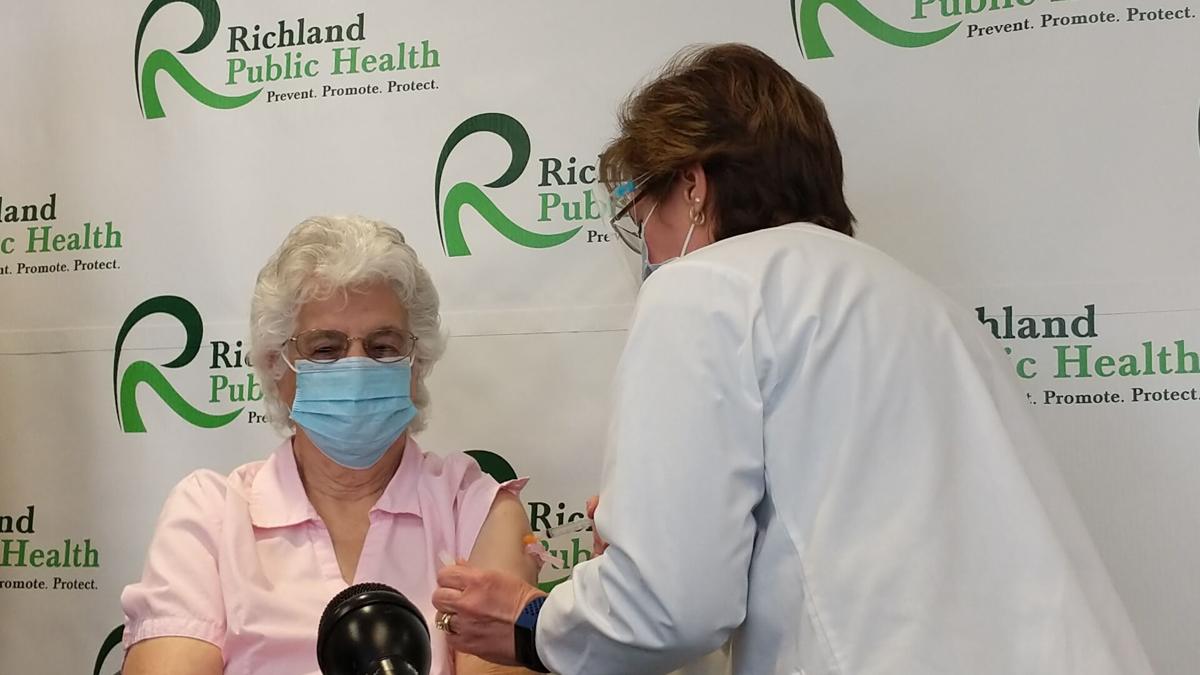 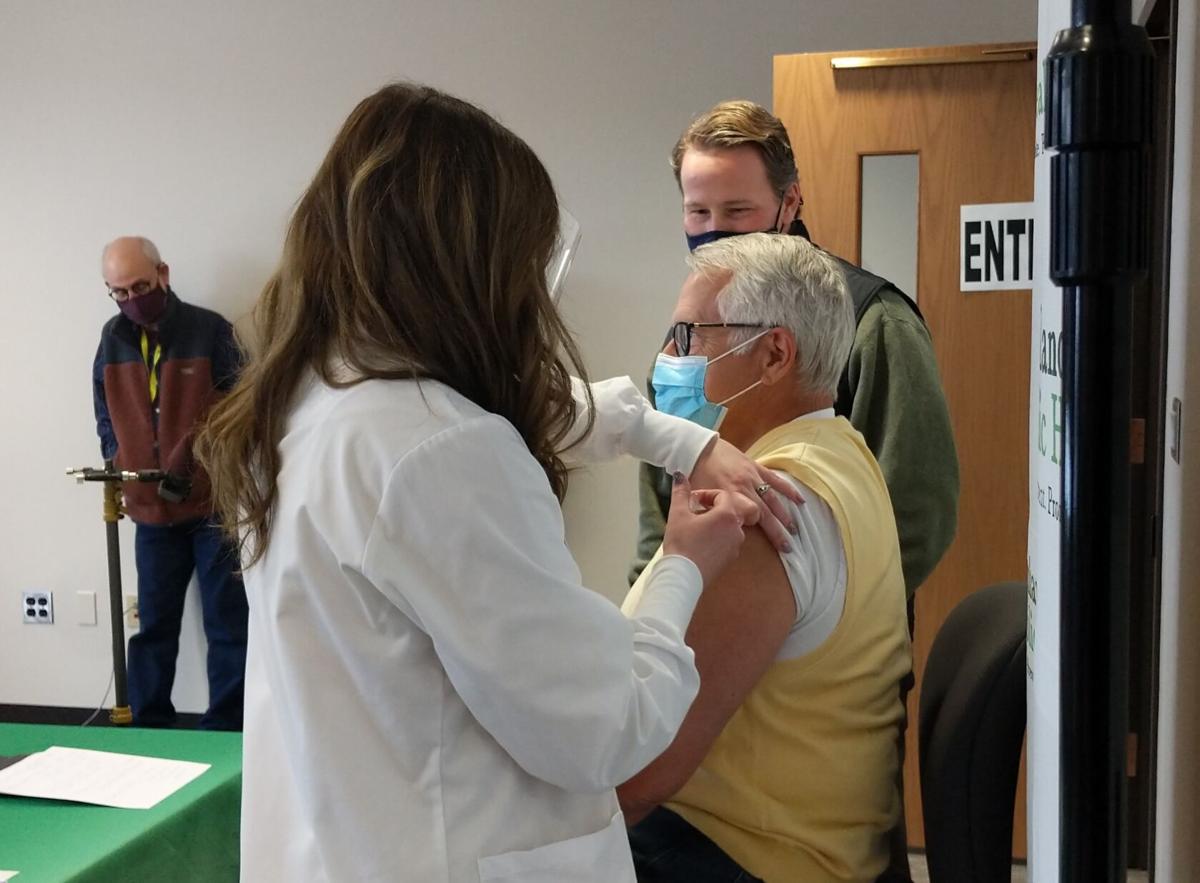 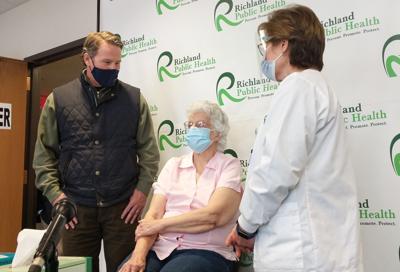 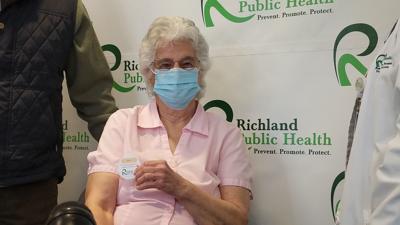 Doris Rheinbolt, 89, holds up her "I've been vaccinated" sticker after getting her second dose of the Moderna COVID-19 vaccine. Rheinbolt got her second dose at Richland Public Health and was featured on Governor DeWine's live press conference Thursday.

MANSFIELD -- Doris Rheinbolt smiled, her eyes shining above a blue medical mask. The 89-year-old Mansfield resident was calm as she awaited her second dose of the COVID-19 vaccine, practically oblivious to the cameras.

“To me, the main thing was getting the shot,” Rheinbolt said of her brief appearance on live TV.

“You sure you want Laura to give you the shot and not me?” he joked shortly before airtime.

"It was such an honor to have the lieutenant governor," said RPH Commissioner Sarah Humphrey. "This is our home. This is where we are really dedicated to improving health, so to kind of bring a spotlight to that has been wonderful for us." 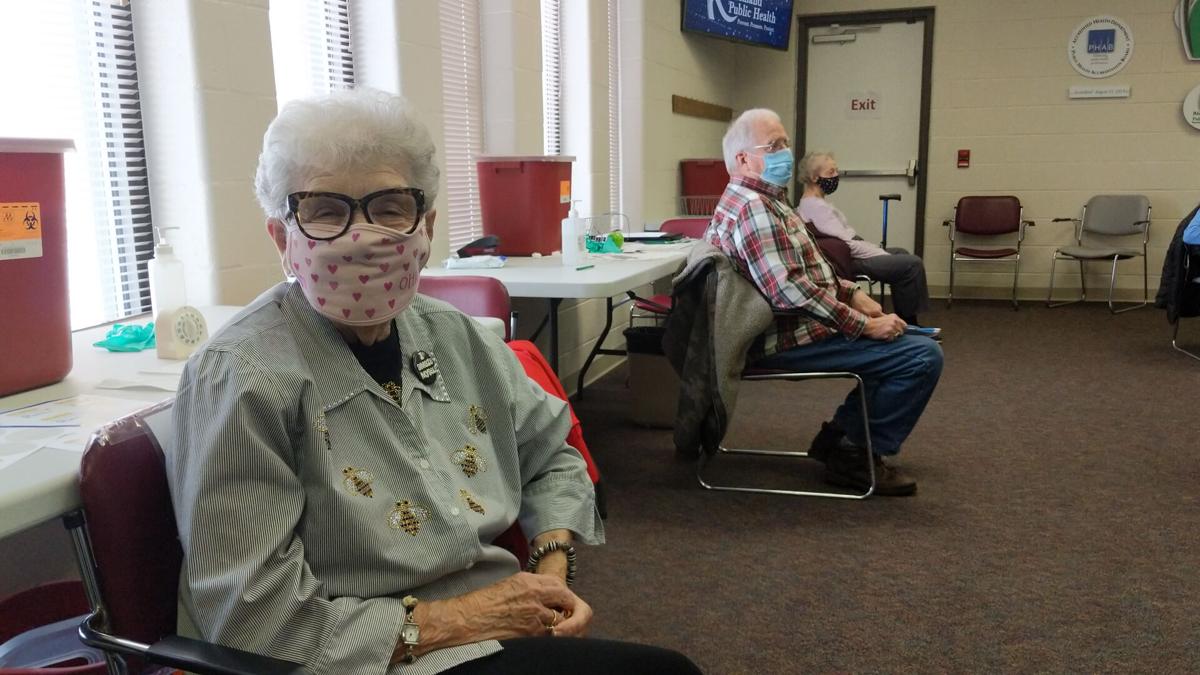 Joann Ackerman, 85, after receiving her second dose of the COVID-19 vaccine at Richland Public Health. 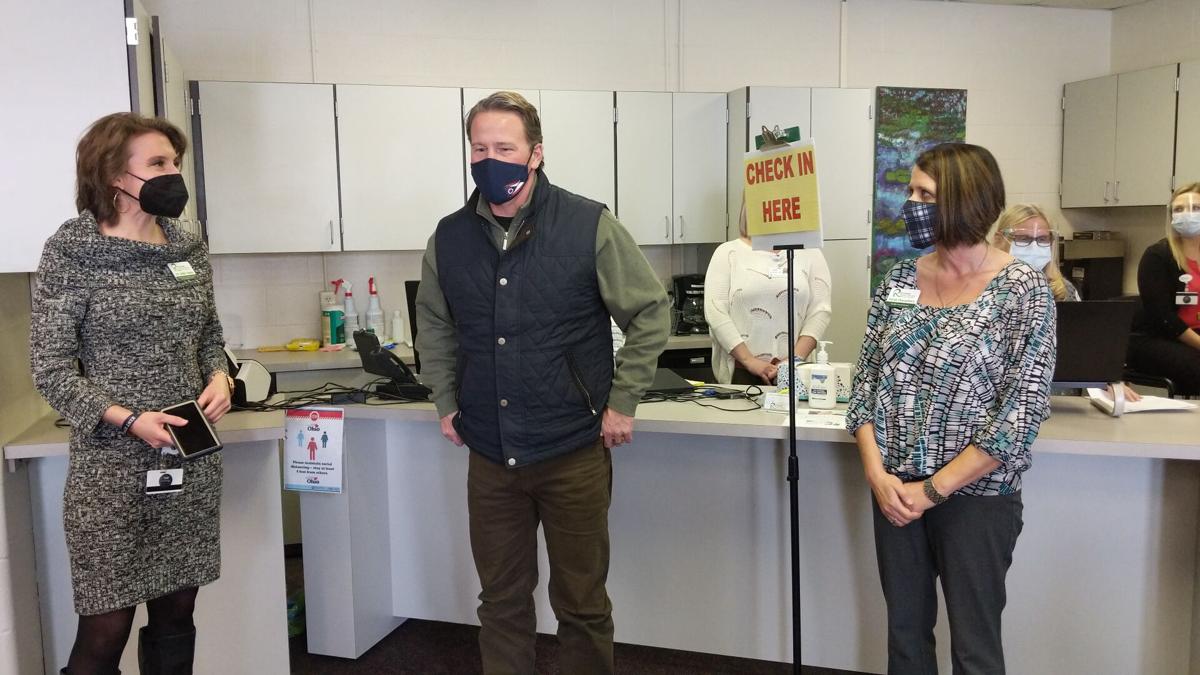 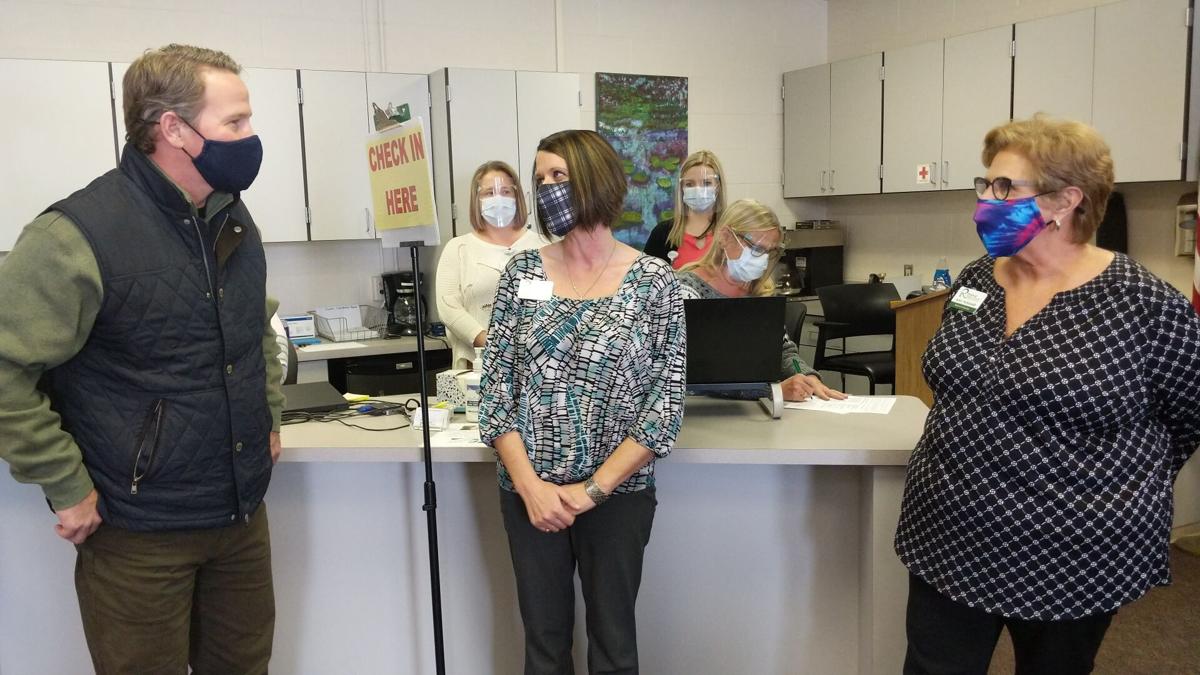 Joann Ackerman, 85, after receiving her second dose of the COVID-19 vaccine at Richland Public Health.

Amy Schmidt, director of nursing for Richland Public Health, said the RPH vaccination clinic opened on Dec. 28 and inoculates between 65 to 100 people per day. RPH has administered 2,700 doses of the COVID-19 vaccine and fully vaccinated 1,000 Richland County residents as of the end of the day Thursday.

“And that's just Richland Public Health,” Schmidt said. “There are additional providers in our county. On any given week, there could be up to 12 other providers who receive allocations.”

The RPH clinic has a “no waste policy,” meaning extra doses from vaccine overages are given to people on a waiting list. The clinic has disbursed more than 100 doses from overfilled bottles.

The vaccine clinic was full of residents receiving their second dose when Husted arrived Thursday.

Husted asked residents what being vaccinated meant to them. For Joyce Beal, it’s peace of mind.

“If you’re 81 years old like I am, you worry about being exposed to it because I know that people my age quite often die from it,” she said. “Now that I have my second dose. I don't have to worry about that anymore.”

Husted smiled and said that his parents, who live out of state, both recently received their second dose of the vaccine.

“My mom was sending me text messages with a thumbs up because now they can see their grandkids,” he shared.

Rheinbolt said the vaccine will allow her to regain some of the independence she lost amid the pandemic, which reached Ohio in March 2020.

“Now I can do things for myself -- go to the store and feed my birds,” she said.

She described the vaccination process as quick and painless.

“It's been a godsend,” said Joann Ackerman. “I’m just lucky to be able to get it. I want to keep my health as long as I can. Anything to avoid problems.”

“It’s been something I’ve been wanting to do for awhile,” he said.

Husted said the clinics around the state are operating efficiently, but the rollout is still hindered by a lack of available vaccines.

“Right now in Ohio, we have 2,700 different locations that are willing to be providers, but we only have enough vaccines to serve 700," he said.

Thus, it will be awhile before vaccine eligibility is expanded to younger populations.

“Only 58 percent of people over the age of 80 have been vaccinated," he said. "Not all 100 percent of them are going to want to do it, but clearly there's still a demand from the most vulnerable age groups."

"Until we get a sense that they have been served, it really doesn't make much sense to go to other groups," he said.

Editor's Note: This story was updated Friday morning to fix a typo and make a correction. At one instance in the story, the author wrote Richmond Public Health instead of Richland Public Health.

Also, the caption below the photo picturing Mayor Tim Theaker was corrected to show that Amanda Crawford gave him the COVID-19 vaccine, not Laura Corbett.