MANSFIELD -- Mansfield Law Director John Spon has issued a public apology for remarks he made about local Republicans during a public meeting Tuesday.

During a meeting of the Mansfield Charter Review Commission, Spon, a Democrat, cautioned members that lowering the required number of petition signatures to run for the non-partisan elected body may invite additional Republican involvement.

The law director, citing a hypothetical case involving Mansfield police and local minorities, said "a lot of (local Republicans) are not invested in being fair to all members of our community, particularly African-American and Brown Americans. They would never present that issue before the citizens (as members of the charter review commission)." 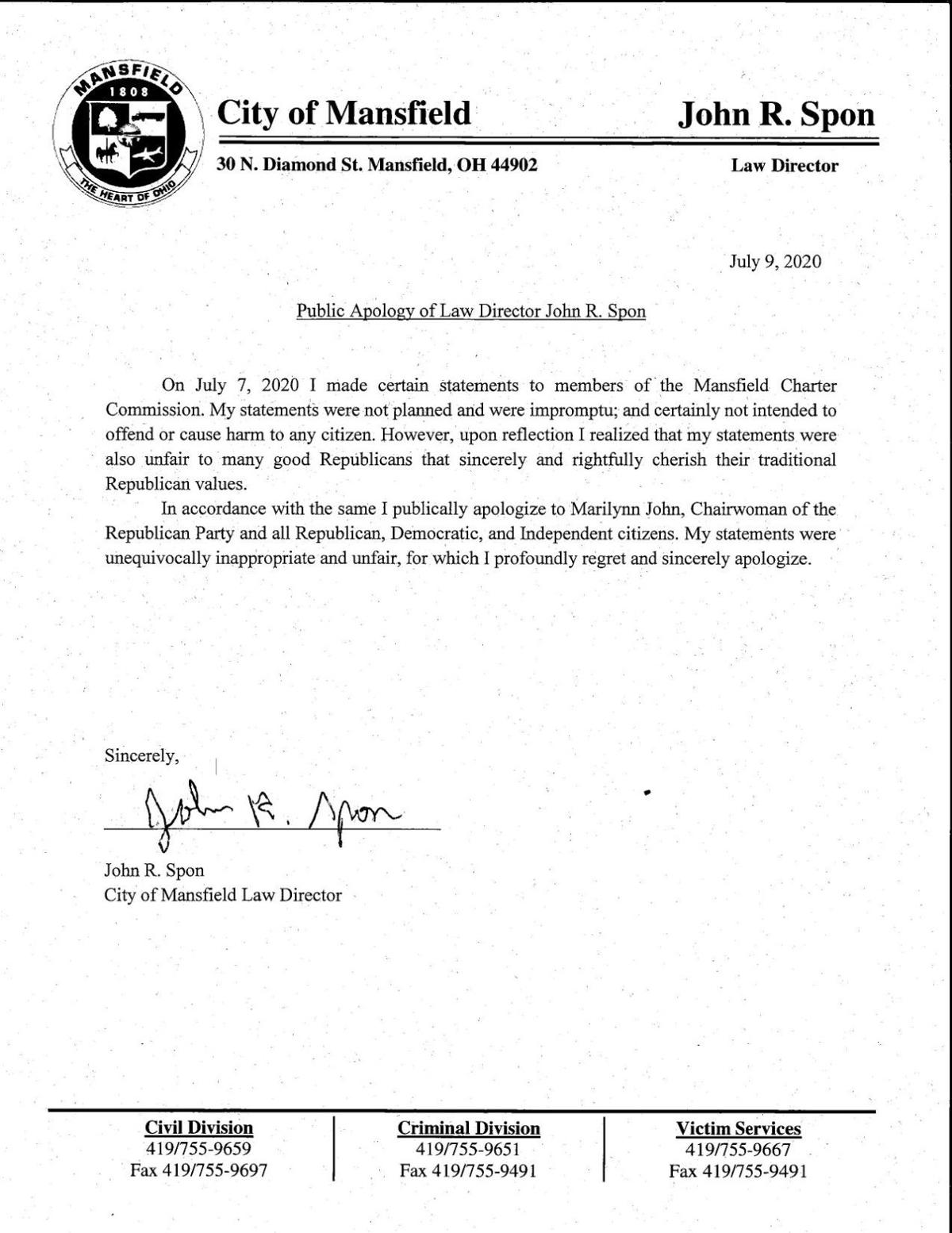 On Thursday, Spon issued an apology via email.

"On July 7, 2020, I made certain statements to members of the Mansfield Charter Commission. My statements were not planned and were impromptu; and certainly not intended to offend or cause any harm to any citizen. However, upon reflection, I realized that my statements were also unfair to many good Republicans that sincerely and rightfully cherish their traditional Republican values," Spon wrote in the email to Richland Source.

"In accordance with the same, I publicly apologize to Marilyn John, Chairwoman of the Republican Party and all Republican, Democratic and Independent citizens. My statements were unequivocally inappropriate and unfair, for which I profoundly regret and sincerely apologize," Spon wrote.

After the initial report of his comments were published Wednesday, John, a Richland County commissioner, issued a statement on behalf of the county GOP, condemning Spon's remarks, calling them "utterly disgraceful."

"Declaring that we Republicans 'are not invested in being fair to all members of our community, particularly the African Americans or Brown Americans' is an obvious attempt to spread dissension, hate and falsehoods by City of Mansfield Law Director John Spon," John said. "This is when we desperately need to come together as a community, to encourage conversation to address societal issues."

Larry Weirich, chair of the Richland County Democratic Party, was contacted for comment on Thursday afternoon.

"Law Director Spon has issued his public apology and that's where we leave it," Weirich said.