MANSFIELD -- Mansfield City Council is expected to vote Wednesday on a tax incentive package that will lead to the construction of a 160,000 square-foot industrial building/warehouse at 1750 Airport West Road.

The "spec building" project by Airport West I, 1310 W. Fourth St., involves an estimated building investment of $9 million on 15 acres, with work scheduled to begin Nov. 15.

The council meeting was moved to Wednesday due to Tuesday's election.

"Spec buildings" are those built by a licensed contractor on his/her own land for the purpose of resale or lease to a yet-to-be determined owner or tenant. 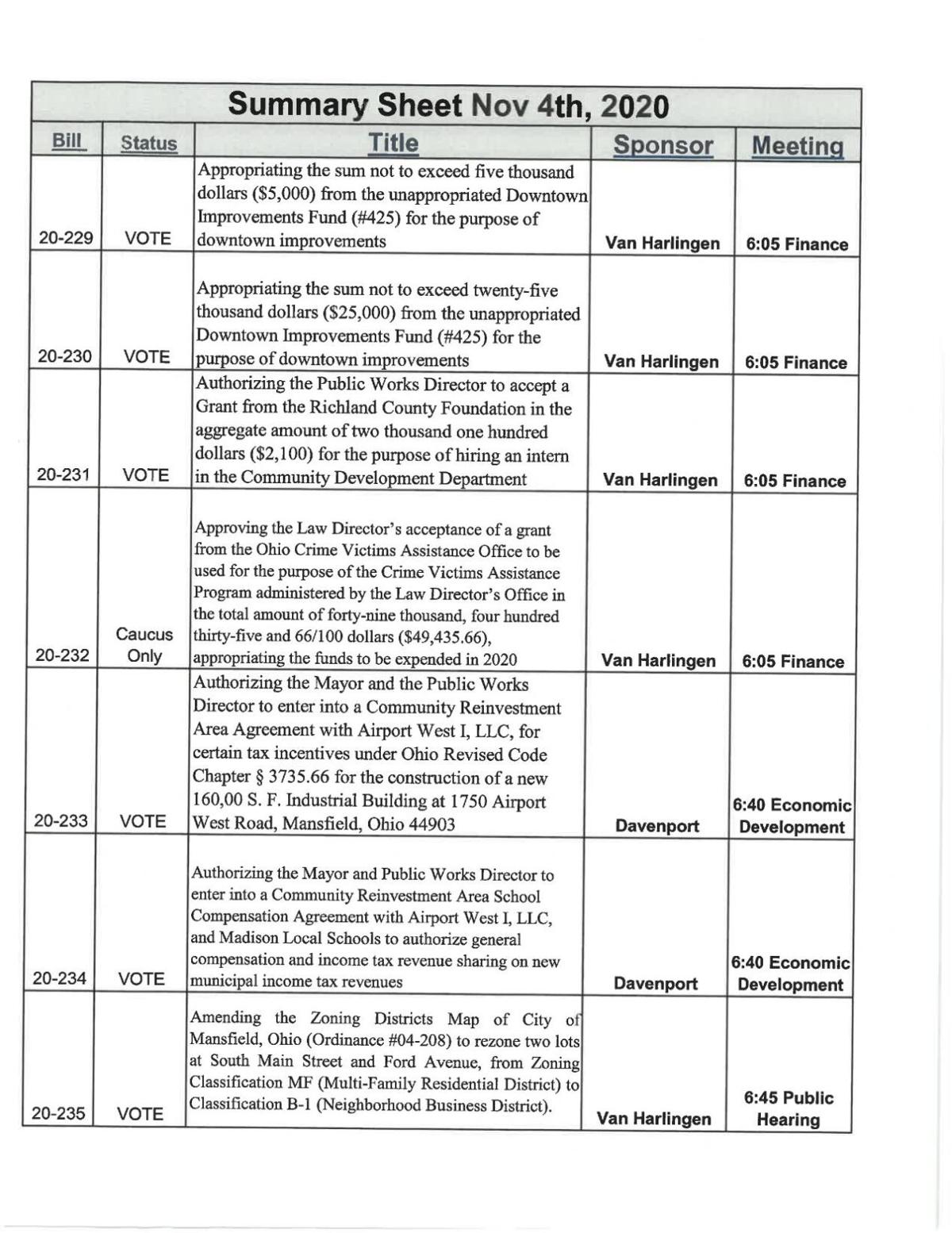 The city would grant a 100 percent tax exemption for real property improvements for 15 years. The project is through the city's Community Reinvestment Area. The tax incentive requires the permission of the Madison Local School District.

In exchange for the tax break, Airport West I will make a direct annual payment of $100,422 to the school district during the lifetime of the tax incentive.

In other activity Wednesday, council is scheduled to:

-- vote on two appropriations from the downtown improvements fund, totaling $30,000, for two projects -- one to install Christmas lights via the Richland Community Development Group ($5,000) and one to support a four-year building facade grant program through Downtown Mansfield Inc. ($25,000).

-- vote to authorize the public works director to accept a $2,100 grant from the Richland County Foundation to hire an intern in the community development department.

-- discuss during caucus a $49,435.66 grant from the Ohio Crime Victims Assistance Office for the local crime victims assistance, administered by the law director's office.

-- vote to authorize the public works director to advertise for bids and enter into a contract for hauling and disposal of water treatment plant sludge.

-- discuss during caucus amending city ordinances regarding emergency police and fire alarms "to encourage alarm users and alarm businesses to properly use and maintain the operational effectiveness of alarm systems in order to improve the reliability of alarm systems and reduce or eliminate false alarms."

-- discuss during caucus amending city ordinances regarding demolition order appeals to increase the cost of filing an appeal to $65, require additional information to submit an appeal and increase the cost to $10,000 for residential cash performance bonds for appeal.

-- discuss during caucus creating minimum standards for commercial air service providers at Mansfield Lahm Regional Airport and also to authorize the public works director to enter into a lease agreement with Niss Aviation to provide fixed base operator services at the airport.

-- discuss during caucus the city's temporary annual appropriations budget for the City of Mansfield, beginning Jan. 1. The budget will undergo a first reading Nov. 17, a second reading Dec. 1 and is scheduled for vote Dec. 15.

-- vote on the approval of a contract with MG Energy, Inc. for $98,395 to replace the boiler in the city's Municipal Building. The company submitted the lowest, best bid for the project, according to the legislation.

Caucus is scheduled to begin at 7 p.m. with the legislative session following immediately after.

City Council continues to meet in virtual session during the COVID-19 pandemic. It last met in person in March. The public can view committee meetings, caucus and council on the livestream on the City of Mansfield’s facebook page at https://www.facebook.com/cityofmansfieldoh/ or the city's website at http://www.ci.mansfield.oh.us/.

Members of the public with questions or comments should send them via email prior to the meeting at citycouncil@ci.mansfield.oh.us.

COVID-19: Mansfield may need to dip into 'rainy day fund' in 2021 due to revenue declines

Feeling the loss of income tax revenue largely tied to the COVID-19 pandemic, the City of Mansfield may have to dip into its "rainy day fund" during 2021.