MANSFIELD — A proposal to convert Diamond Street to two-way traffic through the downtown, put on hold when the COVID-19 pandemic reached Ohio, is up for discussion again for Mansfield City Council.

The conversion proposal, first presented to City Council on Jan. 21, is another part of the Mansfield Rising downtown reinvestment plan, which suggested the city adopt and implement a complete streets policy in the downtown area.

Legislation related to the project is scheduled for discussion Tuesday during council's 6:25 p.m. streets committee meeting and then again during the council caucus at 7 p.m.

According to the legislation, a first read is planned Dec. 1 with a council vote on Dec. 15. 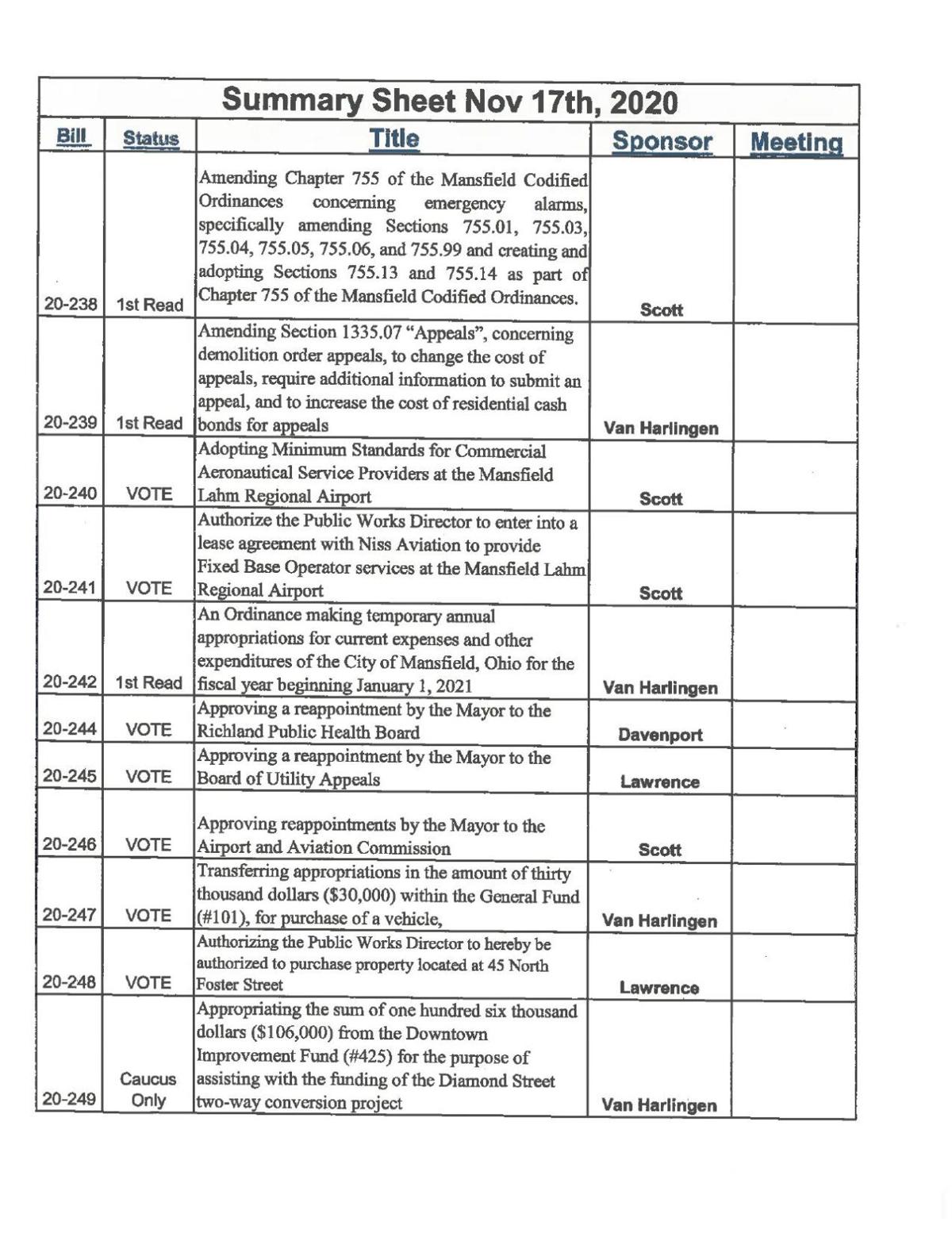 The proposal would convert Diamond Street to two-way traffic from First Street and Sixth Street. It would be similar to Mulberry Street, one-way southbound for many years, which was was converted to two-way traffic in August 2019.

At the time it was proposed, city engineer Bob Bianchi said the project's goal is to improve "to" traffic while not affecting "thru" traffic.

At the time, cost estimates for the work were around $400,000, depending on the quantities of asphalt, concrete and curb that are needed.

Funds for the project were not planned to come from the general fund. Instead, funds for the project would come from four sources -- the permissive sales tax, the street fund, road resurfacing fund and the Downtown Improvement Fund, which began when City Council approved a $5 increase in motor vehicle registration fees in May of 2018.

Companion legislation to be discussed Tuesday would be on appropriating $106,000 from the Downtown Improvement Fund to assist with the project.

In other activity planned Tuesday, City Council is expected to:

-- give first reading on amending city ordinances regarding emergency police and fire alarms "to encourage alarm users and alarm businesses to properly use and maintain the operational effectiveness of alarm systems in order to improve the reliability of alarm systems and reduce or eliminate false alarms."

-- give first reading on amending city ordinances regarding demolition order appeals to increase the cost of filing an appeal to $65, require additional information to submit an appeal and increase the cost to $10,000 for residential cash performance bonds for appeal.

-- vote on legislation creating minimum standards for commercial air service providers at Mansfield Lahm Regional Airport and also to authorize the public works director to enter into a lease agreement with Niss Aviation to provide fixed base operator services at the airport.

-- give first reading on the city's 2021 temporary appropriations budget.

-- vote on a requested appropriation of $30,000 to purchase a vehicle for the city engineer's office.

-- vote on a proposal  to purchase property at 45 N. Foster St. at a price not to exceed $35,000. The land is needed for a storm water culvert replacement project.

-- discuss during caucus the acceptance of a $28,300 grant from the Ohio Office of Criminal Justice Services for the Project Safe Neighborhood Program. The funds would be used to purchase software. The grant requires no match from the city.

Three committee meetings are planned before the council caucus: finance at 6 p.m., streets at 6:25 p.m. and claims at 6:45 p.m. Caucus is scheduled to begin at 7 p.m. with the legislative session immediately after.

All council meetings continue online only due to COVID-19 and state restrictions on gatherings of more than 10 people.

The public can view all of the meetings on the city's Facebook page at https://www.facebook.com/cityofmansfieldoh/ or the city's website at http://www.ci.mansfield.oh.us/.

Members of the public with questions or comments should email them in advance of the meetings at citycouncil@ci.mansfield.oh.us.

COVID-19: Mansfield may need to dip into 'rainy day fund' in 2021 due to revenue declines

Feeling the loss of income tax revenue largely tied to the COVID-19 pandemic, the City of Mansfield may have to dip into its "rainy day fund" during 2021.