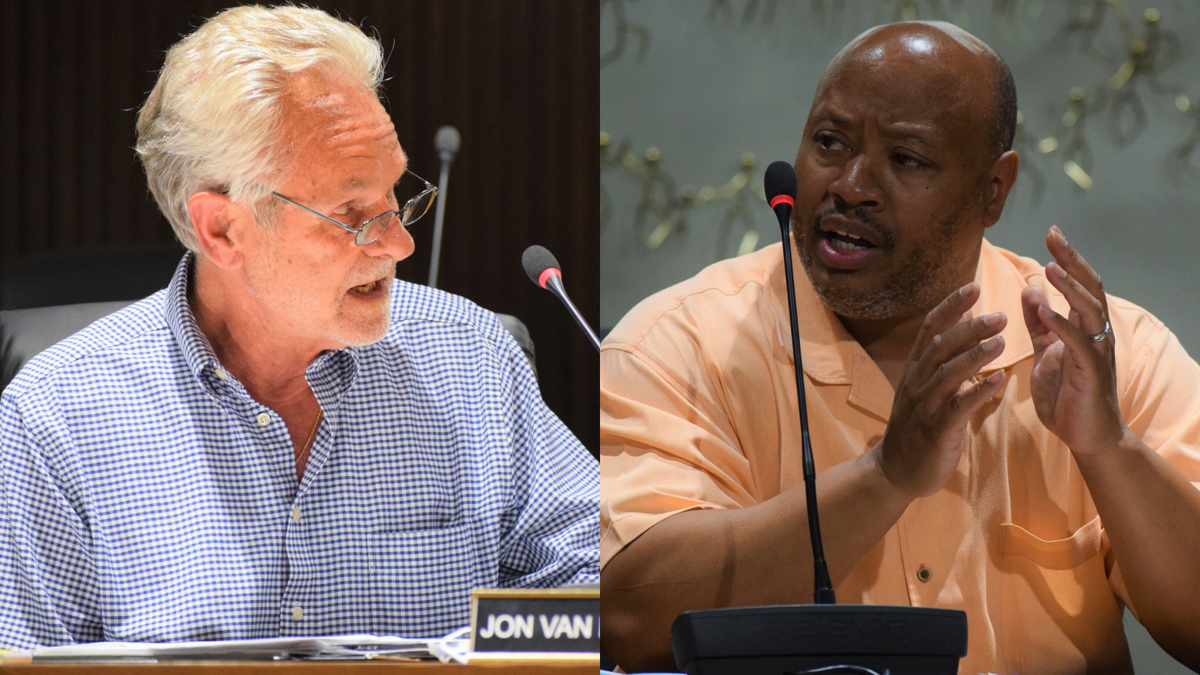 Two Mansfield City Council members, Jon Van Harlingen (left) and Jason Lawrence, debated on Tuesday evening over the scheduling of a committee meeting to discuss a proposed dry dam on Mansfield's north side. 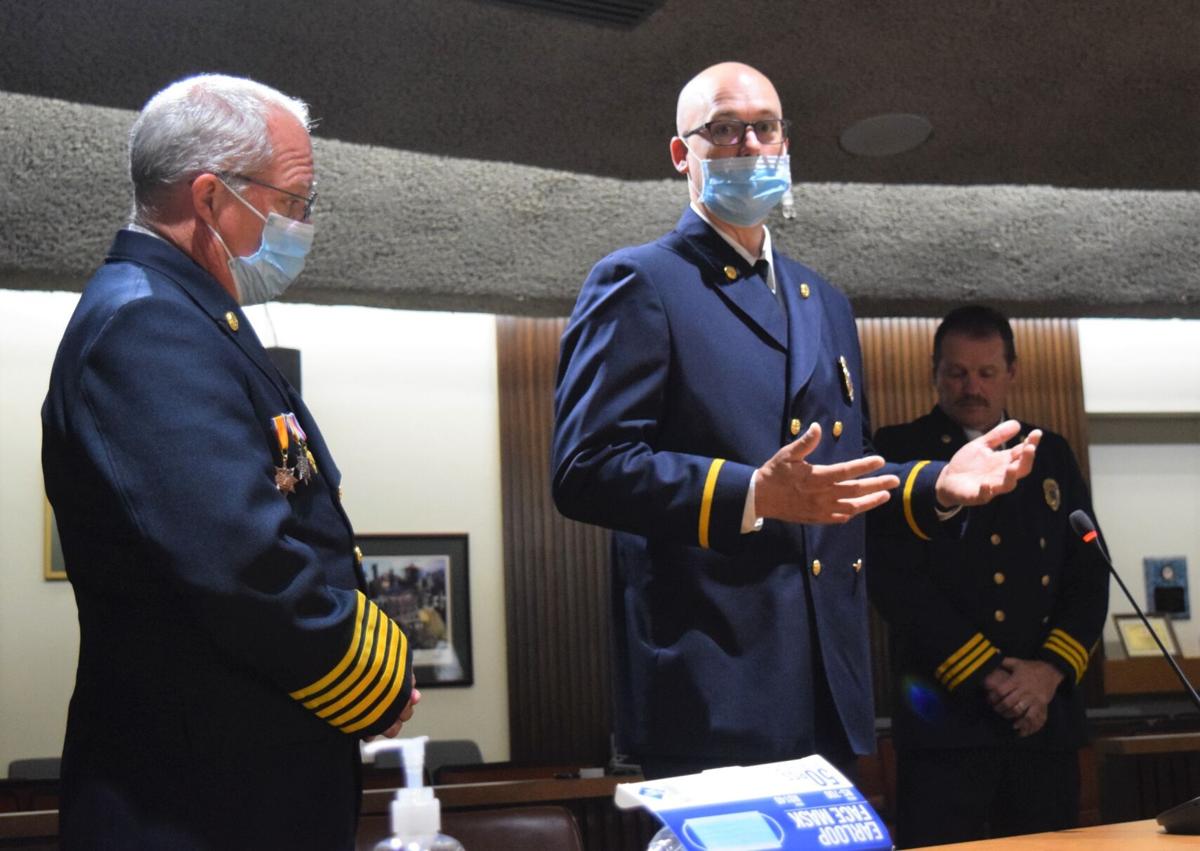 MANSFIELD -- A $15.5 million proposed dry dam was not on Mansfield City Council's agenda Tuesday night. But that didn't stop a torrent of words between two council members on the topic.

By the time the words stopped flowing, a member of council's rules committee wondered if a parliamentarian should be in the legislative body's future.

In her letter, Mount asked when council planned a public utilities committee meeting on the potential project -- first discussed by council in 2018.

At one point during the exchange, which became a back-and-forth dialogue at times, Lawrence accused Van Harlingen of holding "consitutients and stockholders at bay" by not scheduling a committee meeting.

Van Harlingen responded that he was not opposed to scheduling the meeting, but preferred to wait until more is known about the city's sewer and water funds.

"I want to see a stablization of these funds (before moving forward)," said Van Harlingen, who also chair's council's finance committee. "If we had a committee meeting tomorrow, I would say the same thing."

The project, aimed at protecting homes and businesses in the city's north end flood plain, was ultimately was put on hold in March 2019 until anticipated revenue from the $17 million water meter program, also being funded by a bond issue, was realized.

The replacement program was expected to be completed in 2020, but the ongoing installation program has been slowed, primarily due to the COVID-19 pandemic.

The city's public works director, Dave Remy, told council on Tuesday night that 16,172 new meters have been installed, but that 2,253 remain to be replaced. The city has not yet realized the expected additional revenue from the project, Van Harlingen has said.

The dry dam topic had not been a serious topic for council recently. But it bubbled back to the surface in April when Joe and Reba Matern, owners of Matern Metal Works, Inc., asked when the city plans to move forward with the project, titled the Touby Run Flood Mitigation Hazard Project.

The project is aimed at protecting homes and businesses in the city's north end flood plain, which officials have also said is key to also spurring economic development.

The 903-foot-long dry dam was proposed to be built just west of North Lake Park and would have a capacity of 135 million gallons. Officials said it would prohibit flooding except during the "100-year" rain events.

The city administration proposed the project in 2018 after several years of study. Properties and easements were acquired for the project and engineering for the work was done.

Mayor Tim Theaker was not present Tuesday night, another reason Van Harlingen cited for not scheduling the committee meeting.

Lawrence said the state's COVID-19 health restrictions are being lifted as of Wednesday, which would allow for a full discussion of the topic with all stakeholders and interested residents in the meeting.

"Life is getting back to normal. We have a lot of people who want to see the project move forward," Lawrence said. "We must have a serious discussion about this. We can't just keep putting the brakes on this."

Lawrence said it appears the city may be able to use some portion of its $22.5 million American Rescue Plan federal funds to help pay for the project and that state grants may also be available.

"This is a golden opportunity to redevelop the north end," Lawrence said. "This is a legacy that we are leaving and leaving and you keep putting the brakes on it."

Van Harlingen said, "I want to see the grant. I want to see what part of the $22 million the city administration is recommending for the project. Where's the money coming from the grants with the state? Everybody keeps talking about it. I haven't see it.

"That's why I have trouble scheduling a committee meeting (on the topic)," Van Harlingen said.

Near the end of the meeting, Stephanie Zader, an At-large member and a rules committee member, suggested council may need a parliamentarian to help maintain a better understanding of proper meeting etiquette.

"I think this meeting tonight showed we have a lack of understanding of the rules," Zader said.

Falquette pointed out he normally serves as parliamentarian as council president, but added he had no objection to discussing the effort with the rules committee.

-- discussed during a parks committee meeting a spate of recent vandalism in several parks. Police Chief Keith Porch said he would share with council members options about security cameras that could be installed.

-- honored Mansfield Fire Dept. Lt. Shawn Yerian for completing the four-year U.S. Fire Administration's National Fire Academy Executive Fire Officer Program. To complete the program, Yerian took one two-week course per year at the National Fire Academy in Emmitsburg, Md. After each course, Yerian had to complete a research project related to the MFD within six months. Through his grant-writing efforts, Yerian has helped the the department obtain more than $1 million in outside financial assistance.

-- voted to create a Public Arts Commission and also established a permit and approval process for murals on public property or visible from a public thoroughfare. The commission could help accomplish one of the central goals found in the Mansfield Rising downtown investment plan.

-- discussed during caucus the appropriation of $6,393.59 to buy crime lab equipment and $7,500 to purchase DNA supplies for the crime lab.

-- approved the transfer of $41,549.43 within the street maintenance and repair fund to make the initial annual payment on a street sweeper truck.

-- discussed during caucus the 2022 tax budgets for the Township of Mansfield and the City of Mansfield, which must be submitted to the county auditor's office.

-- approved a 36-month contract with an electric supplier for city-owned buildings that is projected to save the city about $80,000 annually. The city, now paying 4.74 cents per kilowatt hour will pay 3.81 cents per hour under the new contract. "It's by far one of the lowest rates I have seen," Van Harlingen said.

Discussions about water -- the stuff kids like to play in and the same stuff adults have to pay for -- were key topics for discussion Wednesday night at Mansfield City Council.