MANSFIELD -- Brigitte Coles wants people to know that love is behind the drive to recognize that systemic racism is a public health crisis in Richland County.

"We did this out of sincere love for this community," Coles said. "It has become so political, and it shouldn't be."

The Mansfield City Council public affairs committee will discuss the resolution Tuesday at 6:30 p.m., a meeting that will be live-streamed on the city's Facebook page. 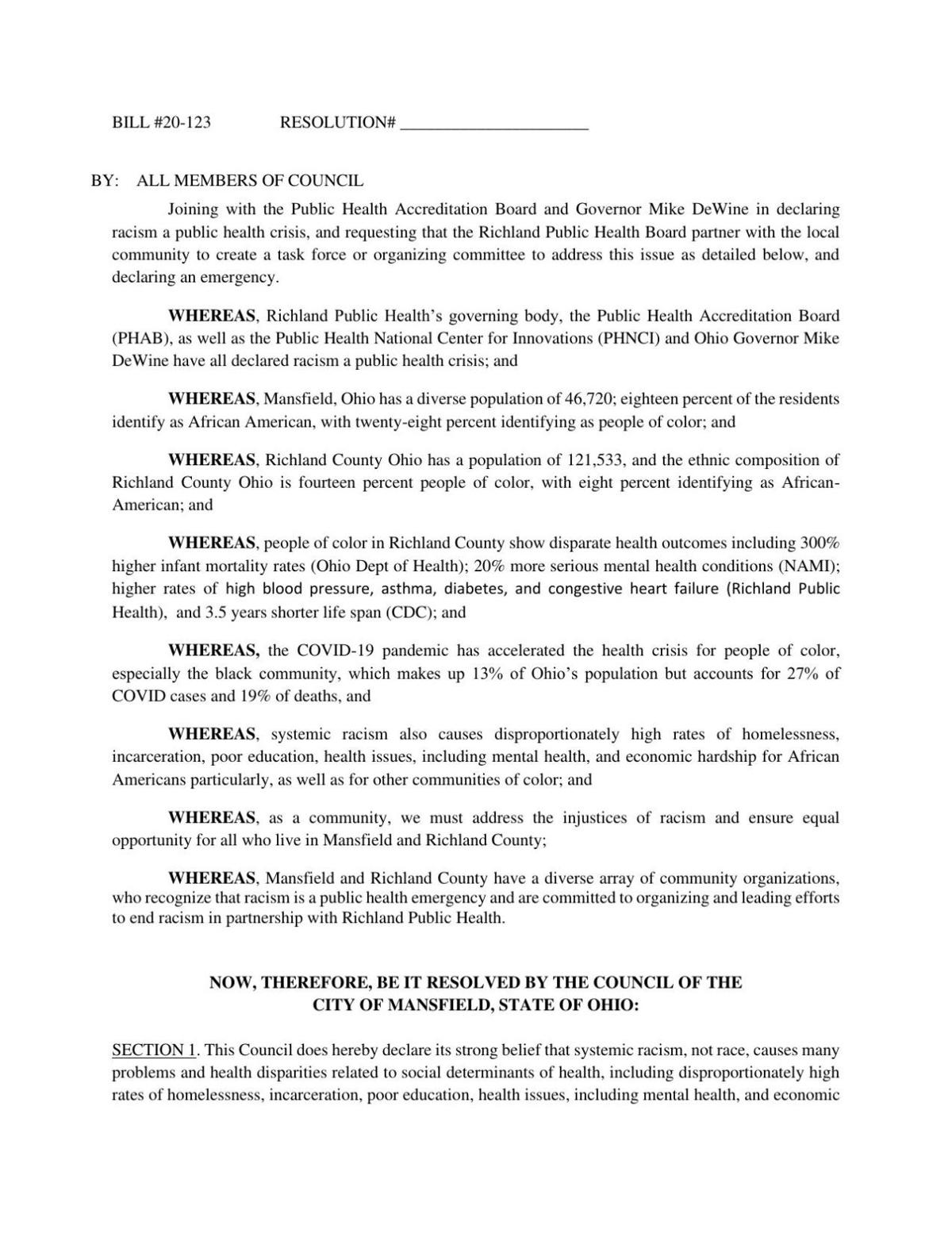 Sixth Ward Council representative Jean Taddie said the original resolution is one that received a first reading in June.

"At this point, only a motion during council followed by a majority vote can change Bill 20-123. So this version is on the records until at least July 21, which is the next council meeting," Taddie said in an email.

"With that said, I will be presenting potential revisions for discussion at the Public Affairs committee meeting on Tuesday, July 14. My proposed draft focuses more specifically on what our local health department has the authority to accomplish. I've also highlighted a few of the disparate health outcomes that motivate this work," said Taddie, who chairs the committee.

BEHIND THE EFFORT: Coles is one several local diverse women who began work on this effort weeks well before Minneapolis police killed a Black man named George Floyd on May 25, which has triggered a national movement for social justice.

The group said the effort has nothing to do with any current or future efforts at defunding police departments.

Sparked by the disproportionate toll the COVID-19 pandemic has taken in the Black community across the nation, the effort to address racial inequality in Richland County began even before then through the work of the North End Community Improvement Collaborative.

Led by Deanna West-Torrence, who is part of the nine-woman group working on the resolution with Coles, the NECIC commissioned in January The Richland County State of the African-American Report, detailing those inequalities.

Among other Richland County indicators found in the report:

-- Black households are more than twice as likely as White households to receive food stamps.

-- More than two-thirds of local Black men were "out of the labor force."

-- Black students made up 29 percent of the Mansfield City Schools, but were far more likely to face disciplinary issues. 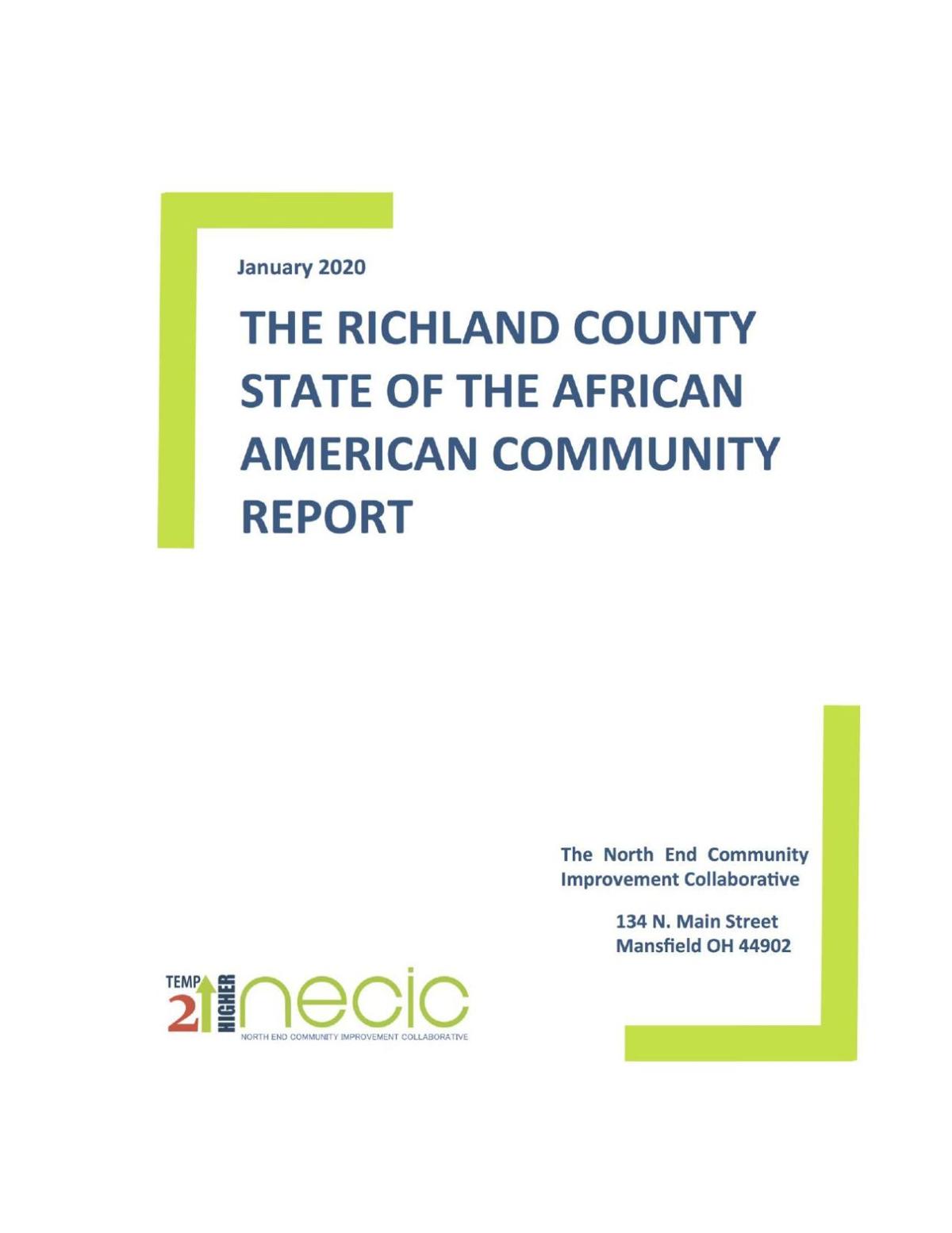 The report also found only 9 percent of African Americans responded to health surveys sent out for the 2016 Richland County Community Health assessment. "As a result of this and other factors, local health data by race is sparse," the report said.

"It's about addressing systemic racism and confronting racial inequality, leveling the playing field," said Height, a professor at OSU-Mansfield. "It's about Richland County being the best it can for everyone."

Castle, a Mansfield native who earned her Ph.D. in history from Cambridge University, has done extensive work on indigenous rights during the American Indian Movement in the 1970s.

Castle, whose documentary "Warrior Women" was nominated for a Peabody Award in May, said the effort should not be framed as a political or partisan battle.

"It's about humanity," she said. "More than ever, we need meaningful conversation. I so desperately wish we as a community could make ourselves vulnerable to learning something new."

Davis-Weese said she understands some may consider the redistribution of power as a scary proposition.

"We're (seeking) to make a bigger pie and help make sure everyone can have a piece of it," she said.

The original resolution came before City Council on June 16, though members opted to delay a vote until July after some legislators expressed questions about what the resolution seeks to accomplish.

Since then, the national Public Health Accreditation Board and Ohio Gov. Mike DeWine have declared racism a public health crisis, as has Franklin County and the cities of Akron, Cleveland and Columbus, among others. 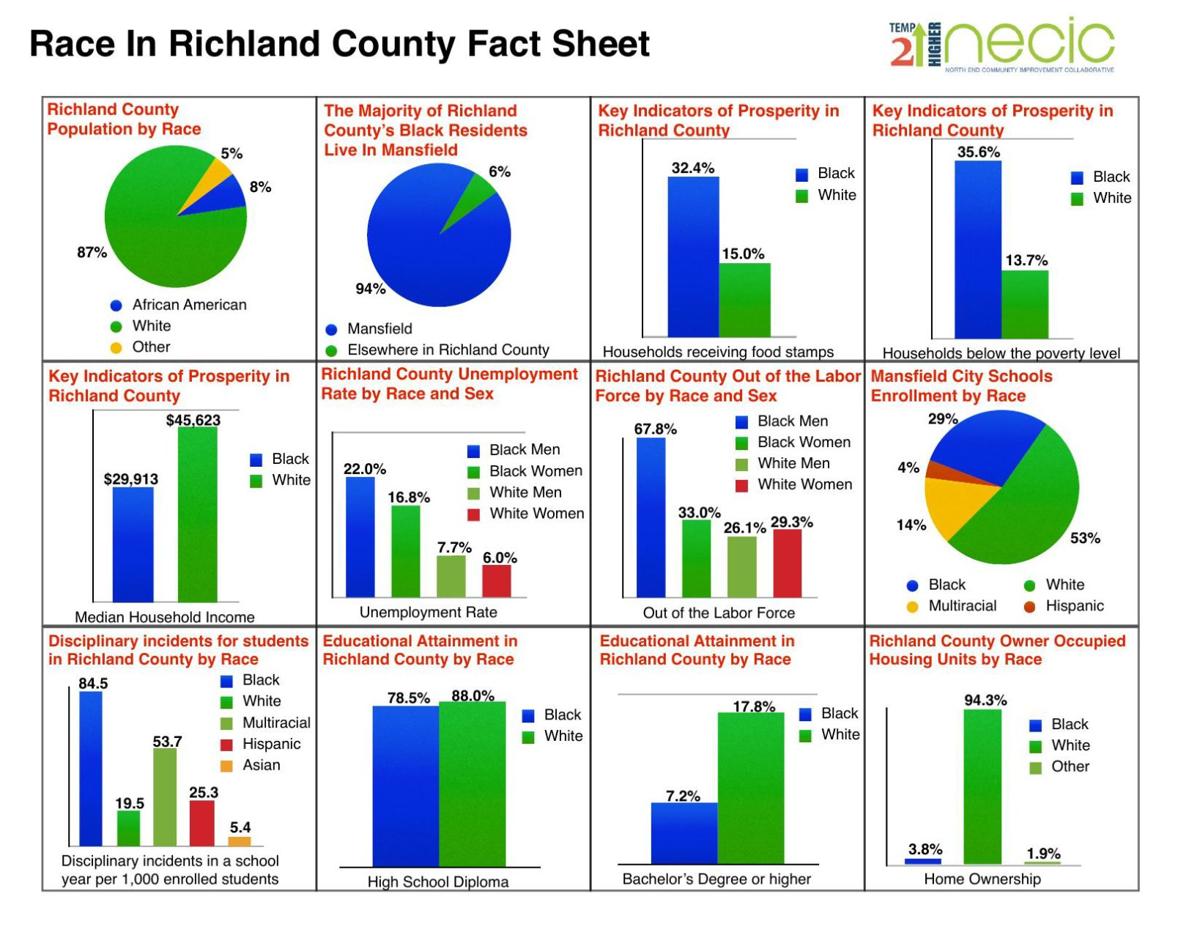 The revised resolution calls for a partnership with Richland Public Health in the formation of a task force to address racial inequalities in the community, including disparate health incomes, homelessness, incarceration, education, mental health and economic hardships, among others.

Members of the group said they hope to have RPH participation, but that the effort will proceed, nonetheless.

"We are trying to make everything evidence-based and data driven," Hiner said. "There are facts and data out there that shows systemic racism has helped to create a public health crisis."

West-Torrence, a former member of Mansfield City Council who founded NECIC in 2006, said the task force would examine specifics on how racism has impacted structures and institutions in Richland County.

"The initial steps would be fact-finding, determine what steps need to be taken and track over time to tell us if we are headed in the right direction," West-Torrence said.

"This can't be a one-and-done -- a community meeting and then everyone walks away," West-Torrence said. "How do we sustain it? There is room for everyone at the table to become involved."