MANSFIELD -- A watery pre-pandemic issue resurfaced Tuesday night when Mansfield City Council met in person for the first time in more than a year.

Joe and Reba Matern, owners of Matern Metal Works, Inc., came to the meeting to ask when the city plans to move forward with the Touby Run Flood Mitigation Hazard Project, a $15.5 million project aimed at protecting homes and businesses in the city's north end flood plain.

Reba Matern read a letter from the couple, whose business is at 210 N. Adams St., that said their flood insurance premiums continue to rise after significant floods in 2007 and 2011 due to major rain storms. 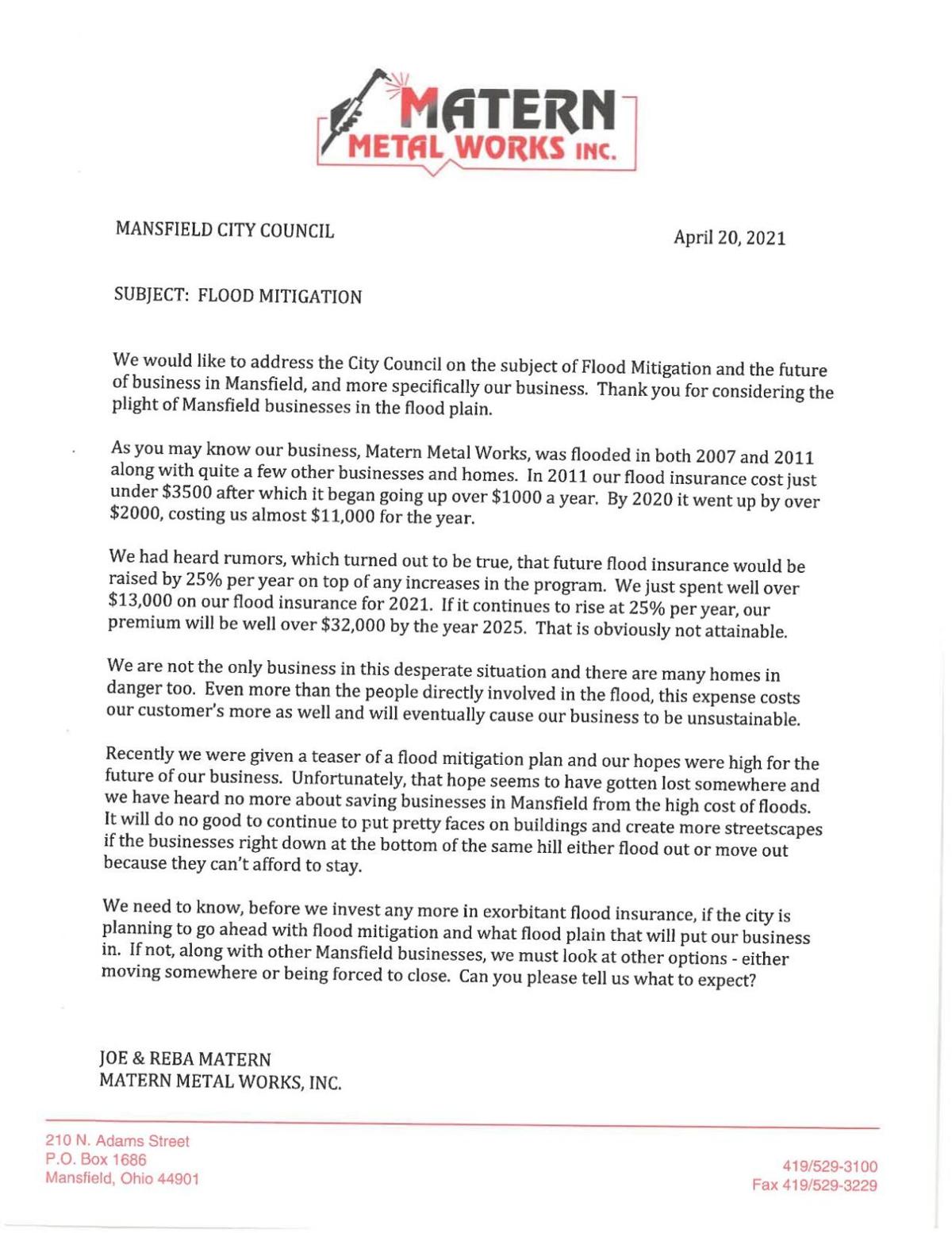 "We have heard rumors, which turned out to be true, that future flood insurance would be raised 25 percent per year on top of any increases in the program," the letter said.

The city administration had proposed the $15.5 million dry dam project in 2018 after several years of study. Properties and easements were acquired for the project and engineering for the work was done.

The program was ultimately was put on hold until anticipated revenue from the $17 million water meter program was realized. The replacement program was expected to be completed in 2020, but the ongoing installation program has been slowed due to the COVID-19 pandemic.

Increased water revenues from the new meter is expected to pay for the replacement program.

The city's proposal had called for the usage of sewer department funds to pay for the dry dam, a move that had been questioned by some members of council. Sewer rates were raised a few years earlier to pay for EPA-mandated improvements at the city's sewage treatment plant.

Since that time, the Ohio EPA has mandated improvements at the city's water treatment plan, which led City Council to approve a $35 million bond issue in September 2020.

The Materns told council members they recognized the city has infrastructure problems, but questioned downtown improvements while the flood plain remains exposed.

"It will do no good to continue to put pretty faces on buildings and create more streetscapes if the businesses right down at the bottom of the hill either flood out or move out because they can't afford to stay," their letter said.

The Materns said they need to know if the city plans to move forward with the dry dam "before we invest any more in exorbitant flood insurance."

"If not, along with other Mansfield businesses, we must look at other options -- either moving somewhere or being forced to closed," they said in the letter.

3rd Ward Council representative Jon Van Harlingen, one of those who questioned the idea of using sewer funds for the dry dam in 2018, suggested to council President David Falquette that a committee meeting be scheduled to allow the city administration to provide an update to council.

"With what I am watching right now, I have some serious concerns about the water and sewer funds," Van Harlingen said.

Falquette said such a meeting, likely involving the public utilities committee, could be scheduled when council meets again on May 5.

Mansfield water rates may increase 70 percent over next six years

Mansfield water rates would rise almost 70 percent over the next six years under a proposal that would help pay for a $35 million water treatment plant renovation and maintain the city's aging water system for the next decade.