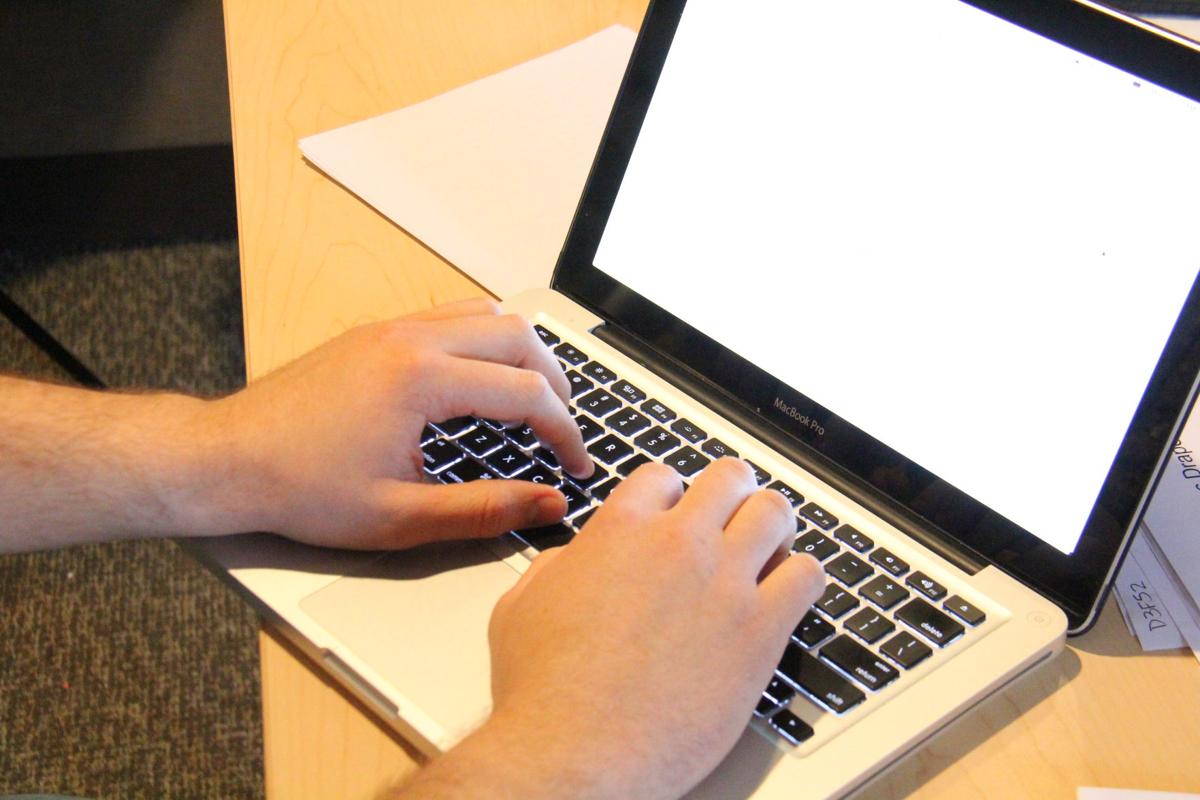 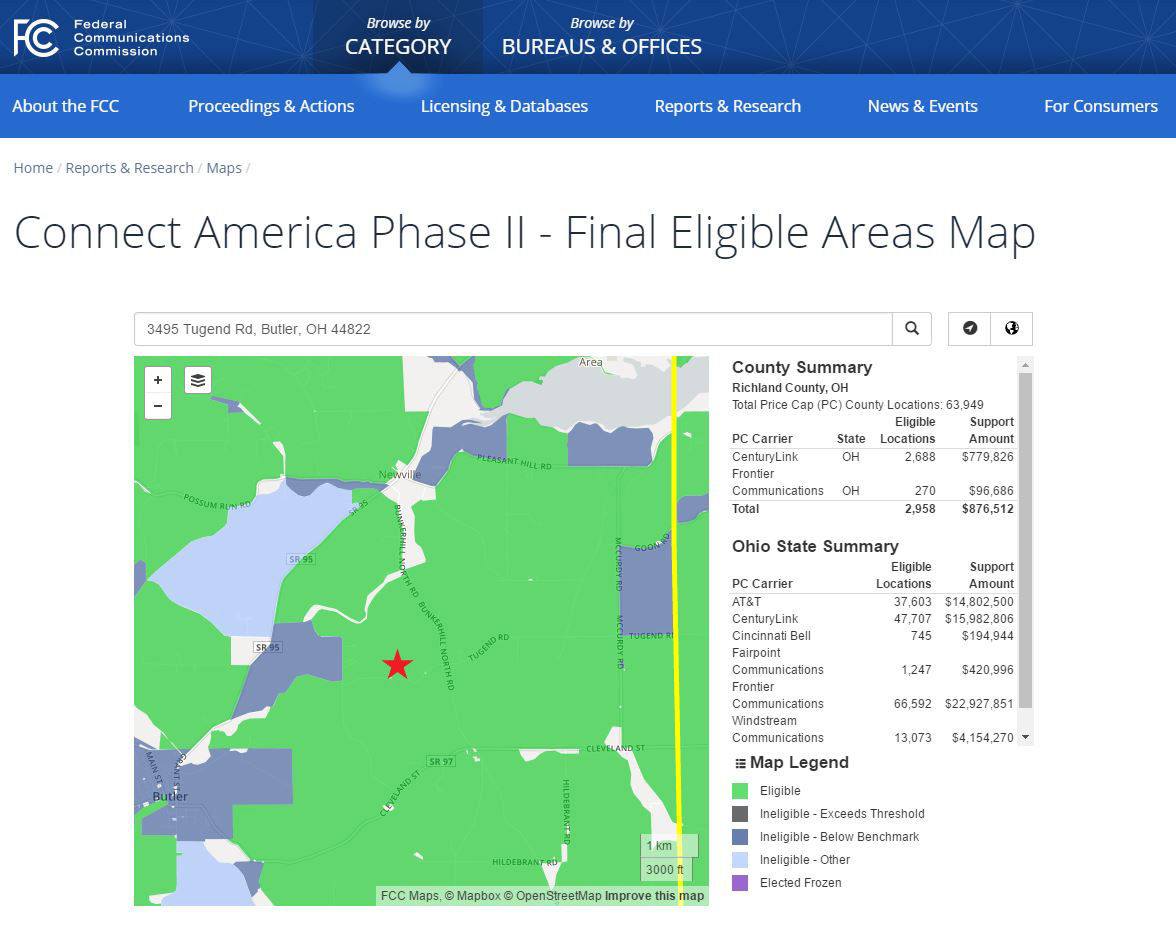 This screen shot shows how much federal money was allocated to Richland County internet providers were given to set up cable lines in rural areas of the county by 2020.

EDITOR'S NOTE: This is the first in a three-part series about internet deserts in rural Richland County.

MANSFIELD — Technology and economic development are key elements to strengthening the economy of a city, town or county. Richland County's larger populations in Mansfield, Shelby, Ontario, Lexington and Bellville have businesses which attract customers and help bring revenue to the town through taxes.

But for rural areas the scenario is tougher.

Those pockets have a technological and economic problem, and finding a fix isn't easy.

For instance, on the edge of Butler, a stream of outdoor recreational parks struggle to find ways to use cost-effective internet.

Chris Ashcroft, co-owner of Ohio Dreams, an action sports summer camp and concert venue said the internet signal in Butler is weak or so absent at his place of business he has to use his cell phone as a hot spot to the fulfill his everyday business requirements. It's an expenditure he wouldn’t need if he had access to faster internet speeds.

“Our whole business is based off internet — from campers’ registration to when a customer buys something,” Ashcroft said. “We also upload and download tons of videos daily for our camps and festivals. You don’t want to have a weak signal.”

Many rural areas in Richland County are referred to as Digital Deserts by those familiar with the situation.

For the internet deserts’ inhabitants, it’s the haves vs. the have-nots. Those in rural areas are struggling with this issue, while urban areas bolster from the proverbial oasis, said Stuart Johnson, vice president of Digital Works, a Columbus-based company which helped streamline Dublin into a beaming digital economy.

"It’s the difference between a flip phone and smart phone," he said.

There are several cities in Ohio who have decided to bring high speed internet to their communities. Some predict the digital divide will only grow deeper as 78 percent of households in Ohio move along with the ever-advancing technology.

Ohio Dreams, which attracts its bulk of customers from outside the local area, has struggled to grow its audience due to its location in a digital dessert.

“Without the internet, that’s hard to (reach an audience). Certainly putting an ad in in the phone book isn’t going to cut it for Ohio Dreams,” said Barrett Thomas, Richland Community Development Group’s director of economic development. “In a larger sense, tourism is a fantastic thing for the economy. People come in from out of town, drop cash here and then go home.

“They’re not staying here (permanently), we don’t have to find housing for them, we don’t have to find jobs for them. They just drop cash and go home. They have a great time and talk about how everyone else should come here. That’s a great thing. We want to help tourist businesses in the county. When you have tourism, you’ve got increased sales tax. Richland County benefits from increased sales tax from increased tourism.”

Having faster speeds of broadband increases the ability to upload video — one of Ohio Dream’s main ways of advertising.

“As the world moves on, others could be lost,” Johnson said.

That is what Ohio Dreams fears. The ability for its patrons to Facebook Live and Snapchat friends while having fun at the sports camp, Thomas said. That kind of viral marketing is missing from Ohio Dreams’ available marketing strategy -- due solely to its location.

There is hope, for some rural dead zones, though. The Federal Communication’s Act has allocated money to wireless companies in the state to incentivize expansion to voice and broadband services for areas where they are unavailable.

The Connect America Fund is in its second phase this year, and CenturyLink and Frontier Communications have been supported with $876,512 combined for 2,958 eligible locations to place new broadband lines in the county.

CenturyLink will be bringing 47,000 rural households and businesses high speed internet to Ohio, said CentryLink’s spokesperson Pat Welch in an email. Welch did not provide what type priority Richland County is given, but said the upgrades could take up to six years.

According to the U.S. Department of Transportation, a 2006 Fiber Optic Cable installation costs $52,400 per mile in North Carolina.

Library hotspots can help those in internet deserts

he Mansfield/ Richland County Public Library has found a way to deal with the everyday hindrances of minimal internet in rural parts of the county: Hotspots