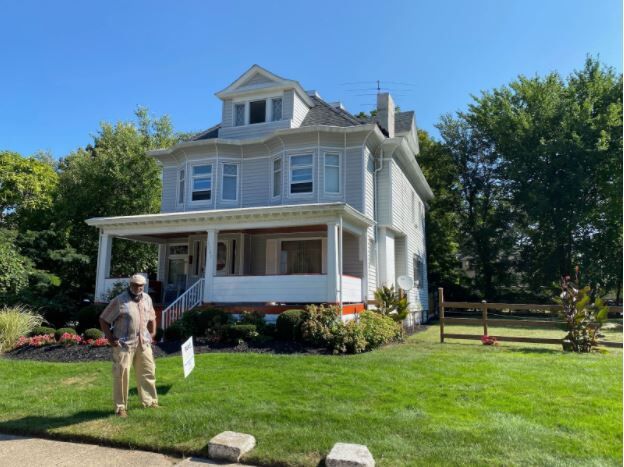 Al Jenkins is shown here in front of his Cleveland home. 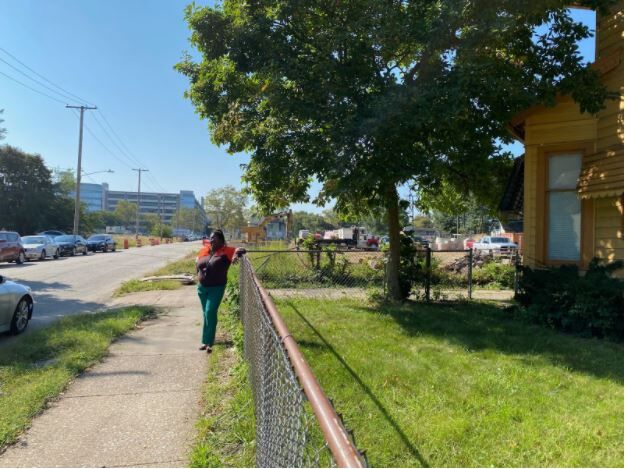 EDITOR'S NOTE: This is the second day in a 3-part series on Artificial Intelligence.  This project was funded by a grant from the Pulitzer Center and provided by Eye on Ohio, the nonprofit, nonpartisan Ohio Center for Journalism. Richland Source has entered a collaborative agreement with Eye on Ohio to share content. Please join the free mailing lists for Eye on Ohio as this helps provide more public service reporting.

Al Jenkins has what neighbors call “the nicest house on the block.” The renovated historic structure has fresh gray paint and manicured landscaping. A side lawn looks like it also is his. Jenkins fenced it and cuts the grass. But the City of Cleveland Land Bank won’t sell him the property. They told him they are saving it for future development.

Down the street from Jenkins, across from the Cleveland Clinic, bulldozers buzz around new construction on land the city gave to a developer from land bank and purchased property. The new Addis View Apartments will cost about $2,000 for a 2-bedroom in a zip code with a median income of $29,225 according to Census data.

Jenkins is happy about the new development. He’s not just a neighbor but a small-business owner heavily invested in the neighborhood.

“Anything coming to this neighborhood is going to be a plus for us,” Jenkins said.

His block resembles Swiss cheese: historic homes interspersed with vacant land bank lots. Jenkins came from a suburb in 1982. He was tired of spending all his factory income on housing. He eventually bought and fixed up many more rental houses.

So why give properties in the same area to one company and not to Jenkins?

The City of Cleveland did not respond to multiple requests for comment. (Note the city land bank should not be confused with the county land bank, which said it has no such policy.)

Using machine learning methods, Eye on Ohio looked at property remediation in several counties to look deeper at a process that has transformed the rust belt over several years.

Certain factors such as location or school district made a property more likely to be picked for remediation in some counties. And in certain areas, officials responsible for economic recovery are the same people in charge of that remediation.

In Cuyahoga County, out of all properties behind on taxes in 2018 and/or 2019, a total 2,798 went through government foreclosure or ended up in the land bank through gift or foreclosure (counting combined parcels together) through September 2021.

Yet officials didn’t just pick the most decrepit to remediate. Of the top 2,798 properties by percentage of taxes owed, few ended up in the land bank.

Whole categories were excluded, including trailers, even though trailers were one of the top residences behind on property taxes.

In absolute numbers, parcels going to the land bank in African-American neighborhoods far outnumbered those in school districts where most students are white: just 72 properties in majority-white school districts, compared to 2,721 in districts of color.

Keeping the amount owed and the school district constant, parcels were more likely to end up in the land bank if they had a greater number of parcels worth $10 million or more within 500 meters (1,640 feet ) of their location.

Al Jenkins’ properties are within 500 meters of the Cleveland Clinic. Patricia White is even closer.

“This sickens me,” said Patricia White, whose house abuts a new development.

She said her father lived in the apartment complex formerly on the site, which fell into disrepair in the 1990s.

“There isn’t a whole lot of affordable housing.”

According to the National Land Bank Network at the Center for Community Progress, there are over 200 land banks nationwide. Eighty-two of those are Ohio county land banks, and several Ohio cities have land banks as well.

Land banks started in Colorado in the 1970s. They were later adopted, particularly in rust-belt communities, which kept expanding their reach. In 2009, Ohio passed S.B. 353, allowing a “new breed of county land bank.” In the words of creator Gus Frangos, they became land banks “on steroids.”

“This new class of CIC — a county land bank — not only embraces economic and industrial development, but also community development, which is often necessary to jump start or ‘set the table’ for economic development,” Frangos wrote in a 2018 continuing legal education course on land banks.

Various studies show they may stabilize housing prices, and very little funding comes from taxpayers. The bulk of their revenue flows from tax-delinquent properties.

“The key problem in a place like Toledo is the changes that happen in industrialization. We just have too many buildings for our community. So in 1970, the city of Toledo had 384,000 as a population. By 2019, that number had dropped to 273,000. So we saw an over 25 percent diminution in the population in 50 years," said Shelley Cavalieri, a property law professor at the University of Toledo.

"Now, it’s econ 101 to recognize that if you have housing for nearly 400,000 people but only humans close to 300,000, you have an oversupply in housing and insufficient demand. So the thing that the land banks did, by altering the number of properties within the city, they drove property values back up.

“Distressed properties lower the sale of nearby homes by something like 5 percent. When the land bank takes possession and does some basic mowing and boarding, it reduces that by about a percent. Once a demolition goes through and a vacant lot is owned by a land bank, it reduces that by another 2 percent,” Cavalieri said.

But land banks have also created tension between officials with more decrepit properties than they could ever remediate versus residents who always consider their neighborhoods a top priority.

That gripe is particularly loud for land bank recipients perceived to have cut in the line.

In 2012, the land bank gave a parcel to East Cleveland, which again gifted the land to Pontikos in 2017. Once more, he transferred the parcel to his solely-owned 14042 Superior, LLC in 2019. East Cleveland, Pontikos- and Frangos did not respond to requests to comment.

The Cuyahoga County land bank said they have a detailed conflict-of-interest policy.

“The Cuyahoga Land Bank evaluates available properties on a case-by-case basis to determine whether the acquisition of the property would further the Land Bank’s mission under its agreement and plan with Cuyahoga County," said Douglas Sawyer, Assistant General Counsel for the Cuyahoga County Land Reutilization Corp. "We also take guidance from our community partners such as local government officials, community development corporations, faith-based, and other non-profit corporations that are doing community development work.

“The Coventry Park Apartment properties you are referring to were forfeited to the State of Ohio after they went through tax foreclosure and did not sell at sheriff’s sale. Mr. Pontikos’s company contacted the Land Bank and expressed interest in acquiring the properties through the Land Bank so that his company could renovate the properties and get them back into productive use.”

Land bank staff found Pontikos well qualified and financially capable of undertaking the large amount of work necessary to get these properties renovated and productive again. Land Bank staff knew Pontikos was an extended relative of Frangos and concluded that this fact did not disqualify his otherwise-qualified company from transacting with the land bank.

In exchange for the company’s promise to renovate the properties, the land bank agreed to acquire the properties from forfeiture and sell them to the company for a total of $50,000. (The county’s website show a sales amount of $0 because transfers out of a county land reutilization corporation are exempt transfers and therefore no sale price is inputted by the county at time of transfer).

The properties were successfully renovated and now generate almost $85,000 per year in real estate taxes. Transfers such as this one are exactly what the Land Bank is charged with doing – getting distressed tax foreclosed and forfeited properties back into productive use,’ he wrote

Yet of the top 281 worst offenders that year in terms of the amount of taxes owed, just seven were actually foreclosed upon. Those 281 parcels owed an average of $77,820 and a median $53,345. Three years later, 80.9% of them are still delinquent.

Unlike Cuyahoga County, in Montgomery County, for two parcels owing approximately the same amount, proximity to the most-expensive real estate didn’t matter — and neither did the racial composition of the school district.

Again, between two parcels owing the same tax debt, those in majority-white school districts were more likely to get picked.

But Columbus has had the opposite problem with its housing stock: a growing population and too few houses, particularly affordable ones. According to the U.S. Census, between 1970 and 2020, Cuyahoga County’s population dropped 26.5% from 1.7 million to 1.3 million. Franklin County, in the same time period grew 58.9%, from about 800,000 to 1.3 million.

Of the 63,685 unique parcels behind on property taxes in the past three years, just 490 went to the land bank, 187 of which still exist to geolocate. The biggest factor that went into homes marked for the COCIC was again the percentage of taxes owed compared to lot value — but surprisingly, the lower the taxes, the more likely the model predicted its entrance into the land bank.

The majority (150) were in minority school districts. But among homes owing the same amount, parcels in majority-white school districts were more likely to go to the land bank. So were parcels within a mile of a parcel worth at least $10 million.

The city has targeted certain areas such as Linden, but that doesn’t mean they can fix the affordable-housing problem, said Michael Wilkos, Senior Vice President of Community Impact at the United Way of Central Ohio, who studies this area to see where to send donation dollars.

“Every single structure can be saved if you want to put a lot of money into it. But there are market constraints on that. There was a lot of housing stock in Linden that had been vacant for so long that it had deteriorated to the point where its salvation was unlikely, ” he said.

Wilkos said that unaffordability comes from chronic underbuilding in the Columbus area for the past decade and not enough wage growth to catch up to rising rents.

"How can we as a community have some vacant lots, constructed with houses, and bring some vacant houses back to life? How can we keep them affordable? So you don’t experience gentrification. So that’s why I can say with a high level of support, Columbus needs a strong land bank.”

Source Brand Solutions is hiring for an Account Executive