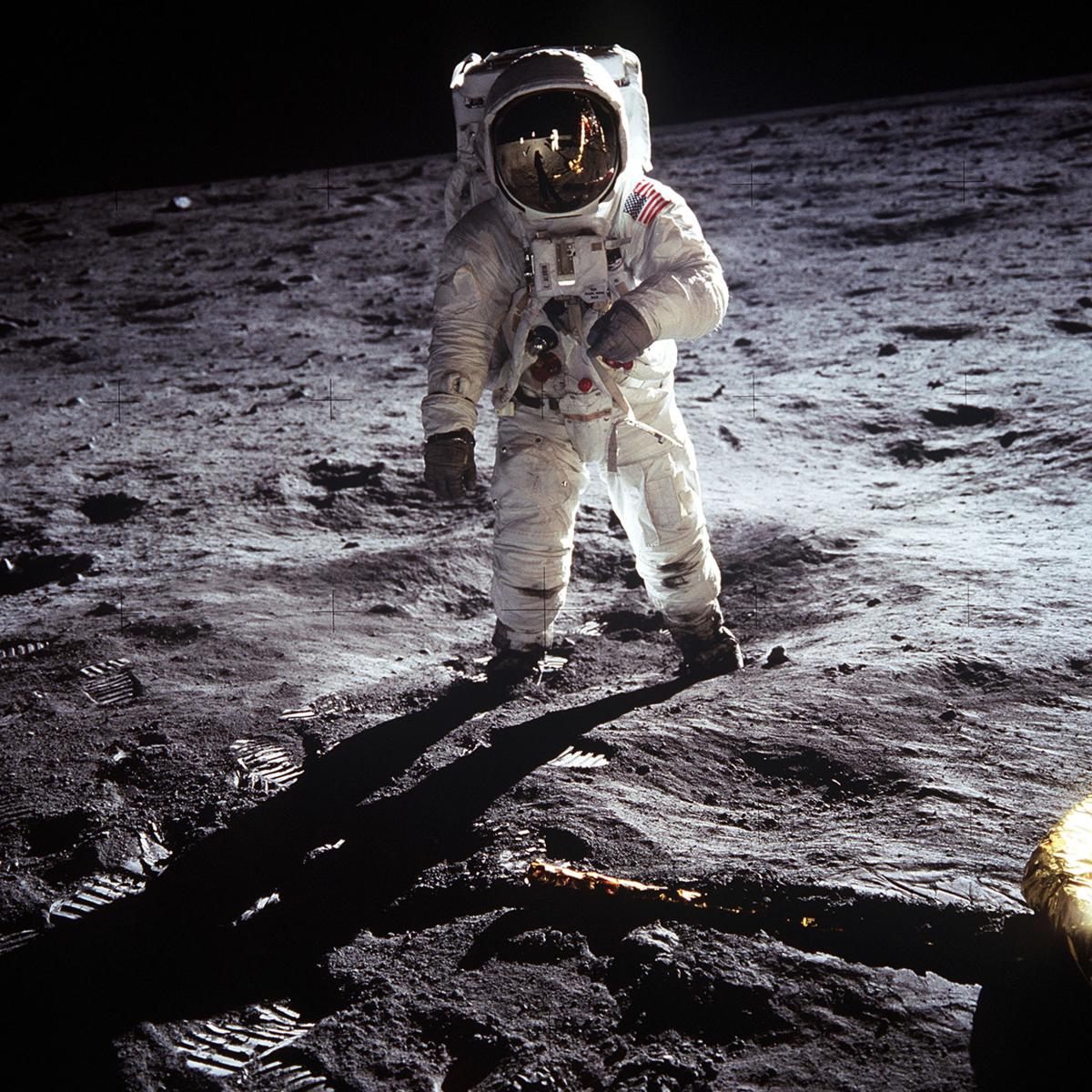 Edwin E. "Buzz" Aldrin Jr. walks on the moon in this photograph taken by fellow astronaut Neil Armstrong. Aldrin stepped into the lunar surface about 19 minutes after Armstrong. 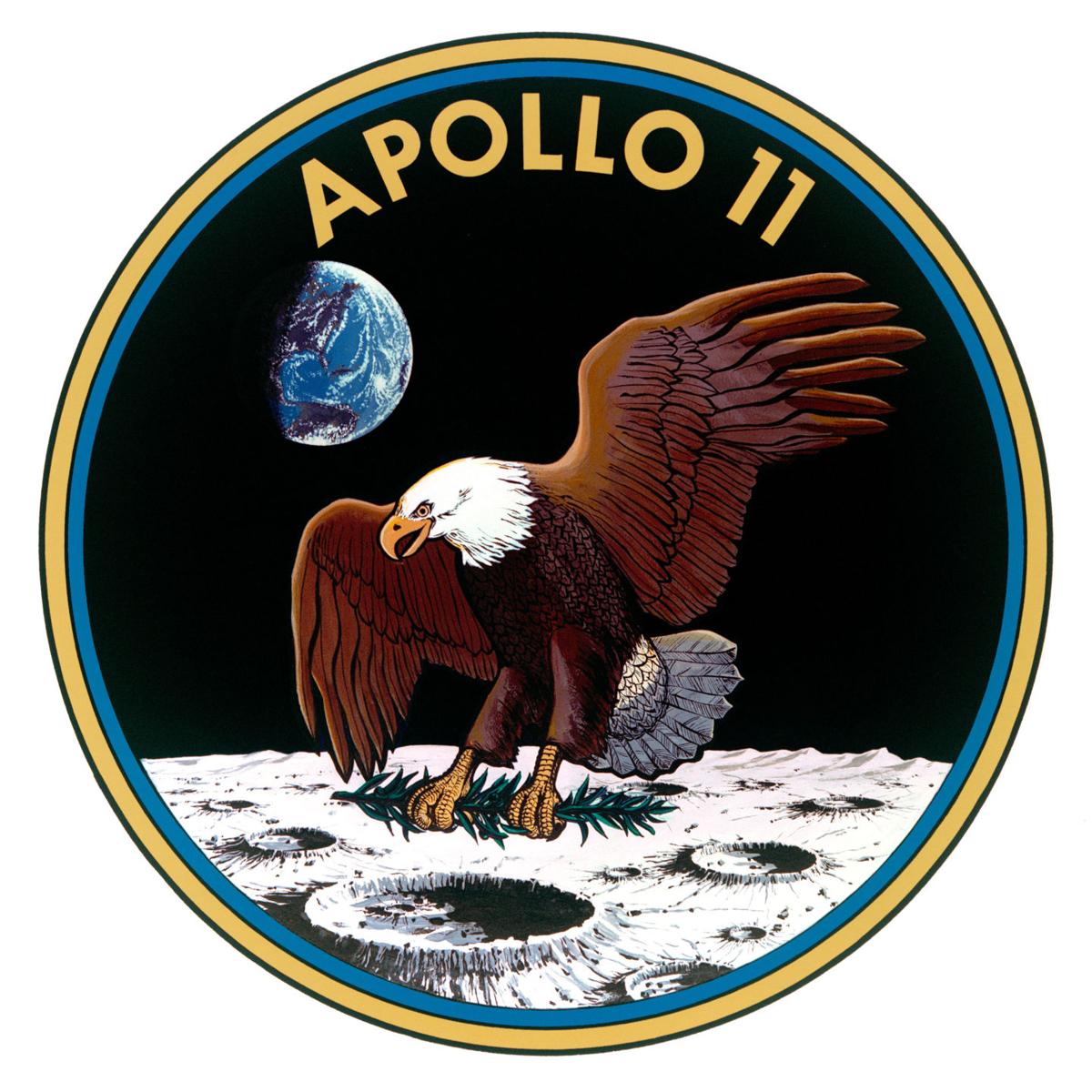 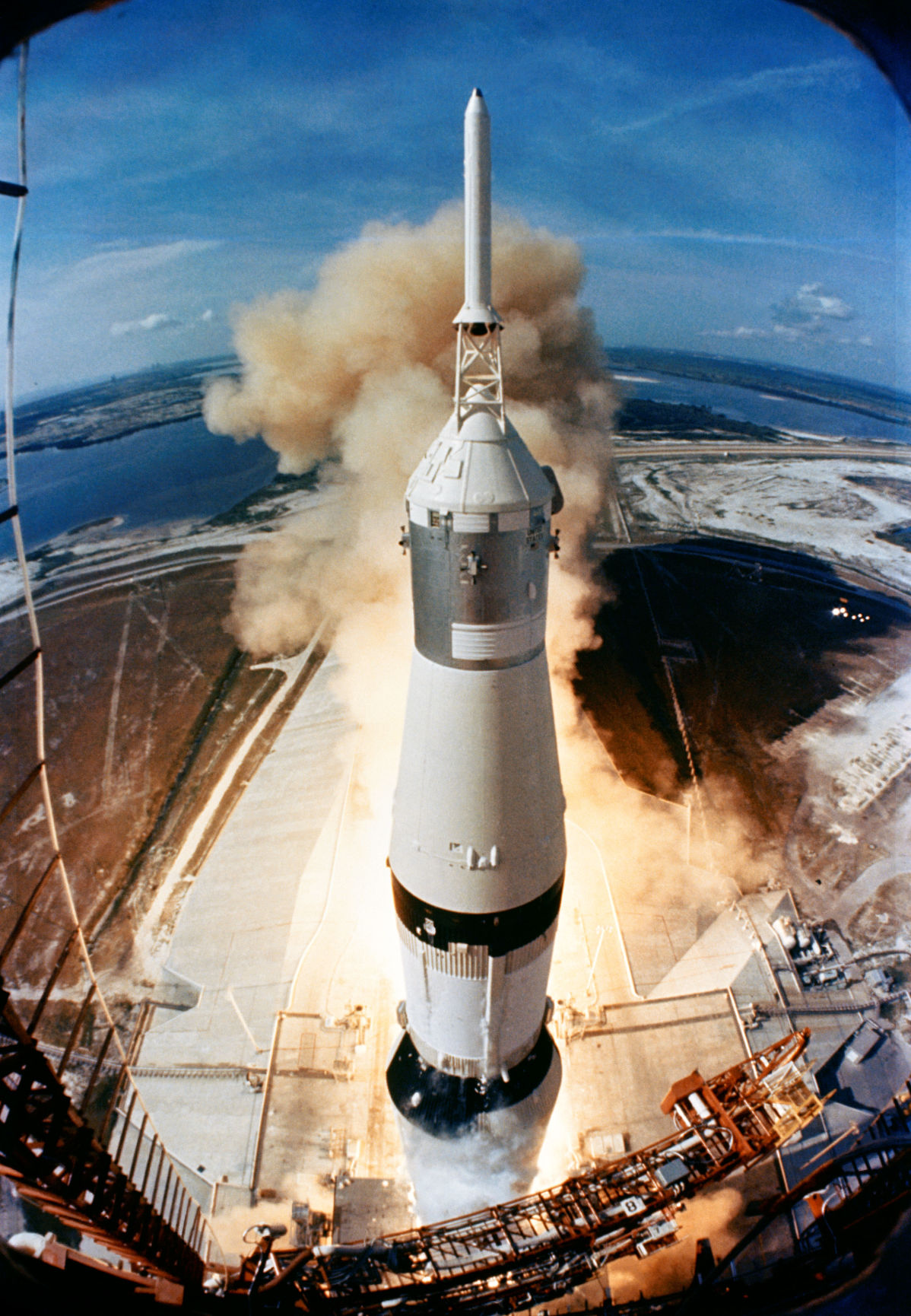 Apollo 11 launches from Cape Kennedy on July 16, 1969, taking its crew of three American astronauts to the moon. 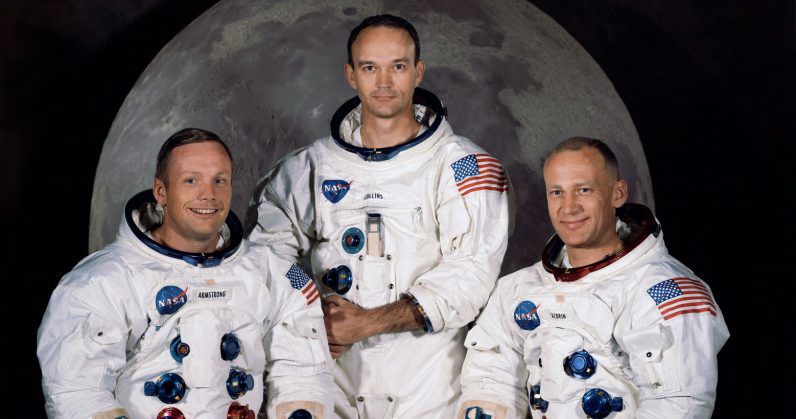 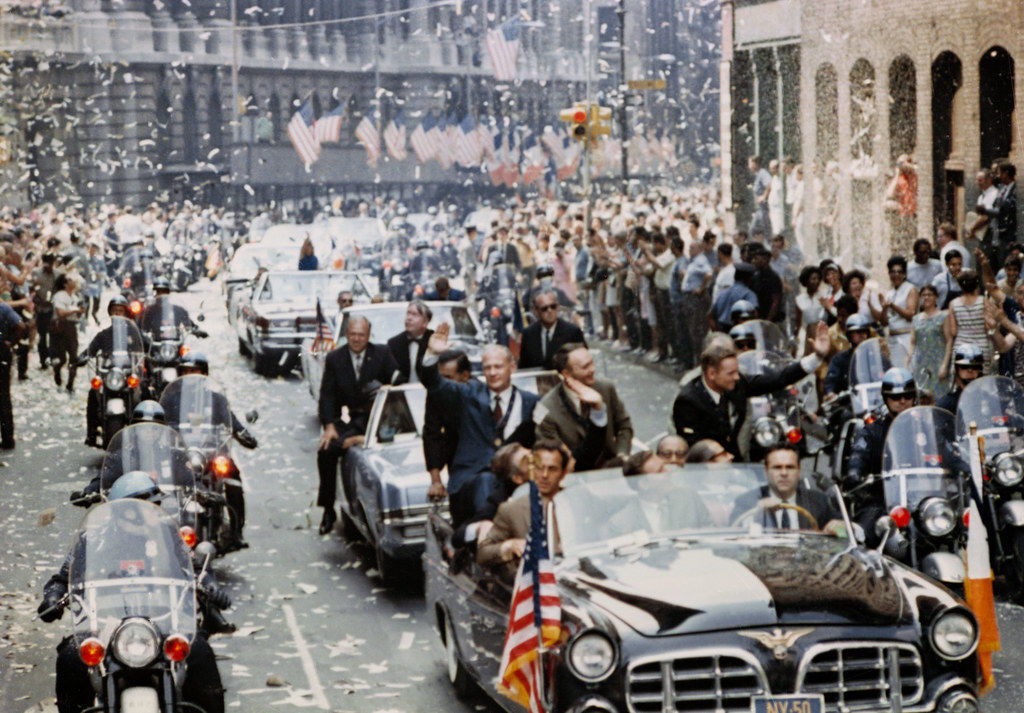 The crew of Apollo 11 is welcomed home with a ticker-tape parade in New York City.

(EDITOR'S NOTE: This is Part 3 of a 3-part series that looks at the 50th anniversary of the Apollo 11 moon landing on July 20, 1969. Part 1 published Thursday and Part 2 published Friday.)

It was one of the most exciting -- and grueling decades -- in American history. A relatively brief span of time that excited and galvanized the United States, and much of the world, in technological, emotional and even spiritual ways that have seldom been matched.

Even as political turmoil, political assassinations, protests and an age/cultural divide engulfed the country during the searing heat of the war in Vietnam, American scientists and astronauts went about the task of fulfilling a goal a young U.S. president promised to Congress in 1961 -- and then defiantly repeated in a Houston football stadium in 1962.

Kennedy told lawmakers that America "should commit itself to achieving the goal, before this decade is out, of landing a man on the moon and returning him safely to Earth."

There were countless missteps, miscalculations and tragedies along the way. The 238,900-mile trip to the moon was literally paved in American treasure, blood, sweat and tears.

Project Mercury put Americans into space. Project Gemini taught astronauts how to live and work in space. Early Apollo missions demonstrated how to get to the moon.

It was a veteran crew, all of whom had military flight experience. Armstrong, then 38, piloted Gemini 8, the mission in which two vehicles docked in space for the first time. Aldrin, then 39, was the first astronaut with a doctorate to fly in space. Aldrin piloted Gemini 12 and performed a 140-minute space walk. Collins, 38, piloted Gemini 10 and spent almost 1.5 hours outside the craft on a spacewalk.

Each of the three astronauts carried along noteworthy personal items. For example, Armstrong's kit contained a piece of wood from the Wright brothers' 1903 Wright Flyer's left propeller and a piece of fabric from its wing. He also took along a diamond-studded astronaut pin, honoring the crew of the ill-fated Apollo 1 crew.

Within a few hours of lift-off, another rocket burn pushed the spaceship out of orbit and toward the moon.

The journey took three days and included several necessary steps, including the successful and delicate separation, turning, and docking of the command service module, Columbia, from the lunar service module, Eagle. The effort included a worrisome period of time during which radio contact with the astronauts was lost.

On July 20, Armstrong and Aldrin in the lunar module separated from the command module to begin their descent to the moon below.  Collins was left in orbit to wait and hope for his comrades' return, alone with his own worries.

Almost immediately, there were problems as the computers indicated a "1202" program error that had ground controllers and astronauts trying to determine its nature.

According to Space.com, Armstrong asked controllers for more information.

"Give us a reading on that program alarm," Armstrong said. He sounded tense, but no more so than during the simulations. It was hard to grasp that a life-or-death struggle was playing out 240,000 miles from Earth, in a small, fragile machine descending rapidly to the moon. Communications were spotty; the computer was threatening to quit, and Gene Kranz, the flight director for this first lunar landing, felt Mission Control slip a bit further behind the power curve.

The decision to continue was made, as long as the error message remained intermittent.

But as Armstrong took over manual control, another problem developed. The Eagle and its two-man crew were not where they were supposed to be.

Between the lumpy gravity of the moon and some extra speed picked up when they undocked from the Command Module, the Eagle had overshot the predicted landing zone.

As Armstrong piloted and studied the lunar surface, all he saw was a huge field of craters and boulders. Low on fuel, he leveled off and searched for a new spot to land.

As controllers counted down to the time of a mandatory abort due to low fuel, Armstrong, a Navy pilot born and raised in Wapakoneta, Ohio, focused on his task.

"We heard the call of 60 seconds, and a low-level light came on. That, I'm sure, caused concern in the control center," Aldrin recalled with a smile. "They probably normally expected us to land with about two minutes of fuel left. And here we were, still a hundred feet above the surface, at 60 seconds."

Kranz recalled, "Then there's another call for 30 seconds. And at about that time, you know, you really start to suck air, and I'm seriously thinking, now we have this land-abort decision that the crew is faced with. Are they going to have sufficient fuel to land on the moon, or are they going to have to abort very close to the lunar surface?"

Aldrin recalled Armstrong, who earned his pilot's license at age 16 and flew 78 combat missions during the Korean War, had no plans to abort. There was also no panic in Aldrin, a Korean War fighter pilot with 66 combat missions who shot down two Russian MiG-15 aircraft.

"When it got down to 30 seconds, we were about 10 feet or less (from the surface)," Aldrin said. "I could sneak a look out, because at that point, I don't think Neil cared what the numbers were. He was looking at the outside. I could see a shadow of the sun being behind us."

The engines were kicking up so much fine lunar dust that the shadow and boulders rising up from the haze were all Armstrong could use to gauge the remaining distance to the surface.

Suddenly, the long metal rod that extended down from Eagle's landing legs touched the surface. A blue light came on the astronauts' console — "CONTACT LIGHT."

"Houston, Tranquility Base here … the Eagle has landed," Armstrong said with a calmness that belied the situation.

For the next two hours, the two astronauts remained in the module and checked systems, configured the craft for its stay on the moon and had a bite to eat. 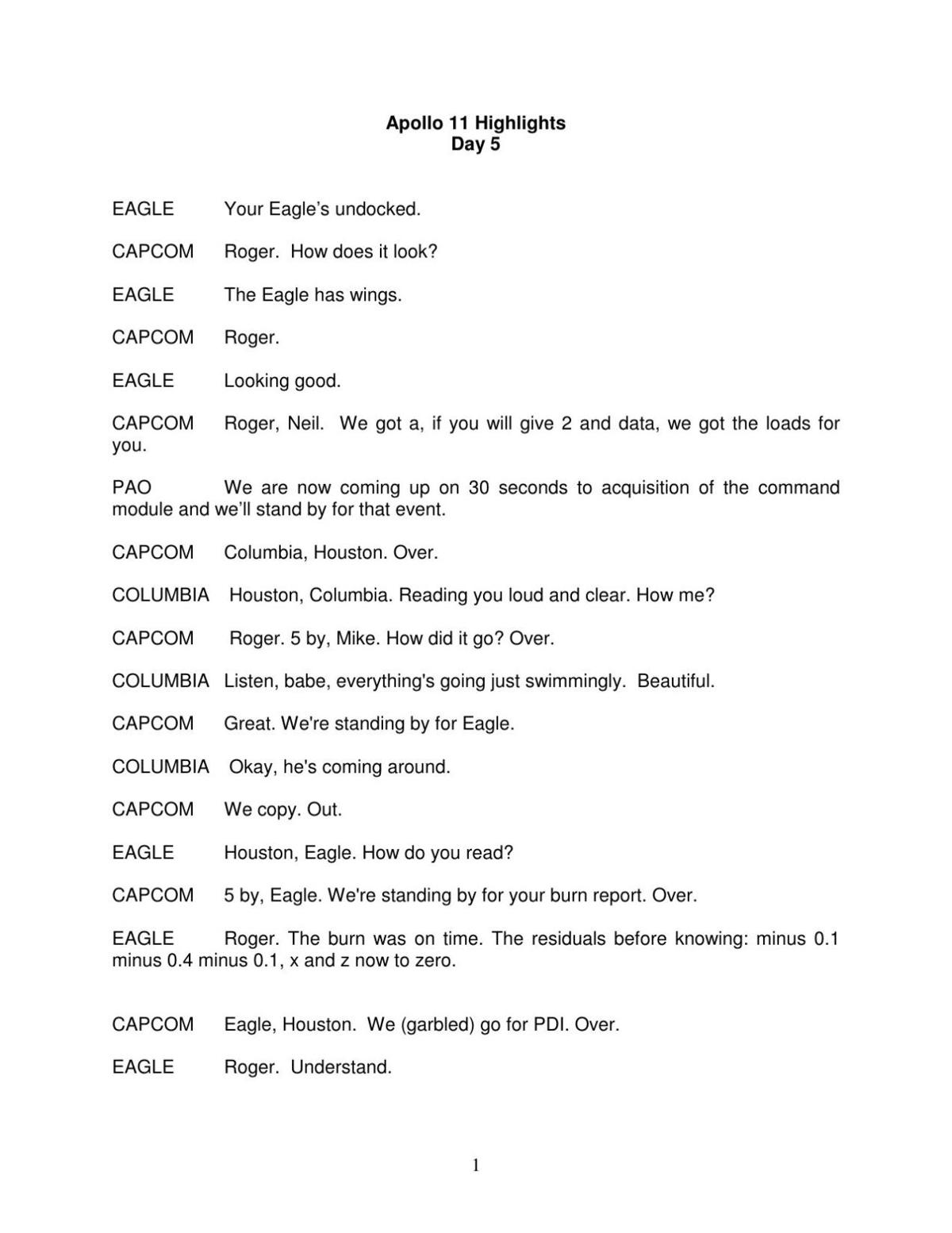 In consultation with NASA, the two men decided to skip their scheduled four-hour rest and chose to go outside and explore the moon's surface instead.

A video camera in a panel inside the Eagle provided live coverage as Armstrong descended a ladder at 11:56 p.m. and uttered the words, "That's one small step for man, one giant leap for mankind."

When Aldrin reached the surface, his first words were, "Beautiful view."

Armstrong replied, "Isn't that something? Magnificent sight out here."

The astronauts explored, conducted experiments, collected rock and soil samples, spoke with President Richard Nixon and left behind mementos of the visit, including a plaque on the ground that said:

HERE MEN FROM THE PLANET EARTH

FIRST SET FOOT UPON THE MOON

WE CAME IN PEACE FOR ALL MANKIND

Armstrong and Aldrin also left memorial medallions with the names of several American astronauts and Russian cosmonauts who had perished in flight and in training (including the Apollo 1 crew and the first person in space, Yuri Gagarin).

After 21.5 hours on the moon, the lunar module blasted off the lunar surface, rejoining Collins in Columbia. The Eagle was jettisoned in space and the crew of Apollo 11 headed home.

On July 24, at 12:50 p.m. Eastern time, the capsule splashed down into the Pacific Ocean and was recovered by the USS Hornet. Total mission time was 195 hours, 18 minutes and 35 seconds, just over eight days in space.

Armstrong, who spent most of the rest of his life (dying in 2012) shunning publicity, downplayed his own role in the flight.

"We had hundreds of thousands of people all dedicated to doing the perfect job, and I think they did about as well as anyone could ever have expected," he said. "The important achievement of Apollo was demonstrating that humanity is not forever chained to this planet and our visions go rather further than that and our opportunities are unlimited."

There would be many additional successes -- and tragedies -- to come in the American space program in the years and decades ahead. There would be more moon landings, space shuttles, space stations.

There would be more accidents and more astronaut deaths. Space exploration will never be considered routine or easy.

All of that was still to come. But in July of 1969, America stood proud. Its space program had delivered on the promise made years earlier by a young president whose vision went far beyond Earth.

We asked Richland Source readers to share their memories of July 20, 1969 -- the day man first landed and walked on the moon. We are delighted to share those memories here.