COLUMBUS – Ohio Governor Mike DeWine announced Monday that he is awarding more than $2 million in grant funding to support local law enforcement in their work to disrupt the drug trade in Ohio and enhance their role in substance use awareness, prevention, and recovery.

Grants from Governor DeWine’s RecoveryOhio Law Enforcement Fund will be provided to 27 existing drug task forces to intensify their efforts to identify high-level drug traffickers; dismantle large drug trafficking organizations; interrupt the flow of money and drugs from Mexican cartels; and prevent the sale of illegal narcotics to those suffering from substance use disorder. 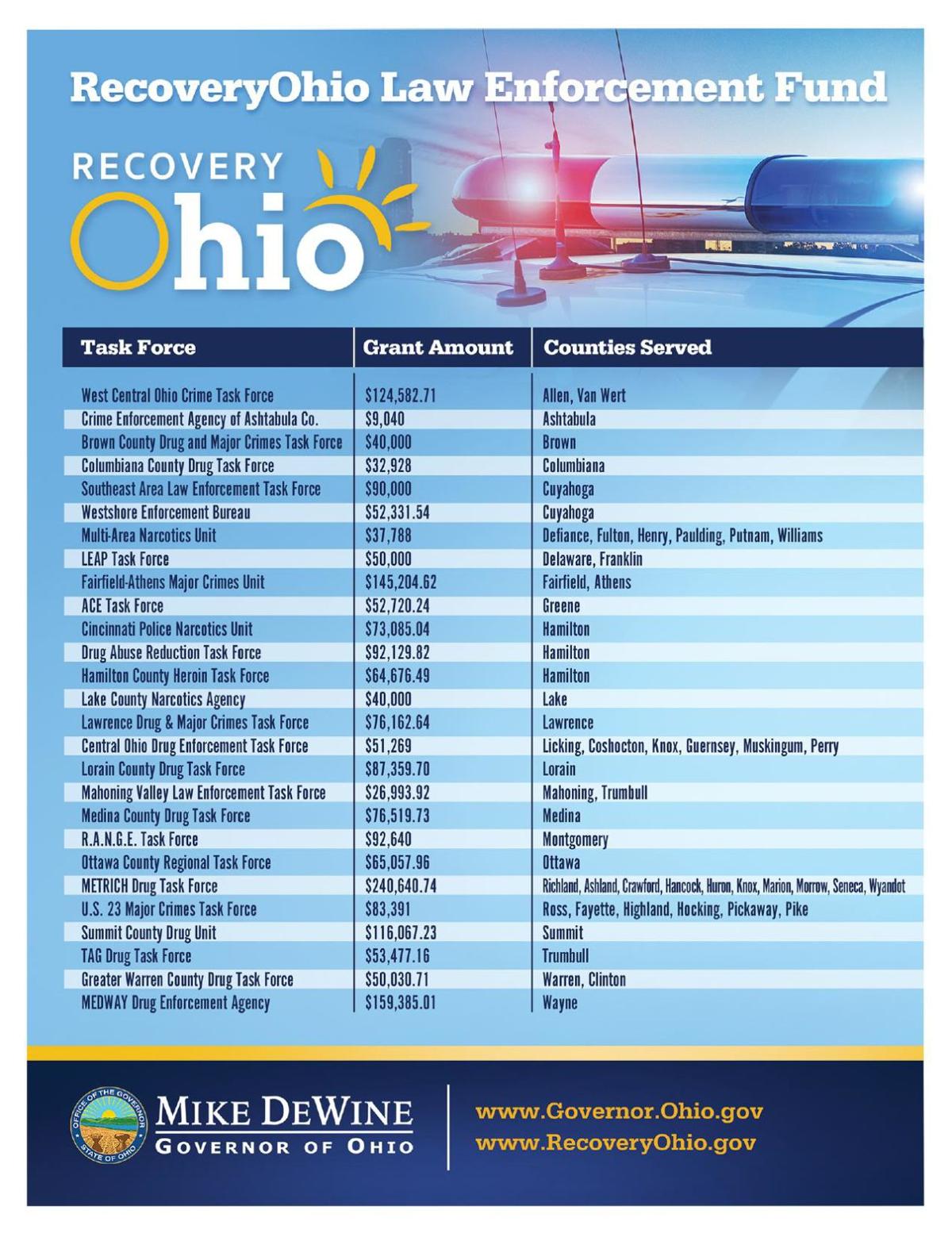 Funding will also be used to support the mission of Governor DeWine’s RecoveryOhio initiative which aims to increase substance use and mental health awareness, implement age-appropriate prevention education in schools, connect those who need help with treatment, and promote recovery.

Examples of programs that will be created or expanded with RecoveryOhio Law Enforcement Fund grants include:

METRICH Drug Task Force ($240,640.74) will use funds toward equipment for enforcement operations conducted in its 10-county region. Funds will also go toward creating new quick-response teams and expanding teams currently at work in their region. A 10-county billboard and radio awareness campaign will also be developed.

Fairfield-Athens Major Crimes Task Force ($145,204.62) will use funds to target large-scale drug trafficking organizations trafficking methamphetamine, heroin, fentanyl, and other drugs. They will also host a statewide conference to highlight the benefits of coupling quick-response programs with drug enforcement. The conference will provide tools to drug task forces and service providers to help them implement quick response teams. They will also purchase naloxone kits for distribution to the public.

Lake County Narcotics Agency ($40,000) will use grant funds to target violent drug offenders and areas that have experienced violent drug-related crimes. Funds will also be used to develop a train-the-trainer drug education program for schools to enable school districts to provide awareness and prevention instruction.

Westshore Enforcement Bureau ($52,331.54) will use funding to increase the number of students reached with prevention/education programs through their existing Westshore Young Leaders Network. Topics focus on substance use and mental health issues, including prevention of tobacco, alcohol, and drug use; bullying and suicide prevention; and positive decision-making.

A full list of award recipients can be found at www.governor.ohio.gov.

The program is being administered by the Ohio Office of Criminal Justice Services.