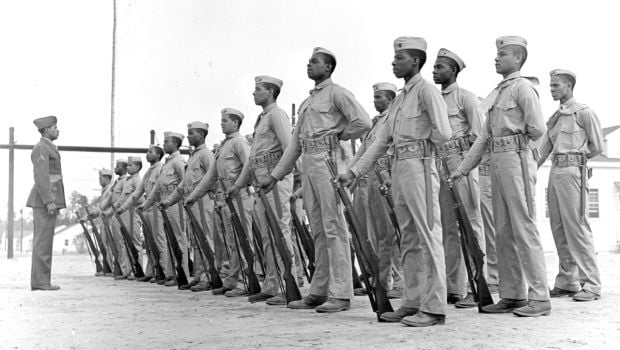 The first African American Marines started training at Montford Point, N.C. They faced many obstacles while in the Corps and were honored with the awarding of the Congressional Gold Medal. Former Mansfield police Chief Lawrence Harper will receive his medal posthumously on Saturday afternoon. 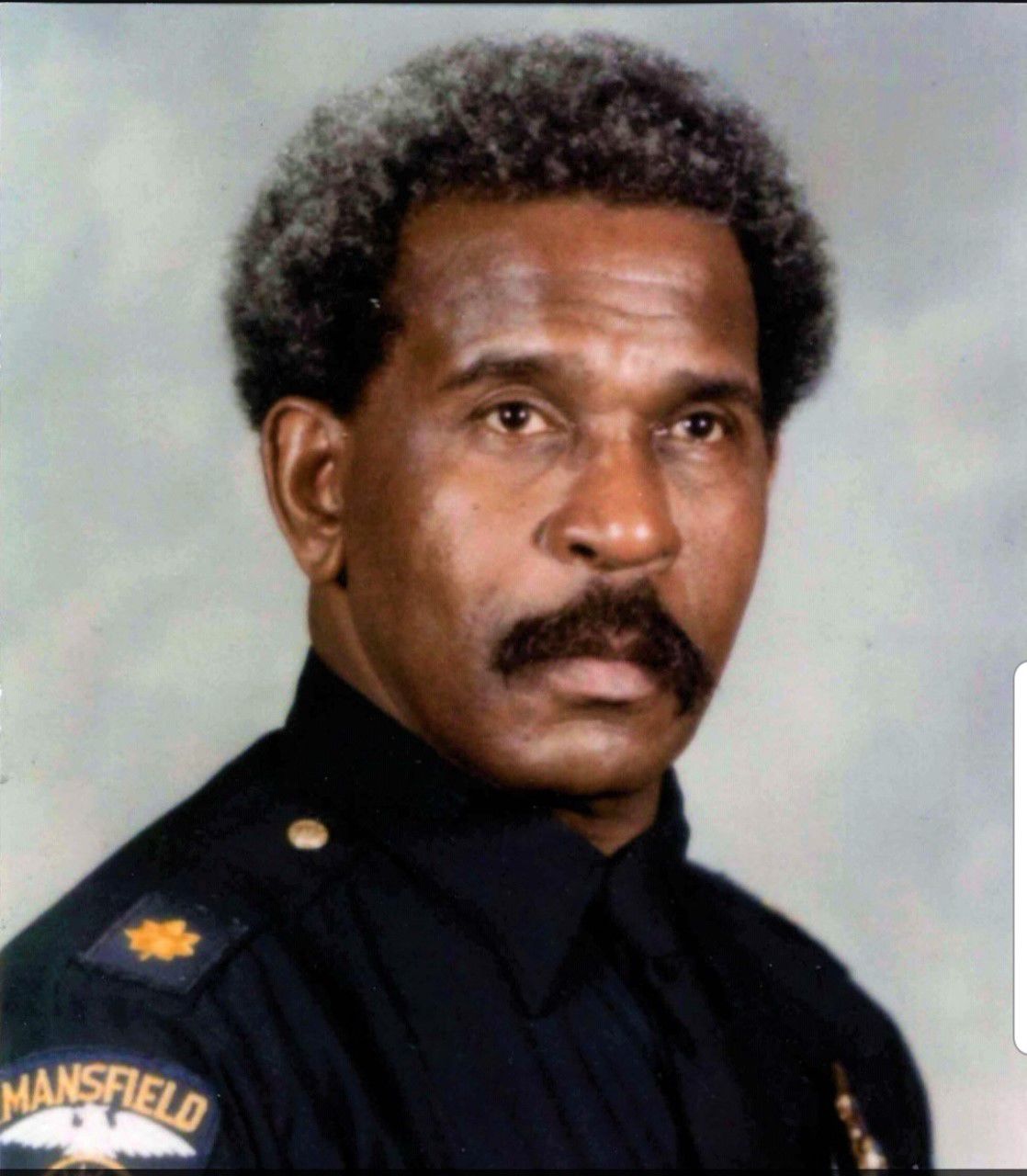 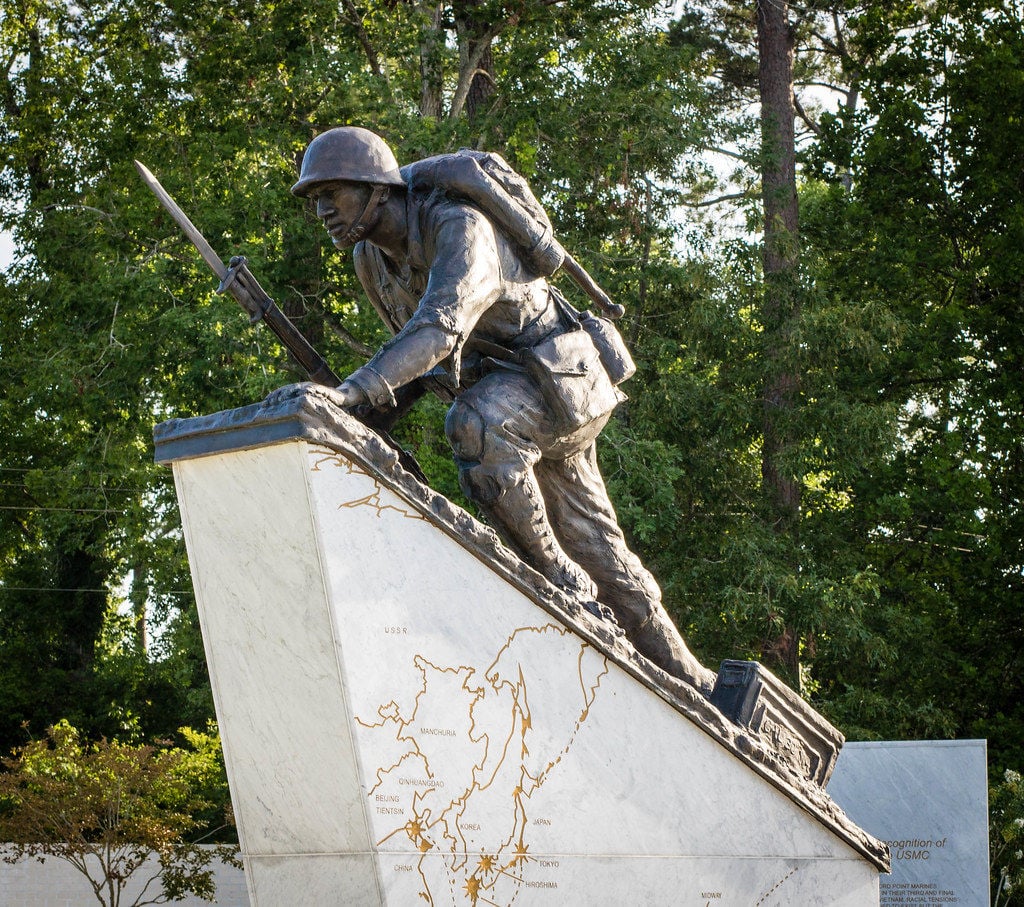 Above is the Montford Point Marine Memorial in Jacksonville, N.C.

How did he know for sure?

His son, Mansfield attorney Roeliff Harper, had made him a pinky promise.

On Saturday at 1 p.m., during a ceremony open to the public at the Dan Lew Exchange in downtown Mansfield, the son will make good on that promise.

Eight years ago, then-President Barack Obama signed into law legislation that collectively awarded Montford Point Marines with the Congressional Gold Medal. The gold medal was awarded to the unit in recognition of their personal sacrifice and service to their country during the war.

The individual Marines who comprised the Montford Point unit are eligible to receive bronze replicas of the Congressional Gold Medal they collectively earned.

Nearly 20,000 black Marines were trained at Montford Point, North Carolina, during the war, completely segregated from their white counterparts. Harper, who joined at age 16, was among the first recruits, enlisting on June 6, 1944 -- also known as D-Day.

The congressional Gold Medal is — along with the Presidential Medal of Freedom — the highest civilian award.

Prior to 1941, the Marine Corps had denied entry to blacks. But that year, President Franklin Roosevelt signed an executive order, establishing the Fair Employment Practice Commission, banning discrimination "because of race, creed, color, or national origin" in all government agencies. Those agencies included the U.S. military.

Then-Sen. Kay Hagan, D-N.C., who helped sponsor the Congressional Gold Medal legislation, said at the time, "These men, who were based out of North Carolina in WWII, served our country with courage and dedication, even in the face of discrimination and intolerance."

The younger Harper read about the award and inquired with his dad, who was born and raised in Mansfield's north side.

"I asked my dad several years ago if he had ever received his medal. He said no, that he hadn't heard about it," said Harper, who will accept the medal on his father's behalf, along with his brother, Dr. Reggie Davis, a neurosurgeon.

Roeliff Harper contacted the Montford Point Marine Association and went through the lengthy process of verifying through service records that his dad was eligible and also verifying he was Lawrence Harper's son.

"It was an ordeal to actually go through all this stuff," Harper said. "But I made my dad a pinky promise and we don't break those in my family. Never have. My mom (Mary Harper) and dad were pretty smart people.  They taught my brother and I that you are only as good as your word, that words are what we live by. Choose your's carefully.

"I made him a pinky promise ... and I am getting that done," Harper said.

A representative from the Montford Point Marine Association will present the medal, along with letters from Obama and the Commandant of the Marine Corps.

"He tried signing up here in Mansfield. He was only 16 at the time. They called my grandmother, Sarah Harper, and told her he was trying to enlist. She went right down there, grabbed him by the ear and walked him home," Harper said.

Undaunted, Harper and a friend jumped on a bus to Cincinnati the following day and signed up.

The Camp Montford Point training facility was part of the larger Marine Corps Base Camp Lejeune. But railroad tracks separated the black Marines from the whites. Segregation was strict.

Harper and his counterparts fought in the Pacific during the war, including the bloody invasion of Okinawa in 1945, a battle that lasted 82 days.

"My father didn't talk about (Okinawa) until about two weeks before he died," Roeliff Harper said. "Then he told me a lot ... which I won't share. I will tell you, he just said 'It was tough sledding.' Those were his words."

What was his father most proud of about his time in the USMC?

"From my dad's perspective, there were things you had to do in order to get to do what you wanted to do," Harper said. "In his mind, everybody was an individual. My dad thought that as a child of God, we all have an opportunity here. We have the opportunity to choose. You can choose to do the right thing or you can choose not to.

"If what you want is grace, you have to learn to show grace. Everybody being a child of God deserves grace. How else will they learn? People learn at their own time and when they are good and darn ready to learn and not one second before. My mom used to say that all the time," Harper said.

Upon returning home after the war with an honorable discharge in 1946, Harper finished high school, graduating in 1947 and worked briefly at Westinghouse.

"Dad used to say on many occasions, 'I lived my life like a cavalry charge,'" Harper said.