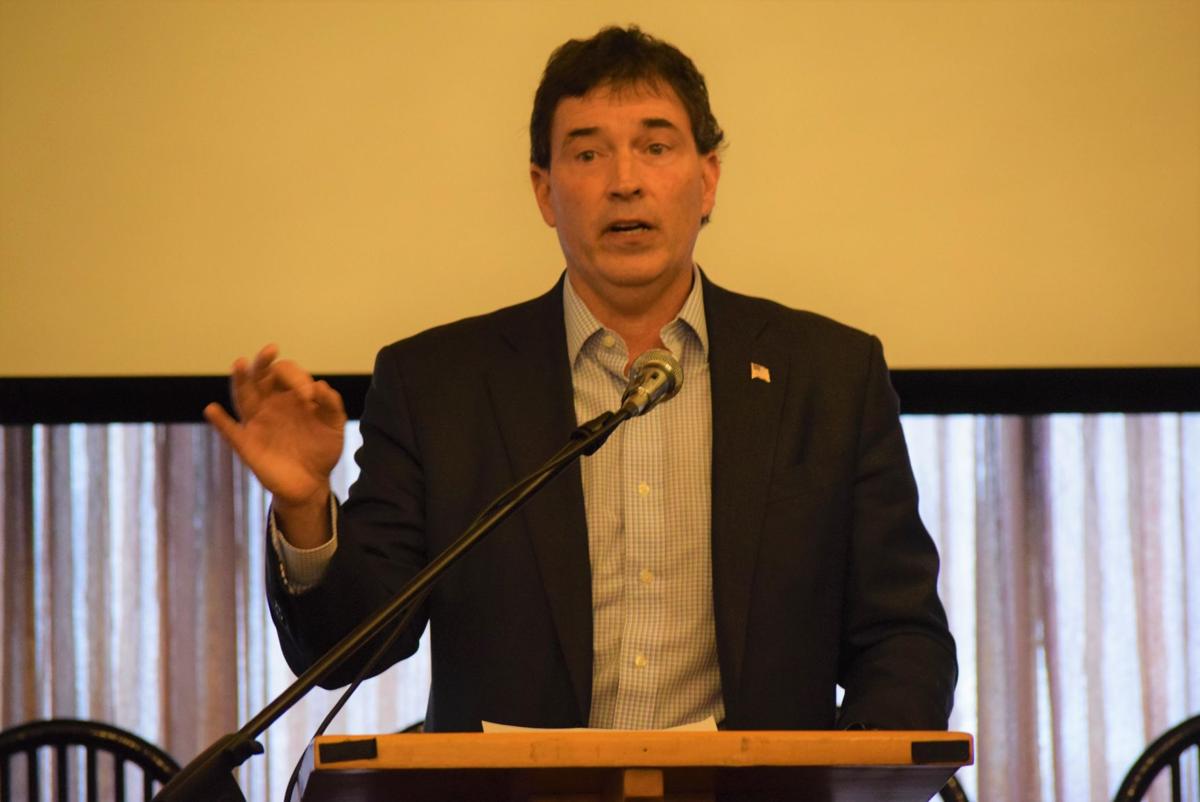 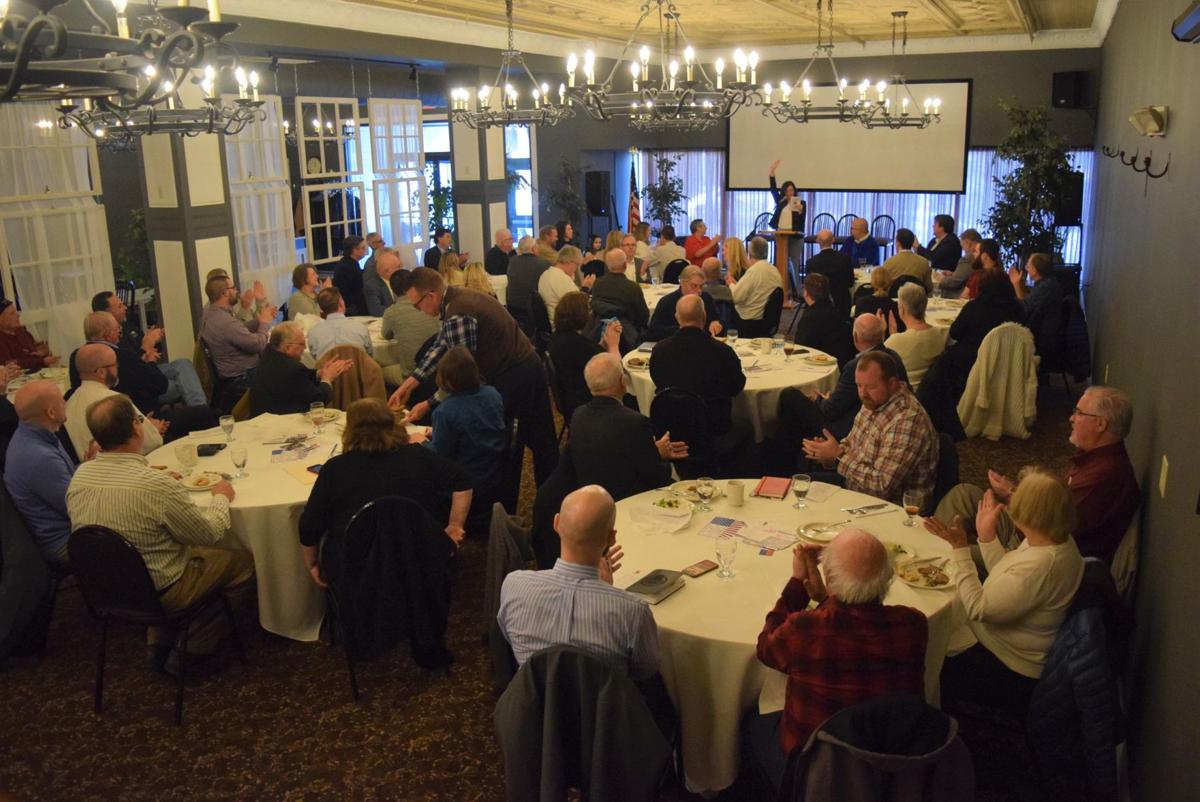 Members of the Richland County Republican Party gather for the organization's monthly luncheon Monday at the Dan Lew Exchange in Mansfield. 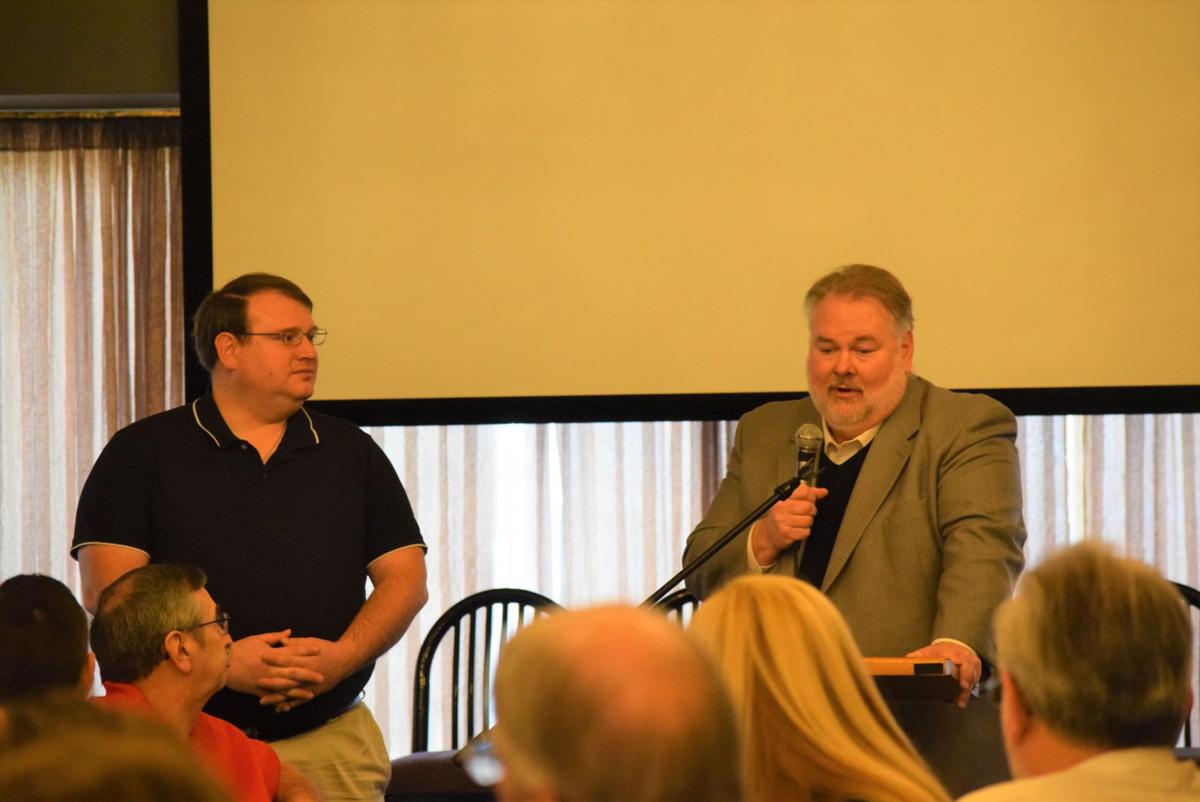 MANSFIELD -- U.S. Rep. Troy Balderson said Monday that President Trump will not back down to Iran in his efforts to defend the United States.

"We will do everything (in our power) to do that. I guarantee you President Trump will not back down," said Balderson, one of three lawmakers speaking Monday during the Richland County Republican Party's monthly luncheon.

The drone strike came in the aftermath of an assault on the U.S. Embassy in Baghdad, a multi-day effort led by pro-Iranian demonstrators.

Balderson said Congress will be briefed again on Tuesday by the administration regarding the ongoing situation in the Middle East.

In his remarks, the first-term congressman also hailed the Jan. 15 scheduled signing of phase one of a new U.S-China trade deal, as well as the U.S.-Mexico-Canada Agreement.

That trade agreement, which has received bipartisan support, was approved by the House in December and could be ratified by the Senate this week. It will replace the 30-year-old North American Free Trade Agreement.

"The USMCA is big for the state of Ohio," Balderson said, saying it could have a $28 billion economic impact across the state, including agriculture and technology.

"It's a very successful agreement and we are all very happy about it," he said.

During a question-and-answer session, Balderson was asked if he understood what House Speaker Nancy Pelosi hoped to gain by delaying sending approved articles of impeachment to the Senate.

"(Pelosi) thinks she can gain leverage. She is absolutely constitutionally wrong. She can't gain any leverage over this. Her process was flawed in the House and she has no right to go to the Senate chamber (and make demands)," Balderson said.

"(Democratic leaders in the House) said Donald Trump was a national threat and they had to get this done now. Well, wrong. So wrong," Balderson said, adding Democrats could have sought more witnesses in the House, but were in too big a hurry to impeach the president.

Balderson said he believes the impeachment articles will be presented to the Senate in the next week to 10 days.

Obhof, beginning his final year in the Ohio Senate due to term limits, said he was proud of the work done during his tenure to reduce taxes and regulations in Ohio.

He said Ohio was among the highest-taxing states in the country when he took office and had lost 400,000 jobs in the four years before he joined the Senate.

"Over the last 10 years, we have cut taxes by $6 billion. The next effect of that is more like $13 billion. We also had specific targeted tax cuts for small businesses so they could grow and expand because they are the majority of employers in Ohio," Obhof said.

Obhof said continuing to reduce state regulations are among his goals over the next 12 months, as well as professional licensure reciprocity with other states that will allow newcomers to Ohio to begin work faster.

Romanchuk, who is campaigning to replace Obhof in the Senate in the 22nd District that includes Richland, Ashland and Medina counties and a part of Holmes County, praised the size of the luncheon audience.

"I have been campaigning in other counties and I haven't seen crowds like this," said Romanchuk, who is among five Republican candidates on the March 17 primary ballot.

Romanchuk is serving his fourth and final term in the Ohio House of Representatives. He represents the 2nd Ohio House District, which comprises all of Richland County.

He is the owner and president of PR Machine Works, Inc., a contract manufacturer providing precision machining, fabrication, and assembly services in Ontario.

Romanchuk said he is also pleased with the tax reform in Ohio, but that more needs to be done to make the state competitive with other states and the rest of the world.

"We are absolutely positive we are moving Ohio in the right direction," Romanchuk said.

Competing with Romanchuk in the Republican primary are Cory Branham of Crestline, Brunswick Mayor Ron Falconi, Timothy Hoven from Brunswick and Michael Reynolds from Wadsworth.

The winner will meet Democrat Steve Johnson of Ashland in the November general election.

Races for the statehouse highlight the March 17 primary ballot for Richland County voters.