MANSFIELD -- The presidential race between incumbent Republican Donald Trump and Democratic challenger Joe Biden will drive voters to the polls on Nov. 3.

Or at least generate a great deal of absentee votes mailed in from residents still concerned about the COVID-19 pandemic, a virus that delayed the state's primary in Marc.

But there are interesting contests and tax issues all through the ballot, which the Richland County Board of Elections has produced. The deadline to file for the Nov. 3 election was Wednesday. 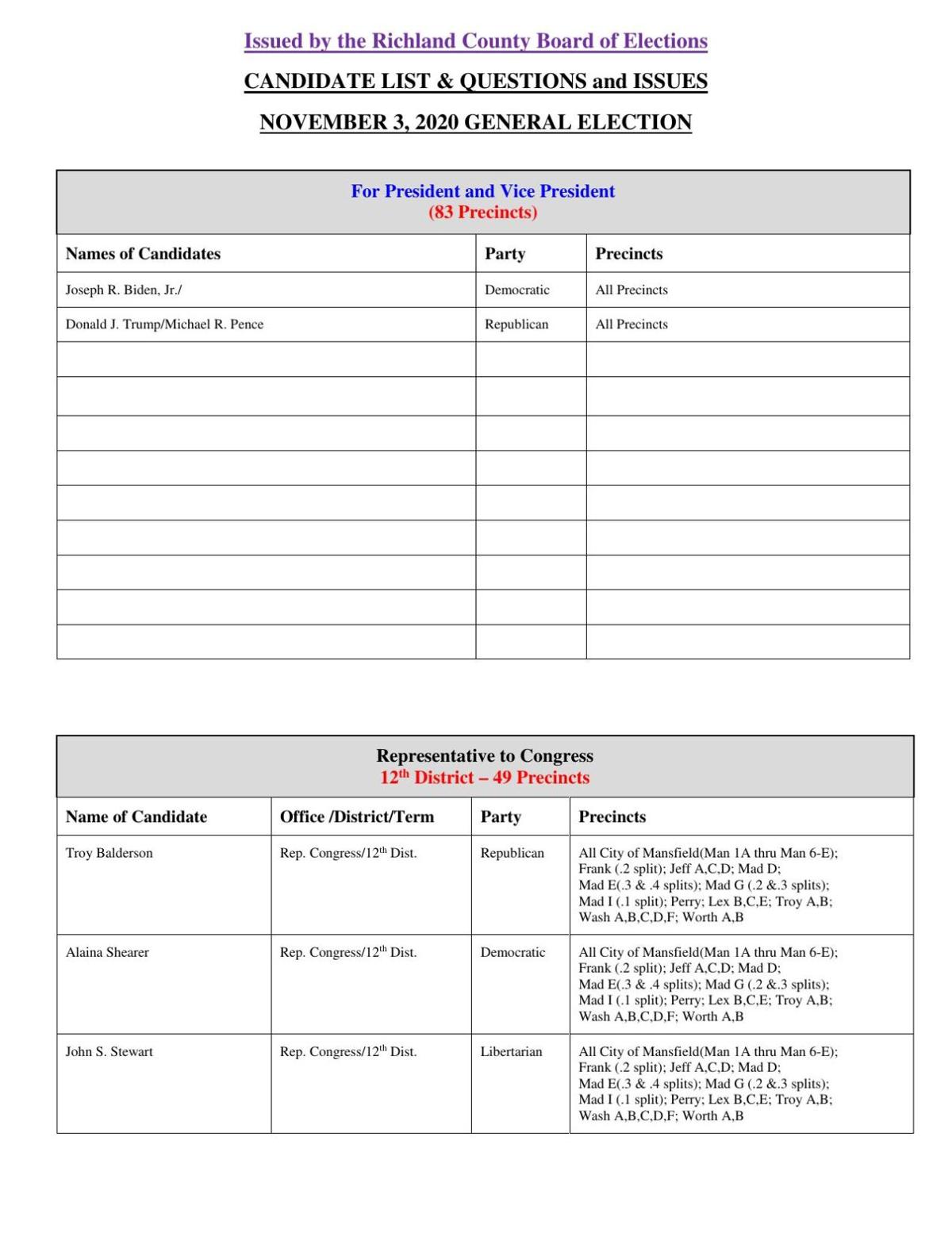 Here is a look at contested races and issues, with the understanding the ballot may be updated as additional candidates are certified by the state or districts;  names of candidates to replace candidate withdrawls are added; or write-ins once that deadline passes.

Incumbent Republican Sharon Kennedy is challenged by Democrat John O'Donnell in this race, which is listed as "non-partisan" on the ballot.

Incumbent Republican Judi French is opposed by Democrat Jennifer Brunner in this race, again listed as "non-partisan" on the ballot.

Incumbent Democrat William Hoffman takes on Republican challenger Jeff Furr in what is offered as a "non-partisan" election.

Republican Mark Romanchuk of Ontario, who is losing his seat in the Ohio House due to term limits, is unopposed in the general election for the seat now held by Sen. Larry Obhof, who cannot run again due to term limits. Democrat Steve Johnson from Ashland has withdrawn from the race, according to the Board of Elections.

Republican Marilyn John, a current Richland County commissioner from Shelby seeking to fill Romanchuk's seat, is opposed by Democrat Sam Grady of Mansfield. The Richland County Democratic Party said it is not "affiliated" with Grady in June and vowed not to support his candidacy after taking issue with some of his social media comments.

Democrat Kirsten Pscholka-Gartner and Republican Kelly Badnell, both from Lexington, are competing to replace outgoing Judge Philip Mayer. A Democrat, Mayer is retiring at the end of this term because Ohio law prevents a common pleas judge from beginning a new term after age 70.

Republican Steve McKinley from Bellville, who was appointed to the bench by Gov. Mike DeWine in March 2019 to fill the unexpired term of retiring Judge Ron Spon, takes on Democrat Rollie Harper of Mansfield.

There is a wide range of issues for voters to decide:

-- The Wishmaker House Bed and Breakfast, LLC, in Bellville has asked permission to engage in Sunday liquor sales between 10 a.m. and midnight, including beer, wine, mixed beverages and spirituous liquor.

-- Mifflin Township is asking for an additional 5-year, 2.7-mill levy for current expenses.

-- Plymouth Township (excluding the City of Shelby and Village of Plymouth) seeks the renewal of a 5-year, 2-mill levy for road maintenance and equipment.

-- Sandusky Township is asking voters to approve the renewal of a 5-year, 2.2-mills levy for fire maintenance and emergency services.

-- Sharon Township (excluding the City of Shelby) seeks renewal of a 5-year, 2-mill levy for fire maintenance and emergency services.

-- Some voters in Mifflin Township will vote on the renewal of an Ashland City Schools 5-year, 1.25-mill levy for permanent improvements.

-- Some voters in Sandusky Township will vote on the renewal of a Galion City Schools 5-year, 7.73-mill levy for current expenses.

What you need to know to vote in Ohio this year

EDITOR'S NOTE: This story was provided to Richland Source by Your Voice Ohio through a collaborative agreement. This is the last in a five-par…

A virtual "Meet the Candidates" night is planned Saturday at 7 p.m., sponsored by the Mansfield NAACP Voter Registration Committee and the North End Community Improvement Collaborative.