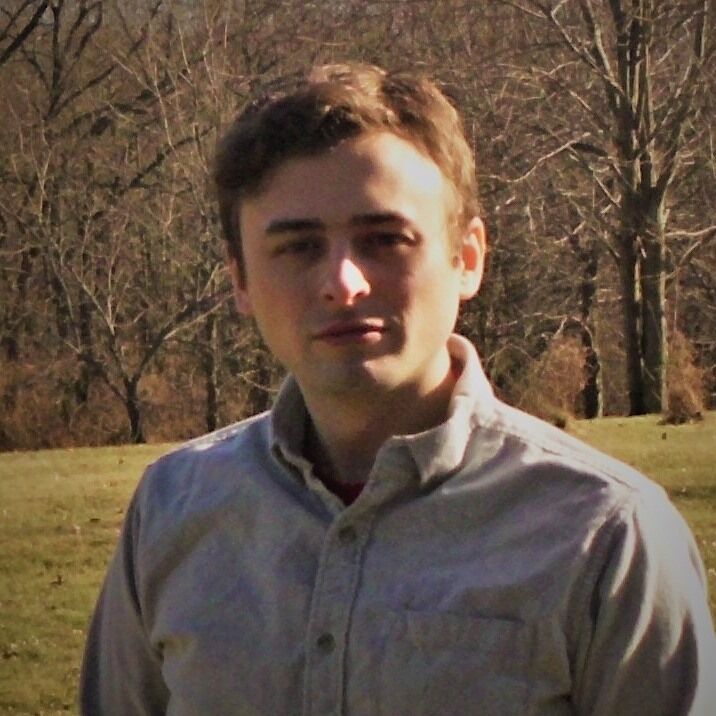 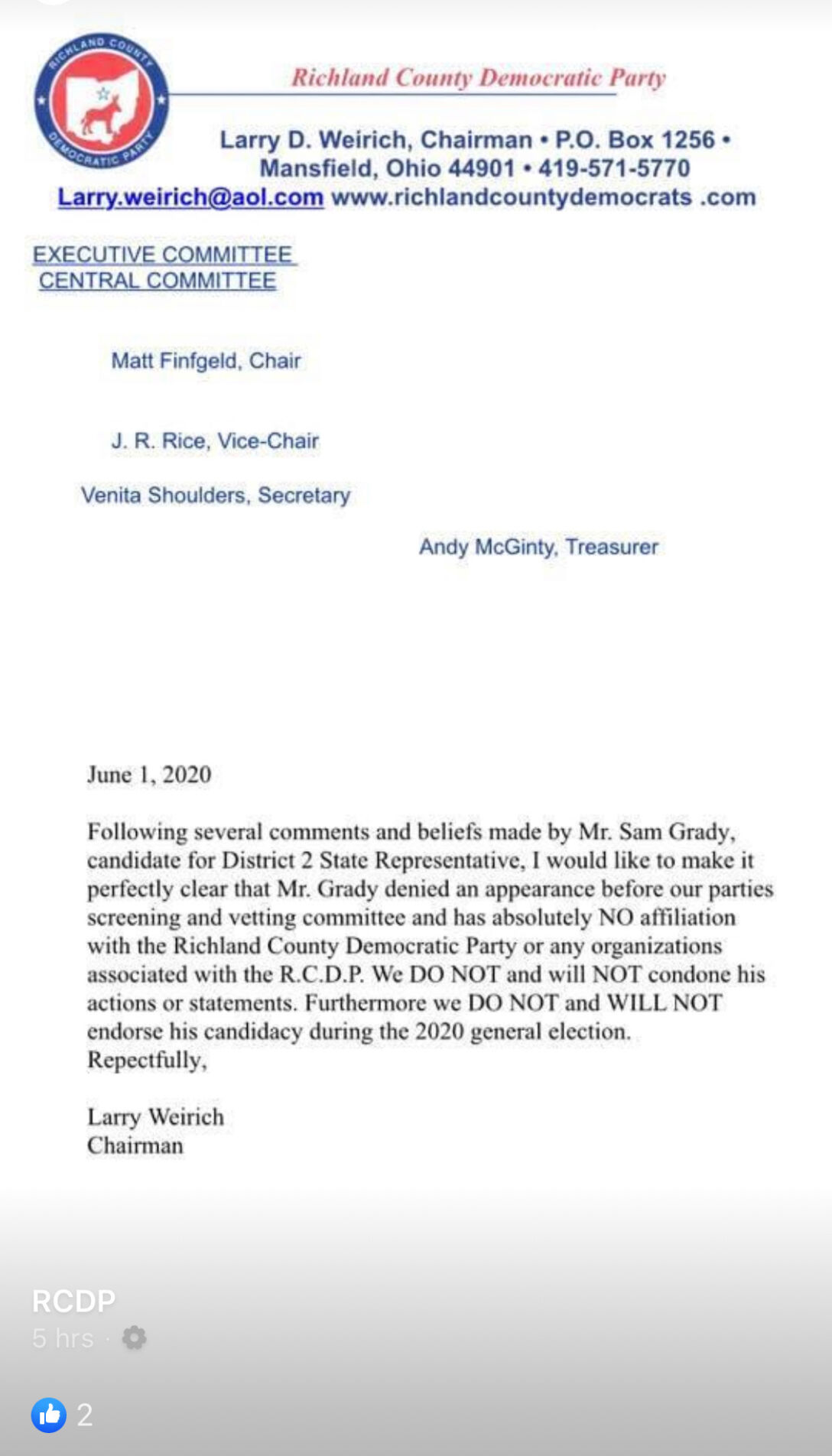 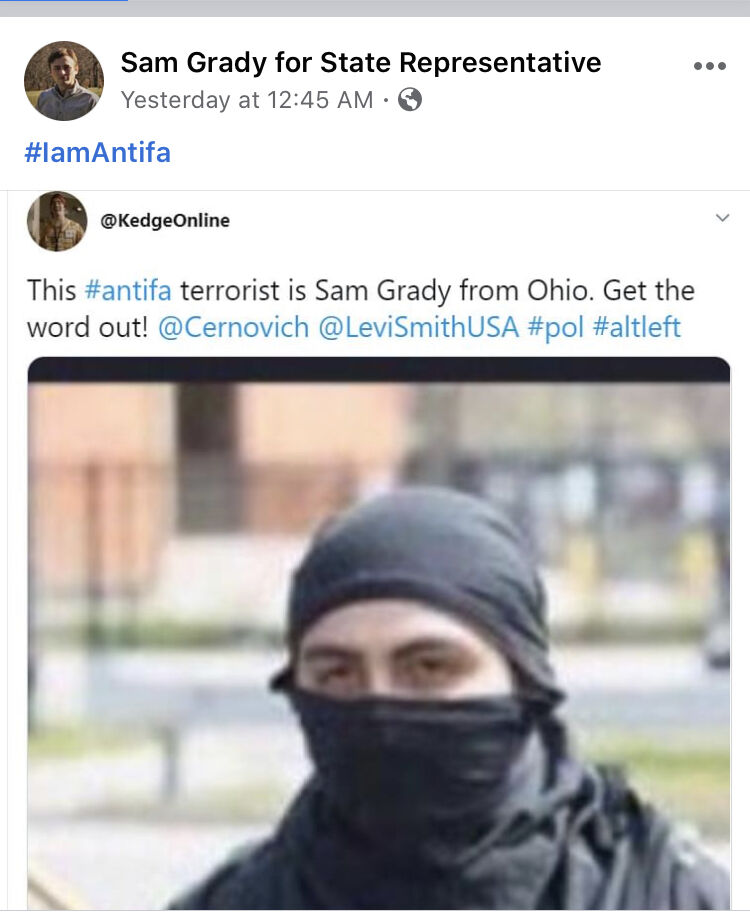 State representative candidate Sam Grady said Tuesday he shared this screenshot of a 2017 twitter post on Facebook that misidentified him to "mock the absurdity of the far-right and their willingness to believe anything while they obsess over identifying 'antifa' members."

MANSFIELD -- The Richland County Democratic Party on Monday issued a statement saying it is not affiliated with Sam Grady, who won the party's primary for the Ohio House 2nd District seat.

The 28-year-old Grady won the Democratic primary that concluded in April.

The district represents all of Richland County and is currently held by Republican Mark Romanchuk, a candidate in November for the Ohio Senate. Grady's name will still appear on the ballot as the Democratic nominee.

Grady is active on social media and has criticized the law enforcement response to citizens protesting the killing of George Floyd by Minneapolis police last week. Some of the protests have become violent clashes between protesters and law enforcement.

The Richland County Democratic Party has no ties to Grady, according to party Chair Larry Weirich.

"Following several comments and beliefs made by Mr. Sam Grady, candidate for District 2 State Representative, I would like to make it perfectly clear that Mr. Grady denied an appearance before our party's screening and vetting committee and has absolutely NO affiliation with the Richland County Democratic Party or any organization associated with the R.C.D.P.," Weirich said in a written statement.

Grady told Richland Source the local Democratic Party had not contacted him about its decision.

"I didn’t have high hopes about getting any kind of support from them to begin with," he said. "It’s amusing to see the local Democratic Party immediately sour on their 'vote blue no matter who' refrain.

"The fact that they feel comfortable turning away a candidate who did the leg-work to garner over a hundred votes in a write-in contest and secure a place on the ballot, might speak to the larger problems in the state party as a whole," Grady said.

"It’s not my fault they couldn’t be bothered to put a candidate forward who they liked. But I understand the difficulty in recruiting what would normally be sacrificial lambs in a 70-30 Republican district. Candidates are already too controlled by parties instead of the people. I’m sorry they didn’t like me stepping up the plate," Grady said.

Weirich on Tuesday evening declined additional comment. It's not known to which specific comments the party objected, though Grady pointed out a post that labeled him as a member of antifa.

"Antifa is not an organization. It's been treated as a fringe-right boogeyman for years. Trump's attempt to label this amorphous philosophy/tactic as 'terrorist' is really just an attempt to criminalize resistance, the first amendment, and free assembly," Grady said.

"Antifa is Anti-fascist, and I am absolutely anti-fascist. This obsession with antifa while cops are murdering black people and the president is infringing on the constitution is laughable."

"The original poster is, of course, in on the joke. I shared it (on Facebook) to mock the absurdity of the far-right and their willingness to believe anything while they obsess over identifying 'antifa' members. That so many did take it seriously is sad and a sign of an increasingly polarized nation," Grady said.

"A few days ago, antifa wasn't on anyone's minds, people were simply demanding justice for police brutality and the murder of George Floyd. Then Trump decided he needed to distract from his feckless response and a grassroots demand for civil rights by pointing, once again, to a made up boogeyman," he said.

Grady said he didn't believe he didn't need to be recruited or "vetted" by the Democratic Party.

"Mine has always been a totally grassroots, people-powered campaign. I don’t see why I should have to receive party approval first before running. Otherwise, what are the primaries for? However, I do understand their reticence to endorse and wanting to better vet candidates, as they vigorously endorsed candidates they otherwise certainly should not have in the past," he said.

The country's founding fathers were imperfect, but they created a set of principles that set the stage for freedoms unequaled in the world, an Ashland University professor told Richland County Republicans on Monday.